An 'experiment' with left over levain

An 'experiment' with left over levain 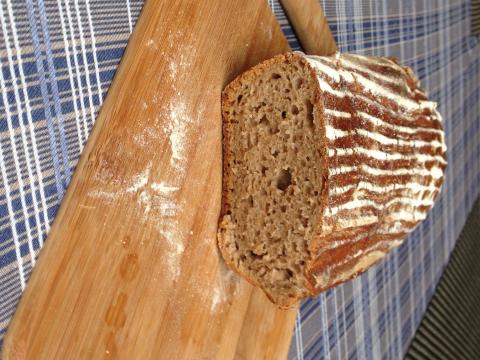 I hadn't baked for a while and decided to make Field Blend # 2 form K. Forkish's FWSY.

I prepared the levain using 100g active rye sourdough starter and used Red Fife flour instead of the wholewheat.

Then I realized that the recipe calls for only 360g of the levain, and that 640g would be discarded.

Dang! As others said this sounds incredibly wasteful. So I thought of using the 640g of leftover levain.

It had risen nicely over 7 hours or so and looked almost like a poolish.

I took the 640g, added 100g Red Fife flour, 100g dark rye flour., and 160 g H2O. This gives an almost 80% hydration dough I believe. I did four S&Fs in th bowl over the next hour and let the dough rest for another hour. It was very slack and pretty much impossible to shape. I slid it into an oblong banter and placed it in the fridge overnight. I baked it straight out of the fridge in an oblong cloche. I didn't slash it. It came out pretty nice and it takes excellent.

In the future I'll think a bit more ahead but this 'experiment' turned out rather well.

(As an aside, I don't know what I'm doing wrong. I took this picture with an iPhone and for some reason the picture is rotated when I upload it. Any suggestions?

Wasting seems so, well, wasteful. You made excellent use of your excess resources and your bread turned out beautifully!

I can't help with the pic, though we've seen it happen before. Maybe other iPhone users will offer their solutions...

for a loaf of bread...... had to be tangy indeed!  You can also stiffen up a bit with flour, chuck i in the fridge and use it for levain in another bread any time.  i hate wasted food of any kind.  Well done and happy baking

It looks really good! How does it taste?  Could you share more about the flavor profile? It's very interesting! Being brave in the kitchen sometimes really brings recipes and techniques to treasure. Thanks for sharing!

About the photo, taking "horizontal" rather than "vertical" photos is a good way to go because iPhone photos tend to favor that orientation when uploaded, in this way the photos are already in the "favored" orientation so no rotation will happen anymore. If you have a Microsoft Office Picture Manager, you can rotate your photos there to get you're desired orientation along with some editing and re-sizing features; that's why I do now though you can always re-size when you insert the photos in TFL. Finally, you can upload it on facebook where you can rotate it on the "edit photo" feature, download the rotated image and upload it on TFL; though it's more time consuming, that's what I do before when I'm still using my old laptop that doesn't have picture manager. These are just my ways of "solving the problem" but there are more or even better ways, I'm sure. I hope I helped you. :)

I find the taste hard to describe. My wife called it 'hearty', probably something that you wouldn't put marmalade or jam on. The sour taste has become a bit more noticeable after the first couple of days but not overwhelmingly so. The crumb is really nice and chewy. I do like it a lot.