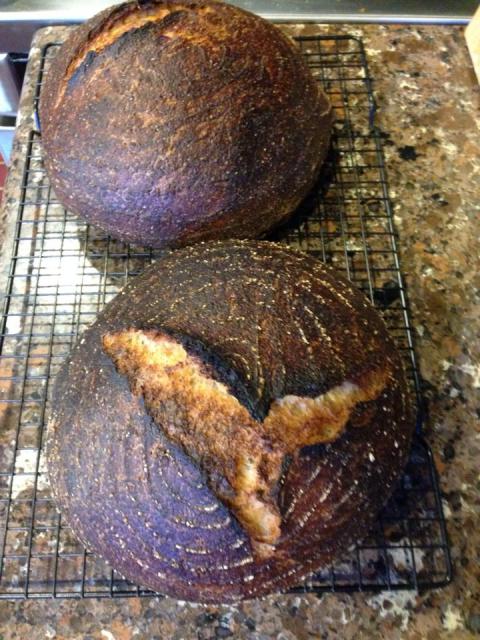 Been baking from Ken Forkish's Flour Water Salt & Yeast, and I decided it was time to keep better notes of what I was doing so that I know how to consistently get the bread I love.

Let me start off for the record saying that while this bread is fantastic, I won't be following these procedures again, unless I can't get an equally great bread doing things correctly...

Because Forkish recommends making a lot more levain than is called for in the final dough, last week I decided to cut the levain formula in half.  By the way, I don't "refresh" my starter. Last week, I took 25 grams of week old starter (1/4 of what he suggests using) and add it to 25 grams of White Whole Wheat Flour (freshly ground), 100 grams AP four and 100 grams of water.  However, when I wrote this down in my notebook, I erroneously wrote down 100 grams of White Whole Wheat.

Accordingly, my levain was very stiff, being at 50% hydration. It seemed awfully stiff, but it was 8:15pm, after a long day of work and I meticulously followed my notes so I figured I must have just had a bad memory for what the leaving as supposed to feel like.  Though, I knew in my head that something was wrong, I went to bed shortly thereafter, and when I woke up early saturday morning, I looked back at the book and saw my error.

Here is where it gets tricky... to "fix" the problem, my first reaction at 6:30 in the morning was simply to remove 75 grams of flour from the final dough.  However, I had already mixed the white whole wheat and AP the evening before, so I could not simply remove the whole wheat.  After removing 75 grams of flour, I held back some of the water from the autolyse step, figuring I did not need so much water now that I was hydrating less flour.

This caused me to rethink things, and I realized that when I added 216 grams of the levain, I was going to wind up with a lot more flour since it was only 50% hydration.  So I had the brilliant idea of adding 120 grams of water to the starter to get it the right hydration.  For those who do not know, you can't simply add 120 grams of water to 50% hydrated dough and expect the dough ball to hydrate properly.  Oh boy, what to do?

Next, I just decided to mix up the water and the dough ball, almost like dispersing my 325 grams of levain into 130 grams of water.  Mixed by hand and broke it all up (after the kneading thing clearly was not going to work, and I had a soupy levain by the time my dough was nearly done autolysing.  Meanwhile, I started thinking about the math and calculated, whether rightly or wrongly, that when I removed 75 grams of the flour from the dough, and then added 130 grams of water to the levain, I wound up with too little flour and needed to add back in 55 grams of flour.  So, after the autolyses was done I kneaded in 55 grams of the removed flour and then added in the 216 grams of soupy levain.

By 6:30 a.m. this morning the dough was ready to come out of the fridge and the oven was preheated to 475.

When the combo cookers were preheated, I tried getting the dough out of the basket and it stick at the bottom/top pretty good.  Dough was misshapen but still in one piece, albeit flattish.

After removing the lid, and baking for 15 minutes or so, the bread was a very dark brown, so I lowered the temp to 450 for the remainder of the bake.  As you can see, they came out "boldly baked" which is a euphemism for burned.  And, yet.... they don't taste burned at all.  The bread has an excellent flavor. Crust is delicious and crumb is wonderful.

A successful bake despite the ridiculous contortions I went through.

So far, the notebook has been an utter failure, but that is because I kept poor notes and then followed them to a T without thinking.  I am sure I will improve at this all in good time.  Although I would never bake this way deliberately, one thing I will take away from this is that I can get the crust pretty darned brown and the bread is far from inedible.

That looked like a crazy bake, but the loaves look excellent. The crumb has great color to it, and the crust is so, well, bold.

I tried to follow along and I think I got the gist of it.  So all in all you made a brilliant save and the loaves really look stellar.  I suppose the only real change you need to implement is a stiff levain using increased whole white wheat.  Adjust remainder of formula and skip the "follies" and repeat said loaf.  If it works and you write it down i may give it a try since it looks and sounds great.

So, I had a stiff levain to start with but then added the water as noted to soften it up considerably, which made it easy to mix with the autolyzed dough.

Does that sound like a process one would usually follow with a stiff levain? If so I could wriite it up in a more ateaightforward way using the final formula. It would be slightly guesswork because I took out flour that was mixed and then added a portion back. But it wasn't much.  I think I will bake it by the book to see if doing it "my way" makes a positive difference in crumb, crust or taste.

Usually when using a stiff levain it is said to cut into chunks and work into the dough but I have held back some water to soften it up before doing this with some mixes as well as just mixing it in chunks.  I think the chunks is fine and dandy if you use a mixer but if you hand mix softening it up a bit does help get it incorporated more easily.  I don't see why this would change anything but maybe a more scientific mind would know.  If would seem the gluten that is there is going to get "mashed" up in the mix anyway but that would be my only guess.  To preserve the developed levain.

I love the color by the way and by no means is that too dark.  Perfect in my book

this week by having the temperature inadvertently way too high for way too long.  I have no Idea why yours was so dark though - It shouldn't have been....Nice save,  I always uses a very small amount of stiff starter to make a much larger liquid levain because it is so much easier to Incorporated into the mix after the autolyse,  Stiff is very hard to incorporate. - plus LAB and yeast  to a lesser degree love it wet.   I think this bake came out great inside and out.  If it doesn't taste burnt - it isn't.  Well done and

So, I made the 50% hydration levain the night before and hydrated it in the morning as my dough was autolyzing.  It wasn't a small amount because I made 325 grams of it before adding the water and then taking 263 grams of the hydrated stuff.  Obviously I wound up with more extra by adding so much water so I made waffles after adding a bit more flour to her slurry. So the whole process was a bit weird since I made a large mass of stiff levain from 25 grams of starter, let it sit overnight and then liquified it.

I may need to get an oven thermometer. It was perfecy baking at the 450 temp for the Tartine loaves but at 475 they really seem to go dark fast.

Despite all odds, the loaves are a success. I bet you learned tons from this experience (Not only how flavorful a boldly baked crust is).

Thanks for sharing, David.

One can make baking a LOT more complicated than it needs to be, but as long as you have a healthy leaven and a decent oven, with the right proportion of ingredients, great bread is never far away.

I think I went a bit overboard in making the formula my own and hesitate to call it a formula. "Combine flours, remove too much of the combined flours and set aside. Autolyse, them add back some of the removed combined flours. Say a prayer and mix the dough with the just-hydrated levain."

I would have thought you did a textbook bake.   Doesn't look burned to me - just delicious.  -Varda

Weekend baking is rough when I am trying a new formula. This bread is really delicious. I can't wait to try it again, closer to the textbook!

So far I nearly ruined it twice and got great results both times. I really do want to try it closer to how Forkish intended it to be baked though!

I know exactly what you had to go through!

Preparing my Saturday specialty bread for sale, Aroma Bread, I accidentally added way too much water, and ended up with a huge batch of "oatmeal". I almost threw it out, but didn't want to waste lot of (expensive) pumpkin and sesame seeds, so better sense prevailed, and, after some wee-hours-in-the morning calculation, I was able to reconstruct the dough to its normal consistency.

The Overnight Brownie is my favorite basic Forkish bread for all kinds of interesting variations, like the Pain au Levain de Seigle or the Einkorn Hazelnut Levain, Your loaf turned out very nice, and a "bold bake" is, after all, what he calls for.

To avoid the dough sticking to the basket - that happened to me too - slap the banneton with brutal force on the counter (that's what Forkish does!). I always use a parchment sling for an easy, burn-free transfer of the loaf to the DO, and smack the basket right on it.

Sorry to revive an old thread, but curious if you ever did try to 'repeat' this in a repeatable way? Bread looks incredible!