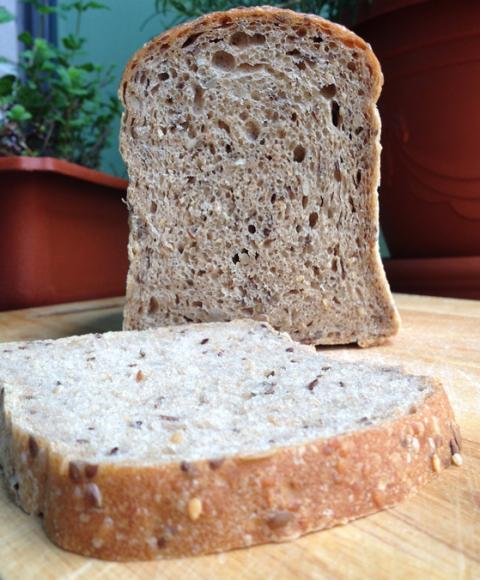 After bookmarking it more than a year ago, last weekend I finally got round to making Karin's Saatenbrot.  It turned out really good and was made extra special by the freshly ground bread spices which I roasted and ground up.  Not everyone in the family liked it, though.  They thought it too heavy and too strongly flavoured.  I had also baked them too dark (should have taken the baking stone out of the oven but didn't think of it) and consequently at least one of the loaves got slightly burned which gave it a hint of bitter.  I love bitter so that was fine with me but didn't sit so well with everyone else. :)

So I set about thinking how I could still keep the spirit of the bread, but lighten things up a little and make it my own.

Essentially, I cut down on the rye, halved the seeds (I didn't have hemp so I used sunflower instead) and added a tangzhong.  All these elements combined to make a light seed loaf, with a soft, moist crumb but with a firm bite provided by the seeds.  It makes excellent sandwiches but really comes into its own when toasted and lightly buttered.  The seeds get an even nuttier flavour.

I made the preferment, the soaker and the tangzhong in the morning.

To make the tangzhong, mix 40g of flour with 200g of water until lump free.  Over a low heat bring the mixture up to 65 degrees C whisking all the while.  It will start to look like glue. Remove from heat immediately and keep whisking for another minute or two.  Allow to cool to room temp and refrigerate until needed.

*  I used this recipe which I found on the internet to make the bread spices.  It consisted of:

I mixed up the final dough in the afternoon when the rye preferment had peaked.  The dough was really sticky at first and I had to knead for about 10 - 12 minutes by hand until it got to the point where it stopped sticking to my hands and the counter.  That was somewhere between 600 and 800 slap and folds (Bertinet style).  Eventually I even managed to pull a decent windowpane from it.  I let it relax for about 20 to 30 minutes and then shaped it and put it in the loaf tin.  I was going to bake when it had proofed fully but had to go out for four hours so it got refrigerated and was baked later that evening.  I forgot to take it out of the loaf tin half way through the bake and it was only taken out for the final ten minutes.  This accounts for the somewhat pale sides as opposed to the nicely browned top.

Here's another shot of the loaf from a slightly different angle and the clouds playing funny with the light.  Unfortunately I cut the loaf before I considered taking pictures of it so I don't have any of the uncut loaf. 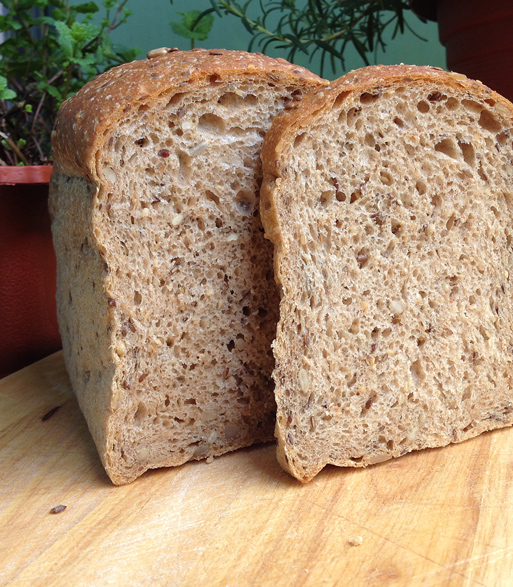 Nicely baked. I do love hemp seeds and recommend trying them in the next version.

Have never tried hemp seeds and was a little apprehensive/embarrassed about asking around for them lest someone suspected my reason for acquiring them!  Now that you have recommended them, I shall be braver and ask around for them. :)

Hemp Seeds are readily available on Amazon, but if you don't want to buy food through the mail, your best bet is to go to a health food store or a Whole Foods (if in the U.S.) where you should be able to find them.

You summed it up perfectly, Janet; a soft, seeded, sandwich loaf.  Actually, another reason for wanting to change the formula was because I found I was getting indigestion after only two slices of the original recipe.  Not sure if it was the amount of seed in it or if the culprit was a particular seed (like flaxseed) but it gave me heartburn.  Haven't had the problem with this loaf.

Thanks for commenting Janet,

Almost 2 years since you posted this loaf.  I finally got to it as it was buried amongst my 'to bake' projects.  Luckily it was not lost forever because the loaf turned out to be a splendid loaf and will be one that I will bake on a somewhat regular basis.

As usual, I did tweak despite the fact that I know you produce great fail proof formulas in your kitchen.  It is a habit of mine.  Hard to break.

I used txfarmer's 30% rye sandwich loaf as a base but I even tweaked her formula to include a roux, standard for me when I do a sandwich loaf with my whole grain loaves, and I lowered the rye to 20%.  I also dropped the seeds down to 15% total due to the weight already inherent in my loaves given the bran and germ are included. I omitted the spice component knowing my family prefers 'plain' loaves or ones that contain cinnamon.  (They are spice selective :) I used my firm leaven but also included 0.1% IY due to timing of my day and oven capacity.  Loaf was bulk fermented overnight, proofed and baked on the following day.

The end result was a soft sandwich type loaf with a splendid aroma due to how the seeds and the rye complement each other.  I take it that my family approved of it since there is only 1/2 loaf remaining in the bread box and the loaf was baked yesterday….no complaints have been uttered so I consider that a 'successful' bake.

I would include a photo but it would be redundant.  My loaf came out of the oven looking just like yours but the crumb was a bit darker.

Thanks for posting this loaf.  My only regret is that it took me so long to get around to it.  Good things are well worth the wait.

What a gorgeous open crumb and loaded too!

Though I'm not eating any grains at present.  I love your beautiful sandwich loaf and I have post marked it.

Thanks Sylvia!  Hope you are able to eat grains soon.  I still use your steaming method even though I scorched a pair of towels once! :)

I like that you used both a preferment and the TZ.  Sometimes nothing beats a good sandwich loaf.

Thanks emkay. :) Yes, it is obviously not as strongly flavoured as Karin's original formula but it still has a lot of flavour from the rye preferment.  The tangzhong adds  tenderness and moisture and the seeds bring even more moisture.

Beautiful bread Syd.  You can't please everyone but this sure looks like a winner to me.

Fortunately everything worked out smoothly the first time so it can go straight into tried and tested.  Everyone liked this one too so I will definitely be making it again.

if there ever was one!  I liken the changes you made to the original formula too. Love everything about this bread especially the TZ.  Well done and

Thanks DA.  It rose higher than I expected.  Probably something to do with the TZ and the extensive kneading.

All the best DA,

Syd, I love your sandwich breads and have tried to bake a few of them.   Nice customizing for your family.   The concept of bread spice is still a bit foreign but this looks fantastic.   -Varda

You could leave the bread spices out if you don't want them.  I left them out the second time I made it and I prefer it without them.

Can't wait to hear more about how it is going at the market for you.  Do post when you have time. :)

That looks superb, Syd! Tall and soft, and full of seeds.  can't get much better than that.

Thanks Khalid.  I was very happy with the way this one turned out.