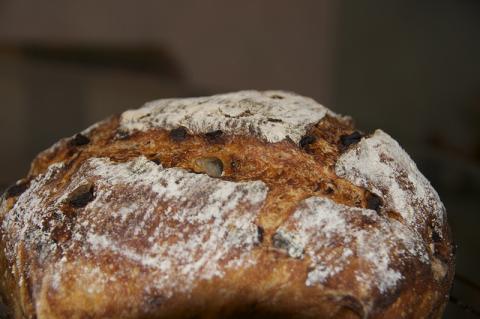 This Formula is from one of the greatest bread book "BREAD" it has been on my baking list for so long, as im too lazy to dried apple myself i have been putting it on hold till my dried apples supplies arrive.

I mixed it all with a little bit of liquid levain the night before i retired, it took around 8 hours to double and ready to go.

1) combined all ingredients except salt, yeast and dried apple.

3)  Add Yeast and Salt and mixed with Pincer Method. Its fully incorporated with another 10 in bowl S&F.

Divided into two piece and pre-shaped it into a boule. I was gonna let it rest for 20 mins, but I was too concentrated on my fishing games. It ended up with almost an hour on the bench.

30 mins on the bench, I guess it must have something to do with the prolonged rest. at 30mins mark it already looked like its ready for the oven.

From the pic, one of them has a paler crust which I suppose is becoz of it has run out of food for my little yeast. 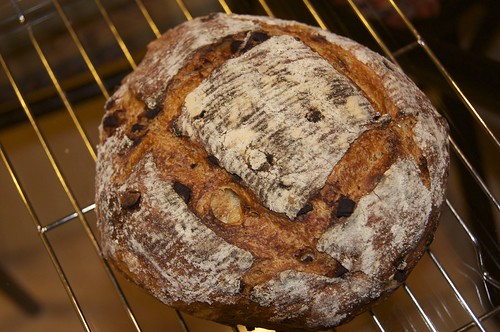 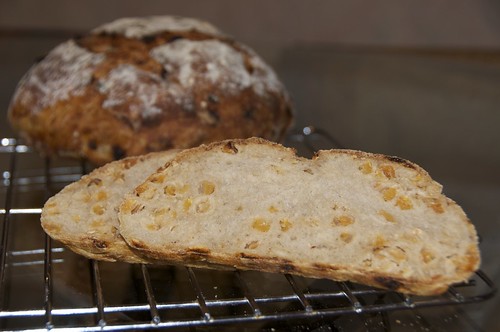 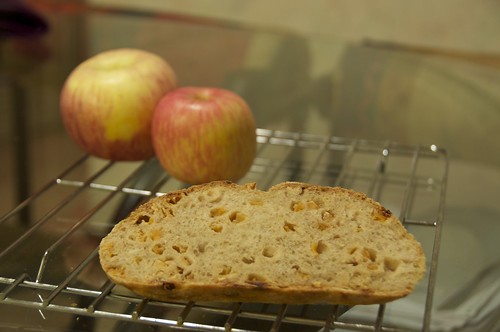 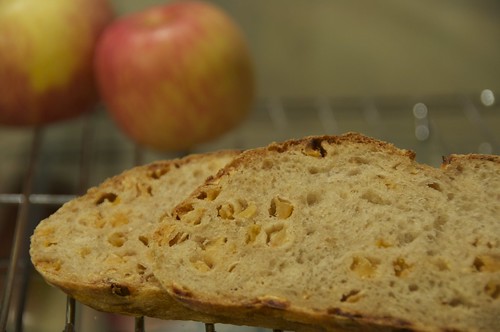 Nice Job on this recipe, Cecilia!

I'm curious as to what protein content does your bread flour have? a 90% bread flour bread at 68% hydration should be taller and less flat. Yours indicate that extra water was added, am i right?

Love your talent in baking, your bread baking skills are improving so fast!

thank you for ur kind words its flattness is due to the flaw on my shaping. I'm still having problem with shaping with that much of add in. SIGH!

The one scored with a tic tat toe in the pic should have a better volume as I have change the way I shape a boule from one used in tartine to the one used by jeffery. Which I think is easier when it comes to a dough with such low hydration.

also u are right about the hydration. I've up it to around 70% while replacing some of the bread flour with all purpose (11%) I think it must have sth to do with that as well.

Thank so much for ur encouragement. I'm gonna hit the ground l and work on a baguette for the next couple of weeks to improve on shaping skills

You really have gotten a hold of this bread baking stuff.  Turning out stunning loaves all the time now.  Last time i tried an apple bread it was delish but i used fresh and incorporating was tricky as the wet apples didn't want to blend in the dough.  I've been meaning to re-try with dried apples and now I remember.

what about reducing the dough hydration by 5-10% with duo apple half dried n half fresh? Instead of diced apple we can have shredded apple.

Havering it dried brings a different flavoR to apple n the bread.

Beautiful looking loaf.  I will have to look this one up and try it one day.  My wife would love it...me...not a big baked apple fan.

Baked apple!! U remind me of my most favorite apple crumble!

even though it might have been over proofed a bit.  No harm though and I'm sure it was tasty.  Well done and happy baking CeciC

i always have issues with over proofing them!