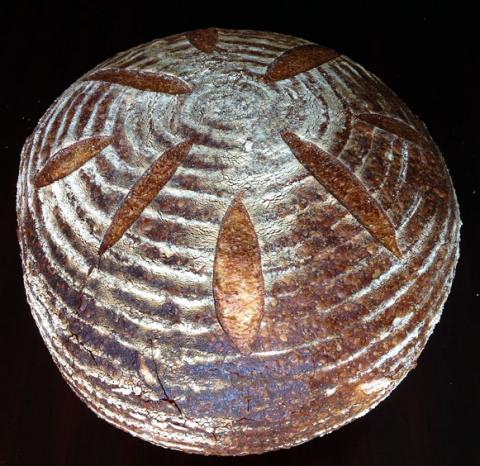 This is my version of Pain de Campagne.  It took three attempts before I was satisfied with the result.  The first two loaves were too sour for my liking.  It was only when Josh suggested that I use more starter in my levain build, instead of less, that I finally got the result I wanted.  :)

Allow to peak.  Once it has peaked and started to recede, it will get more and more acidic.  I wanted a young levain for this loaf so I used it when it reached its highest point.  This took somewhere between four and five hours in my 28 degrees C kitchen.  It had a nice fruity aroma and wasn't at all sour.

Disperse the levain in the water with a wire whisk.  I like to whisk it up until it has a good foam on top.  Next, whisk in rye and malt powder.  Then add bread flour with spatula and mix until all the flour has been moistened.

Put into well floured banneton and after about half an hour cover and:

The proportionately large amount of levain in this recipe means that the dough develops really quickly hence the relatively short bulk fermentation time. 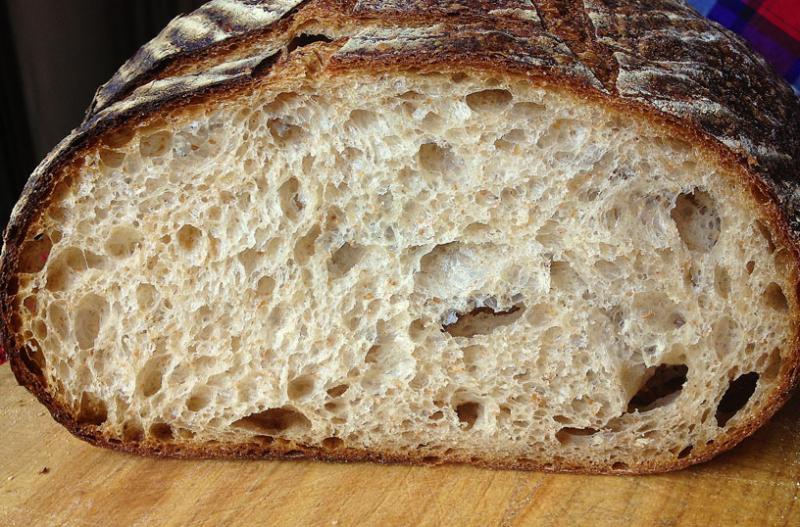 For the first two attempts I used smaller amounts of starter (30 and 20g respectively) and let the levain ripen for 12 hours.  As Josh suggested, this made for a more sour levain.  So more starter and a shorter ripening time is what he recommended.  It worked really well and I am really pleased with the way this turned out.

The flavour of this bread improves with time and by day two (yesterday) it had a slight tang.

Love the bold bake and the open crumb  Can't get much better than that except we would go for more sour instead of less with the levain seeds being smaller :-)  Well Done and

Personally, I prefer the darker bakes with a more wheaty flavour and a less pronounced sour but some of my bread eaters prefer it the other way round: lighter, thinner crusts and more sour.  It just goes to show: you can't please everyone. :)

I'm in the midst of baking off my PDC re-do with the proper hydration (82%).  That loaf looks stellar.  it's actually just 16% pre-fermented flour which is pretty average.  And 25% whole grain.   Lovely crust and crumb.

First set of loaves is out of the oven and about to load some more.  My dough is a bit different.  It's 53% whole grain (43 wheat, 5 rye, 5 spelt)  Along with fixing the hydration I opted to split the wheat half red wheat and half white wheat along with a 4 hour autolyse to balance the bite of the wheat/spelt.  I'll post later.

Happy to see all went so well

Thanks for your advice Josh.  :) I turned out just the way I like it.  Not sure what the hydration of this loaf is.  I haven't worked it out.  It is more than 75% if you include the levain but the dough doesn't feel overly wet.  It comes together quite quickly.  How did you work out the percentage of prefermented flour?  i would have thought it was 40%.  (i.e. 200/500 * 100) or is that not how you work it out?

Looking forward to seeing your PDC's.  Have never baked with spelt as I haven't been able to get my hands on it over here but would love to try some.

I assumed your starter was 100% hydration so it works out like such:

Josh, Thanks for working that out for me. I see how it works now. It is the amount of flour in the preferment as a percentage of the total flour. I was including the water in that equation. I like the way you laid it all out. Think I will use your method next time.

I lay out a formula but some consider the weight of levain to the weight of total flour.  It's all relative I suppose.  Some don't include the levain as part of the hydration/flour which confuses me but again just a different way to look at it.

50 is to keep as mother dough.  So that is removed from the overall formula.  Thats the extra 25 of each you are seeing.

Josh is correct.  I only used 200 g of the leaven in my final dough.  So the 50 g from the seed starter was effectively removed.  However, I didn't use it to keep as my mother dough, I just discarded it.  I keep my starter separate from my leaven.  It's for insurance reasons. :) What if the cat knocked over the entire bowl of leaven and it was all soiled?  Or some other unforeseeable disaster?  It would mean that I would have to make a new starter all over again.  In fact I have two jars of starter that I keep in the fridge.  Although they are fed slightly differently, if something terrible happened to one, I would still have the remaining one from which I could build again.

I guess I should try learning to read :) !!  Sorry for my stupidity...I must be getting too much sun...

in your crust.  I can just hear the bread sing.  I am definitely going to try out your formula for PDC. I am always trying for more sour in my breads so I plan to do all the things you mentioned but the opposite. :)

If you like more sour, then allowing the levain build to go on for longer definitely seems the way to go.  You could aslo add some rye to the levain.

Thanks for commenting Mary,

You put a lot of thought and care into this bake and it certainly shows. Lovely crumb. Looks delicious!

Yes, it did take a fair amount of obsessing!  Fortunately, it wasn't that much work, though.  I knew from the outset the flour percentages and recipe proportions that I wanted.  The only thing that changed was the method of the levain build.  However, I did reduce the amount of malt from 1 tsp to 1/2 tsp.  1 tsp was bordering on the crumb being a little gummy.

I'm interested in your thoughts about how to use WW and rye in a multigrain bread. I'm going to have to play with this. Thanks for sharing!

Well, yes, those are my personal feelings.  Not sure how scientific they are though! :) Would love to hear other's opinions.  There was a lot of flavour in the raw dough of this loaf. It didn't really need the 12 hour retard and could have been baked after a second rise at room temp. or a shorter retard.  In fact, for the first two versions, I only retarded for six hours because I thought they were going to collapse on me.  I did leave them out longer before retarding though.  I think I left them out for more than an hour.

What a beautiful loaf.  I love the scoring and how evenly the loaf 'sprang' in the oven….and then the dark crust that would make my neighbor drool.  She loves boldly baked loaves and is the one who educated me about their merits.

Thanks for sharing what you have been up to in your kitchen.

It did take three attempts. Although outwardly the loaf didn't change much, the third attempt was the least sour and the darkest bake.  I find if I change to convection after finishing the steaming part of the bake, I get a darker crust.

That is one handsome looking loaf, Syd, Super beautiful!

Nice working on Josh's advise. I think that this should be a keeper recipe.

Will definitely be making this one again.  The amount of dough it makes (slightly over 1kg) makes for one large boule that lasts about four days.  That means if I bake on Sunday, I have bread for most of the week.  Larger boules seem to keep better than smaller loaves.  They don't dry out so quickly.

Hope things are going well with preparations for your next market day,

Beautiful loaf Syd.  You achieved a perfect crust and crumb and a great oven spring.

Thanks for sharing your final result.

Thanks Ian. :) Hope you are keeping well.

Syd:  I made the Pain de Campagne today.  Really wonderful recipe.  Will continue to improve on my execution when I make it again!  Thanks for sharing. Best,  Phyllis

Phyllis, sorry for some reason, I missed your post. :(

That's a real beauty you baked there.  Your crust color is consistent with what I got and so is the crumb.  I am sure there is a lot of flavour in that crust of yours.  What did it taste like?  Thanks for posting Phyllis.

Syd:  It was very light.  My husband really enjoyed it.  I am baking another right now and will probably do a blog. Thanks again.  Best,  Phyllis