This is my third version of a whole wheat, multi-grain bread based on my San Francisco-style Sourdough formula. I think this one is a keeper.

Compared to the last version: 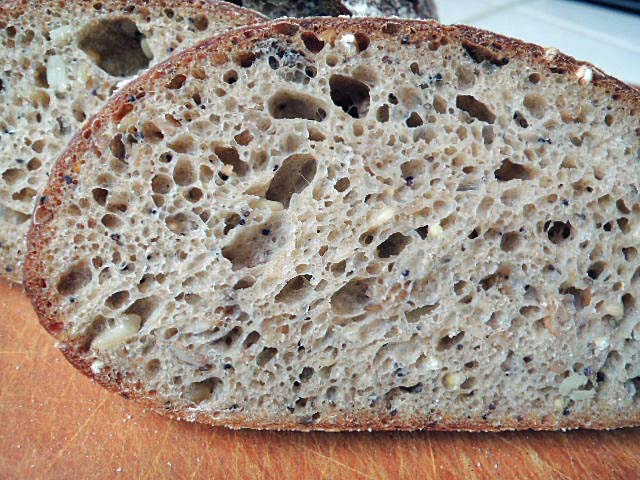 The crust was chewy. The crumb was not at all gummy but was very moist when the bread was first sliced the morning after baking. The flavor was that of good whole wheat. There was little noticeable sweetness. There was a moderately prominent sourdough tang. The bread was tasted plain and toasted with almond butter and jam. It was quite delicious. Probably because I was tasting it about 16 hours after it was baked, the flavor was more balanced than that of the last version which I first tasted just 2 to 3 hours after it was baked.

I will be tasting this bread over the next few days. I expect it to stay moist for at least 3 or 4 days.

Yesterday, along with these breads, I also baked a San Joaquin Sourdough bâtard. 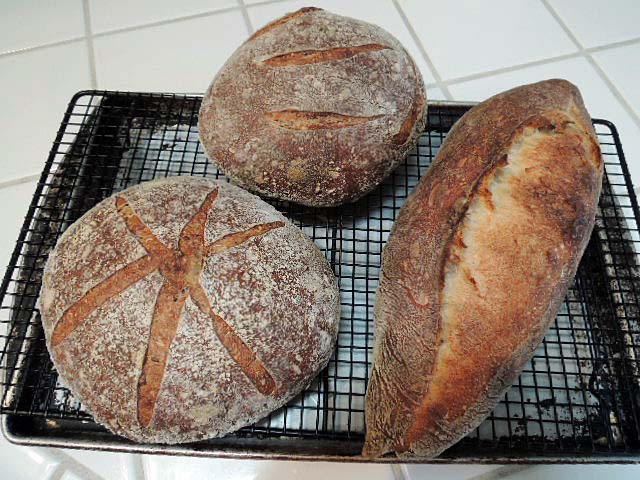 And I used 400g of the SJSD dough to make a focaccia with garlic, fresh rosemary and zucchini. 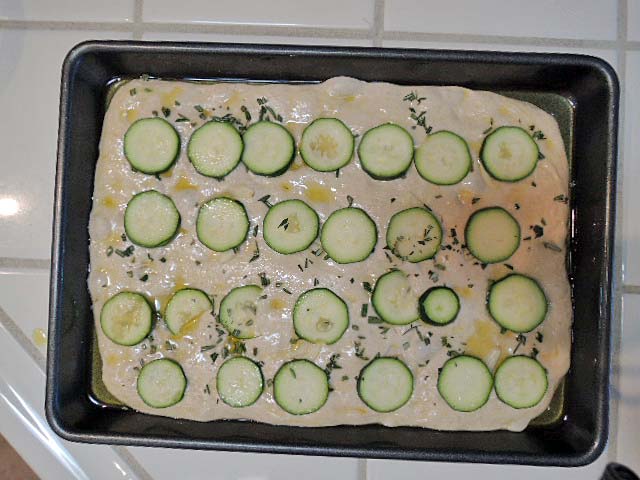 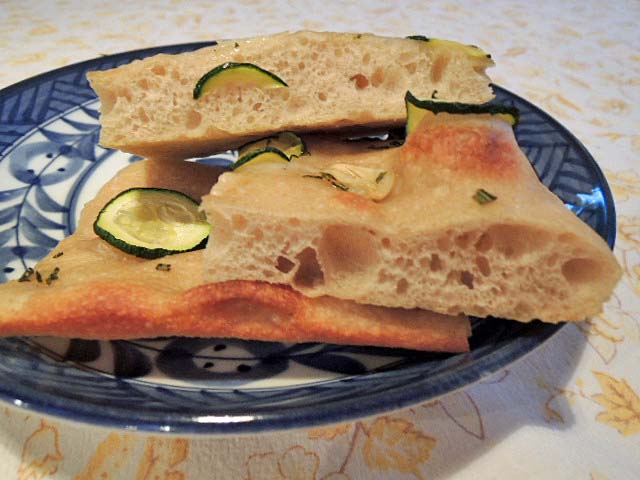 Lovely, David.  May I feature this for a bit?

Of course, I'd be honored to have you feature it.

This also reminds me that I took an advanced baking class this week (will post about it soon) and we made a loaf nearly identical to the one I'd made at home the day before but it included a soaker of cracked grains at about the same percentage as you have here.  I tend to be skeptical about "adding stuff" to my bread, but it really was quite excellent. It made my previous loaf taste... flat.  So there is yet another dimension for me to explore and learn about.

I admire the  adventurousness of those who try unconventional ingredients, but most don't appeal to me. The exceptions are grain/seed mixes, which are both nutritionally beneficial and tasty, and nuts and dried fruits, which I also enjoy occasionally.

If you want to experience a variety of reliable formulas with various soakers, Hamelman's various multi-grain and seeded breads are delicious.

Thanks for the tip.

What a wonderful crumb for 50% wheat.  How is the sourness of the loaf?  I imagine this one will improve with a little age as well.  With such a short soak do the grains have more bite this time around?

I would say this version is a bit more tangy than the others. I have made other sourdough whole wheat breads in which the sourdough tang and the whole wheat flavors seemed to clash. Somehow, they complement each other in this bread.

The only component of the grain mix that had noticeably more "bite" was the flax seeds. Note that there are no whole wheat or rye berries; they are flaked. There are oat groats and millet. They get rather lost as part of the "background." This is not a bad thing. The melded flavors are delicious.

kind of bread we try to make because it tastes so good and is so healthy....just can't seem to get that open crumb though.  The taste has to be wonderful with the whole WW and soaker.   We try to make them as sour as we can :-)  Just love everything about this bread.  The SJ looks spot on and has to taste pretty good too,

Looks and sounds great.  How do you make the starter?  Ingredients and grams?

I assume you are not asking how one develops a starter from scratch. So, assuming you already have a healthy, active starter, here is how I manage mine:

When preparing to make bread, I generally refresh the starter as a liquid starter at a ratio of 20:50:50 (Mother starter:Water:Flour) using the same flour mix described above. This is fermented to peak activity at room temperature (generally about 12 hours).

This refreshed liquid starter is then fed again according to the specific formula I am following. In other words, the degree of hydration, the flour mix, the ratio of levain:water:starter and the fermentation time and temperature are variable.  When posting a formula, I specify these variables.

I've learnt a lot from TFL and I'm happy to say that most of  the things I've learnt come from you.  Thank you very much David

Well, if you eat more at a meal, you don't get hungry again as soon. If you give yeast more flour, you don't have to feed them as often. (Note that, whatever ratio of starter to water to flour you use, your starter will be happiest if the feedings are consistant.)

Regarding converting a firm to a liquid starter: Well, of course, if you take a 100% hydration starter and use it to make a 50% hydration starter, and you want to be very precise, you need to adjust the amounts of water and flour just a bit. Of course, after a second feeding as a firm starter, the hydration will be very close to 50%.

If precision is very important to you, please read this:

Converting starter hydrations: A Tutorial. Or through thick and thin and vice versa

I was curious about the bite as the soaker I use which is a hot cereal 9 grain blend (which contains wheat, rye, corn, flax, etc..) is unpleasantly crunchy if not soaked for at least 4 hours(even better overnight).  You mention some Whole Wheat Sours you have made clashing in flavor.  In those recipes is the levain wheat based?  I know when I make my levain with wheat it is much more "ripe" after 12 hours than a white based levains.  Maybe the Whole Wheat Sour using a white levain is what brings the perfect balance to the flavors.  So whats next?  Turn the SFSD into a Rye mutation? A Rye Sourdough with a grain soaker (and still a fabulous open crumb).

Very interesting questions about the starter. In fact, the breads I recall where I disliked the flavor were 100% WW and used a levain that was fed with 100% WW.

What a beautiful, grain studded crumb, David! Wow, this looks like an excellent multigrain wholewheat bread.

Which Whole wheat flour did you use?

i know this is a keeper, i already bookmarked this post!! thanks David for sharing and inspiring...

perfect crumb as always!! you must be a very observant and patience man. i've got a lot to learn :)

You are correct. Thanks for catching that. Serves me right for relying on an automatic table calculation.

David, thank you for coming up with such an enticing bread. I've got the levain ready and fermenting away -- will mix the dough tomorrow!