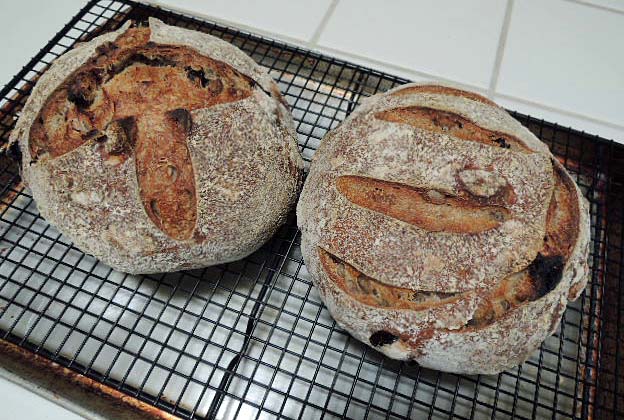 On March 3, 2013, I blogged about the San Francisco-style bread with Walnuts and Figs I had baked. More recently, SallyBR tried that formula, substituting dates for the figs and found it to be very good. Today, I baked another version this time substituting dried sour cherries for the figs. The formula was otherwise the same. The procedures were different only in my treatment of the levain which was adapted to my scheduling needs. 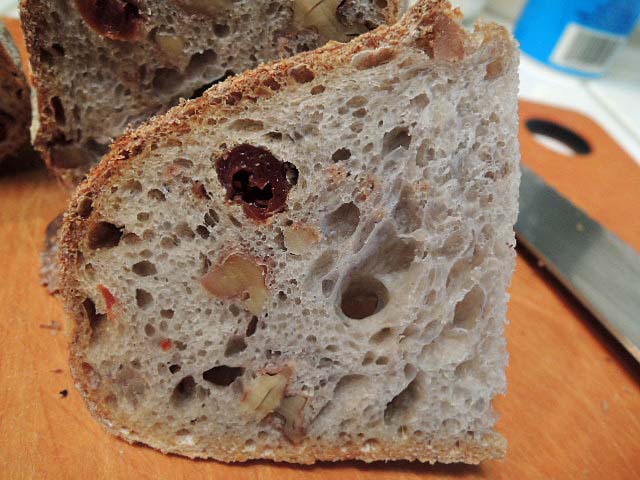 The crust was crunchy, and the crumb was chewy. The bread is moderately tangy. It is delicious with bursts of tartness when you bite into a cherry. This is a very good bread. Personally, I prefer the version with figs, but your taste my be different.  My wife likes the cherry version better, but she says, "I like them both. Yummmm..." My recommendation: Try both.

Looks tasty David.   I love cherries so I will have to try this done first!

It is tasty indeed. If you do make it, let us know how you like it.

David,   Looks like a delicious combo - sour on sour.  -Varda

It must be delicious. My wife, who loves my bread but seldom eats more than one slice at a meal, ate three slices for dinner last night.

Since our families live near Traverse City, MI, we pick up a 5-pound box of dried cherries any time we are in the area and running low.  They are great in scones, too.

Sounds great to me!

Never baked sour cherries in bread but it sure sounds and looks terrific.  Has to taste great too!

Nice to see this progression...from a solid lean dough base to the introduction of nuts and fruits.  The experimentation seems to be something we all do as human beings and it is easy to see how breads evolved into enriched doughs over time.  Fun to do and amazing to see the difference one item can make in the overall flavor.

A "stiff starter" is a sourdough starter which has a low hydration, that is, a low ratio of water to flour (generally 2:1, Flour:water), in contrast to a "liquid starter" which generally was a 1:1 ratio of flour to water.