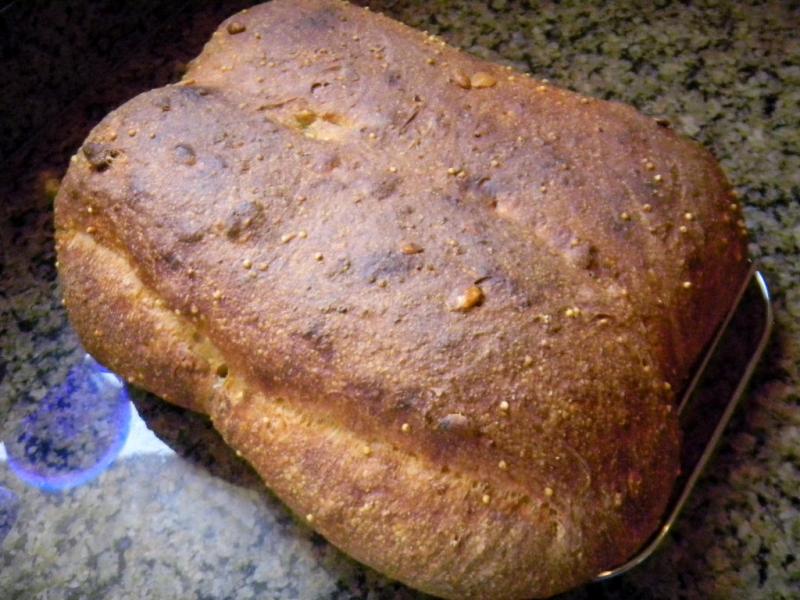 With David Snyder recent post of his new take on SFSD with higher amounts of Semolina and Ian’s new bread with semolina, it was only natural that another semolina bread would fit in this week. This one had a small amount of Desert Semolina - 150g.  We wanted to see if the high gluten, not just protein, claims were true. 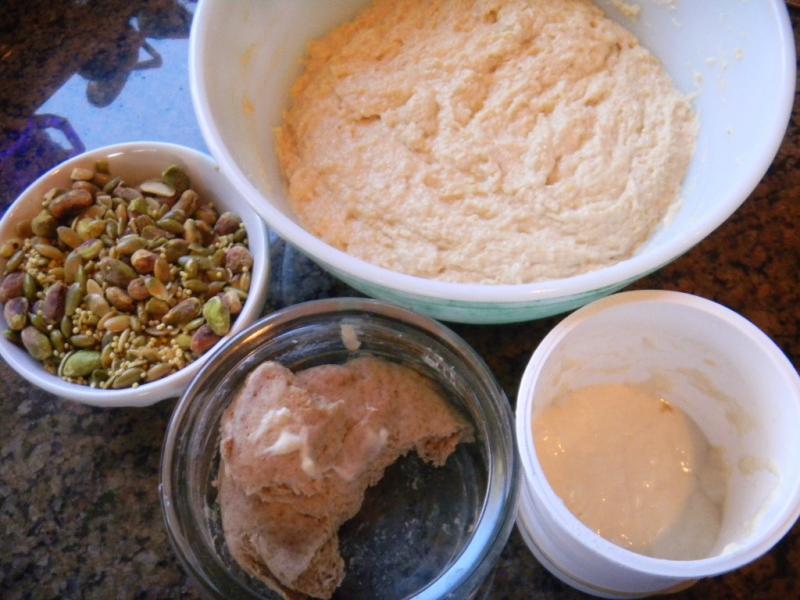 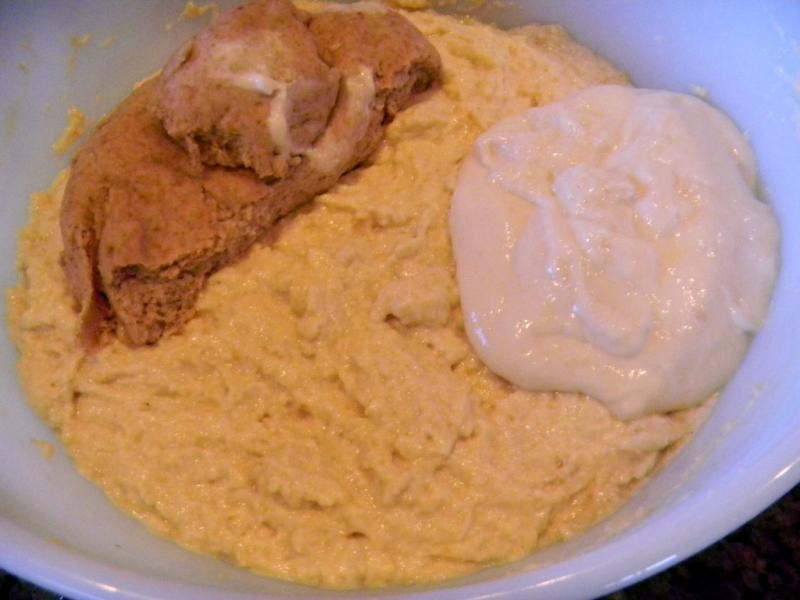 The bread has 35% whole grains that included millet, another yellow grain and Kamut a durum variety that has a yellow cast too.  We didn’t want the whole grains to take away from the yellow crumb color we were shooting for the Desert Durum.  The small amount of honey was there to sweeten the non yellow AP flour since the yellow ones are pretty sweet all by theselves. 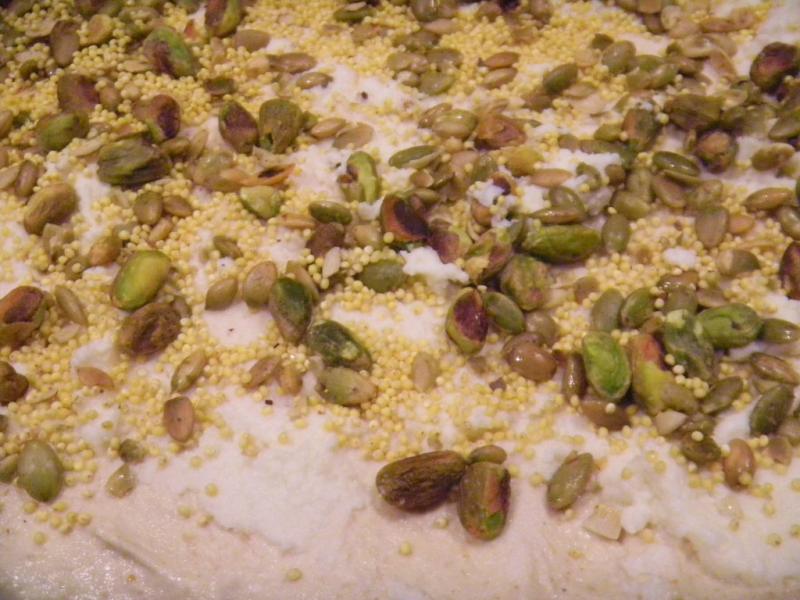 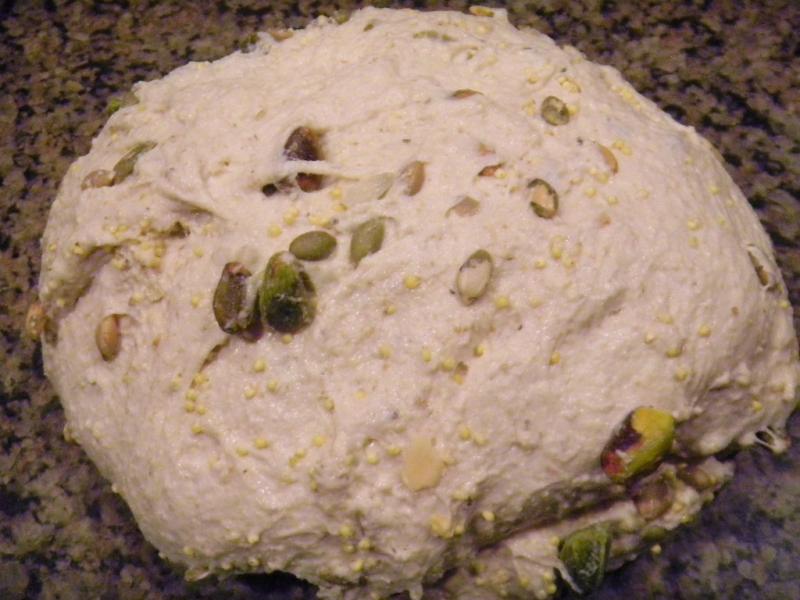 This bread was leavened with combination yeast water and mainly whole grain SD starters.   For the liquid in the dough we used the left over soaker water from our last 100% whole grain pumpernickel bread.  We added some ricotta cheese in keeping with this Altamura shape and Italian leanings of this bread – plus we are growing to like cheese in bread and the moisture it imparts to the crumb. 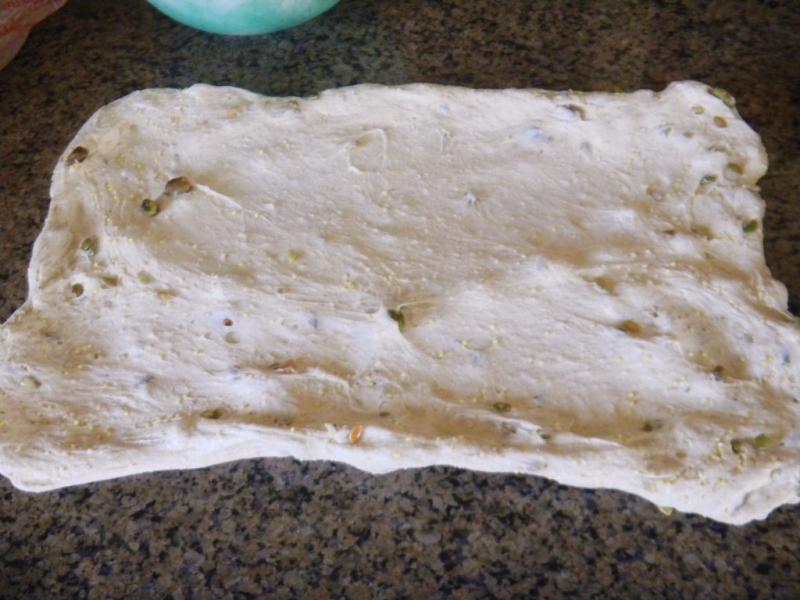 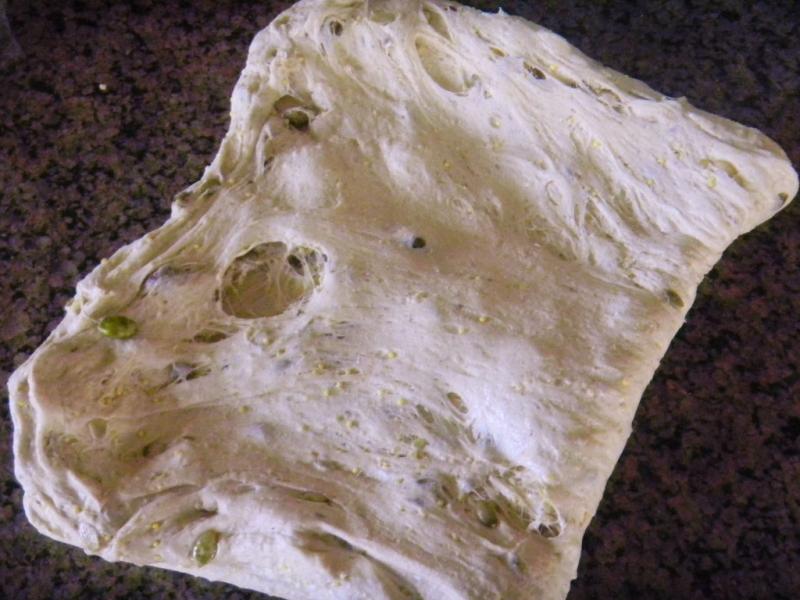 Since the color of the dough was yellow we thought green add ins would be appropriate and included pumpkin seeds and pistachios along with some millet seeds.  This bread isn’t as complex as some of the others we bake but it wasn’t meant to be since this is about as white a bread as we usually get around to making and we were getting low on white …..eeerrrr….yellow bread. 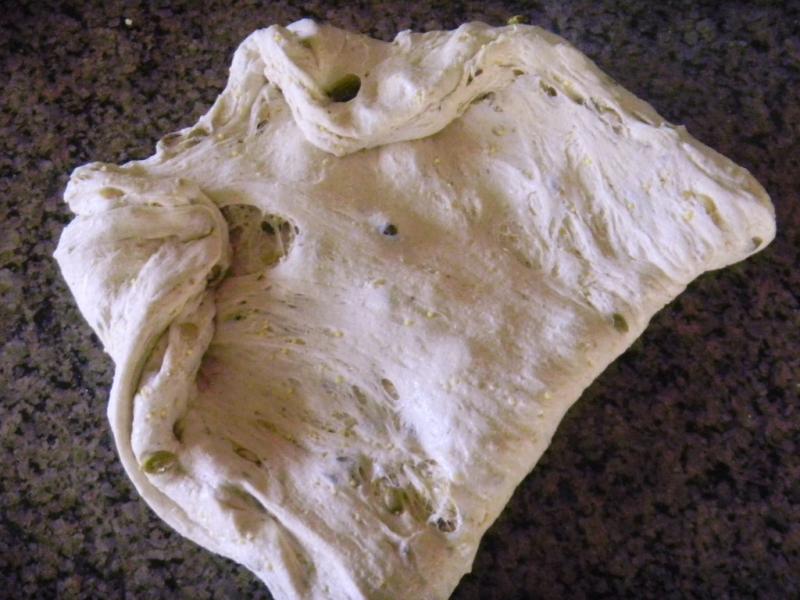 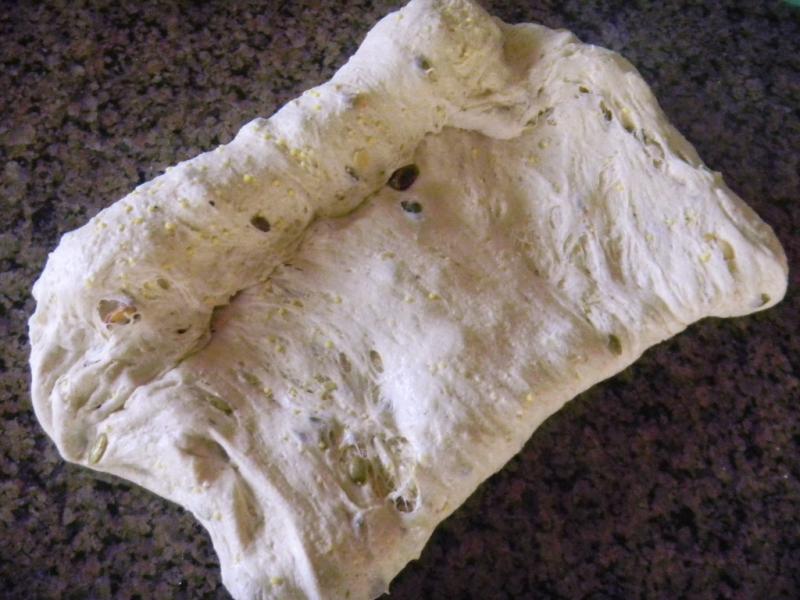 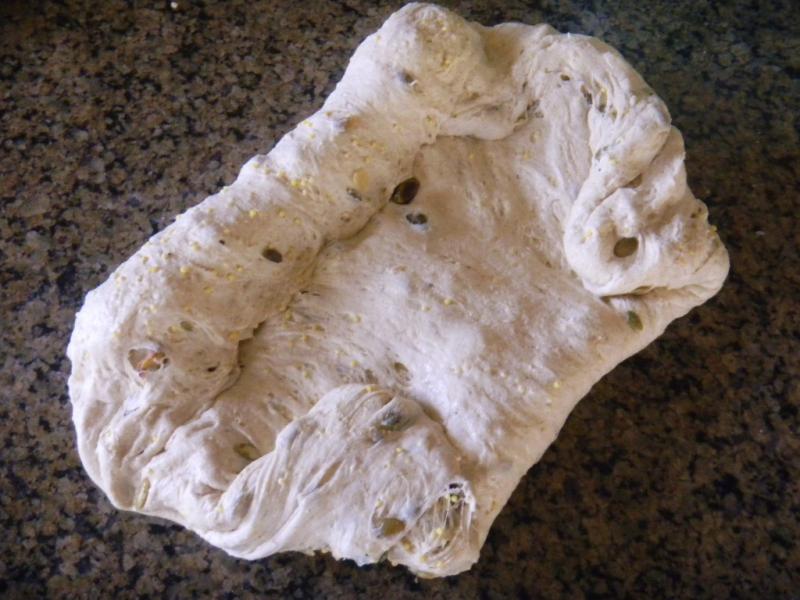 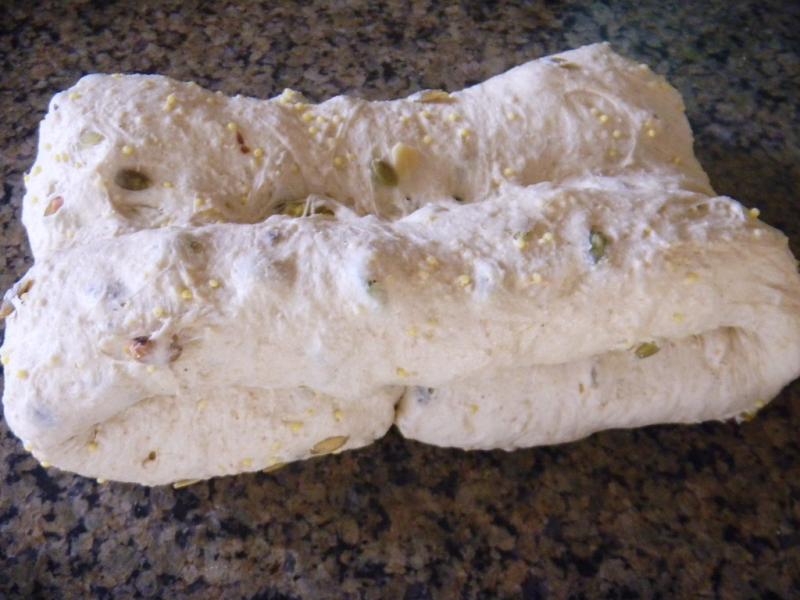 The levains were built separately over two builds and 8 hours.  The SD portion has spent a few days in the fridge before the final build to get it nice and sour.  The method is similar to or recent bakes but only this time only a 1hour autolyse, with the salt, was used.  We did 10 minutes of slap and folds until the dough was silky smooth and the gluten well developed. 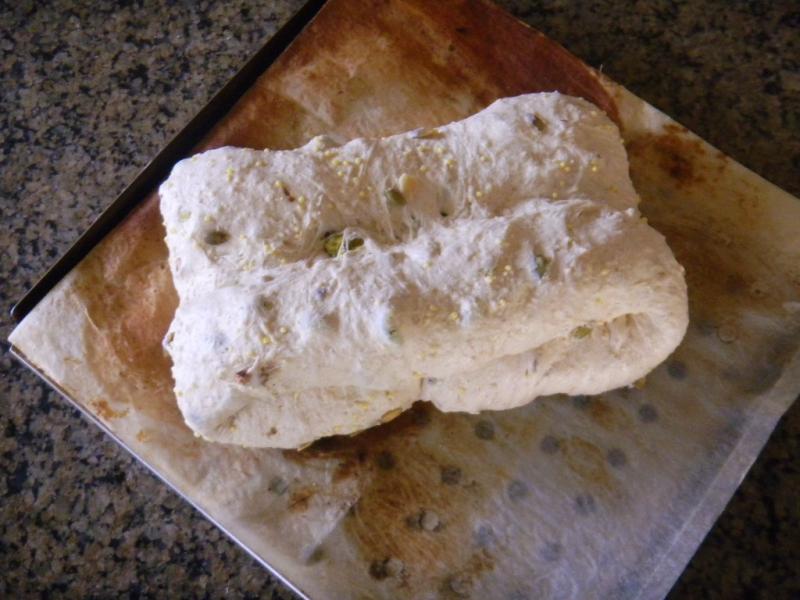 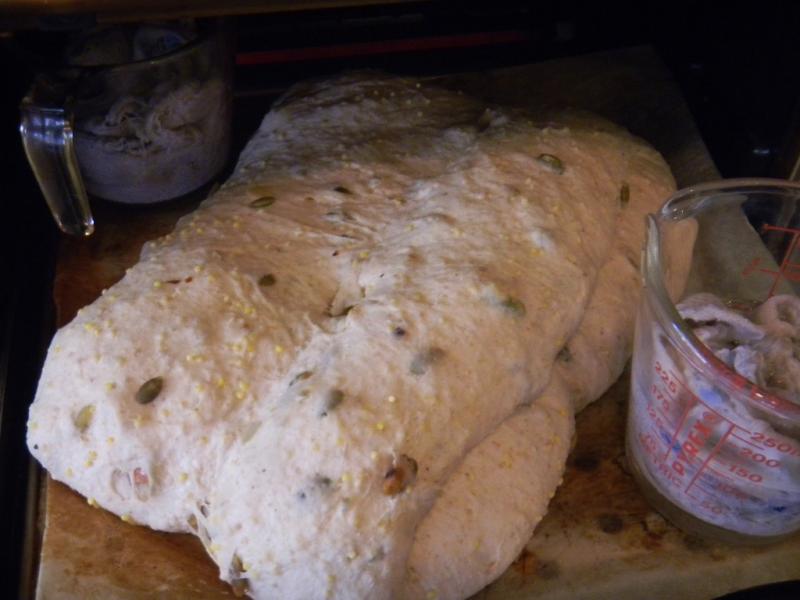 We incorporated the add ins on the first of 3 S&F’s which were done 15 minutes apart.  After 1 hour of ferment on the counter, the dough was bulk retarded for 14 hours.  In the morning it was allowed to warm up o the heating pad for 2 hours.  It was then shaped Altamura style but once again, it came out too long for the 12” mini oven so we folded each end under to shorten the shaped dough without having to redo it all. 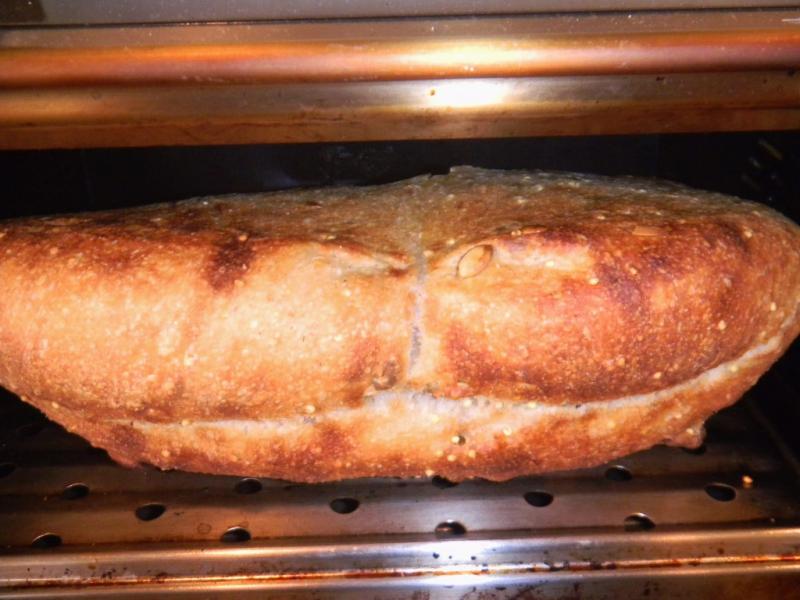 After a 2 hour final proof on the heating pad, we started up the mini oven for preheat with the bottom of the broiler pan 1/4 full of water.   The bread was baked at 450 F with (2) of Sylvia’s steaming cups on the top of the broiler pan with the dough.   After 12 minutes we removed all of the steam and turned the oven down to 425 F, convection this time. 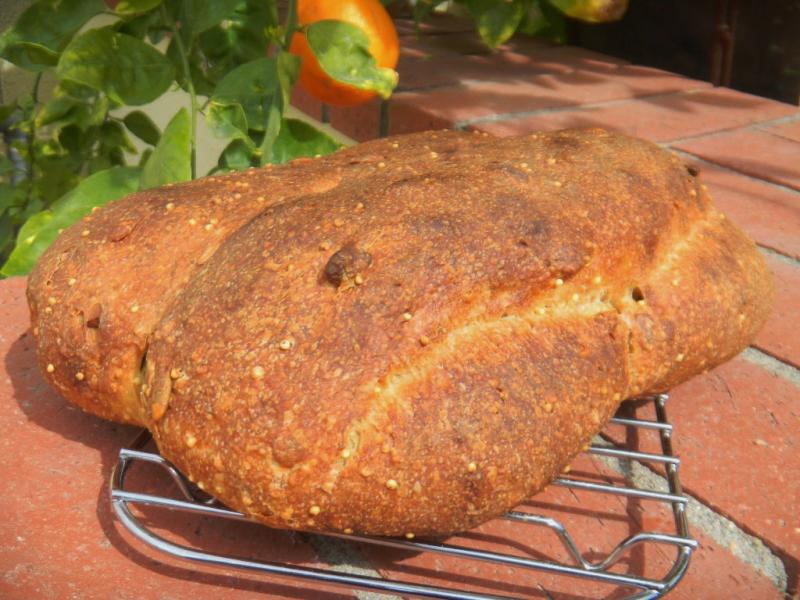 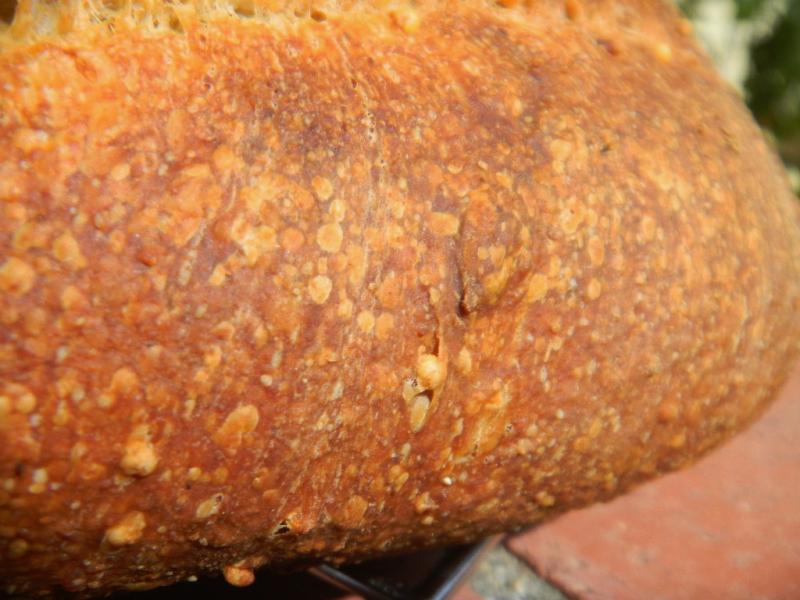 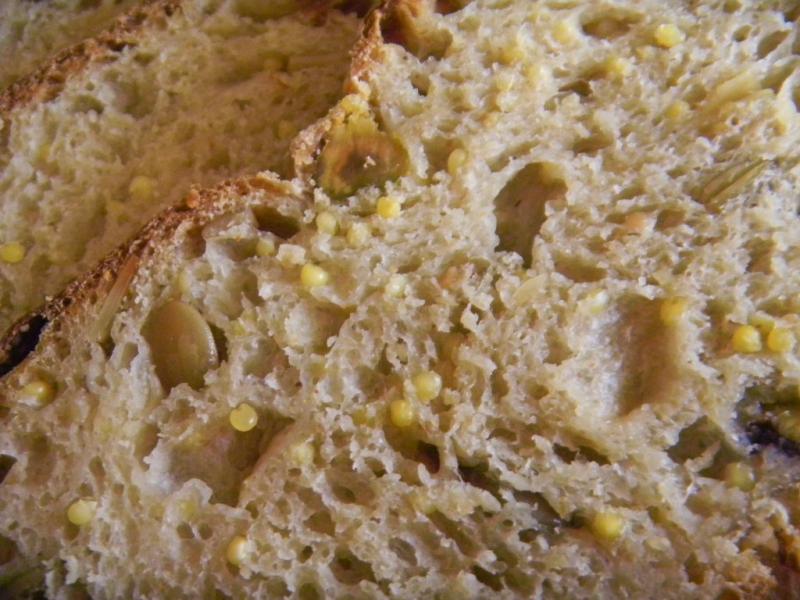 The bread crust came out that usual durum color.  It was nicely brown, blistered  and crispy that went soft as it cooled.  The crumb was fairly open but not as much as we expected with the nice rise during proof and the spring in the oven under steam.  Still, it was very soft, moist and airy with the green and brown splotches of the pistachio and pumpkin and the yellow millet bits that stayed crunchy. 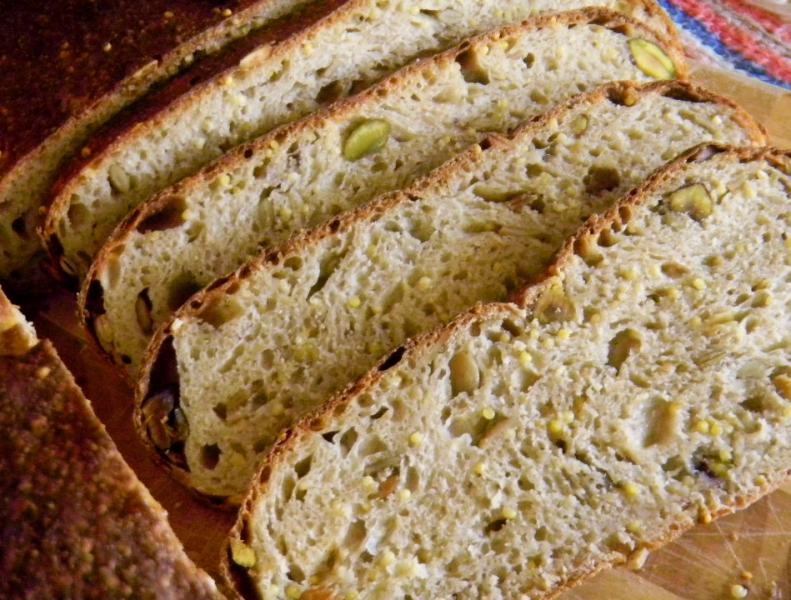 Can’t really makeout the ricotta cheese but the soft moistness of it was left behind.  This bread reminds me of bread with cream cheese in it.   We like the taste of this bread and it made a fine sandwich for a late lunch today.  We will be making a version of the bread again. 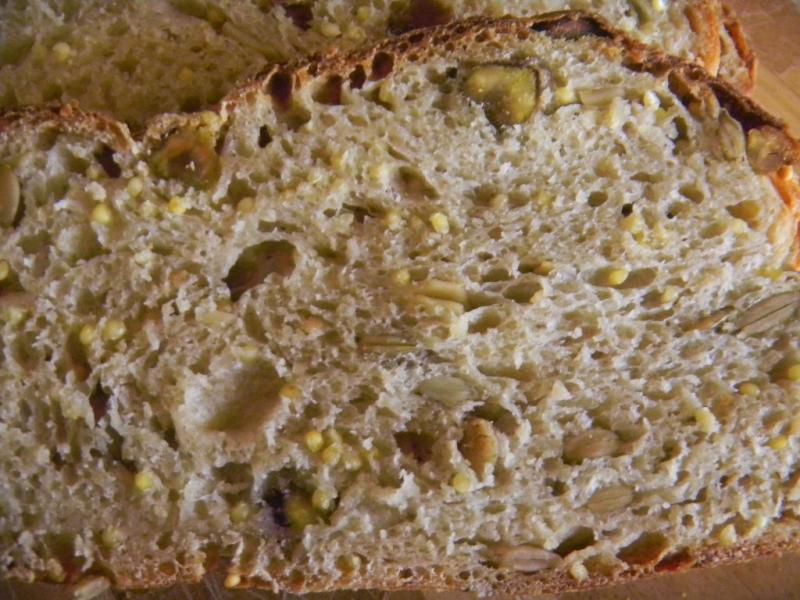 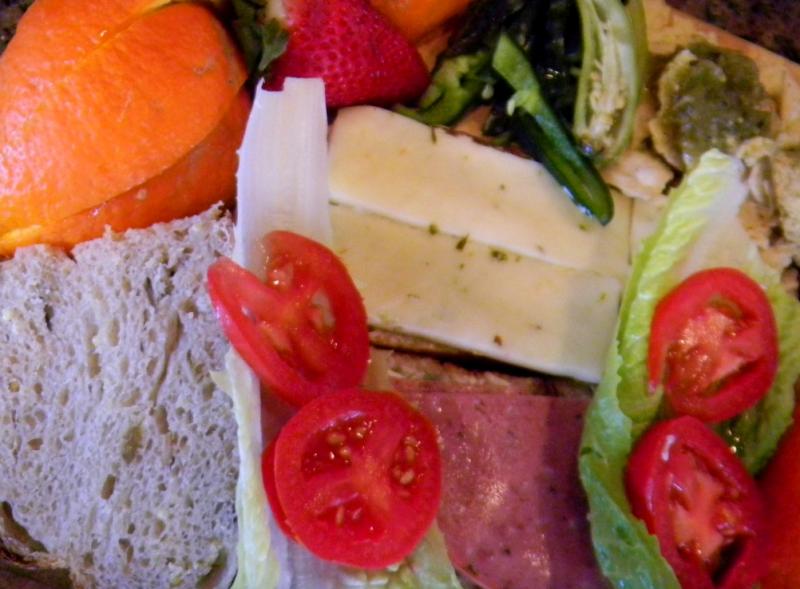 Looks like another winner DA.  Love that moist open crumb.  I can taste that cheese about now.

i bet you if you bumped up the cheese amount next time you will like it even more.

would be right about the cheese if Ricotta had any taste at all.   You could dump the whole tub in there and not taste it.  If you used Parmesan or sharp Provolone you would have to cut the amount :-)  I think some cream cheese would have given the dough the same effect.  Pecorino Romano  would probably give you the best flavor.  A whole Desert Durum scald and soaker would have been nice too.  Still, it it a nice tasting bread for sandwiches.

Thanks for the compliments as usul Ian and

I think I must have been half asleep when I wrote the comment.  I was thinking you used Feta cheese since I seem to have it on my brain lately!  You're right adding more Ricotta would not influence much.  Sorry about that...

I have a durum levain ready to make a bread today.  Have not decided if I will go crazy with this one or just mix in some organic bread flour I just bought or maybe add it with the Kamut flour and a little of something else.  I shall see.. may keep this one simple for a change :).

Thanks for the Wow!

I keep on returning to look at this bread. I am not even going to make an attempt at this one, with the fear of spoiling an ideal. But one of these days ricotta & pistachios are going to come together in my bread. Luckily, I have both stashed in my fridge :).

if it didn't have to be folded under at each end to fit the 12" mini oven width and length? Maybe it looks better folded under though?  You can't eat the looks of bread and the holes, contrary to popular belief,  have not taste at all!  It is an easy enough bread to make.  If you don't have YW, just forget it and up the SD a little - being sour wouldn't hurt this bread at all.  I say there is no time like the present...... so give it a go!

Glad you liked this bread, we do too!

Looks delicious. I really like the look of that dough and that Altamura shape.

the shape better  if.....you don't have to shorten it up to fit a mini oven :-) You should end up with a short baguette size and shape on one side of the seam and a batard on the other side as a 1/3 vs 2/3 rds split of the dough.  A 100% variety would be great and the Panettone Man would have no trouble developing the weaker gluten of durum after seeing your 100% spelt.  I did 100% whole Kamut bread bread last year and it was very nice and Kamut is  a durum variety.   I didn't get the gluten development and rise like you do though - mine belonged in a pan :-)

I tell you, this bread I definitely cannot resist... Looks pretty darn delicious! I'm rather fond of soft to semi-soft, mild tasting cheeses as well as pistachios. If they weren't so costly in my whereabouts, I'd experiment with them more often in my breads.

As always, have a happy baking,

Had it for lunch again today and it was such a nice bread to make a sandwich two days in a row.  I just found a steal at Costco for a pound and half of pistachios already hulled for a little over $14.   They are expensive no matter where you loive because you only  one crop every two years and are more scarce.  Where you are they have to be very pricey indeed.  They are a much under used nut in breads as a result.  I like them not only for taste but for color too.  I've got to get me some purple carrots to go with red beets, black figs and green pistachios.  Now that would be some kind of neon bread :-)

Can't wait to see your next sculpture in bread Zita!

i love your combination of riccotta in this bread. does it make the texture softer?

Nice one dab.  A loaf I'd surely eat way too much of, were it sitting on the kitchen counter when I came home from work.  Pistacios, pumpkin seeds.  Good stuff.

Mucha semolina in the air these days -- in every post it seems.  How many durum posts @ TFL would it take to convince a mill to mass-market fine durum flour?  More likely they'd see these posts and say, They're doing fine (well, coarse) with semolina -- don't need fine. Harrumph.

Great shape to that loaf.  What I want to know is, how the heck does one photograph every step in shaping like that without coating the camera with dough or washing hands every 15 seconds or.... does that apprentice of yours have some really special talents? (besides climbing up on top of the fridge to get the angle for those shots).  Those little legs got chops.

this bread doensn't have any Toadies in it (not yellow enough even though I though about throwing in some wheat germ that is yellow and Toadie component) you will still like this bread.  The crust has that Durum semolina color along with the crumb but the crumb is so soft and moist.  A real keeper if want to make a durum bread.  There are a lot of durum breads on TFL right now and all of them are pretty nice if you ask me.  This Desert Durum the primo of durums if you ask me and I'm thinking the Hayden Mills folks will be milling it at a very premium price of course.

This bread is a pretty high hydration but the Desert Durum is very dry at 6% moisture vs 12-14% for regular durum.  Plus after and hour autolyse and some lovely French slap and folds folds with 14 hours in the fridge retarding itself, it is a very nice dough to shape and not sticky at all.  It really rose and sprang well too.  Pictures were no muss no fuss at all.  The pumpernickel was a real sticky mess that required washing hands before every picture.  My apprentice is usually too snockered to take decent pictures unless you get her working on them early in the morning,

Glad you liked the bread Tom.  It is just about time for another batch of your namesake Toadies to hit the skillet too.  I really go through them pretty fast but want to keep them fresh with small batches anyway.

Can't wait to see you next bake!

Once again that apprentice has come up with an intriquing recipe and then made it work! Nice looking bread-
ricotta must have made it really moist too
Barbra

in some veggie dog bones, a Sylvia creation,  a a milk softened soaker but caught her at the last minute!  The ricotta made for a soft and moist crumb.  The bread might be better with a durum whole berry soaker instead of a dog bone one - not that the dog bone one wouldn't work too  :-)

So what are you GMA's making this Monday?