This crust was super for the Super Bowl.  Our best and most simple one to date – here is the recipe. 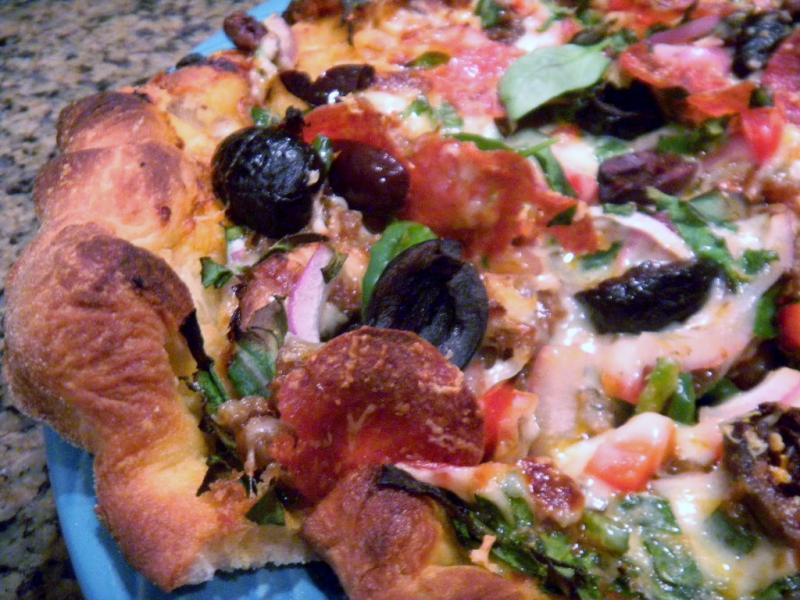 Mix yeast with sugar and water and let it sit for 5 minutes.  Then mix in the flour and let the biga sit on the counter overnight – 10 hours

Do 10 minutes of  French slap and folds and let sit in an oil covered bowl for 1 hour,  Do one set of S&F’s 4 quarter turns, and let it sit for another hour before refrigerating.  2 hours before you want to use it, take it out of the fridge and let it warm up.  We always par bake out crust for 3-4  minutes at 500 F on a stone before yaking them out to load them up with toppings. 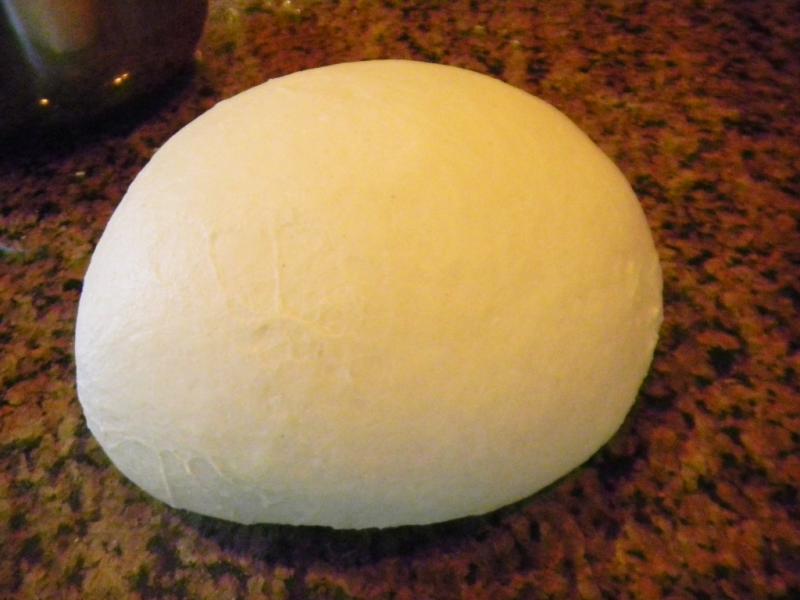 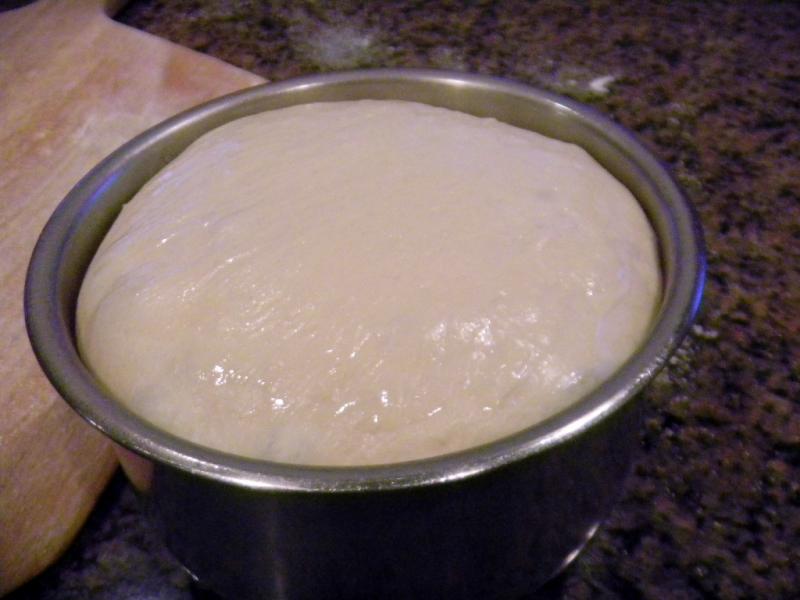 I told Ian that I would tell him where the word crust comes from one day and since this was such a good crust, now is the time. 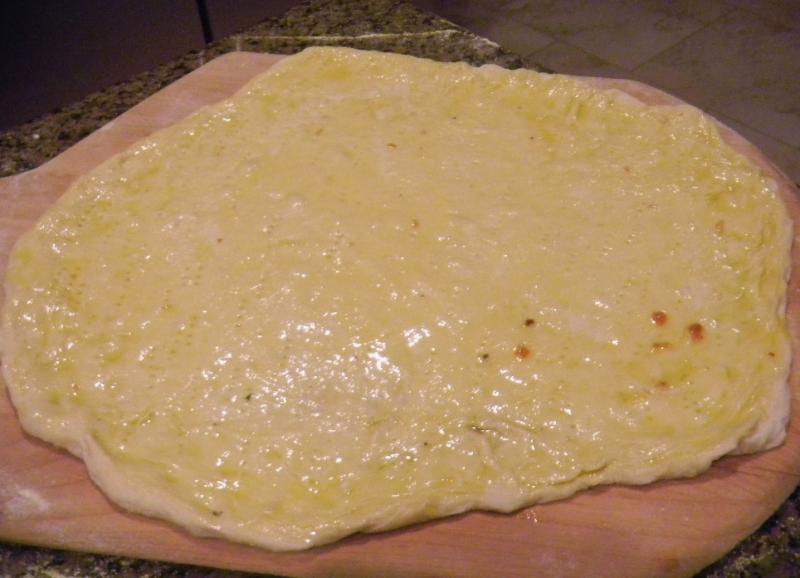 Paint with Mojo de Ajo and dock before par baking for 3-4 minutes.

There is way more truth to this than most want to admit.  An example is toast.  The Italians will tell you they invented garlic toast (and pizza too but that is another story), what we call bruschetta today , but this isn’t really accurate and historically correct. 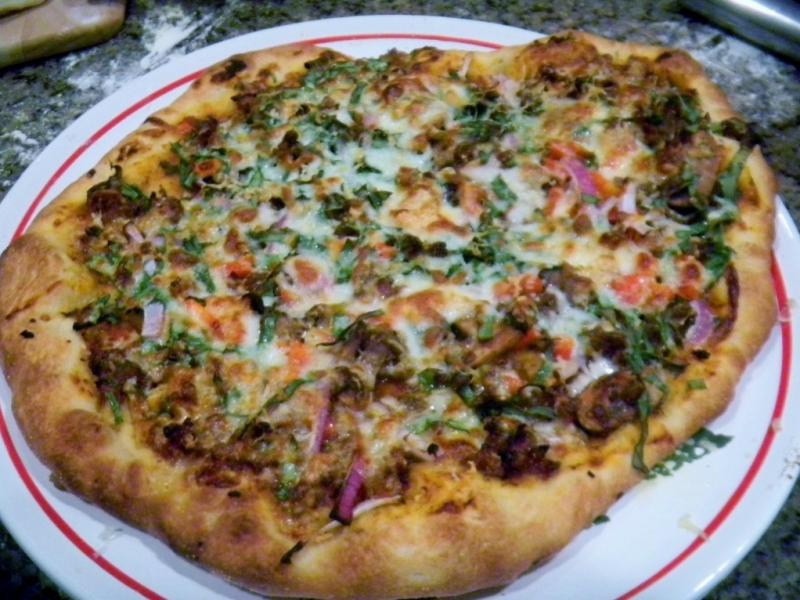 There was a really famous Greek baker, at least as famous bakers could be before television, named Paximos who baked bread long before there was a Roman Empire for Greece to be conquered by.  He invented toast by roasting sliced bread on an open fire – a fairly simple recipe even then.  Paximos found that his sourdough toasted bread not only sold well but kept for an unusually long time, even for sourdough.  This allowed the Greek people people to travel with a food that was light weight and just the perfect road nosh.  It allowed the Greeks to open up over land and sea new trade routes to far away places.  Toast changed the world. 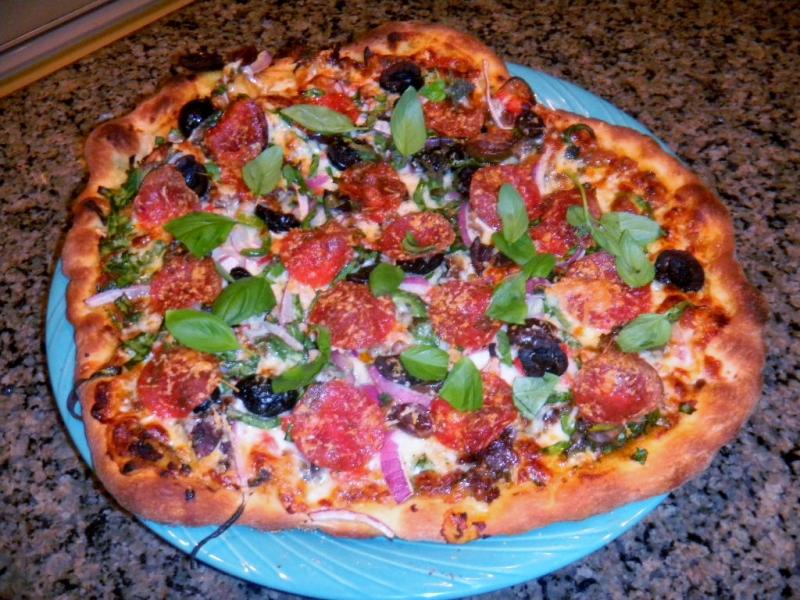 Paximos called his toast Paximadi, after himself.  To this day you can travel all over Greece where in nearly every bakery, or outside it, you will see a sign proudly advertising Paximadi - toast.  Some is sweet for breakfast and some has garlic on it for warding off conquering Roman hordes and vampires  no doubt. 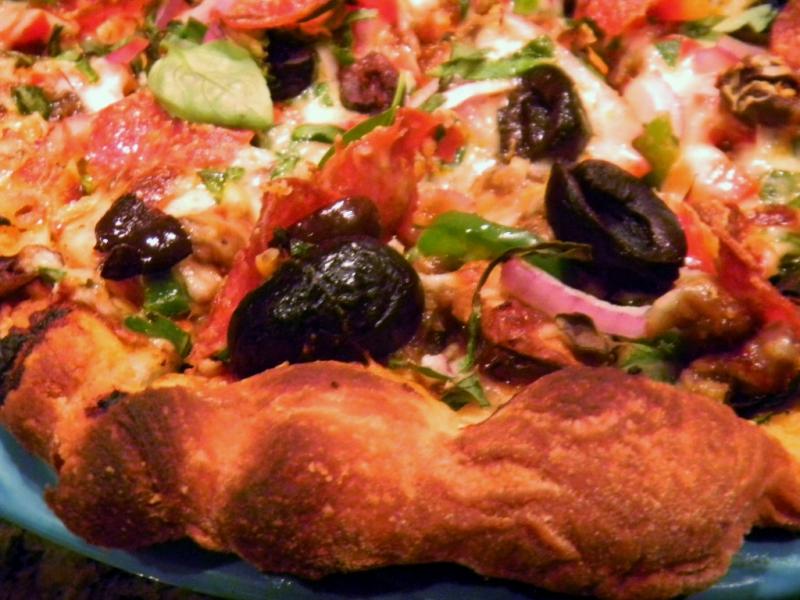 So, when the Romans finally invaded and conquered the Greeks, they discovered to their horror, that the Greeks had been making garlic toast – for centuries.   Something as good as Paximadi just couldn’t have a Greek name in the vast, all consuming Roman Empire.   So the Rimans changes the name of Paximadi; Greek garlic toast, to something way more Roman – Crustulum – the Roman word we take our word for crust from today.  But, we really should be calling crust Paxim if you ask me. 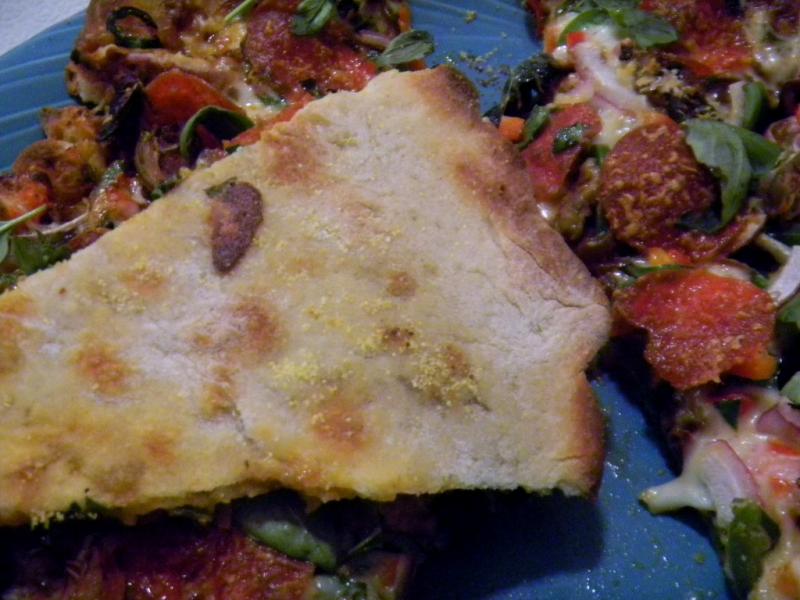 As a further note, when the Roman Empire fell, Italians stopped speaking Latin and picked up Italian as their daily vibe, they changed the name of Paximadi again - this time from Crustulum to Bruschetta.   Americans too use this modern word for Greek garlic toast today but Americans prefer an even more ancient Egyptian name for wheat and yeast based sustenance on Super Bowl Sunday - Brewskies! 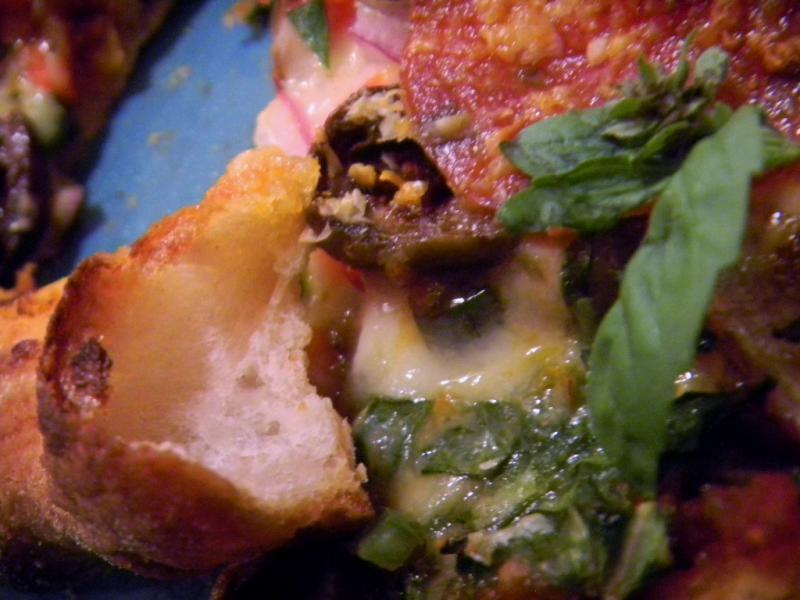 Looks really tasty- love the soft, wide open look of the crumb in the rim!  Enjoyed reading the amusing history, glad your pizza was Super.

was true?  My apprentice told me the story of crust and she said she read it in a cookbook many years ago but couldn't remember which one, and my German isn't really all that good.......    She also has been known to spin a yarn now and again.  This crust was crusty and stayed crusty until it cooled off. The holes on the rim  were very good this time too.  The pizza was really tasty once it got loaded up.

That was one interesting read. Thanks!

Congrats to the Baltimore Ravens.

I was rooting for the 9'ers but the Ravens played just well enough to win by having a great first half and running the 2nd half kickoff back for 6.   Then it went downhill for them but they hung on - a sign of a champion being really lucky:-)  We liked the pizza and brewskies even better!

Bake on ...in a laid back sort of way Lazybaker!

Great game... 5 more minutes might have made a big difference... but all in all, even though I would have loved to see the 9ers win... the Ravens played the better game.

Great looking pizza... I love homemade pizza, where we can indulge our personal tastebuds.

I've got a really wet and dark multi grain bread trying to fill up the loaf pan I dumped it into today for final proof.  If it doesn't get a move on I'm going to have to put it in the fridge.

I was rooting for the 49'ers too.  They really made a comeback but just came up a little short.

There are very few great things in a world full of things but pizza is one of them!  That is why it is one of the basic food groups  with beer and bourbon, bread, chocolate, ice cream; cookies, pies, cakes and assorted pastries, and BBQ'ed; meats, sausage, fish, veggies and anything else you can grill or smoke.  Pizza is by far the most versatile though.

Get your Valentine Rose on - hopefully next Monday!

Those are some awesome pizzas.  Now what is the origin of the word pizza?

We will have to keep it a secret for a little while longer though but, I'm guessing it wasn't Latin or Italian :-)  First I have to find out  where Tall Tale came from Linda :-)

The pizza was great!  It had 6 kinds of cheeses, 3 kinds of sausages, 4 kinds of peppers, 2 kinds of mushrooms, 4 kinds of olives, Swiss chard and my apprentice  forgot to put out the sun dried tomato and artichokes but she did whip up  homemade special sauce out of the freezer   :-)   You have to splurge on SB Sunday!

The crust was simple enough but fantastic.  Amazing what simple things can do in a pinch :-)

I'm not sure which I like more your history lesson according to Lucy or your pizza!  Either way both are worthy of the game yesterday and both more interesting than the commercials this year.

I think I may have to go eat some Italian for dinner now....

Can't wait to see your next brown bake.

were not up to SB standards. - sort of like my slashing :-)  The game was fantastic though and one of the 3 best.  We're having Italian tonight too as part of dinner - to use up the last of the pizza sauce my apprentice found in the freezer.    Well, I'm glad Lucy's explanation of the promised 'where crust came from'  lived up to its billing.

The pizza  was better than the story though.  I know Lucy and she can't be trusted with historical facts about Greeks and Romans.  She's German and is very determined though :-)

Have a  Dark Bread that wouldn't proof so I chucked it into the fridge to try to force it to wake and puff itself up.  That's not working either.  Its not the starters and levains since I used 4 of them at their peak for this bake :-)  Total and complete non cooperation if you ask me !

You didn't mention the starter you used. I have an AP?WW, 100% starter and I'm hungry!  Will that work?

I really liked your 'history lesson' ( I have two degrees in History)!  I hope you don't mind, but I copied it and sent "The History Of Toast" to all my kids---That's our kind of Super Bowl !

bake but my favorite dough is SD with a smaller biga,  This was 220g of biga so if using both SD and biga I would make each 110 g building the 100  hydration SD from 10 g of stiff starter plus 50 g each of flour and water over 1 6-12 hour build   depending on how strong your SD starter is.  Then just use a 1/16 tsp of ADY with 55 g each of flour and water.   Good pizza dough needs a long retard overnight too.

I still haven;t gotten around to telling Ian the story about pizza too - that is also nearly as truthful as the crust story.  I should have included it in my apprentice's pizza post on Friday but forgot :-)