Along with a few simple tricks.

I've learned how to make pretty good bread from this forum. This is the first of a set of posts describing a few of the things I've learned. Maybe they will help somebody new.

Here in New Hampshire temperature can be a problem. Like this week when the overnight low was -6F and the temperature in our kitchen was 55F. Yeast growth is really dependent on temperature and there is a happy zone in the 70-80F range. A proofing box gives me the control over temperature. There are several threads on proofing boxes on TFL. and there are commercial products. I made one, mostly with stuff I had around the house.  It was one of the things that made a big difference in my ability to make consistent bread. Here it is in pictures.

I started with a cooler we had in the basement: 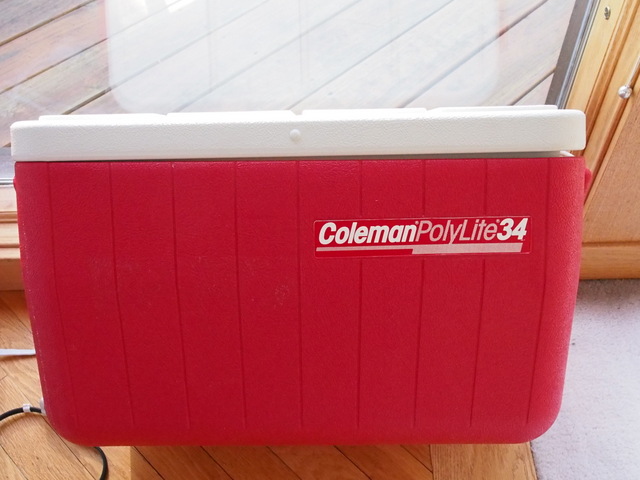 Any size will do, as long as it is 'big enough'. Then I added a 15W light bulb and socket, and a thermostat. Nothing fancy, just shoved it all in there. The extension cord coming out of the box is flat, rather than round, so it is not too badly squished. The light bulb could probably be smaller wattage. You do want it some distance away from the thermostat. 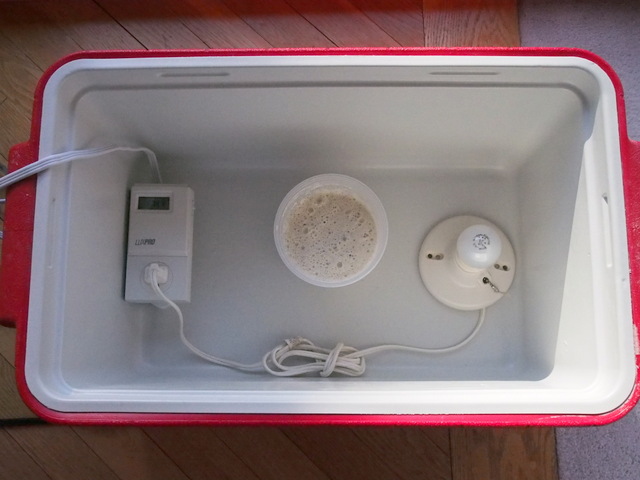 That's Earlene, my starter Fred's love child, bubbling in the middle after a warm and pleasant overnight stay. The thermostat is a Lux Pro PSP300. I got mine from Amazon:http://www.amazon.com/LuxPro-PSP300-Programmable-Digital-Thermostat/dp/B0032JUG46/ref=sr_1_2?ie=UTF8&qid=1359256101&sr=8-2&keywords=lux+pro+psp300.It's a little expensive, but it works well. I think their WIN100 model, which is a little cheaper, would work too.

I can also fit a proofing bucket for bulk fermentation in there: 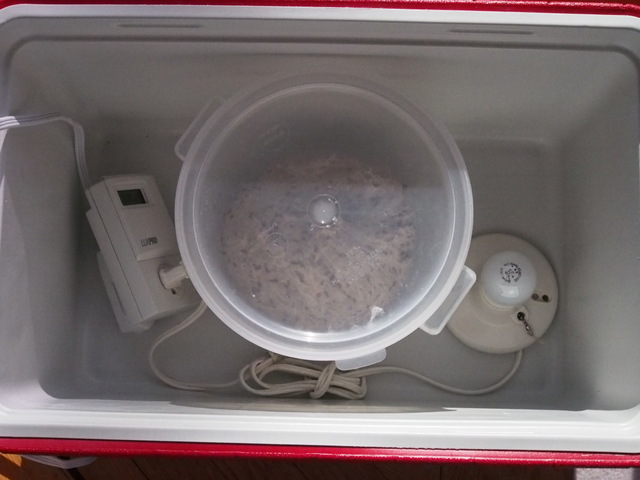 Cambro buckets work very well for bulk fermentation. Make sure you get yours from a local restaurant supply rather than a 'bread enthusiast' web site: mine cost $6. 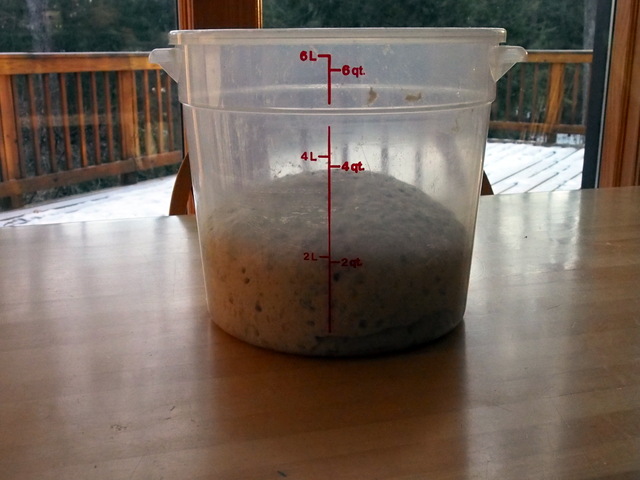 That's Hamelman's Five-Grain Levain, more or less, in there.

I usually retard my sourdoughs, for better flavor and scheduling. But sometimes I do the final proofing in the box. For that I built a little stand that lets me stack bread pans or bannetons. 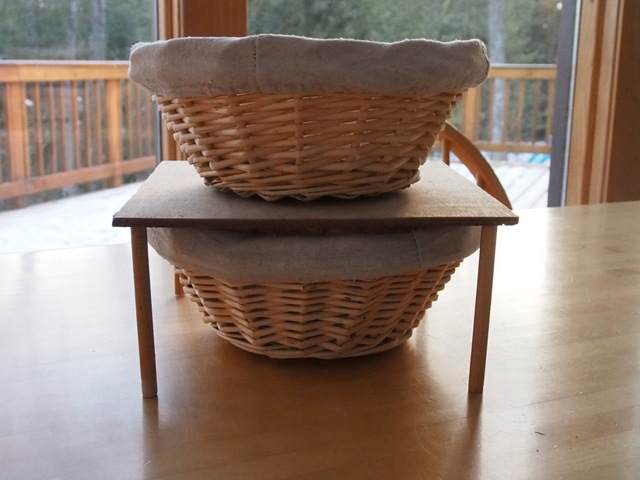 The box is tight enough and the loaves are wet enough to create a nice humid atmosphere inside without the need to introduce additional humidity.

The thermostat works for both heating and cooling. Sometimes I use it to control a little portable electric cooler (which doesn't have a thermostat) when the fridge is full and I need to retard some dough.

Bread runs on its own schedule. A proofing box help it conform, to some extent, with yours.

Nice job on the DIY.

I'd been eyeing one of those thermostats for a while.

Great proofing box. I made one last year when our temps. got too low and my halogen lamp couldn't keep up.  Made a big difference and I love it.

Great job and thanks for sharing.

One question; how long does it take to get up to 70 - 80 degrees in your proofing box?

I'm curious as I have 2 coolers I could use but I think they are both bigger than yours.

Also, what kind of make and model cooling fan did you buy?

I've never measured how long it takes to warm up. Of course it depends on how cold it was to start. I would guess maybe 30-40 minutes to come from the 55-60 it is in the basement right now to 78 or so. Once it gets up to temperature it stays there. If I'm using it for bulk ferment or final prooving loaves (and I have enough presence of mind) I might turn it on an hour before I need it. When bulding a levain for 12-14 hours overnight I often put the newly-mixed levain in the cold proofing box, turn it on, and go to bed. The electic consumption (15 W with a low duty cycle) is minimal.

By 'cooling fan' I assume you are referring to my comment about using the thermostat to control an electric cooler.  I had an earlier version of a cooler like this one: http://www.amazon.com/Igloo-Thermoelectric-Cooler-Mercury-40-Quart/dp/B001JT5QAK/ref=sr_1_2?ie=UTF8&qid=1359294365&sr=8-2&keywords=igloo+electric+cooler (I don't recall paying nearly that much, but it was a long time ago.) These 'electronic' coolers use a semiconductor material rather than a compressor to cool; they will cool to a fixed offset from the outside temperature - typically 40 degrees or so. That means they can get too cold for retarding dough, so I use the thermostat in cool mode to cycle the cooler in the same was as I cycle the light bulb in the proofing box.

Thanks for the info Bob.  I might just have to put one of these together.  I usually bulk ferment my doughs but once in a while like now I'm doing some English muffins so I'm letting it sit at room temperature.  It's about 65 degrees in my kitchen so I moved it to a bedroom where it's warmer.

Thanks for sharing in detail. Very helpful for those who want to build proofing box.

I think that's the simplest design I've seen and with parts reusable for other things.   That one is even simple enough that I could put it together.   -Varda

To proof dough I use large plastic bowl covered with very tight plastic bag.  It works for me every single time. I let air out when covering bowl and after 30ish minutes it is like balloon.