We had some yeast water and SD Desem starter left over from our 'Bun Experiment' yesterday where we compared YW with SD in buns.  We were going to use them up with a combo starter to make the same buns but we have too many buns after yesterday. 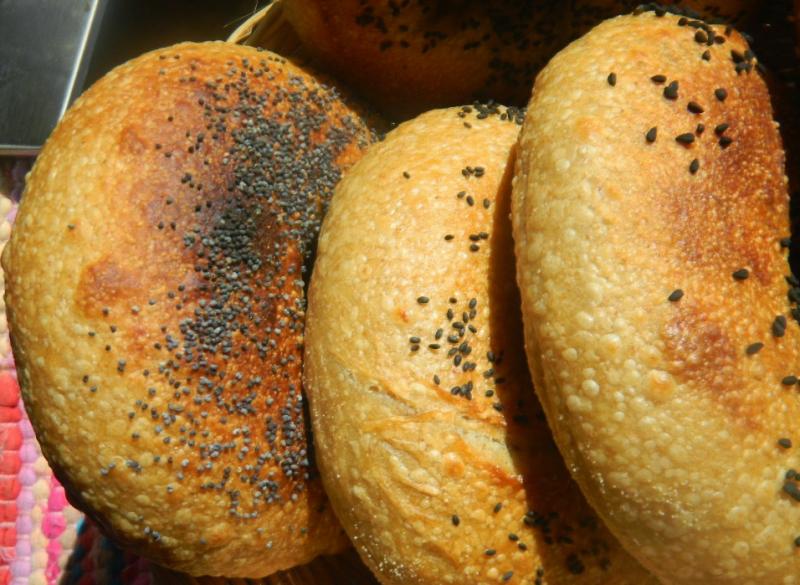 From left: poppy and not your usual; nigella and basil seeds.

What we did not have was bagels so we used them up on some 15% WW bagels.  Our last bagel bake was a much higher percent whole grain SD bagel with sprouts.  They were delicious.  This bagel recipe was still based on Stan Ginsberg’s recipe he published on TFL and is more traditional in grains with the whole wheat being in the combo yeast water and SD Desem starters only. 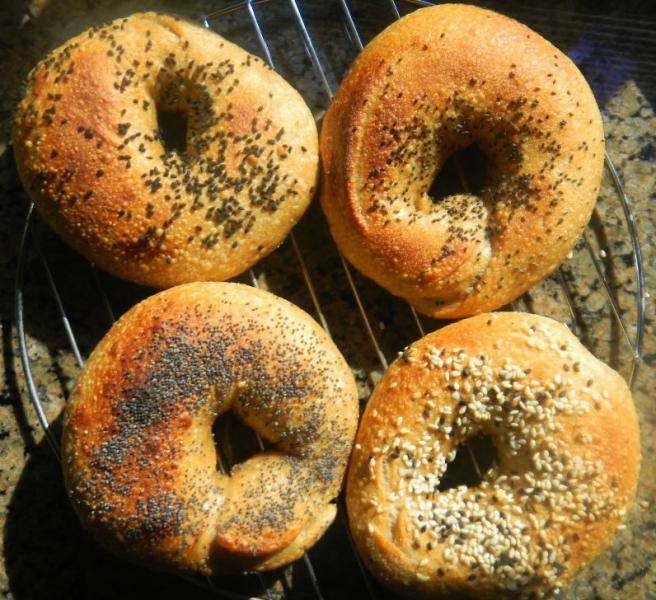 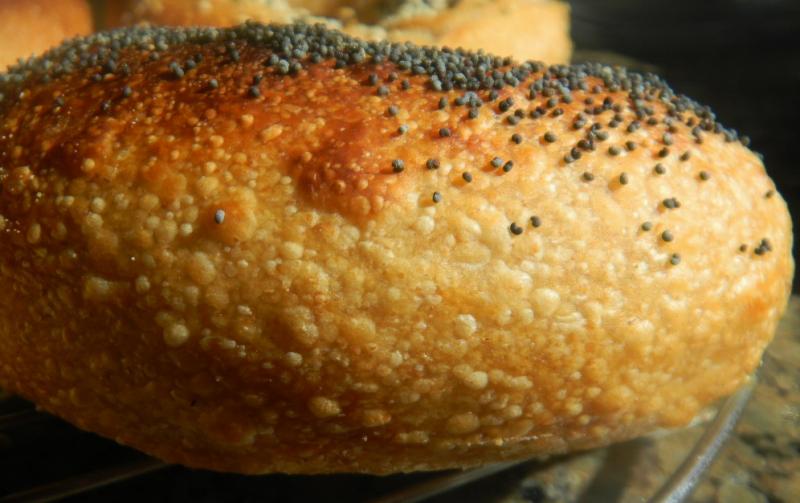 These bagels are by far and away the best ones we have ever produced.  If you want NY Jewish Bakery Bagels - these are the ones you want to bake - thanks Stan.  The crust was nicely browned and blistered.  They came out of the oven crisp and went to chewy as it cooled.  The crumb was open and moist yet had just the right bite a bagel should have.  The taste was very good with a slight SD tang.  They were delicious, just cooled, un-toasted with cream cheese.  No toasting necessary at all. 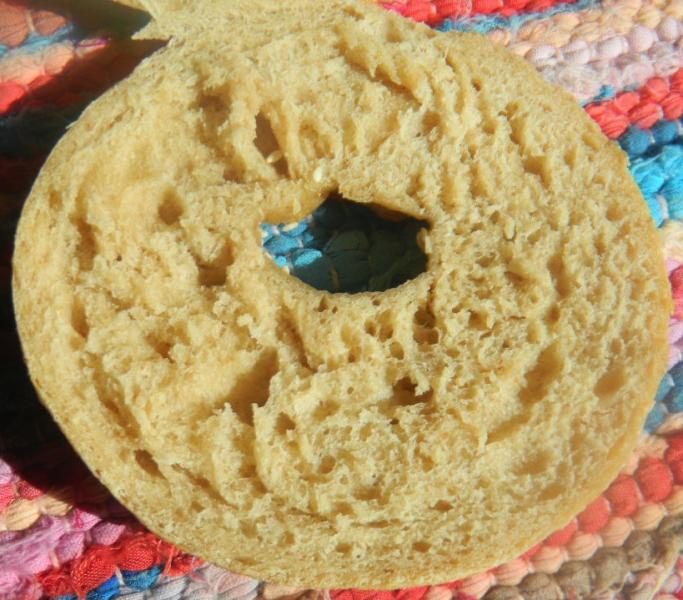 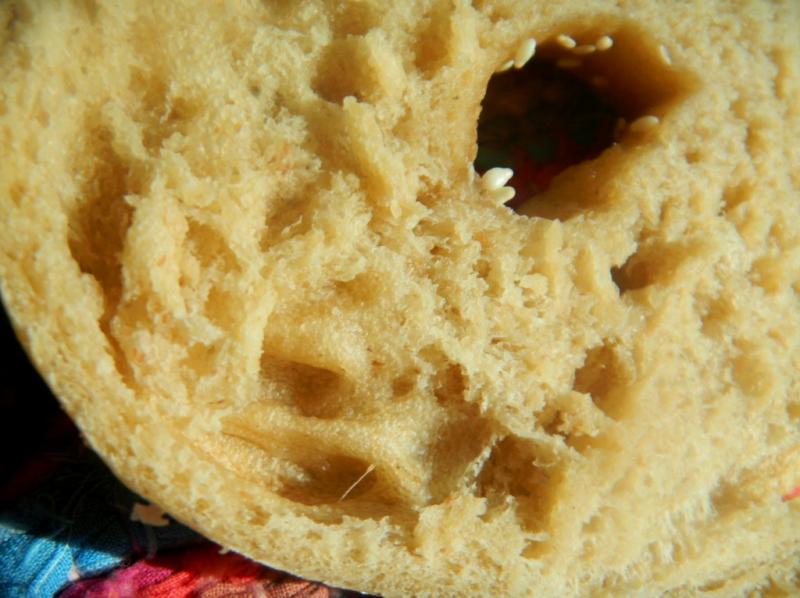 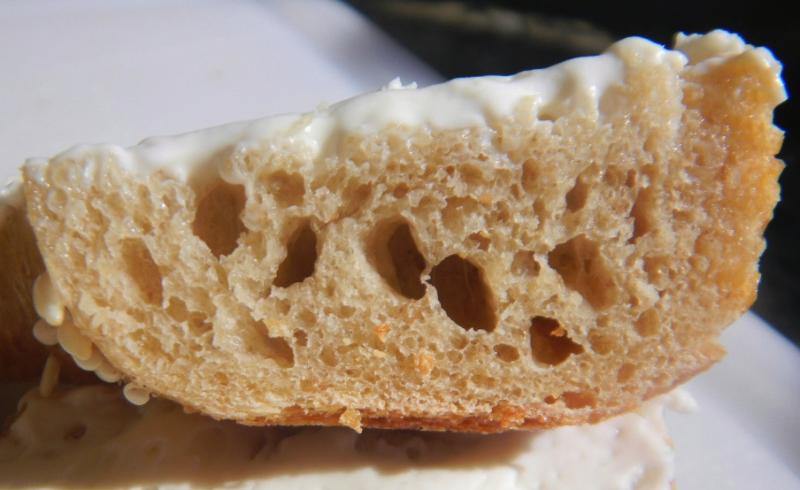 We built the YW and SD Desem starters separately over (2) 3 hour and (1) 2 hour  build and then refrigerated them both for 48 hours.  Home ground whole wheat berries were used for both starters and accounted for all the WW in the final dough.

The water was mixed with the 2 starters to liquefy them.  The rest of the ingredients were added and mixed by hand to incorporate.  The dough was kneaded for 10 minutes by hand and then allowed to rest, ferment and develop for 2 hours covered with plastic wrap on the counter.  The dough doubled over that time.

The dough was them divided into (10) 128 g, folded into balls and then into 12” tapered, from middle to end, ropes.  The ropes were rested for 10 minutes and then formed into bagels by the ‘over the knuckles’ method where the ends were rolled on the counter to seal them together.

The bagels were placed onto a parchment covered and semolina sprinkled cookie sheet, covered in plastic wrap and refrigerated for 20 hours.

After removing the bagels from the fridge, they were immediately simmered for 30 seconds a side in 1 gallon of water with 1 T of barley malt syrup and 1 tsp of baking soda.  The wet bagel bottoms were placed on a kitchen towel for 5 seconds after coming out of the water and then placed on parchment paper sprinkled with semolina which was on the top cover of the mini ovens broiler.

The mini oven was preheated to 500 F with the rack on the bottom.  A 1 cup Pyrex measuring cup with a rolled up dish rag, half full of water, was micro waved until the water boiled.  Sylvia’s steaming method was then placed in the middle of the parchment paper between (4) bagels at the corners.

The bagels were steamed for 8 minutes with the heat being turned down to 450  after 2 minutes at 500 F.  At the 8 minute mark the steam was removed, the bagels turned upside down, the rack rotated 180 degrees and placed in the upper position.  The Mini Oven was turned down to 425 F convection at this time.   After 4 minutes the bagels were turned right side up again, the rack was rotated 180 degrees and placed back in the lower position for an additional 4 minutes

At 16 minutes total baking time the bagels were deemed done.  They were nicely browned top and bottom and sounded like a drum when tapped on the bottom.  They were moved to wire cooling racks until cooled. 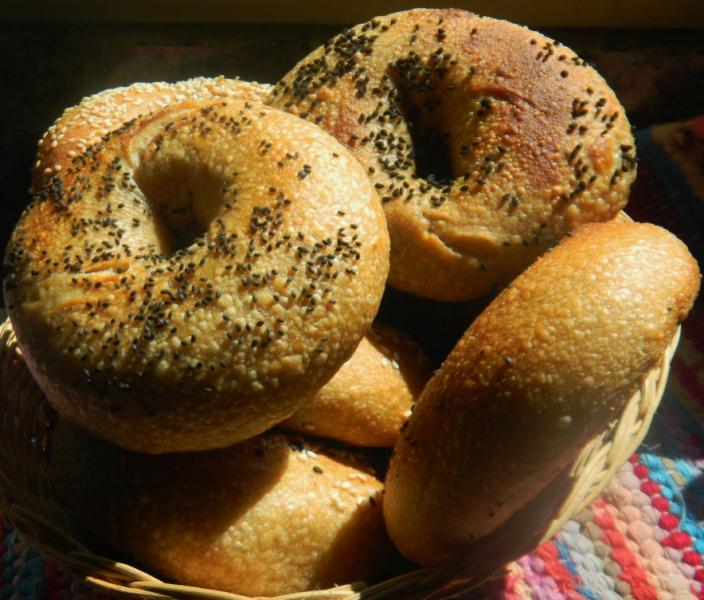 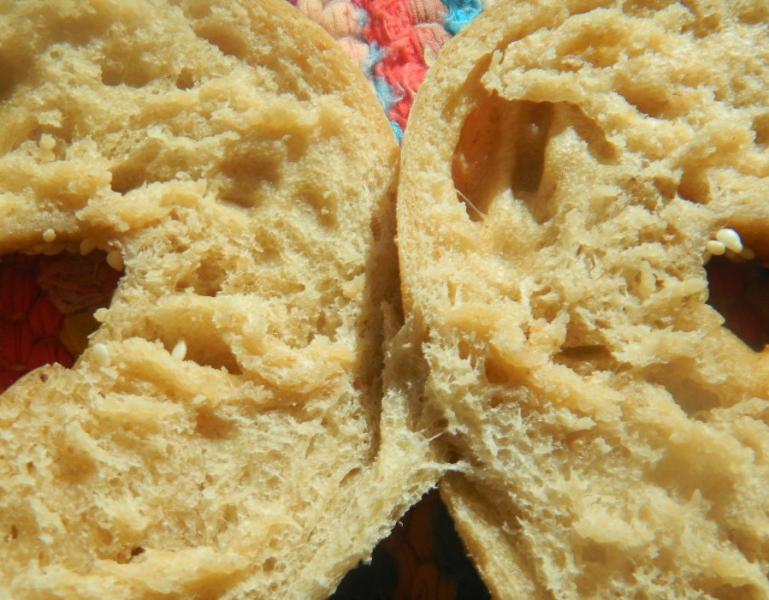 Definitely going to have to try these. Love the blistering on the crust!

The tiny mini oven (less than 1 CF) and Sykvia's steaming method developed for it are condusive to blistered crusts.  The only other way I can get it is with a DO - at home anyway.  I like a little more hydration than some bagel recipes too and this helps.    These are fine tasting bagels.  You are such a good baker you will really show what the should look like :-)

Give them a try.  I donl't think that they can disappoint for authentic NY bagels.  If they do - we will have to blame Stan :-)

Stan doesn't let his dough develop for 2 hours on the counter before shaping and retarding and I like his way too.

I used the ITJB bagel recipe a few weeks ago and found the dough to be a bit too dry for me, but it might have been the flour I was using.  These are what I had wanted to get, so you have given me incentive to try again!  I hope you had lox and a schmear to go with.

for sure.  Nothing like a fresh NY bagel.  This recipe is not as dry as some but it is still a stiff workout to knead by hand.  With the dough at 53% hydration and the levain at 80% this bake came out to 58% total hydration.   I didn't use any special flour just the Kroger supermarket brand.  The WW for the starter and the levain were ground from berries in an old coffee grinder.

Thanks for the nice comments.  Give it another go, these are very tasty bagels.

Love the crust....those look as good as any "Long Island" bagels I've had in a while.

I have bagels on the top of my list...even bought the barley malt syrup so will give these a go soon.

Have to re-make a Desem starter first....I let mine go as I started to run out of room in my refrigerator!

by the powers at bay around here who think they own the refrigerator, to one shelf on the bottom for my pickles, jams, starters and other unmentionable scientific oddities so I know how a limited space can make one do strange, if wonderful, things like tossing out the Demem to keep the YW:-)  I have a new architectural method for storing starters that uses much less precious fridge space.  It's called multistory madness.

Since we store our starters on the dry side with lots of flour for food while they are resting,  We can put more than one starter in a used, tall,whipped frosting,  plastic container.  I got comfortable keeping them at 80 g each and just stack them up in the same container separated by plastic wrap.  Can easily get 4 in the space of one now - but we only have 2 starters so they both live in multiple level, refrigerated GE Profile housing :-) It's like living in the projects in Scottsdale.

You will like this bagel recipe  and can add some more hole grains to the dough no problem if you want to make them more healthy.

Hope China goes well for you and they let you out of the country if we beat them in Olympic medals :-)

Glad you liked the bagels.  They are pretty tame but flexible for your messing with them :-)

It seems that the two starter method paid off.   You are getting to be a bagel expert.  -Varda

and away better than the last batch of multi-grain ones with sprouts.  Letting the dough ferment for 2 hours on thr counter and them shaping them before retarding them made all the difference in the world.  When my wife, an Einstein's lover wants these instead we know we have have saved her from a horrible death :-)

I used to make SD bagels al the time  but stopped for some reason.  This batch turned out especially nice due to the mini oven and Sylvia's steam.  Every once in a while everything clicks.  I think to be a real bagel pro you have to be generous enough to teach others how to make them well like you do!

I still haven't managed the courage to try your chocolate rye masterpiece.

Thanks for your nice comments Varda.

I love the crust in these bagels. And I'm sure they taste great too!

do taste nice and the blistered crust is due to Sylvia's steaming method use in the mini oven.  This was another bake using SD and YW that is quickly becoming my favorite way to bake just about anything.  Thanks for your comments.

Keep on YW and SD baking