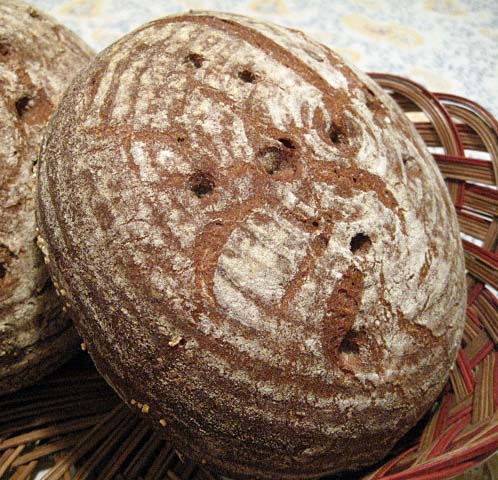 One of my thoughts in purchasing a Brød & Taylor Folding Proofer was that I would be able to make Three-Stage Detmolder rye breads with more precise temperature control than I could otherwise achieve. After using this device for fermenting other starters, fermenting doughs and proofing loaves over the past couple of months, I my first rye by the three-stage Detmolder method employing the Folding Proofer this weekend.

My one previous bake of a Detmolder 3-stage rye was almost 3 years ago. (See: http://www.thefreshloaf.com/node/12742/hamelman039s-70-3stage-rye-sourdough) I do recall that bread as having a delicious, sweet, earthy, complex flavor. The bread I baked this weekend was the very similar 80% Three-Stage Rye from Bread. This bread has an hydration of 78%. 37.8% of the flour is pre-fermented.

As described by Jeffrey Hamelman in Bread (pg. 200), this method, developed in Germany, “develops the latent potential of a mature rye culture through a series of builds,” each of which optimizes the development of yeast growth, lactic acid and acetic acid production, respectively. The builds differ in hydration, fermentation temperature and length of fermentation.

Hamelman calls the three stages or builds “Freshening,” “Basic Sour” and “Full Sour.” The first build encourages yeast multiplication in a moist paste fermented at a moderate temperature. The second build is much firmer and is fermented for a long time at a relatively cool temperature to generate acetic acid. The third build is, again, moister, and it is fermented at a warm temperature for a short time. This build is to increase the lactic acid content of the sour. After that, the final dough is mixed. 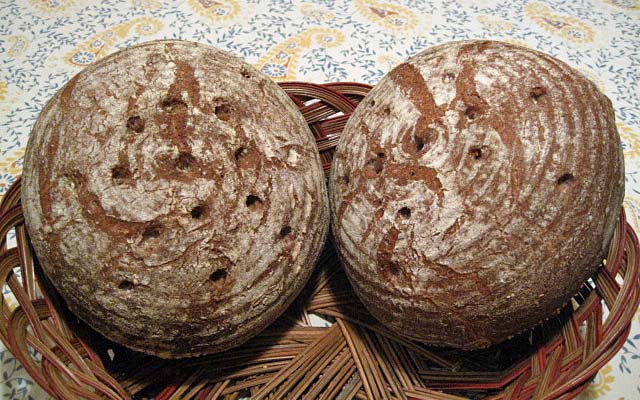 These loaves scaled to 807 g. After baking and cooling, each weighed 700 g. 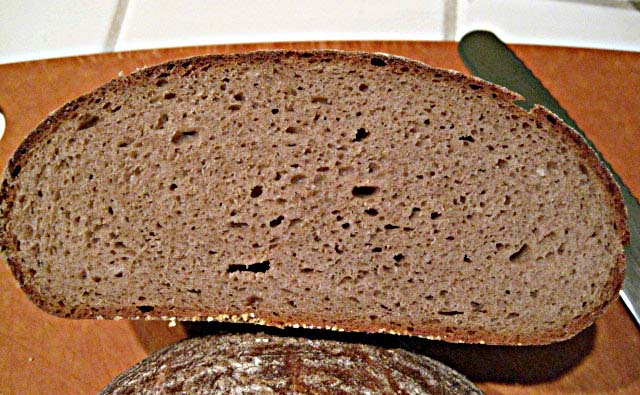 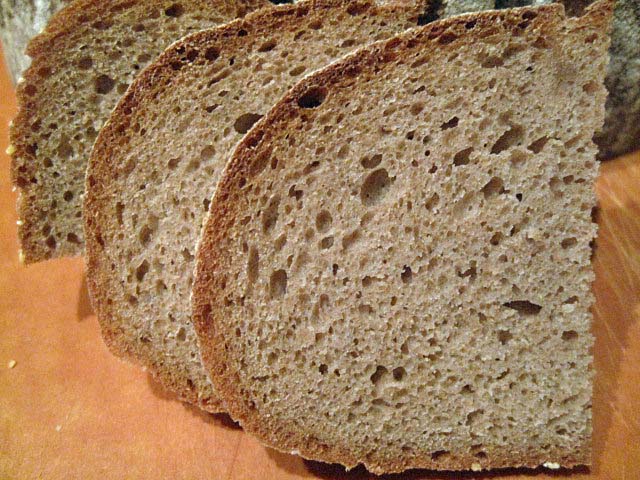 I sliced the bread after it had sat, wrapped in linen, for 24 hours. The crust was chewy, and the crumb was moist and tender. The flavor was very mellow and balanced. It was not as sweet as I remember the 3-stage 70% rye being, but that was 3 years ago(!). The sourdough tang was present but subdued. A lovely flavor.

I had been planning on leaving the loaves unsliced for another 12 hours, but my wife decided she wanted rye with smoked salmon as an appetizer for dinner. How could I refuse such a tempting proposition?

I also made a couple loaves of Hamelman's Pain au Levain today. As simple and straight-forward as it is, this is one of my favorite breads. 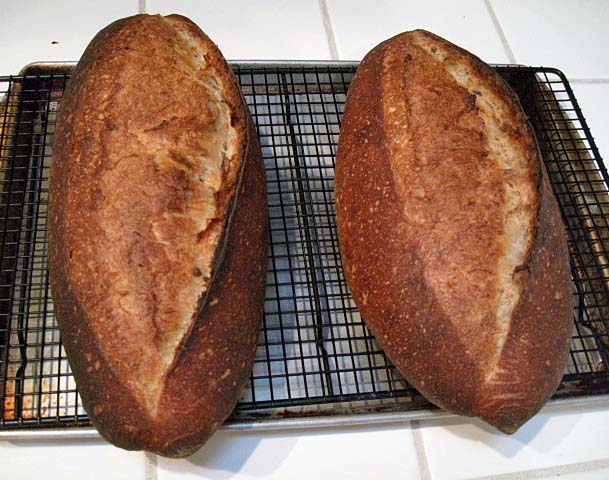 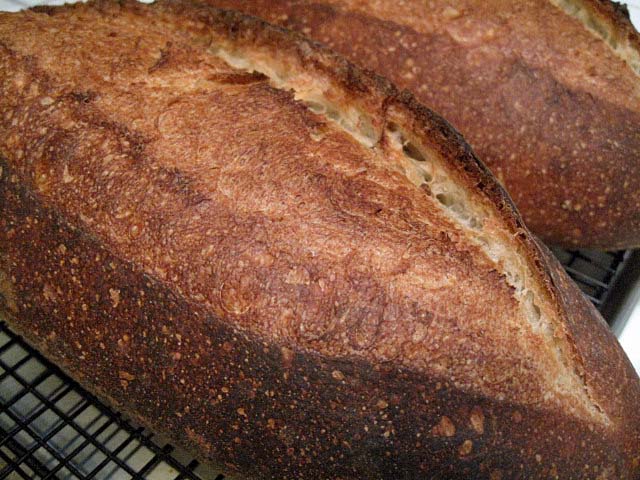 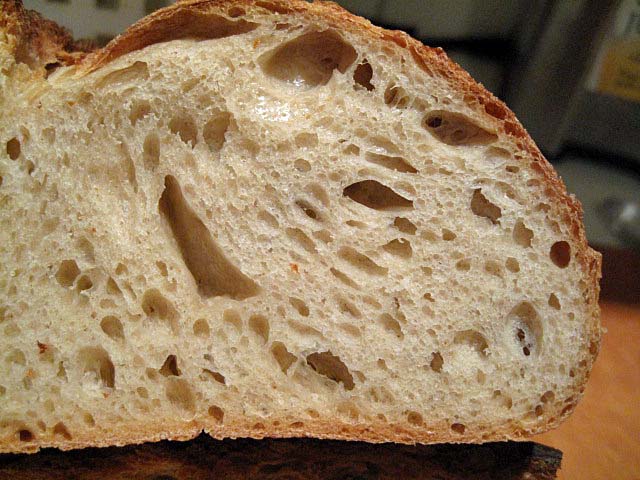 Lovely loaves all 4 of them!

Can't wait for the crumb shot and Susan's reaction.  :)

I'm looking forward to the taste test and the spouse test myself!

Those ryes look superb David.  Like Mini, I can't wait to see the crumb shot. They are perfectly formed with lovely cracking on the top.  Even the dock marks look attractive. Nice pain au levains, too.

I proofed these loaves seam-side down, thinking I might just let them burst willy nilly, but, when I flipped them onto the peel, the seams looked too well-sealed, so I did dock them. As anticipated, I got very good oven spring for an 80% rye, but the seams didn't really open much. The result does look nice to me.

Great looking loaves, each and every one, but your 80% Rye are simply brilliant! If they don't yield a spectacular crumb with the high profile you've achieved, I'll be very surprised. "I got very good oven spring for an 80% rye" indeed!

You made my day with these two David, thanks for posting them.

It's a classic win win then! A question or two: what was the weight of the baked loaves, and was it CM rye flour used in the mix?

(Man, you made me un-wrap them! The aroma!! They are never going to make it to tomorrow morning unsliced now!)

No CM flour in these. I used GM Medium Rye and KAF Sir Lancelot. I haven't used any of the CM rye flours as yet, just CM rye chops.

In the medium low range at 13 % then. There should be enough moisture left that the loaves will really need some time before slicing for optimum crumb set. Be strong my friend. Sincere apologies for putting you in that dicey position, not my intent at all. I just figured you had the #'s in your notes somewhere. Tell me to wait next time David, the guilt I'm feeling right now is almost too much to bear. ;^)

Well, my wife decided we are going to have smoked salmon on fresh rye as a dinner appetizer. So it was meant to be.

The rye loaves look so accomplished, and I'm eagerly awaiting the taste notes and your spouse's ultimate judgement.

Compared to a simpler 1-sted build, did you notice any difference in dough handling or volume expansion during bulk fermentation or final proof when you used the full 3-stage sourdough?

I usually build my rye sour through 3 builds, but not with the specific hydration levels or fermentation temperatures called for by the Detmolder method.

This dough was very slack and sticky. I handle most rye breads with lightly floured hands. This dough was shaped with wet hands. The formed loaves did have enough surface tension to not spread on the board.

There was no appreciable dough expansion during the very brief bulk fermentation (20 minutes), but I actually proofed the loaves for about 80 minutes, waiting for the pain au levain bake to finish and the oven to get back up to temperature. The loaves were well risen, and there was no deflation as I transferred them to the peel and docked them.

Regarding the spousal assessment: As she helped herself to a third slice, she told me it was very good, but not as good as the Jewish Sour Rye. She's a hard customer, but her taste for rye bread is coming along.

Thanks for the info, David!

The look of that crumb is remarkable. That's got to be perfect crumb and loaf profile for this bread; I would not be surprised if Hamelman himself would agree to that.

Thanks for the inspiration, David!

Excellent crumb, well aerated crust, this is a knockout rye bread in all respects. Nice one David!

Are you thinking of going "pro" David?  There may be an opening on American Baking Idol. ;-)

I have great admiration for the best (if you will pardon the expression) artisan bakers, but they work way harder than I want to. I am entirely content as a "serious home baker."

David, a super crumb!  Truly a beauty!  ...and the covered ones are a classic!  A dry white with a dip of cream...

(It finally dawned on me that "OP" is original post!  I must 'ave gotten a few more "B" vitamines just looking at the pictures!)   :)

And it finally dawned on me that

I had several of the first photos missing but when I switched to Chome I was able to see your delicious looking breads and the lovely crumb shots..thank you for sharing the formula.

Glad to hear you are enjoying your proofer...I get a lot of enjoyment from mine too!

The proofer makes the 3-stage rye bread so much easier!

That rye bread is pretty cool David ... you gotta be happy with that crumb :)

I am indeed happy with the rye.

smoked salmonndgreat rye bread what a crumb.  Someone is living and baking right!  Enjoy!

Masterful bake, David, you've really done a superb job!  Must try that Detmolder soon myself, you've inspired me to tackle it :)

If you do make a Detmolder rye, let us know how you like it.

on the cover of his next book !

Is Hamelman writing a new book?

I am open to reasonable offers regarding a cover photo. ;-)

I would think it would be very difficult to make this bread without the convenience of your proofer.

You may be convincing me to invest in one sooner than later!  I just don't know if I have enough room in my house for yet another kitchen gadget!

I have been able to come close to compliance with Detmolder fermentation temperature requirements by using my microwave oven with a mug of hot water as a proof box. But, clearly, the Folding Proofer is much easier.

The Folding Proofer folds up to a rather compact form. It does take space when in use, but it could be put anywhere close enough to an electrical outlet. Setting it up and folding it each takes seconds. I keep mine folded and in the original box when I'm not using it. It is about as compact as my baking stone.

Can you tell me the brand you purchased?

I want to add it to my wish list.

I have the Brod & Taylor Folding Proofer. I ordered it directly off their web site. Go to http://brodandtaylor.com/

Thanks David.  I will add this to my wish list.  I'm sure once I buy one I will not regret it.

Hi David! I am new to Rye doughs and am fascinated with your recipe and photos. One question I have is in regards to the machine mixing portion of the recipe. I do not have a dough mixer. What are some signs I should look for if I decide to do this step by hand? Is its main function to redistribute ingredients, build strength, or both? I understand the dough is likely to be very sticky and challenging to work with. However, any development clues would be appreciated. Thanks!

With this type of rye, my notion is that distribution of ingredients is the main purpose of mixing. I guess you have to use visual clues to determine how much mixing is enough.

The dough is super sticky! My current method is to wet the board and to keep my hands and bench knife wet.

Usually, I advise new rye bakers to ease into rye, starting with a 40% rye and working up to 70-80-90% as comfortable. Previous experience with high-hydration wheat flour doughs might help psychologically, but rye is a very different handling experience.

Thank you David for this clear & easy to follow recipe of using Detmolder 3 stage levain process.  It feels like I have been looking for such an article for as long as it has been posted.  My last three breads have been 100% rye using Patrick Ryan's video and then Jane Mason's recipe from Homemade Sourdough, finally the honey butter 100% rye from Nourished Kitchen.

I am always looking for more sour and flavor to help offset my low sodium diet.  Your directions look promising.  Thank you for your time and effort in helping other bread enthusiasts.