I've done a bit of searching in the forums, but haven't quite found an answer to this one.

Hubby prefers fresh, fresh FRESH moist bread. No matter how carefully I freeze freshly baked loaves, there is always a difference between the freshly baked ones and the previously frozen ones. Since I don't have enough time to mix and bake every couple of days, I'm wondering about freezing pre-shaped dough.

First of all, will freezing sourdough in the dough state kill the yeast? I've read some posts that say it will, and others that say they've had no problem with this.

If not, would it be best to freeze it after an overnight retard or to stick it straight in the freezer (carefully wrapped, of course)?

I tried this over the weekend, and my frozen loaf rose very slowly -- but so did the fresh one. (I froze it right after kneading and shaping.)  I'm pretty sure the starter wasn't mature enough (tried to hurry the process, and that rarely if ever works!). Thought it might be best to seek some wisdom before I try again.

Any insights are much appreciated! :)

Freezing the dough won't kill the yeast - you probably already know that the starter itself can be dried, frozen (almost indefinitely) and be reconstituted when required.

I imagine you'd save more time by mixing a large batch of dough, letting it rise (retarded or not) and then freezing it in loaf-sized portions.  Then defrost, shape and prove. But it's never occurred to me to try it. I'm intrigued; do let us know how you get on :)

Baked bread should be frozen as soon as possible after baking. The freezer should be set cold enough that the breads interior temp can reach -8 within the first hour. At this temp the staling rate is very slow, but I would use it within 3-4 weeks for best flavour. If you want to freeze a dough, increase the percentage of sour/leaven, or add a small amount 1-2% instant yeast to the mix and freeze the dough immediately after mixing. Just speculation, as I've never frozen any of my own doughs, but it may result in a very nicely flavoured loaf once it's had a full fermentation at room temp. I'm as curious as Neil to know what your results show.

I have never had much luck freezing yeast dough and I would imagine that sourdough would be an even a worse bet.  I found that freezing the dough would make for a much denser loaf and the quality that I expected just wasn't there.

When distributing food, we stored frozen 80% to 95% proofed yeasted dough, unbaked at -10 F, and chefs managed to bake it off after finishing the proof no problems or worries. The boxes always said to store below o F for some reason.   We tried to keep stock on hand at no more than 30 days if possible - but we did that with all frozen items.

I have used European style buns like that but I think they are able to freeze the dough so quick that it puts a stop to yeast activity much faster than you can by putting it in your freezer.  With those buns it was recomended not to have them out of the oven longer than 10 minutes before they went in the oven.  If you allowed them to thaw they pretty much flattened.

un-proofed breads you can buy frozen at the grocery store - many kinds actually.  My daughter buys little frozen balls of dough  in a bag to make rolls - 2 balls to a muffin tin (24 to make a dozen rolls) and my mom used to buy bread dough you plopped in a standard bread pan and let it rise.    Both seem to work fine.  Since they weren't final proofed and were at home temps, instead of warehouse temps, they had some way to keep the yeast alive.

The ones we distributed, including the many frozen customer specific breads of all kinds, were flash frozen at some stage of proofing like the ones you are used and would go flat if you left them out of teh freezer too long.  A few were un-proofed and flash frozen for proofing at the customer.  Each resturant chain had their own way of doing frozen bread.

Cold doesn't seem to affect the yeast they use for these breads.  It must be a special commercial one of some kind?

Thanks to everyone for your insightful comments. I really appreciate the different approaches so generously offered, and hope to update as different suggestions are employed.

Right now, there are three quick-frozen loaves' worth of dough in the chest freezer awaiting resuscitaion (hopeful resuscitation, anyway). Kind of feels like a science experiment. :)

If they don't fare so well...we're not out of ideas!

As promised, here is a follow-up to the dough freezing experiment.

It works! Today I baked the first of three loaves frozen right after mixing. Thawed it out yesterday and shaped it, placed it in a loaf pan overnight in the fridge, then proofed and baked today. It rose fine, had decent oven spring, is moist and very tasty. Granted, it was frozen for only 4 days, so we'll see how successive frozen loaves bake up.

Photos follow just for fun. It's a humble loaf of sandwich bread and not the most beautiful one at that, but you'll get the general idea. It was baked in a Pyrex loaf pan, with a composition of  approximately 75% fresh-milled whole wheat (1/2 white and 1/2 red) and 25% spelt, except for 1/2 cup of 100% hydration starter (utilizing Gold Medal bread flour). 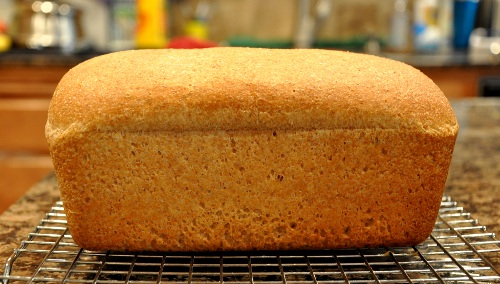 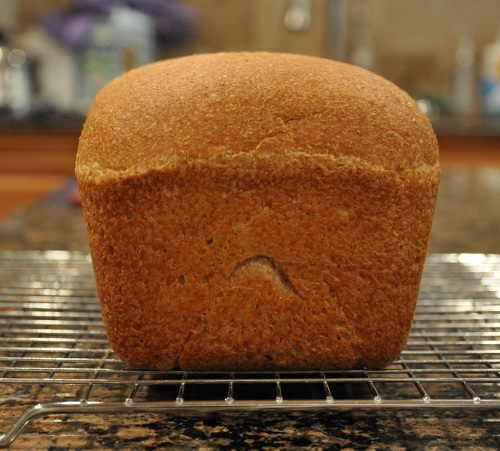 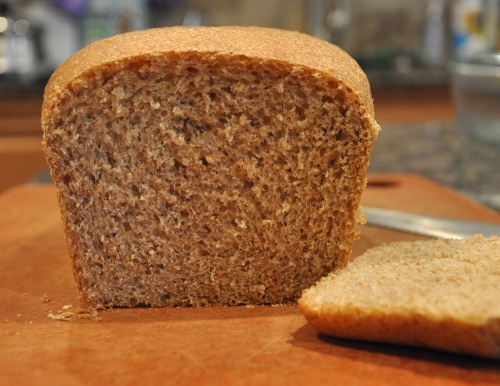 Thanks everyone for your insights! I'm not done experimenting yet, so time will tell more. I do think Davo's solution is probably the easiest, so that must be tried out as well.

Thought I'd best update this thread now that a month and a half or so has passed.

The first three loaves' worth of dough I froze baked up nicely, but they were thawed and baked rather quickly -- within a week or so.

I mixed up another, larger batch of dough just before our mixer went out for repairs, and it had the opportunity to sit a bit longer in the freezer. I noticed that once the dough had been frozen for about two weeks, the yeast was far less robust. It took a very long time to get loaves to rise (just about all day once I got to loaf #5 out of 6), and even then the rise was meager. Oven spring? Pretty much nothing. Granted, somehow I forgot to add salt to the dough on its initial mix and had to knead it into each individual loaf as it thawed enough to be workable. I'm not sure this would have affected the strength of the yeast, however.

The first couple of loaves from this batch were fine (and had no yeast kneaded into them). The third, fourth and fifth were increasingly dismal. I don't know what I'll do with the sixth, yet frozen! Maybe knead in some instant yeast along with the salt?

So, it seems Gerhard was right. Or perhaps things might have gone better if the dough portions could have been flash frozen.

My conclusion for now is that bread dough (at least the sourdough variety) should be thawed, proofed and baked within a week or so of freezing -- at least the non quick-frozen type.

Community Bake - The Approachable Loaf by The...
Whole wheat poolish country loaf
Easiest Way To Sub in Yeast
Which Whole Wheat for Sifting - Blend in with...
Can All Breads Be No Knead??
END_OF_DOCUMENT_TOKEN_TO_BE_REPLACED