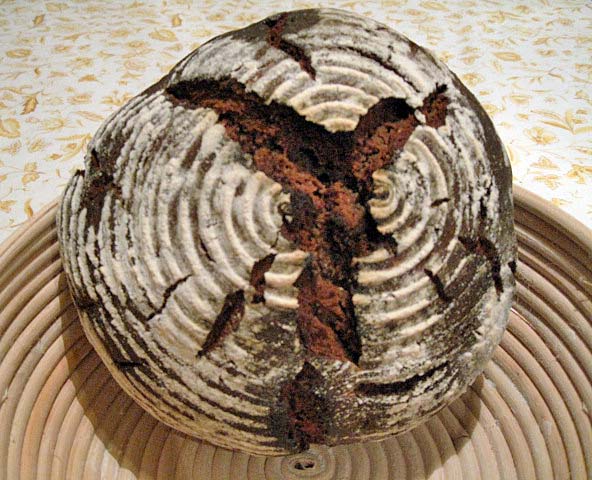 It has been almost a year since I first made the “80% Sourdough Rye with Rye-Flour Soaker” from Hamelman's Bread. At the time, I said it was my new favorite high-percentage rye bread, and I can't say its status has changed. Actually, it's been a while since I have made a high-percentage rye bread. I've been thinking about it, but Codruta's lovely bake of this bread finally inspired me sufficiently to do it.

There are some surprising things about the dough for this bread. Hamelman describes it as “loose and sticky,” but the last time I made it, I now recall, both the hot rye soaker and the final dough were less loose and less sticky than I thought they should be. Looking back at my notes of last November, I said I would double check the numbers in the “Home” version of the formula, which I used, against the formula Hamelman provides for a larger production. Well, the numbers check out okay. I also looked at the Errata Sheet Hamelman made available in May, 2010, and there are no corrections to the formula for this bread.

Hmmm … Maybe my whole grain rye flour is thirstier than Hamelman's. In any case, I did add an extra 1/4 cup (2 oz) of water during the mixing of the final dough, which took the total dough hydration from 78% to 84% hydration. 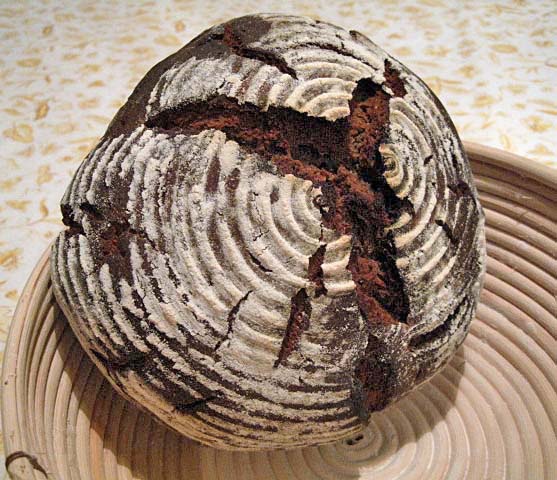 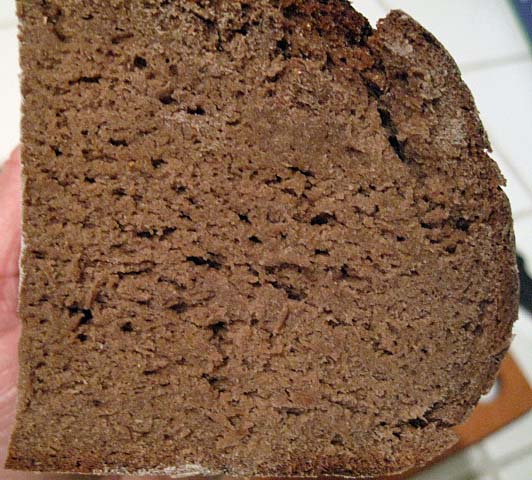 The crumb was dense and a bit sticky. My analysis is that the dough was under-fermented, and the loaf was under-baked. This loaf is larger than what Hamelman specified, and, in hindsight, should have baked longer, probably with an additional lowering of the oven temperature for the last portion of the bake.

The flavor, on the other hand, was assertively sour with a delicious earthy rye flavor. I'm hoping that toasting can salvage this bread. Otherwise, I have an abundant supply to use as altus in future rye bakes.

When well-made, this bread is best, in my opinion, sliced thin and eaten with smoked meats or fish, pickled fish, strong or smoked cheeses and dark, braised meats. It has amazing keeping qualities and also freezes well.

David, another wonderful example of 80% rye bread. Your notes are quite similar with my own observations: I did add an extra amount of water in the soaker, I increased the hydration to 83% (and I think an extra +1% would have been better).

Why did you changed weight in oz? I was so used with your formulas in grams... that's just a curiosity, I can still follow your bakers percents.

Can you please describe how you transfer the wet dough from your hands in the floured banneton. I assume that you flour very carefully the bannetons, or is there another trick?

Anyway, your bread is spectacular, and I can't wait to see the crumb. As I said it before, and I will say it a thousand times, you are a continuous tremendous source of inspiration for me.

Your lovely bake of this bread did inspire me.

I shaped the dough with wet hands, partly on a wet board and partly "in the air." Transfering to the brotform was no problem. I dust my brotform fairly heavily for rye breads with a 50/50 mix of AP/Rice flour. I use a flour shaker with a perforated top to do the dusting.

And thanks for your kind words. The inspiration is clearly reciprocal. You are showing us some beautiful breads you have baked.

A lot of people seem to be in the mood for rye recently.  Mayb the sign the winter is approaching? :p

Really beautiful loaf, David.  It's amazing the flour sucked up 84% water!  And the dough wasn't too sticky to handle even with that hydration?

The dough was actually on the dry side, considering the hydration. It was tacky but not really very sticky. The flours I used must have sucked up a lot of water.

Yes. The house was full of the aroma of baking rye.

Otherwise, I have an abundant supply to use as altus in future rye bakes

can you point some formulas that you made before with altus involved (I know mini oven's 100% rye, but I'm not sure I'm ready for 100%, yet)? I am asking, because I made another 80% rye, beautiful before baking, acceptable-looking- on-the-outside after baking, not so sure about the inside... I cut it in two after 24 hours, and the crumb feels stickier than it was on the previous one. I did not taste it yet, tomorrow will be 48 hours, and I'll have some for breakfast. Anyway, I need a back-up plan, just in case...

Can a rye bread be under-done if the internal temperature was 98C?

How was yours, toasted? did the toasting salvage it?

Awwwww ... It apparently is possible to have gotten to the right temperature and still have a sticky crumb. Whether it is actually due to underbaking or a starch attack or rye gremlins, I don't know. I'm sorry to report that toasting resulted in hot sticky rye bread.  I'm sorry to hear your bread suffered from whatever it was. It's comforting only on the "misery loves company" basis.

I have used altus on Jewish Sour Rye, Jewish-style Pumpernickel and Corn Rye breads, as well as some German-style ryes. I think just about any rye bread would be better with altus.

Andy and Mini O will hopefully contribute from their greater fund of knowledge.

We were in Sicily when you posted this, so sorry I'm late finding it.

I have a couple of ideas to throw out for you.

Regarding the thirst of your rye flour, the variance is commonplace, I find.   Ending up with 84% hydration is absolutely fine.   When you get over 90%, then start to ask questions; but, generally, 85% hydration is where I hope to be.   Your diagnosis to add the extra water to the soaker is something I would agree with.

The worry about over-absorbent rye flour is that the starch damage is too high, so the flour quality is low.   This is why you end up with gummy bread.   Pentosans cannot support the starch molecules, ferment is too rapid, and everything goes pear-shaped!

I have 2 ideas about your bread, neither of which provide definitive reason for the problems with the crumb, but both are at least worthy of consideration.

Firstly is your mixing technique.   I have never even considered using the dough hook for mixing rye breads at this high a level.   In fact, that indicates the mix is too tight for what I am used to.   Paddle only.   I'm sure Khalid has counselled about over-mixing rye.   I think this may be a part of the problem.

Leading to poor crumb structure.   This results in some degree of collapse in the baking cycle.   As a result the dough becomes too dense, and thus it is impossible to bake out the loaf properly.

The crust looks fantastic, David.   I am just trying to diagnose what has happened in the crumb of your loaf.

I know you have made Hans' formula since, with really great results too.

takes his holidays!   :)   David, Sorry, didn't know you were looking for input until today.  Normally your posts are pure inspiration!   I just breezed over it I guess.  Saw that beautiful crackly bold bake and thought about biting into it and... I eat "low carb" and I know your posts (esp. a rye post) could drive me crazy!   Sorry.

Critique Time!   What fun!  ... Andy beat me to the details.  He knows more what goes on and can explain much better.

I agree.  I can also add that this can happen often, seen it enough.  Your crumb doesn't look so bad, it is even (not overfermented) 'seen worse!  Because it does happen on occasion even with our good Austrian flour, I would swing more toward the over mixing as the problem if you've baked some successful loaves with this particular flour before.  Then again, if you had a self standing dough at 85% hydration... too much starch damage.  I thought it interesting to read that a certain amount of starch damage is actually created, controlled by the miller.   Too much or too little can be a problem.  Constant quality control is a must!

The stick to the teeth feeling can be reduced with a spread of some kind served on the bread.  Open faced.  Letting the slices air dry a little bit also helps.

This time of the year, one can take the gummy crumb (it easily just pulls out) and combine with rum and cocoa to make rum balls.  Whiskey is also not bad.  Roll in cocoa or chopped nuts to finish.  The crust is more or less recycled into more bread.  The gummy crumb can also be recycled into feeding starters.   Butter the knife between slices and wash it immediately after cutting.  There are agreeable levels of gumminess.

Codrutra, about my favorite formula and 80% rye.   Same ratio only use 20% of the flour as wheat bread flour.  For 150g starter that works out to about 100g bread flour.  Whisk bread flour well into the water and let it just sit there for 20-30 minutes before stirring again and adding starter & rye flour.  This gives the gluten in the wheat time to soak up water and develop.  I've never been able to get this 83-85% hyd. dough to stand up on its own having to use a form of one kind or another.