I am looking to buy a standalone electric meat grinder (not a stand mixer attachment).  I have scoured Amazon's selection for hours on end and cannot tell which one of those with a moderate price is best.  I am wanting to grind poultry, pork, and perhaps lamb or beef, for meatballs, meatloaves, steamed meat dumplings, sausage patties, etc.  Stuffing sausage casings is not something I am interested in doing.

Having a small kitchen and an even smaller pantry, I prefer tools that serve more than one purpose.  Thus, I find that my food processor does a great job "grinding meat".  Cook's Illustrated has even recommended this method for chopping beef and chicken for burgers, and I have used it for meatloaf and meatballs.  The trick is to freeze the meat slightly before chopping so you don't end up with a fatty mess.  I have even thought about buying a grinder attachment for my KA, but I am very happy with the results I get from the processor.  Just a thought!  Good luck!

My husband hunts and I have processed up to 100 pounds of meat at a time with this grinder. It is a real work horse.
I do make and stuff sausage with it, we have a smokehouse and enjoy making our own smoked sausage.

When I first got it I was used to a hand crank model and there is a bit of a learning curve with it. There were no instructions with it so it was a bit like the blind leading the blind until I figured out which blades and attachments I liked the best.

If you are going to be grinding a couple of pounds of meat at a time I would go with a table mounted, hand crank model. I have used one for years and it's still the one I go for when I'm just grinding a few pounds of meat. The only time I drag out the electric grinder is when I processing a whole animal.

I have my mother's old Universal hand-crank meat grinder, but I can't find the blade in my messy basement.  It's certainly rusty and probably dull by now, anyway.  It's at least 50 years old, and possibly much more depending on where my mother got it.  I've kept it for emergencies, although I can't imagine what that would be since I have lived without a working meat grinder for a couple of decades now on account of the missing blade.

In the end, I got a Waring Pro MG800.  Today I ground a pound each of frozen broccoli and semi-frozen pork tenderloin.  It seemed to work fine.  The pusher is lame, being also the storage container for the sausage nozzles and therefore a nuisance to clean after use since it is not watertight.  Aside from that, I am satisfied.

Well, my Waring Pro grinder did not survive its first jam. Even though I immediately reversed the motor and cleared the screw of the offending material, the plastic gears were evidentially already damaged. The odd thing is that the grinder worked for the rest of that session, but the next time I went to use it would only grind about three pieces of lean stew meat at a time before the screw stalled and had to be restarted. I guess something plastic that was only cracked fell apart when I moved it to and from storage. Repair is impossible locally. Waring recommended that I ship it to Connecticut for repair.

Needing a fast replacement, I bought a Deni grinder on sale for half the price of the Waring Pro. I thought it would suffice for simple grinding if I was careful. It is smaller, less effective, and messy. It will work in emergencies, I will give it that. What I don't give it is even as long to break as the Waring Pro. The thing smells like an overheated motor the entire time it is running, even with nothing in the hopper.

Next I am going to buy a Weston, made with metal gears and costing three times as much as the Waring Pro. I guess I should have bought a Weston in the first place, but I had no idea grinding ordinary food required such a heavy duty machine. I mean, we aren't talking chicken necks here.

The Weston is magnificent. Not only does it grind meat, fish, and broccoli without even noticing it, but it quickly makes 1/2" meat cubes with this larger grinder plate that I bought. I have to get my husband to lift it for me if it needs moving, but he is more than happy to since he doesn't have to cube 16 pounds of meat by hand every month now. It's so nice to finally have something labeled "Pro" that apparently really is professional quality. 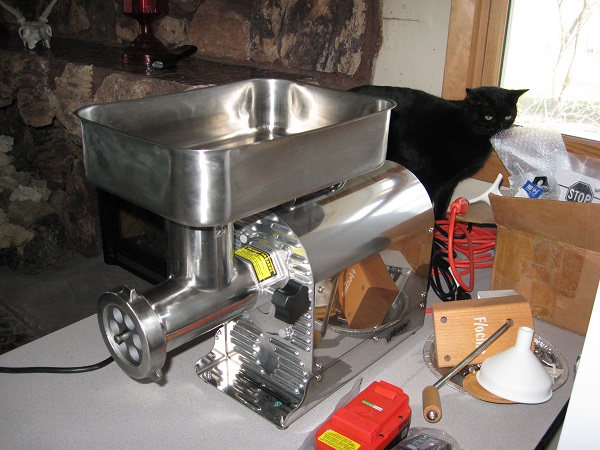 Not yet, little kitty, but I've read up on it.

Emanating from the photo below: "Can one have one's monkey slaves produce gushy food without a can? Why were we not informed of this before now?"

A Meat Grinder is very useful unit for a small family and it can give the best grinding meat without any health hazard. People can get their favorite dishes from it. It is very easy to use. Recently I bought an electric meat grinder and it works superb.

I've had a Tor Rey (Pro Cut) for some 20+ years without any problems. We've mad hundreds of pounds of sausage without any concerns. http://www.butcher-packer.com/index.php?main_page=product_info&cPath=18_75&products_id=196

Community Bake - Baguettes by Alfanso
Starter is very active but dough will simply NOT...
I feel like I'm not getting enough gluten...
Beginner sourdough recipe...HELP!
Issues with getting a loaf right (suspicion:...
END_OF_DOCUMENT_TOKEN_TO_BE_REPLACED