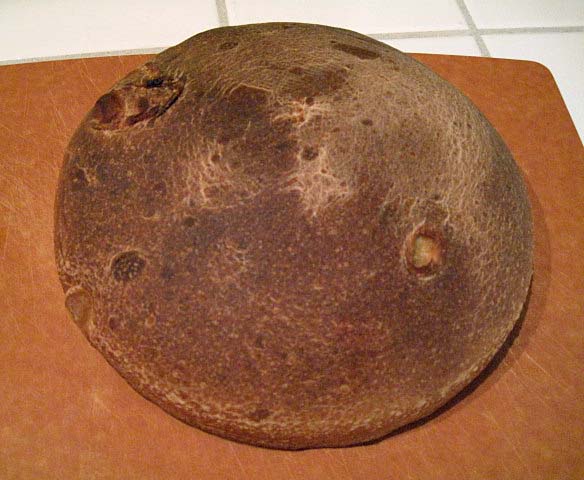 Maggie Glezer describes this Greek Country Bread as the “daily bread” of the Jewish community of Thessaloniki, almost all of whom were deported to Auschwitz by the Nazis during WW II. Glezer got the recipe from Riva Shabetai, who was a Holocaust survivor. Thessaloniki is currently the second largest city in Greece. It was settled by Jews expelled from Spain in 1492 and thrived for almost 500 years. Its culture had many Spanish influences in language, cuisine and customs.

The dough is 67% hydration and is enriched with sugar and olive oil. It is formed into boules, then, after bulk fermentation, it is proofed and baked in oiled cake pans, a technique I have not seen used except with Greek breads. Glezer provides both a yeasted and a sourdough version of Pan de Horiadaki. I made the sourdough version. The method is remarkable in that the bulk fermentation is short relative to the proofing time. 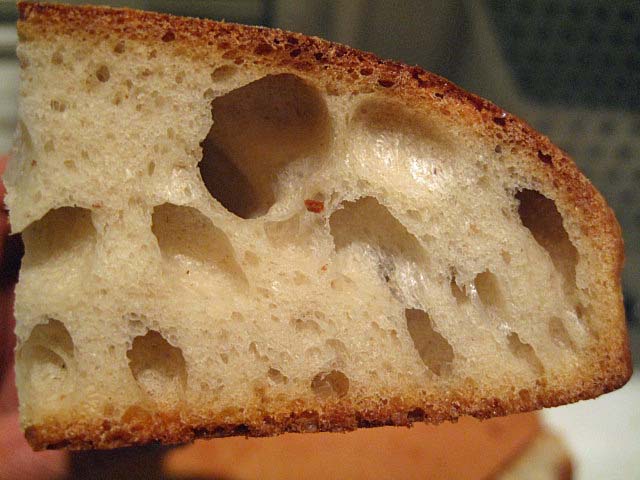 Note the dull (not shiny) crust. This is from baking without steam, as Glezer specifies. I personally prefer a somewhat shinier crust, so I may bake this bread with steam next time.

The crust is relatively thick from the long bake and very crunchy. The crumb is chewy. The flavor is exceptional, enhanced I'm sure by the sugar and olive oil. There is no detectible sourdough tang, just a sweet, wheaty flavor. I expect this bread to make outstanding toast and sandwiches, but it is delicious just as is.

Note to brother Glenn: If you liked the other Greek bread I made, you will love this one. I don't suppose it would be a crime to coat it with sesame seeds either, but the flavor is so nice as it is, it would be almost a shame to mask it with other strong flavors.

Nice bake.  I probably would like this bread, with or without sesame seeds.  The dough is less enriched than the Psomi you posted about before, and the crumb much more open.

This is a much less dense loaf than the psomi. I'll toast some for breakfast tomorrow, and I expect it to be delicious with almond butter and apricot jam.

Shortened BF time on account of your active leaven.   Use it a lot in the long term, and it becomes buoyant.

I see it's been borrowed and posted all over the internet...already!

Your comment prompted me to google "pan de horiadaki." It seems TFL is being monitored by many web sites that collect baking/cooking postings on the web. Interesting.

Glezer's instructions for this bread result in what we would usually regard as over-proofing. Thus, the bread is not scored. It is baked without steam. There is still moderate oven spring. I would emphasize the importance of forming a tight boule in order to support the oven spring in this rather gassy dough.

In contrast to the Psomi I baked previously, this bread is very light in weight for its volume.

That's exactly what I did David!

"Food Full" have been borrowing my work too, of late.

Such theft is somewhat annoying to me!

and wonderful to participate in making sure it continues to be baked.   Terrific texture as well.  -Varda

Almond butter and apricot jam... sounds delicious, David.  I really like the look of that crumb.  Interesting background information.

When I have more time, I will bake this particular recipe since my baking lists is getting longer each day. I will wait for your comparison first (steam or no steam) and I hope you can report back your result. Thank you.

Besides the aesthetics, my reasoning is that this bread was probably baked in a WFO traditionally, which provides a somewhat steamy environment just from evaporation. I don't know when I'll bake this again, but I'll post the results when I do.

I also want to get a couple 8 inch cake pans, since this should result in a more spherical loaf than the 9 inch pans.

Interesting formula, David! I love the very thick crust and the open crumb! This bread reminds me of the breads my grandma used to make in an WFO, many years ago. She used to oil the pans, too, and the crust had a wonderful flavour.

The long fermentation time is because the small amount of the prefermented flour, I guess. It's only 10,8% prefermented flour in the final dough. Do you think it's a bad idea to proof the shaped dough in the fridge overnight? I don't think I can fit in my schedule 1h autolyse, 2h bulk fermentation, 5h final proof, and 1h baking.

Do you have your grandmother's bread recipes?

If I were to cold retard these loaves, I think I'd do it right after they are shaped. The fully proofed loaves are so gassy, I'd be afraid to retard them. If you retard the loaves right after shaping, it would probably take an extra hour for the final proof. But, "watch the dough, not the clock."

If you try this, please let us know how it turns out.

yes David, that's want I meant... to retard them after they are shaped (my english is not very good, hence the missunderstanding). I'm preparing the levain right now , I'll shape the breads tonight, and tomorrw morning I'll bake them. Do you think I should use steam or not?

As I said in my original post, I would bake with steam next time. However, it worked well without steam, except for the dull-appearing crust.

About my grandmother's recipe... I'll talk with my aunt and my father, maybe they remember the formula: I only remember how the bread was made (as a child, I assisted to the process, fascinated), not the ratio of ingredients. The flour was from a mill in the village, where every farmer brought their grains and received the flour instead. It was a very good flour, so they said. For the bread, my grandmather used a pate fermentee, which was actually an old dough, dried, kept from the previous batch of dough. They baked bread every saturday, but the process began friday afternoon, when the dry old dough was rehydrated. The breads were really big, 3-4 kg, each, and she allways made 3 loafs. One for herself, one for my father and one for my aunt. I'll try to find more details, and I'll come back with news.

david, you can see here how my bread turned out. I made a lot of mistakes along the way, it's not as beautiful as yours, but I'll make it again, cause the flavor given by long fermenation and olive oil is very very pleasant.

thank you again for instructions and support. codruta

Late in finding this formula....my ususal to bake list is growing rather than decreasing so this is in line BUT I did want to make a comment about your instructions in your 'method' section; instructed to cover with plastic-crap.  I got tired of the stuff and have been on the look out for an easier and less wasteful solution.

I found several different types of, what I call, mini-shower cap type covers.  Prices were all over the place as was quality.

What I have finally settled on are these:

I have liked the products I have received from the site.  People are helpful and shipping is quick with easy tracking.