I don't know how many different formula's for baguettes I've tried, but the one with the best flavor was that for the Pain à l'Anciènne of Phillip Gosselin. (See: http://www.thefreshloaf.com/node/8524/philippe-gosselin039s-pain-à-l039ancienne-according-peter-reinhart-interpretted-dmsnyder-m).

During our recent visit to Paris, one of the breads we had was Gosselin's Baguette Tradition, and it was very similar to the Pain à l'Anciènne I had made. The differences were that the crumb was more open, chewier and had a mild sourdough tang. I don't know whether Gosselin makes his Baguette Tradition using the same long cold retardation as employed in his Pain à l'Anciènne, but I suspect he does.

Gosselin's Baguette Tradition from the bakery on Rue Caumartin

Today, I made baguettes using the Gosselin technique, but I substituted a liquid levain for the yeast … well, I did also spike the dough with a little instant yeast to better control the fermentation time.

Note: Accounting for the flour and water in the levain, the total flour is 500 g and the total water is 375 g, making the actual dough hydration 75%. The actual salt percentage is 1.75%. 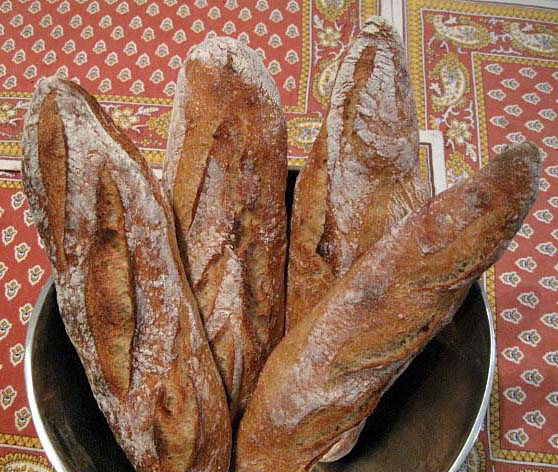 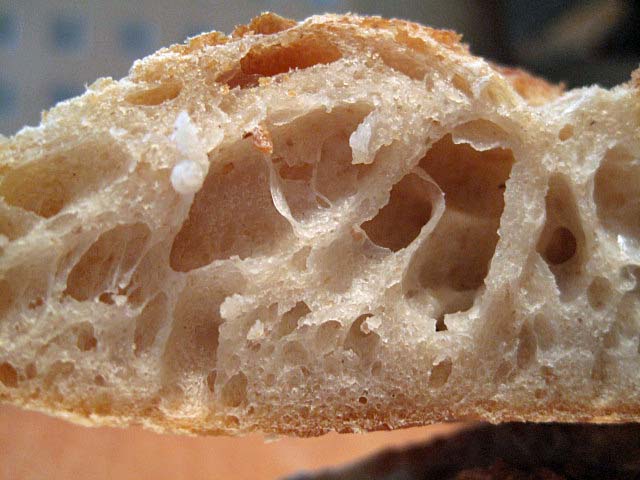 The crust was crunchy and the crumb was nicely open and chewy. It was moderately sour but with nice sweet flavors as well. All in all, it was quite similar to the baguette tradition we had from Gosselin's bakery. The loaves are smaller with proportionately more crust than crumb. The crust was a bit thinner, and the crumb a bit chewier. My totally unbiased, super taster spouse declared it “much better” than what we had in Paris. I don't know about that, but it is quite good – close to my notion of a perfect sourdough baguette - and I expect to make it again and again.

I'm still getting used to this bread lingo. Does your call for "liquid levain" imply 200g of 100% hydration sourdough starter? And when does the yeast go in?

Yes. The liquid levain is 100% hydration.

The yeast, which is really optional, is added In Method step 2. Thanks for pointing out that omission.

Those are beautiful.  I should try that formula next time I bake baguettes.  I may have to swing by Paris first just to make sure I get the right flavor and texture.

I'll have yours over Gosselin's anytime, David.

We make a variation of the Pain à l'Anciènne at work, it has such a nice almost sweet fragrance when it comes out of the oven each morning. It's a smell I can really enjoy at 3 a.m. One thing I often considered is using pate fermentee in the next days batch. Do you think by chance Gosselin might do this to evoke that semi-sour you are tasting?

My understanding was that "baguette tradition" in boulangerie parlance implies levain-raised bread. However, I find that there is, in fact, a French government definition which defines these as simply baguettes without additives, that are made on the premises and have never been frozen.

So, I suppose, Gosselin may make his with some other pre-ferment than levain. In any case, I do like those I made au levain.

Hi David,
I'm in the line behind Sue.

I realise there is only photographic evidence to go on, but the crumb in the Gosselin baguette is not what I would be looking to re-produce.
The dough is too old and the protease activity clearly detrimental.
My personal opinion, I know. But your effort is in a whole different class!

You are too kind, but I would never argue with your authoritative assessment. ;-)

Hello David,
Those baguettes look so delicious. The flavor you describe sounds fantastic.
from breadsong

Your baguettes look and sound very delicious.  I agree with Andy about the GBT crumb photo!

Great Baguette, much better than the Paris version, Chef. David!

Lovely open crumb, David.  And I am sure they tasted delicious.  Nice work.

Your baguettes looks absolutely perfect, I don't think that anyone can do better than that! And I tend to believe your wife, about the taste of these and Gosselin's. (I bought one baguette from Gosselin two years ago, and my boyfriend was very dissapointed when he tasted it after a few hours- he said that mine are much much better, and I'm not a master of baguettes, quite the contrary)

thanx for sharing this recipe, david, maybe I'll give it a try, but I suspect is over my aptitude at the moment...

I realize this is a high hydration dough, but even after five S&F, my efforts have been nearly "pourable",  akin to ciabatta. I notice that in your photos the baguettes are slashed, but even with the most delicate hand, I couldn't slash mine. I have high humidity conditions and temperatures (Hawaii). Where in the process should I add some more flour? Were you able to tighten the shapes with your outstanding-looking loaves, or are these destined to be free-form?

Thanks for your example and your help.

The dough should be slack and sticky, but not pourable. You may need to use less water (not more flour) and more S&F's in your climate.

These baguettes are not "shaped" in any real sense. You pat or stretch the dough, well-floured, into a rectangle on the floured board. You then divide it with a bench knife into 4 equal pieces. Each piece is then stretched to 12-14 inches in length and immediately placed on your peel or a sheet of parchment to load into the oven.

With a dough this slack, scoring is optional and never perfect as the usual 65-70% hydration baguette.

Looks delicious!  Would like to try it!  Please excuse my ignorance, what exactly is Ice Water?  Just really cold water or is there something more to it?

Thanks for your help!

Put 8 ice cubes in a 1 qt. bowl. Fill the bowl with water. Let the bowl stand for 5 minutes. Pour off the water and measure the amount you need for the dough.

I am going to try my luck at this lovely formula. I do have a question about your "shaping". When you say stretching, do you do any fold at all or just a loose stretch like I've seen in Ciabatta? Your breads are beautiful! Sitka Baker

Great....think I am getting the hang of this. Thanks for your tips...Sitka Baker. Did you by chance see the photos I posted of my Stirato...still unable to get the open crumb you get in your breads. Sitka Baker

Don't know why it took me so long to try your version of a baguette but I'm glad I finally did. It is so easy and even after adding the yeast you can make two baguettes , put it back in the fridge for a few days and it still comes out perfect. I do let the  initial dough come up to room temp before adding the yeast , water and salt but otherwise follow the recipe. A perfect baguette , many thanks

Am I understanding this correctly: You stretch out the baguette shapes and then do not proof further at all? Just bake immediately? (and it works so well?) I am getting ready to do these now.....Thank you for this recipe David!

Let us know how they turn out for you!

I did it with your great recipe!  I went to school in Paris for three years and to Berkeley for four years but I could not bring myself to like sourdough baguettes. Just did not jive for me. But this bread really worked for me (and my family). The flavor and texture was delicate, nice eating. I am actually more excited about it than I may sound.  :) :) In the next post I want to ask some questions, because i am so inexperienced..maybe if you have time

I wanted ask a few questions about making this kind of bread, if I may:

1) About the first mixing.  I added the levain to the water, added flour on top and mixed for about 2 mins at #1 of my KA to bring it together.  When I checked with my fingers there were hard lumps throughout even though the surface seemed smooth.  I worked the dough with the tips of my fingers to smooth out the lumps for a few mins and by the end the dough was quite developed. That did not seem to matter, bread was fine.  But can one whisk the levain into the water (levain kind of dissolves) and then mix in the flour to make it simpler?  I imagine this is not the same as the first. When you whisk the levain into the water you are adding the microorganisms and hydrated flour but no longer the gluten network (I guess?).  What do you do?

2) Just stretching proofed dough into long pieces and no tension building shaping or further proofing was a first for me! Almost all recipes have you shape the dough somewhat after proofing and then proof some more before baking.  Nury's light rye (you speak of this bread fondly often) is another recipe like this.  What is the rational or goal for treating the dough like this? And not the usual shaping + proofing protocol?  It makes life so easy and I did get an extraordinary open crumb.  Does this work for all wet doughs 75% hydration or more?

3) I noticed that the smaller loves, with more crust to crumb, and specially at the ends of the loaves had the most open crumb.  I had one bigger, thicker baguette, it never got that open a crumb.  Why is that?

4) If I could wish for one thing...it would be make the bread a little less chewy overall.  Is there a way to do that?

Now, to your questions:

1. When mixing a bread with a liquid levain, I always dissolve the levain in the water before adding the flour. I use a "Danish Dough Whisk" for mixing by hand. I mix this dough completely by hand. No machine. If you feel little lumps in the dough, the French method of squeezing the dough between your fingers works best for me.

2. I think the lack of shaping is to avoid degassing. I won't generalize the method to all high-hydration doughs. Most of the ones I make, I do pre-shape and shape.

3. I don't have an answer to this. I suspect it has to do with dough handling more than anything else.

4. To get less chewy crumb, hand mix rather than machine mix. Use lower-protein flour. There are other factors, but they involve avoiding errors, which I don't think you have made.

Thank you David for taking the time and answering all my questions.  This bread was a find for me.  Both for taste and how educational the recipe can be.  I think I will be able to vary flours, levains, shaping, here and there to learn much about ingredients and bread making and all the while I think the resulting breads will be quite edible!  The crumb has really stoked my confidence!

Now I am off to try the straight yeast version of this recipe of yours, I know I saw it somewhere.

What is the reason for using ice water? I can understand the first addition may be to slow fermentation while retarding overnight but the second addition of ice water has me perplexed as that’s when you are going for bulk fermentation. A mere 50g of ice water is not much but it has me baffled, especially as warmer water might help the salt melt into the dough more easily.

I don't know the answer to your question. I only know this formula makes really delicious baguettes.