Long before I had every heard the name 'Yeast Water', I actually had made a culture and had maintained it for months. In fact, I used a 1/4 tsp of the Potato Yeast Water (PYW) to jump-start my first Apple Yeast Water (AYW) culture. Link:

I had come across a YouTube video called a 'Potato Sourdough Starter' and I was curious. I grew it, but never tried the loaf that was given in the same series of videos, they simply had too much sugar for me to even want to try. Link:

Months later, after becoming involved with other Yeast Water (YW) I dumped the PYW for need of space and lack of usefulness. But, a little while back I thought I would close the loop and use AYW to jump-start and small test culture of PYW.

At this same time, I wanted to do a test loaf in my crazy attempt to make a Pullman pan shorter. I decided that I could use the excessive sugar called for in the PYW culture as part of a test sandwich loaf. I did just that, and both the Pullman 'Shorty' idea and the loaf work well. Link: 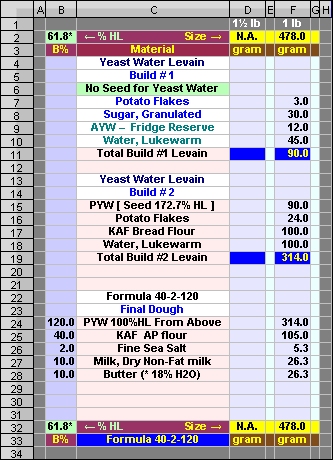 When Build-#1 was combined with the ingredients in Build-#2 all the sugar really set off a rapid rise in the levain. The rise was not above normal in the final dough. That seemed to confirm that it had to be the sugar that made the rapid growth. I further confirmed later,  in a second loaf, that was pure PYW –which also confirmed the AYW from the jump-start was uninvolved, as well. 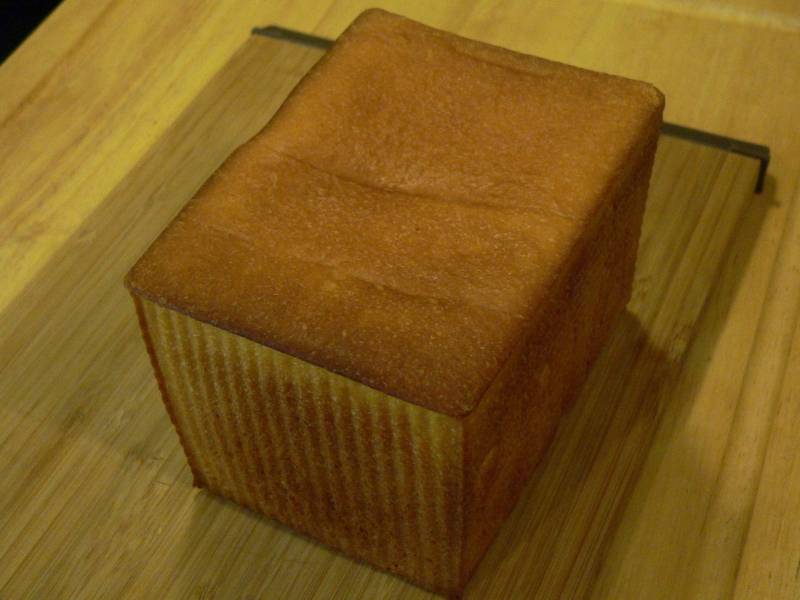 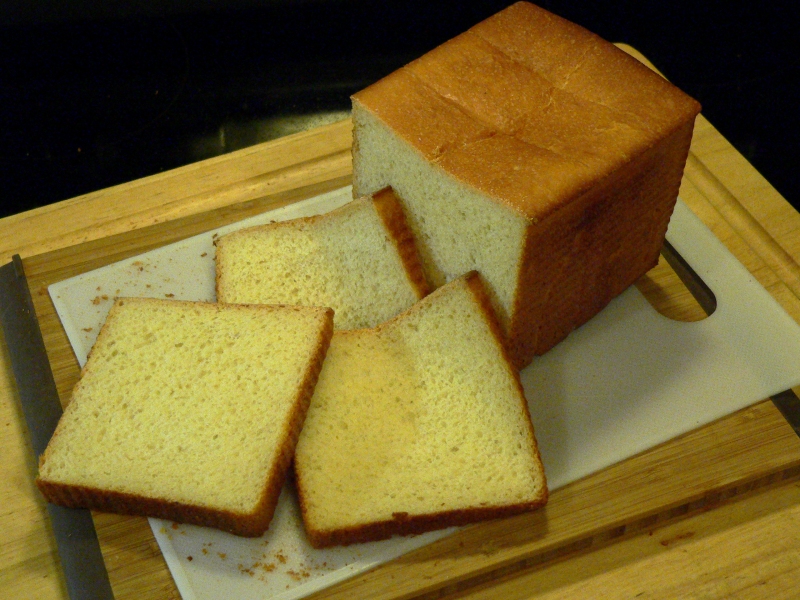 The softness of the bread can clearly be seen in the bending of the 2 slices against the balance of the loaf. 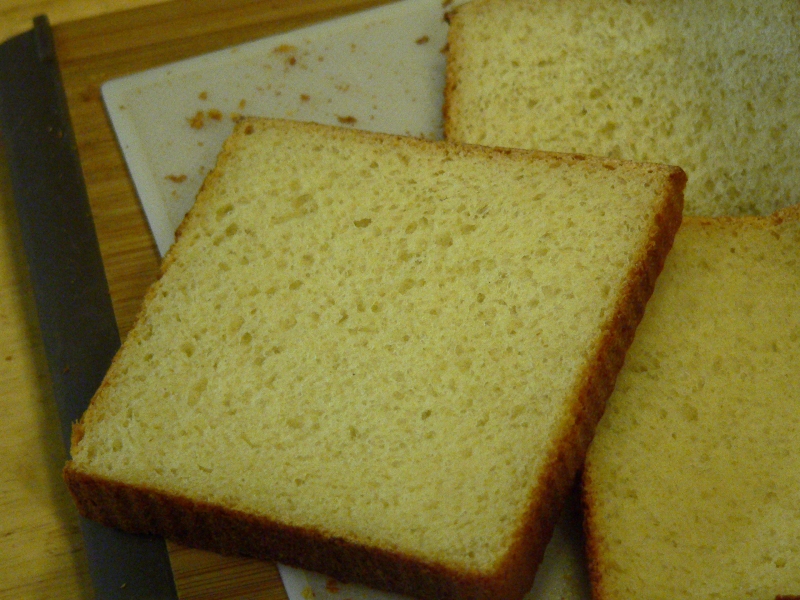 The crumb had a taste that was pleasant, moist, and with no trace of either sour or potato. It had a very good shelf life extending over the limited 'test period' of a bit over 3 days. As a toast, it was above average.

Although, I found PYW worked well, and made a good loaf, I decided that the making of the levain, and creating another YW seems unjustified just to introduce potato flakes and sugar into a loaf. Yesterday I tested an alternative made with Apricot YW that was, at least equal – if not better, in qualities and certainly simpler in the levain builds. But that is for another posting.

Additional information can be found in the form of loaf-log in PDF format on Google Docs. Link:

Lovely, Ron! So, what is all the fuss about yeast water thing? What virtues do you see in using fruit-based Yeast waters, as oppsosed to the good old flour based SD? Are they less Sour? healthier? tastier?

Seems you've mastered Water yeast cultures... do they ferment similar to flour based cultures..? Is baking with them convenient?

Khalid, I could ask why use any Rye, or WW, etc. and to some extent it is the same answer - greater degrees of creative choice.
I would never willingly give up "the good old flour based SD", but YW offers additional options on any given loaf. YW has no sourness, generally has a fuller fragrance, offers wider range in crumb color, is generally easier to maintain, and easier to start a culture. Once you have any culture, you can jump-start other cultures including a SD.

However, for myself, I find I am combining SD and YW in more levain builds. It can give a more interesting combination of loaf taste and texture. If you have not already done so, you might wish to see additional points in another post I did. Link:

I get some very strange problems in posting, of late???

Very nice loaf, Ron. Especially I like the color of the crust!!!  Nice touch to use the wood pan!!   The crumb's color is very nice, too. I like the crumb structure.  You did a really good job, Ron!

Akiko, shortening the pan length was the only practical way I could think of to make use of my Pullman pan  LOL

Incidentally I'm also making a sandwich loaf this weekend using the natural yeast starter I purchased from Japan.  As it's the first time I'm working with the product, I don't know what to expect...we shall see.

"Natural yeast starter" really could mean just about anything? Did they give details of what kind of "Natural"?

This is the much talked about leaven before yeast water became popular.  It smells lovely with a hint of sake.  It's in powder form and all I need is to add two part water to 1 part yeast.  I can't read the Japanese characters but it mentions "rice".   I can't wait to get home and start on this project.  Hoping to make a sandwich loaf with Earl Grey tea...  -Judy

Judy, I love Earl Grey tea, so please let us know how the loaf comes out.

just in time for breakfast... I've never produced loaves with such a high rise in the past.  Two s&f in the first two hrs of bulk fermentation and left it to ferment for a further 4 hrs. 2nd proof at 1.5 hrs. 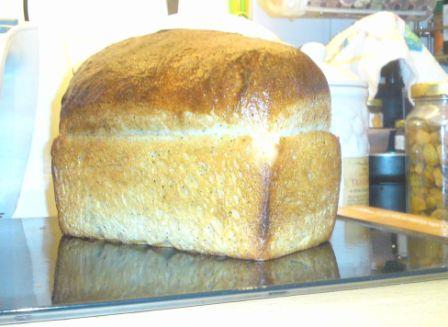 The crust is crisp, crumb shot to follow.   The black bits are tea leaves from one tea bag. 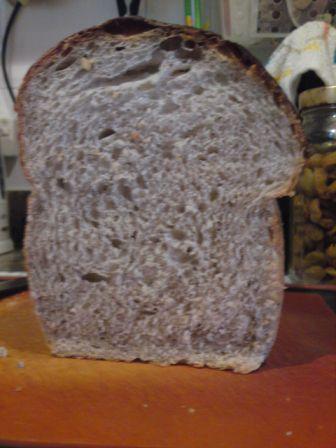 Tastes good with  a pat of butter  Will increase to three tea bags next time for a stronger flavour.   Total flour used, 400 grms.

Judy, you are on a roll. Very nice - good oven spring - and the crumb looks good too.

for the compliment.  I was surprised to see the rise.  With this result, I'm now confident to make  larger loaves and give them to friends and family.  - Judy

Judy, I image your family will be very pleased with your bread making ;-)

Are these thinly sliced raw potatoes or cooked? I think raisins and potatoes should both ferment well since these are the main ingredients used in the cultivation of wine and vodka :-p

Judy, potato flakes  are what is also sold as instant mashed potato for domestic use. Potato Flour is the same thing in powder form. There is also Potato Starch, which is NOT the same thing. Potato starch is equal to tapioca starch, and much like corn starch.