What is exactly cornflour?

What is exactly cornflour?

Sorry if the question is stupid, but someone wrote me that cornflour is actually corn *starch* rather than a more finely milled corn *meal*.

Can someone disambiguate the term, please? I'm losing my sleep :-)

True, Nico, Corn flour is a highly refined Corn Flour containing only the starch in the endosperm.

True Corn Flour however is named Corn meal due to its gritty consistency.

"Cornflour" as explained by Wikipedia:

In the US, what is called "corn flour" is pretty much exactly that; finely ground corn meal. And of course, we also have corn starch(not pictured) 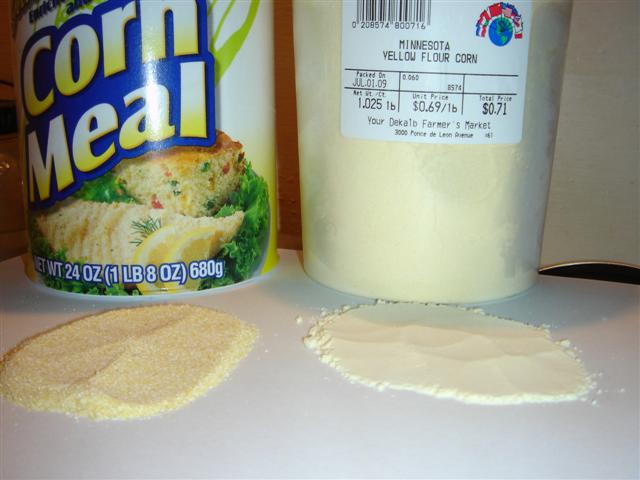 Mine in Austria (they have several names as previously mentioned) the one in my kitchen is called  Mais Stärkemehl  or  Corn starch flour.

Broken down there is no protein, no fat, and all carbohydrate 87g to a 100g.  So it is starch in flour form.

I know corn whole corn contains protein and fat so if the whole is ground into flour, the value information would contain more than just carbohydrates.

This thread reminded me of a very interesting video, demonstrating the ability of ... well watch the video and you'll see. It's fascinating. A demonstration by New Scientist, I believe.

I love mixing cornflour (or 'custard powder' which is mostly cornflour) because if you stir it it's liquid but if you hit it with a spoon it's solid.

Looks as though I didn't put the link in so here's another. It's not in English but it's a lot of fun!

The real deal is this.

Cornmeal is a more coarse grounded product that cornflour. They can both be made from whole corn. Typically corn flour is refined and they only use the endosperm of the corn, to have a better texture. However it is not as healthy as Whole corn flour. Corn four is thinner than conrmeal. Cornflour in my country is used to make arepas.

On the other side, corn starch is something different.

The corn is steeped for 30 to 48 hours, which ferments it slightly. The germ is separated from the endosperm and those two components are ground separately (still soaked). Next the starch is removed from each by washing. The starch is separated from the corn steep liquor, the cereal germ, the fibers and the corn gluten mostly in hydrocyclones and centrifuges, and then dried. (The residue from every stage is used in animal feed and to make corn oil or other applications.) This process is called wet milling. Finally, the starch may be modified for specific purposes. (Wikipedia)

Interesting... I am from Slovenia, Europe. We use corn meal only for the purpose of making polenta which is called zganci here and is an old traditional meal, topped with warm cream, milk or pork greaves. And the corn flour is called edible starch, very rarely used. What I find interesting is that corn flour is used for making the icing sugar, what I until now believed is a medium grinded sugar (something between the regular sugar and powder sugar). But it is actually the same amount of corn flour and castor sugar (castor sugar = superfine sugar, finer than the regular sugar, but 10 times less fine than powder sugar) mixed together.

Community Bake - I have an Idea - Want Input
Should i store starter in a SEALED jar in the...
Bread Pan Size
Granary Rise and Prove not required ?
Do I need to feed more often?
END_OF_DOCUMENT_TOKEN_TO_BE_REPLACED