After two weeks of experimenting with the Steam Maker Bread Baker kit, I can definitely say I noticed improvements in the quality of my crust.

The model I was sent consists of a steam gun and a 4 inch tall lid. 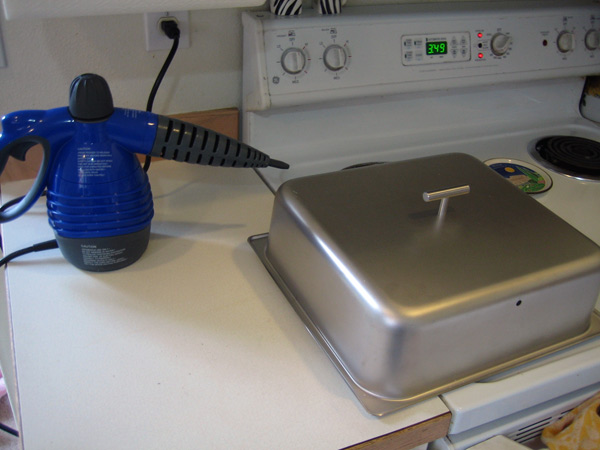 The idea is that you heat your stone, load your bread on to it, then cover the bread with the lid and inject a 5 to 10 second blast of hot steam. After 5 to 10 minutes, you remove the lid and bake the loaves as usual.

I got the smaller of the two units because it fit my existing baking stone. I already find my baking stone to be a bit on the small side. Unfortunately, with the lid on, quite a bit of stone is lost. 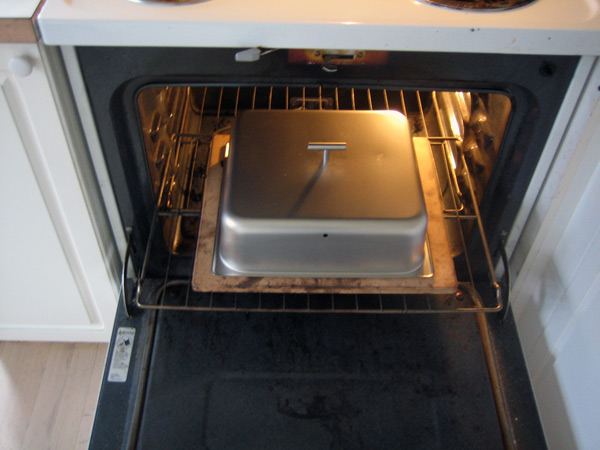 Realize also that you need to leave a half inch to an inch of space from the edges on the inside so that the loaves can expand and you can remove the lid without mashing them and it is quite tight. 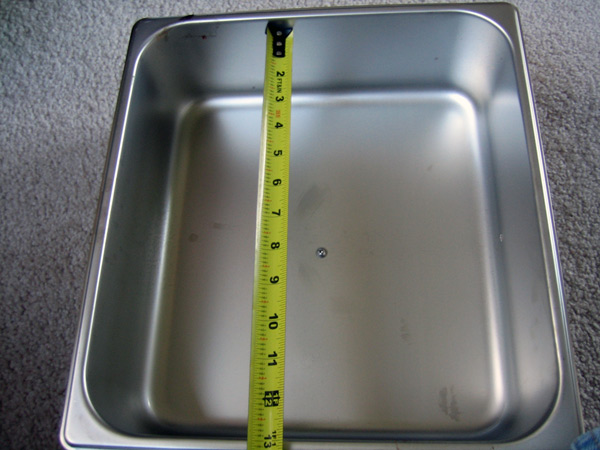 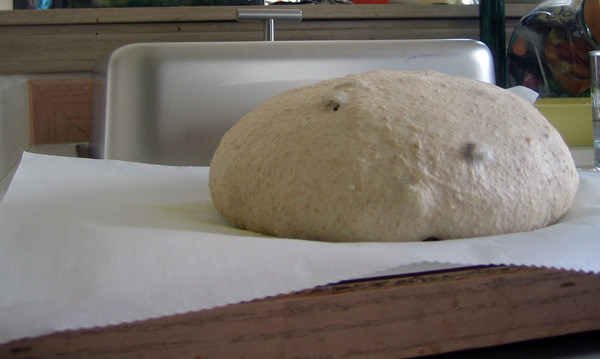 I found myself having to adjust the shape and size of my loaves just to fit under the lid, or only baking one round at a time instead of my usual two. That stinks, and totally threw off my timing and rhythm. I would definitely suggest springing for a larger model if you order one.

The loaves on the left are made with just a spray of steam. Those on the right are made in the Steam Maker Bread Baker. 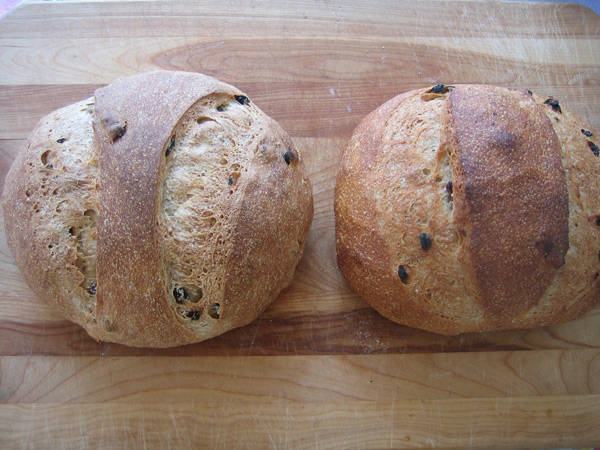 These were a ciabatta I did. 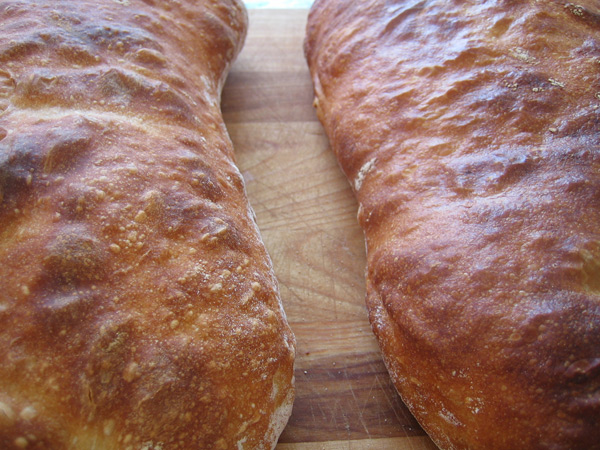 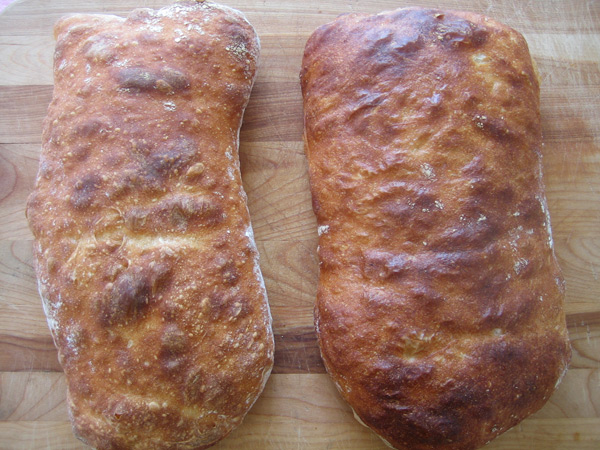 More of the raw flour was absorbed on the steam maker loaf, since it was baked in a moister environment. It also came out with a glossier crust. 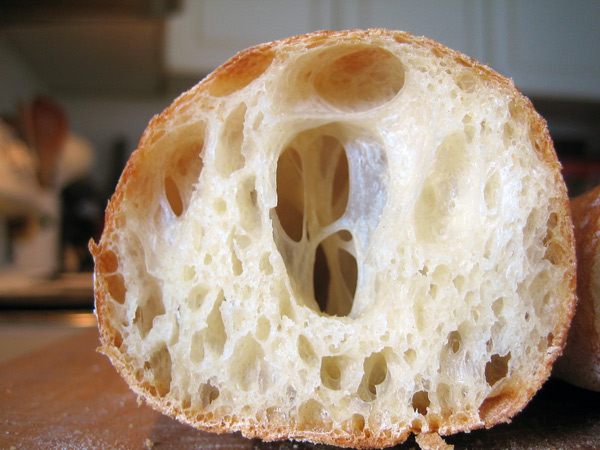 This was a sourdough baguette I did. It is hard to tell, but the crust was definitely thinner and crisper than what I typically end up with. Normal it takes some teeth to tear through my crust. With this one, it crackled easily.

Using the Steam Maker Bread Baker I was able to observe a state in baking I've never seen. When I removed the lid after 6 or 7 minutes, the exterior of my loaves was gelatinous rather than dry, and not at all beginning to brown yet. I don't typically open my oven 6 or 7 minutes into baking, so it is possible that I have been achieving that state and just not known about it, but I doubt it. It appears to me that the steam maker kept my crust moist for a good 4 or 5 minutes longer than what I typically get with my iron skillet on bottom of the oven technique. This results in a thinner, crisper, lighter, more authentic crust.

As has been much discussed here, with ingenuity the home baker can devise other decent ways of creating steam in their oven with extremely inexpensive equipment. And as has also been pointed out, the individual components of the Steam Maker Bread Baker can be assembled independently by someone who wants to put some time and energy into it. Nevertheless, the Steam Maker Bread Baker is a nice kit for someone who wants to dive into artisan baking: as well as the steamer and lid, they include a nice booklet with some basic bread recipes and tips. I could see purchasing one of these for someone who has gotten enthused about baking by trying the no-knead loaf and who is interested in exploring a more versatile solution.

If you already have a steam making solution you are happy with, I say stick with it. But if you don't have a solution, don't find your solution to be good enough, or are afraid your solution is going to short out the circuitry in your oven (as a few of us have), this is a pretty good way to go. 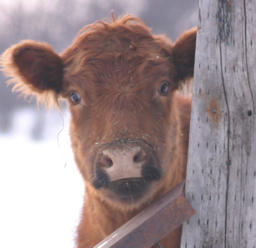 I've shorted my oven twice in the last year.  Always good to learn about alternative methods.  Have you heard much from bakers using used, restaurant-grade ovens?Sylvia

I'm glad you had a positive experience with the steam maker bread baker Floyd. As I have stated here in the past, I really enjoy the end result here in my kitchen. One thing I think that bears mentioning is that using the conventional "toss the hot water on the pan" method is that, instead of rendering 1/2 cup or more of water to steam, the steam generator is only using less than an ounce of water for each 15 second blast. When I first received the kit I tested the total water loss so I would know what to expect as usage, not wanting to run dry. I could barely determine a loss in the reservoir.  The fact that the effect on the dough is so remarkable with such a small quantity of water is telling about the efficiency of the "old" way of steaming and the need for the oven compartment to be small..

I also wish the cover was larger and I'm pretty sure the folks at Steam Baker will address that in the future. I have found however that I can get a 16 inch baguette in if I place it on the diagonal. I guess I would rather have great bread, one at a time, rather than just good twice as fast.

Now if I can just get a whole wheat dough to rise!

Being that I'm in Canada, there's no way I could get the Steam baker at a reasonable cost between brokerage fees, duty and shipping. Otherwise, I would have ordered it.

I found the same steamer for $14.50US on ebay.ca and I bought some Saltillo tiles today. I just need to find a cover big enough, which might turn out to be my biggest challenge.

I can hardly wait.

Until you find EXACTLY what you want, you might consider using an inexpensive stainless steel bowl in as large a size as you can fit in your oven and on your tiles. Drill a hole in the side of the bowl to insert the steamer nozzle. You will probably be limited to boules, but you will be able to see the difference. Best of luck to you!

Susan, that's a great idea. I'll do that in the interim.

You also might try a restaurant supply place or your local Sams Club or Costco or one of those warehouse club places. What you are looking for is a standard cover for a commercial steam pan, they come in lots of sizes and are relatively inexpensive, you could probably find them on EBAY too. I might have to hunt up one of the ones I have here in the house or shed and give it a try too. Mattie

Yeah, I was thinking the same thing--it looks an awful lot like a hotel pan turned upside down.

Quite the ingenious contraption--thanks for the review Floyd.

That's what I was thinking, too. We don't have restaurant supply stores in our area (the one I went to yesterday went out of business) so I'll have to do some searching around on weekends down in the city.

It would be very convenient to just buy the lid. I haven't had any luck so far. I could possibly ask a friend to bring it over the border for me. How long does it take to ship to Chicago?

THE FREE TRADE AGREEMENT ALLOWS ANYTHING PURCHASED AND MADE IN THE US TO BE FREE OF DUTY.  YOU WILL PAY FOR FREIGHT/GST/PST(USDOLLARS CONVERTED TO CANADIAN DOLLARS)...HOPE THIS HELPS CLEAR, ALBERT

True, if it's made in the US, you won't pay duty although there are some exceptions. However, if the item is made in Taiwan and sold in the US, it's not exempt.

But it's the brokerage fees I'm talking about. You have to pay for a broker to handle the item coming across the border. I've been told by numerous US companies that there is no such thing, but then I always get the call from customs to pay a broker before they'll release my items. The broker fees can be really hefty for an individual to pay.

It also depends on the courier. Some couriers will include the cost up front, others will bang on your door and collect the fees before handing over your parcel. I find UPS the worst. I'm never really clear on the rules. It's hit and miss whether it's stopped at the border or delivered through.

Canada post and Fedex seem to have a more streamlined system.  UPS is strange as I used to import US goods with a small business.  The same items and quantities , and I would pay a different price everytime.  They are very frustrating to work with.  You shouldn't be paying brokerage  on small personal items sent directly to you.  Use Fedex or mail (USPS).  I find them hastle free.  Hope this helps

Yes, I've reached the same conclusion. Fed Ex and USPS are the best in my experience, too. I should order more often with those couriers as long as the items aren't too heavy. I think my other experiences had left a bad taste in my mouth.