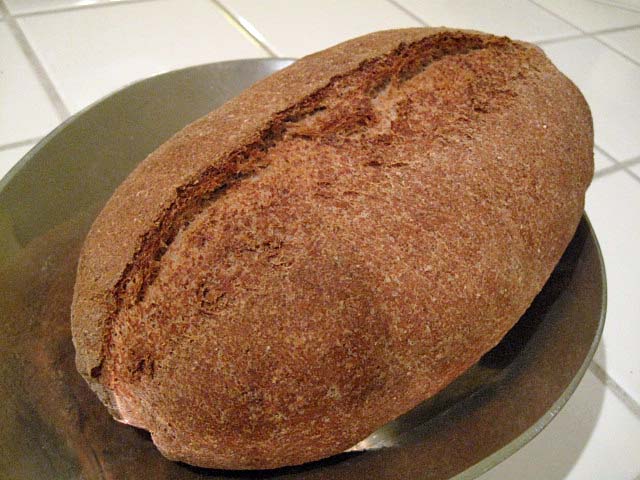 A couple weeks ago, I posted my bake of the Whole Wheat Bread from Reinhart's BBA, made with fresh-milled flour. A reply by Karin (hanseata) prompted me to bake the “100% Whole Wheat Bread” from Reinhart's newer Whole Grain Baking book. I had made this bread once before leavened with sourdough starter and didn't particularly care for the combination of sourdough tang and whole wheat flavor, but I thought I really should make it again using instant yeast and with fresh-milled whole wheat.

The differences between the formulas for whole wheat bread in BBA and WGB are clearly evolutionary and illustrate where Reinhart has gone with his thinking about drawing the best possible flavor and performance from whole grain flours. In the WGB version, essentially all the flour is either in a biga or a soaker, with an optional additional small amount used to adjustment dough consistency, if needed.

I followed the recipe in WGB closely, with these choices where there were options: For the liquid in the soaker, I used about 2/3 Greek-style yoghurt and 1/3 2% milk. For the fat, I used canola oil. I added less than an ounce of additional WW flour during kneading.

After bulk fermentation, I shaped a single bâtard which was proofed on a linen couch then baked in a Le Creuset oval roaster (in which it barely fit). 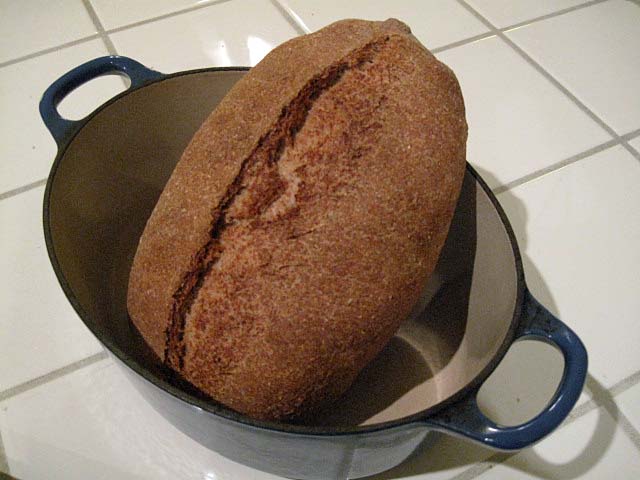 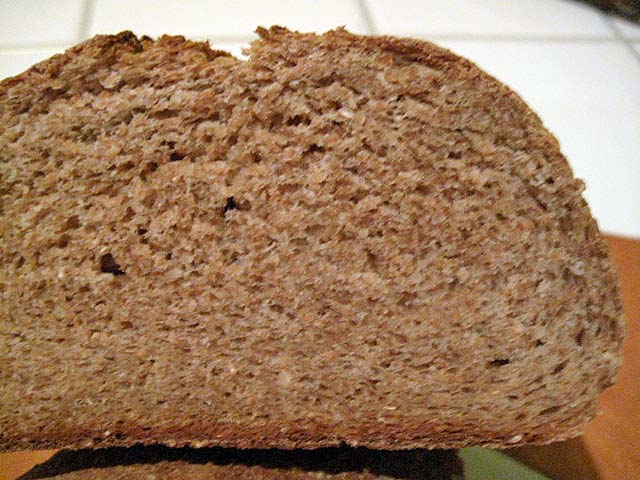 The crust is thin, slightly crunchy and chewy. The texture of the crumb is moist and chewy – hard to describe but very pleasing. The chewiness is from the larger particles of grain, rather than from the gluten in the crumb. The crumb is otherwise quite soft – almost cake-like. I milled the wheat to the second finest setting. Next time, I plan to mill it at the finest setting, at least for the biga. The flavor is very similar to that of the BBA whole wheat bread but even better. There is no grassiness or bitterness from the bran, just a little sweetness from the honey and the wheat itself and good wheaty flavors. I much prefer this yeasted version to the sourdough one.

This bread does not need any spreads or other enhancements. It is very satisfying plain. But I'm anticipating it will be equally delicious with almond butter or with eggs.

I also baked a couple boules of sourdough bread today. I used one of the formulas from the SFBI Artisan II Workshop, which calls for a liquid levain fed twice a day. These were baked in Lodge Combo Cookers. 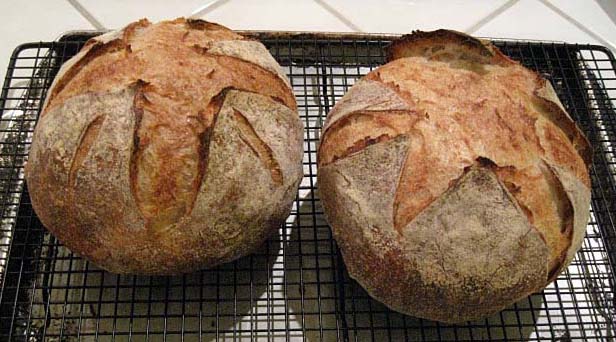 Nice whole wheat loaf, and I love the scoring on your boule's!  I've been thinking of trying a 100% whole wheat bread again, because I love the flavor and texture.  It's been a really long time since I have though, it's a lot more work to get such a good result!

I didn't find this bread much more work to bake than most. It has more ingredients than unenriched breads, of course, and the milling is an extra step. But it's well worth the benefits, I'm totally convinced.

Welcome to the world of fresh flours, David. You'll never look back!

I don't expect to turn back, and I always remember the wise words of the immortal Satchel Paige: "Dont look back. Something might be gaining on you."

David, and an interesting touch to bake it in the oval roasting pan.  Do you think that pan gave you results comparable to the ComboCooker?  While I have not seen them side by side, I've picked up and drooled over the La Cruset pans many times, and they don't seem to be quite so heavy as my cast iron DOs.

Now that you are pursuing the home milled flour, have you given any thought to revisiting Gerard Rubaud's flour formula and starter for Pain au Levain?  I was just re-reading your original blog post (I've been revisiting M. Rubaud myself) where you mentioned using store-bought flour because you did not have your own mill.  No longer the case...

Kudos on the sourdough boules too.  They are gorgeous.
OldWoodenSpoon

I don't have enough experience baking in enameled cast iron to compare it to unenameled. In another topic, Eric offered the opinion that the enamel conducts heat differently and does not work as well if not pre-heated. I pre-heated the roaster for this bake.

And, yes, I do expect to revisit Rubaud's formula with fresh-milled flours.

I used a hand crank flour mill for a while a few years back, just way to much work for a little bit of flour!  I have been thinking about getting an electric mill, just haven't decided on which one and after how spoiled I was for Christmas I am thinking I will need to wait a while before buying one!  Luckily my local store carry's several decent brands of whole wheat flour, and even a few of the different King Arthur's flours, so I'm not suffering all that much!

Which mill do you use and how do you like it?

I have the grain mill attachment for my KitchenAid mixer, and I like it. It doesn't handle the volume of larger mills, but it does grind coarser than most, I believe. That's the main reason I chose it - for rye chops, etc.

Great looking breads.  Are you ready to try to mill and sift your own Type 85 flour?

Are you ready to try to mill and sift your own Type 85 flour?

Your breads look wonderful, inside and out!

Since you started doing your own milling and seeing the results you've achieved, you've definately got me thinking of going the same route myself. The milled to order RF flour I've been using lately has also had a large influence on this as well, not only from the nutritional standpoint but for the fact it's essentially the same type of flour our ancestors would have used to make their breads.

Don't know if you've seen this post on home tempering posted by ZD back in March of last year but thought I'd pass it on to you to have a look at in case you missed it. It might have some useful information for your future milling.

Thanks especially for the link. I'm trying to resist getting into bolting ... It's a struggle.

Nice crumb and shaping!  Baking in the pot it came out very nice.  I've only baked 100% wholegrain ww in a loaf pan.

I'd only made one WW hearth loaf before, and that was with the WGB formula using levain. I'm pleased with how this loaf came out. It slices nicely and did taste very good with almond butter and apricot preserves for breakfast.

My wife pronounced it "wonderful," so it's likely to get made more often.

Do you ever thinking to combine sourdough and poolish in your 100% ww breads in the future (eg Noah elber's maple-oatmeal breads recipe). You gave me so much inspiration about making 100% fresh-milled breads at home. I'm going to bake my breads this evening, let's see I have time to post the picture tomorrow.

I haven't baked from Bread yet and am still trying to find myself. I want the best tasting and healthiest. And realize you can't have both. But am curious where you landed or if you have settled at all.