Today, we mixed and baked ciabattas and challah, neither of them sourdough. We mixed and shaped olive bread, walnut raisin bread and miche to be retarded tonight and baked tomorrow. We also scaled ingredients and mixed pre-ferments for baguettes to make tomorrow. The baguettes will be made with two pre-ferments – a pâte fermentée and a liquid levain. The doughs for the ciabatta and for the miche were hand mixes, and all the levains were mixed by hand. 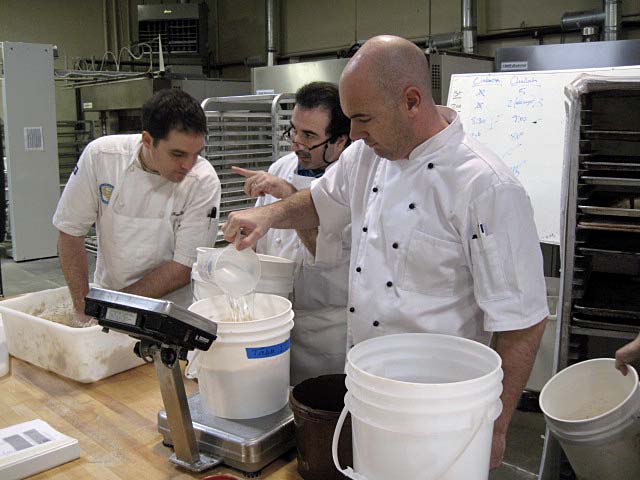 Scaling water for the miche mix 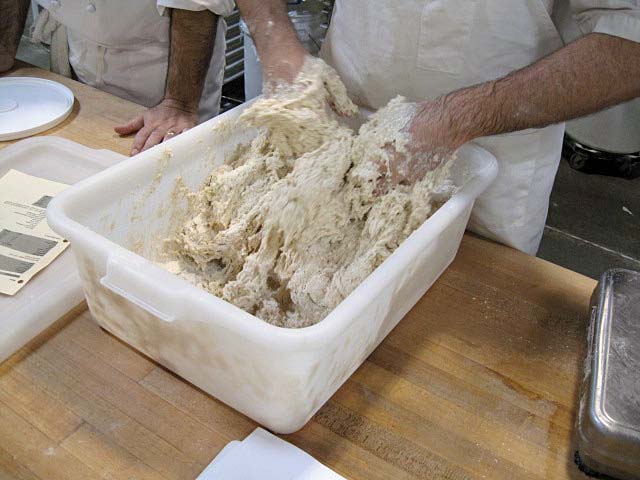 Hand mixing dough for the miches

Frank had us make 6-strand challah but he also demonstrated a variety of other braids. His challot are pictures of perfection. (Mine are pictures of squid who ate some special mushrooms.) 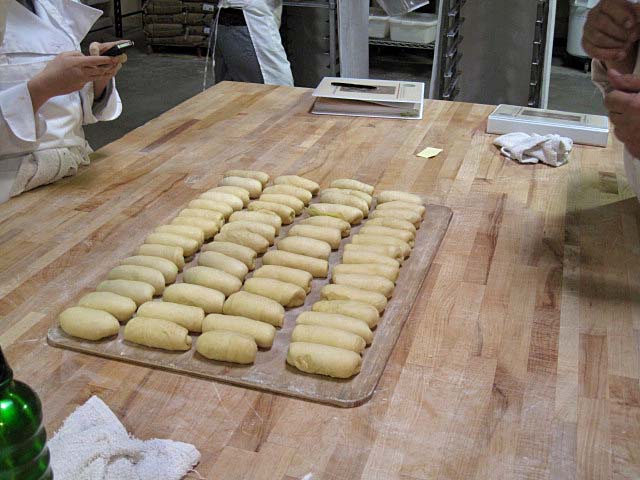 Challah pieces ready to be rolled into strands fro braiding 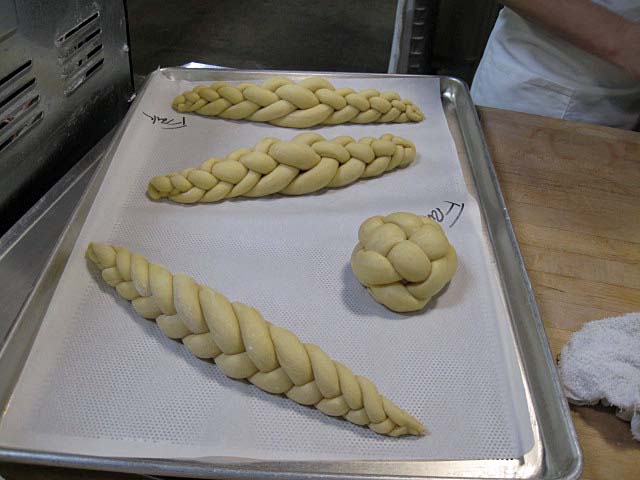 Frank's challot, ready to be egg washed prior to proofing 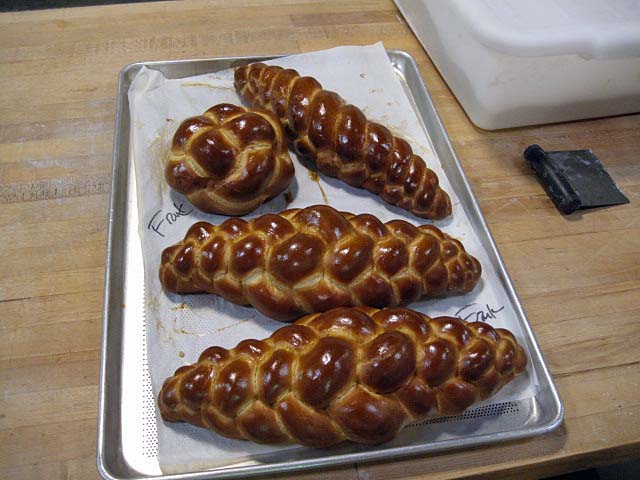 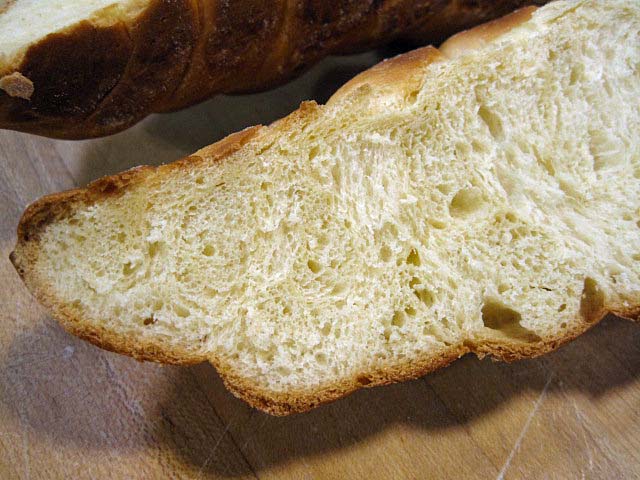 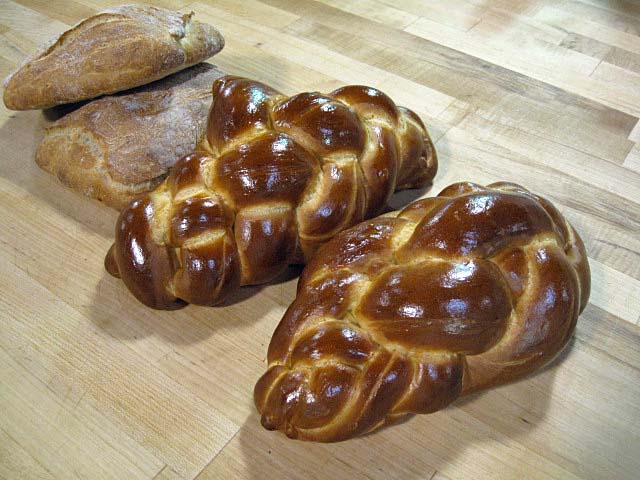 My Ciabattas and Challot 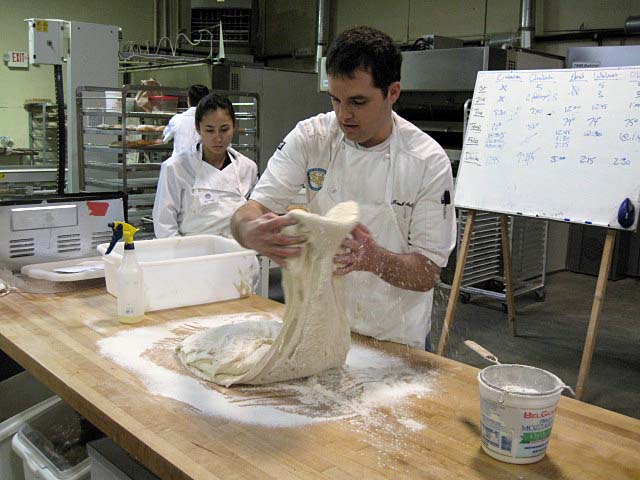 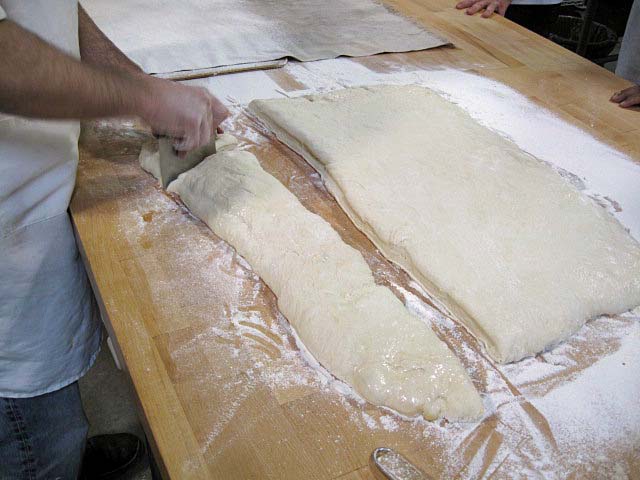 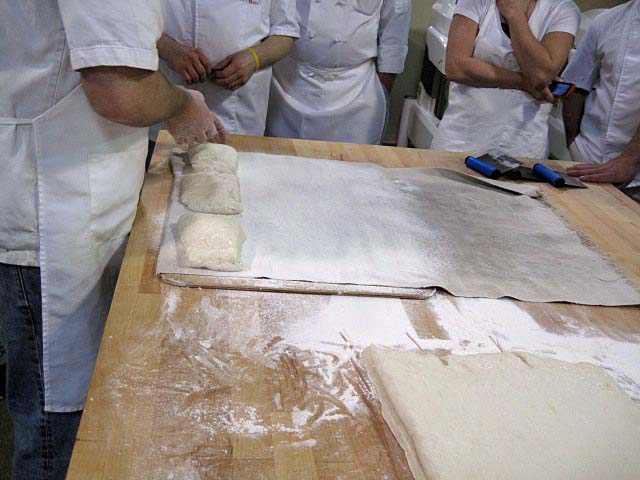 Placing ciabatta on the proofing board 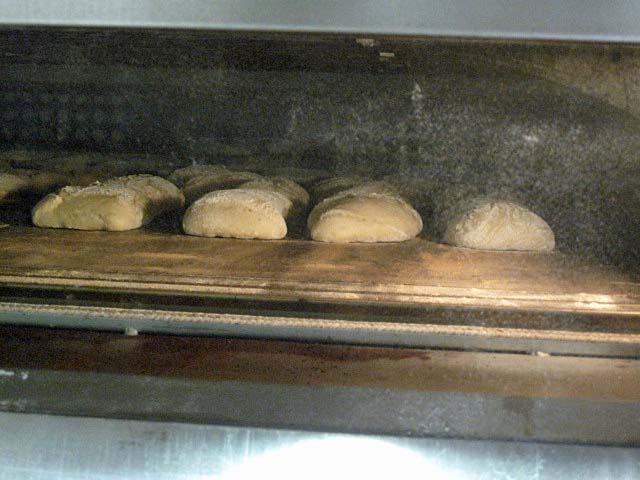 Ciabatta baking in the deck oven 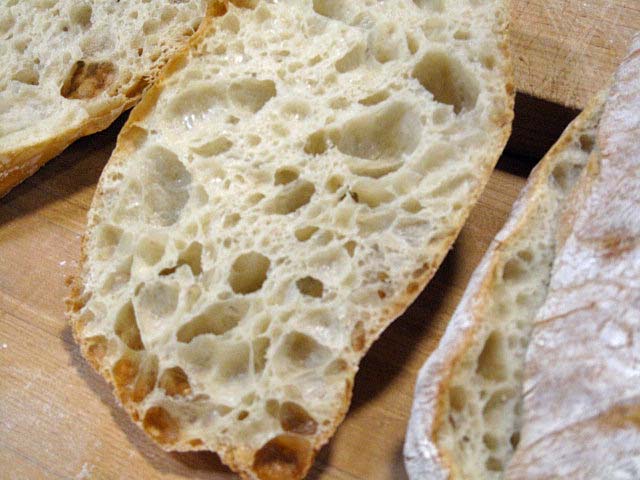 Both the ciabatta and the challah are delicious. I'm looking forward to the breads we are baking tomorrow.

We spent all day in the bakery and only were in the classroom to list our tasks for the day, first thing in the morning. Most of Frank's teaching dealt with dough handling issues, but I picked up a couple pearls worth sharing.

I asked him about how levain is calculated differently from other pre-ferments. (See my blog entry for Artisan II-Day 3.) Here's the answer: It's a matter of convention. Levain and other pre-ferments can be calculated either as a percent of dry flour weight in the final dough or in terms of the percent of pre-fermented flour in the total dough. No big deal. Your choice.

Frank also made two interesting comments as we were scaling and shaping the miches. The first was that long loaves like bâtards have a more open crumb structure than boules made with the same dough. I have found that to be true but attributed it to my shaping skills. The second was that the size of the loaf has a significant impact on flavor. I had also observed this with the miche from BBA which I made once as two 1.5 lb boules, which had a different flavor from the 3 lb miches I usually make. Again, I didn't generalize from that one experience at the time. Interesting, eh?

I am anxious to get home and practice some of the skills I've acquired before I lose them.

...are very nice sauteed with garlic and served with Challah toast, I bet.

Thanks again for the reports.  I look forward to hearing more and tasting the results.

and the pictures are worth a 1000 words. I particulary like the ciabatta crumb. I've never been a fan of holey-er-than-thou caibattas and baguettes. There's no flavor in holes;-)

Wonderful post, I very much appreciate what you are doing!  Thanks for sharing and looking forward to your next post!

Thanks from me, too, for all this info...and be careful of the chalot.  There might be some mushrooms left in the squid....!

Can't thank you enough for recording and photographing this wonderful SFBI experience.  I like your challot very much--the higher loaves are nicer than the low-slung ones that seem to be so fashionable these days (I even like pan loaves); they make killer French toast, too!  And--the Winston knot really is gorgeous, worth learning (good directions in Hamelman's Bread) and great for a round holiday loaf.

I learned a lot:  Especially good knowing that the once-a-day feeding of starter before making the levain creates a more sour taste (re. acid development).  It makes sense, but it took your explanation to make me understand it more fully.  I've wanted to get a bit more of a tang and now I think I know how.

I want to get a bread-baking group started in early February for get-togethers here in the Santa Rosa area; got a few interested folks; we'll meet monthly or every other month.  Any local folks out there interested?

Even with the little extra appendage ;o)  I don't like the long tapered ones, either because the texture of the tapered ends is not as nice as the middle.

Nowadays I make almost all my challot in the shape of that Windsor knot.  It's fun to braid these and it seems magical when it turns into an almost perfect soccer ball shape.  And it yields a nice, even loaf with good texture throughout.  Plus, it looks great.

I make the big six braid challot for the bar and bat mitzvahs of close friends, but I compact them a bit so there are no skinny little ends.

Glad you're having a good time in the class.  It looks like you are learning a lot and I thank you for sharing it with us.

I had Frank as my instructor for the baguette class too. Looks like you are learning and doing a ton of stuff. I am super jealous!

Yet more thanks for your generosity in sharing all this information with us.

And a follow-up question: How does the size of the loaf impact flavor?

The impact of dough mass on fermentation was a recurring theme. Frank said that dough masses weighing over about 3 lbs (15 kg) continue to ferment (and therefore change flavor) while smaller dough masses do not nearly as much. That's why bulk fermentation is where flavor develops with little further enhancement in flavor after loaves have been formed. The exception is when the shaped loaves themselves weigh over 3 lbs.

My sense is that the difference is quantitative, not qualitative, but the delta flavor, if you will, does not vary with dough mass in a linear fashion.

We've been talking a little on this topic in your absence---the temperature part anyway, not the flavor aspects. Larger masses hold their heat better than smaller ones, so dough will lose heat more quickly while retarding after dividing and shaping, than it will in bulk. As temperatures drop, the Activity rate of flavor-producing lactic acid bacteria decreases more sharply than that of yeast. The faster cooling of the shaped loaves, I think, exaggerates that disparity.

I think your challot are rather cute, David.

I doubt very much if you'll lose any of your new skills on the drive home!  Ha!

I do think your challots have a lot of personality!

I would love to be able to take one of those classes one day...   Thanks for such a detailed post about it...

Is it the egg wash that creates such a shine to the loaves or is something else added as well? I've used egg wash before & it had a nice color but never has been that shiny.

Thanks for sharing with us & have a safe trip back home.

The egg wash was beaten eggs with a little salt. (BTW, the purpose of the salt is to partly denature the albumen in the egg white, which improves the homogenous mixing of the white and yolk.)

The eggs that SFBI uses have extraordinary yellow yolks. That's the only source of the shine. Some challah recipes call for egg washing after shaping and again just before baking. We just did the one egg wash after shaping.

What a delightful week! Do you find Artisan 2 was more of an educaitonal experience than Artisan 1 or is it different enough that they are hard to compare!

Thanks for sharing! I can't wait for August and my turn at Artisan I.

David, you remarked that the bulk fermentation stage is where most of the flavor development takes place.  I have recently realized that Hamelman, in Bread, instructs the reader when to retard dough in each recipe that admits the overnight fermentation.  Some of them are to be retarded at the bulk fermentation stage, some of them after shaping of the loaves.  I know this topic has come up repeatedly, with differing opinions.  But, per your comment, it seems that retarding at the bulk stage makes the most sense.  Before I realized what Hamelman was instructing us, I have previously retarded after the obligatory stretch and folds, leaving the dough mass overnight, then shaping and baking the next morning.  I didn't wait for the dough to come to room temp but rather just give it a little time to take some of the chill out before preshaping, shaping and baking.

Would appreciate your opinion.

Frank told us that bulk retardation is best for high-hydration dough. Retardation of formed loaves works well for sourdough breads. Retardation and proofing is most suited to viennoiserie.

When retarding most doughs or loaves, it is best to let them ferment for about an hour prior to retardation.

Smaller loaves (1-1.5 lbs) can be baked right out of the cooler. Larger loaves should be allowed to warm up for an hour or more prior to baking.

I don't have personal opinions on the subject, but that's what I understood Frank to recommend.

...well done in your exemplary manner. Thank you for taking the time to share all of this experience with us. It has occured to me while looking at your photography that "eye candy" has a completely different connotation for us bakers!

I'm glad to hear you & Susan made it home ahead of the rain. Lane & I went out erranding last night only to discover the downtown area of Bakersfield seriously under water and it still has not stopped raining.

Your explanation couldn't be clearer (except for "viennoiserie" which I take to mean pastry in the European style).  I'll certainly keep these guidelines in mind.

Hamelman sometimes specifies that certain formulas don't lend themselves to retarding (one using high-extraction flour), I think his point being that would obscure their flavor. Specifically, that comment referred to the Miche, Pointe-a-Calliere and the Mixed-Flour Miche.  If you have insight into that, I'd appreciate it.

At any rate, thanks for the reply!

I have the highest respect for Hamelman and take his recommendations seriously, always. I do wish he gave more of the reasons for what he recommends, for the benefit of us mortals.

Also, remember that Hamelman is talking to professional bakers, so "cold retardation" means 50ºF in a retarder, not 40ºF in a home refrigerator. The increased enzyme activity and continued fermentation (especially the former) might lead to more sour than ideal and some degradation of dough structure due to proteolysis.

These effects would all be decreased at lower temperatures, so we might retard these breads at home with less risk than in the bakery.