The Artisan II Workshop at The San Francisco Baking Institute is all about sourdough bread. The first day of the SFBI Artisan II workshop is spent mostly in the classroom. The instructor reviewed the content of the Artisan I workshop and then introduced basic concepts of sourdough baking with emphasis on starter elaboration and maintenance. At the end of the first day, there is a quick review of baker's math.

In the bakery, we started elaborating a new sourdough culture with which we will be making bread on Friday. We also scaled the dry ingredients and mixed the levains for 4 different breads we will be making on Day 2

Our instructor for Artisan II is Frank Sally. My classmates are a different mix from that of the Artisan I workshop I attended in August. This group is almost entirely professional bakers who have come from Australia, New Zealand and New Jersey, among other exotic places. 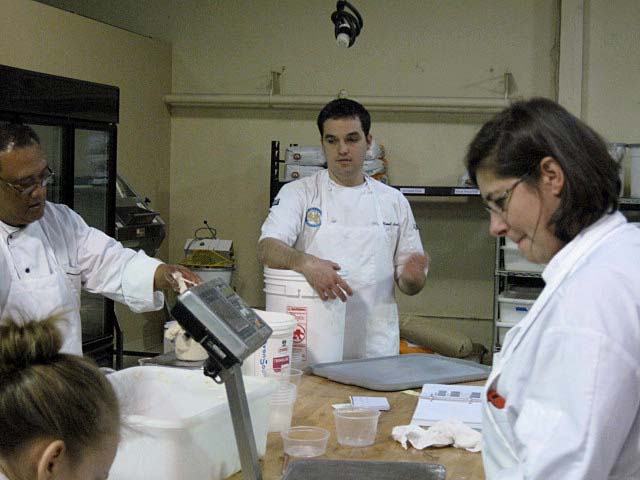 Frank (in the center) and some of my classmates 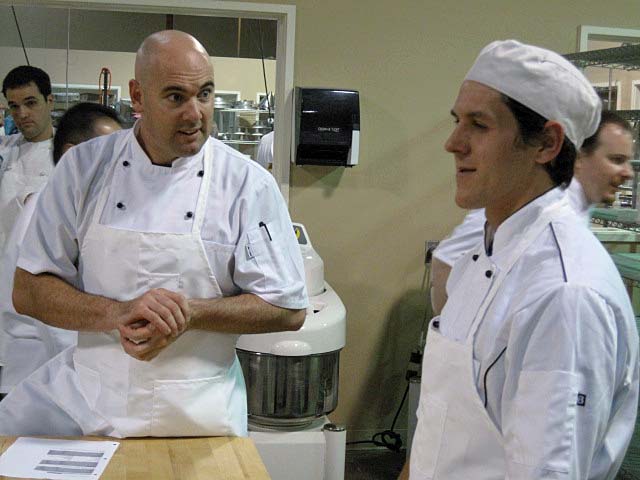 A couple of my bench mates, both professional bakers from Australia (on the left) and New Zealand (on the right) 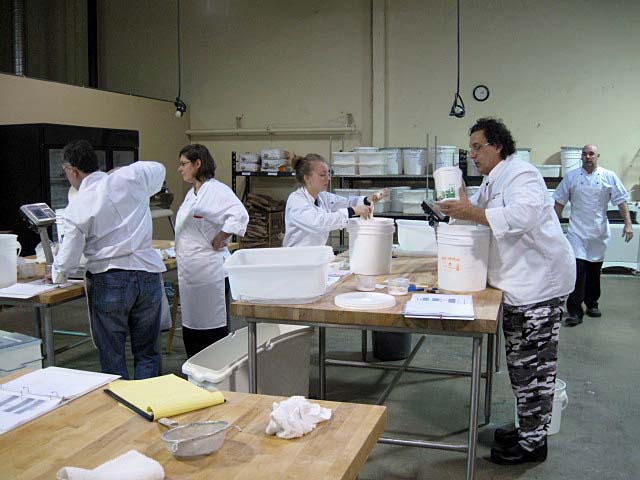 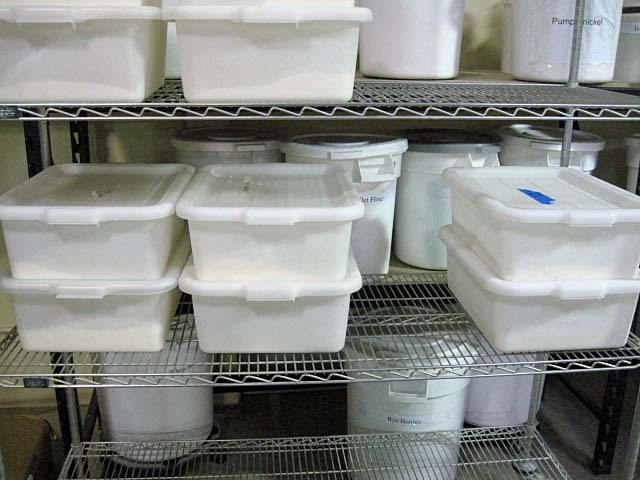 Much of the material presented today was familiar, but Frank touched on a few concepts which, while not completely new to me, I'd never thought much about.

He spoke of the “mass effect,” which occurs during bulk fermentation. He could not tell us the mechanism, but said that there is improved flavor development when the dough weighs more than 2 kg. Most of us home bakers generally work with batches of dough smaller than this most of the time. Evidently, we are missing out on some flavor enhancements by doing so.

Frank described the differing rates of growth of homofermentative and heterofermentative bacteria during sourdough elaboration. The former develop earlier. Moreover, it takes longer for the acetic characteristics to develop in the starter due to the greater volatility of acetic acid compared to lactic acid. This is a factor in the well-known improvement in flavor complexity as a new starter is fed over the first weeks. It takes about 3 weeks for a good stable balance of yeast and the various lactobacilli to develop

The first set of breads we will be baking will provide comparisons between 1) once a day versus twice a day levain feedings, 2) liquid versus firm starters and 3) breads made with different proportions of starter (relative to the amount of dry flour in the final dough).

Sounds like an exciting week David, and I look forward to your insights.  I am intrigued by the comments about mass effect.  I will be cutting into a loaf of sourdough tomorrow that is unremarkable, except that it comes from a large (in my terms anyway) batch of dough; my first ever batch of 3 Kg of dough at one time.  I shall have to pay special attention to see if my taste buds can detect any difference.

Thanks for sharing with all of us.
OldWoodenSpoon

Examined carefully it is not surprising that larger dough masses might develop more flavor. The logical basis for the change would be the lower surface to volume ratio for larger masses. (From a technical perspective for a given shape the surface area grows as a function of the square of the diameter or length while the volume grows with the cube of the diameter/length. As mass is for a given density proportionate to volume, this translates to the surface area growing more slowly than mass. A dough ball of a given mass would have about 1/2 the surface area of the same dough formed in two balls.

Lower surface to volume ratios offer several advantages that could be beneficial to bakers (and several that clearly are not). I strongly suspect the biggest advantage us that higher mass effectively insulates more dough from external influences such as thermal changes, air humidity, and (almost certainly most significant) migration of flavor chemicals to the surface where they can evaporate into the air. This latter effect would suggest more alcohols and flavor compounds would accumulate during the bulk ferment. A dough ball of twice the mass should lose only about half as many flavor compounds as the same dough in two smaller balls. As a result the larger dough ball should finish bulk fermentation with more flavor compounds than smaller dough balls. I suspect some of that benefit is lost in the forming and proofing of the loaves but it seems likely that a loaf that began with more flavor would end with more flavor.

There is a potential downside though in dough that is retarded in the bulk ferment in that the extra insulation would allow the interior to continue fermenting longer and faster than smaller balls. However, that effect is relatively minor compared to the surface/volume effect.

The suggestion that mass above 2 kg is important is interesting to contemplate for my normal batch of dough is 2.5 kg. I have long felt that smaller batches (and particularly 500 gram batches/single loaves) were rarely up to my "norm". Without a direct comparison they weren't inferior enough to strike a definite chord - just enough to keep me making bigger batches whenever practical.

I've been looking forward to your play by play of ArtII David. Thanks for going into detail once again and being generous enough to share with us all here!

I too have looked forward to sharing your week at SFBI, thank you for your generosity, it feels like an early Christmas gift.

Please say gidday to your Kiwi classmate(s) for me and let them know we are watching over your shoulder.

I also look forward to the answers to the questions you mention. A great experience indeed.

David,  we will be following your notes and living the lessons vicariously this week.  I am writing this from the airport in chilly Boston about to board a flight through Miami to San Juan for a few weeks.  I am bringing my sourdough starters, bags of bread flour and rye flour and a handmade peel (in the bottom of the suitcase).  I hope to do some white and rye sourdough for friends, as well as pizzas and other goodies, and temporarily escape the cold.  Cheers.

All that new lingo!

Glad to hear they don't have a "don't ask, don't tell" policy.

Thanks for the report.

This is great stuff David! I really enjoyed the last series on your SFBI experience and I'm sure this one will be every bit as informative. Many thanks for sharing it with all of us!

Enjoyed your reports of the first workshop and looking forward to this lot. Especially interested in your feedback on the 3 comparisons listed at the end of your post - these are aspects of SD bread I have often wondered about, without actively investigating.

have so many question when you get back.

I think it's really terrific of you to take the time to share your insights and experiences after a long day - reading your SFBI blog is a great way to start my day!

BTW, cool cammies on your classmate.

Very exciting.  I'm looking forward to reading more.  And I hope you have a great time!

What a great experience and thank you for taking the time to share.  Looking forward to reading more and seeing your photos.  Wishing you a wonderful time!