On day 3 of the Aritisan I Workshop at SFBI, the didactic sessions covered "flour technology" with discussion of the different kinds of wheat, milling and other processes used by millers. In the lab, we again mixed 3 kinds of baguettes in order to compare the consequences of modifying the straight dough method by using high gluten four or by using an autolyse. In each case, while the formula was kept constant, mixing was varied as one would with these variations - longer mixing when using high-gluten flour and much shorter mixing when using an autolyse. 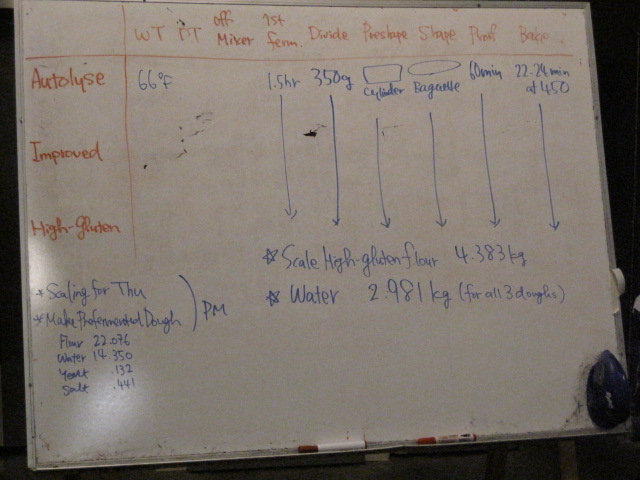 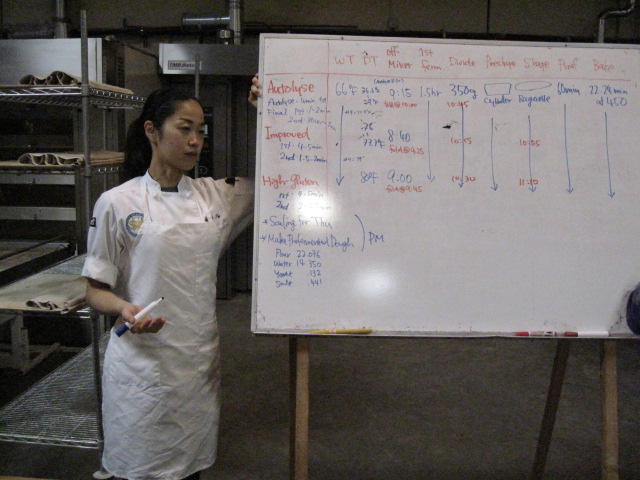 On Days 1 and 2, Miyuki did all the mixing. Today, we all got to use the big spiral mixers with much more (literally) hands on dough-feeling periodically to judge when the dough was adequately mixed. 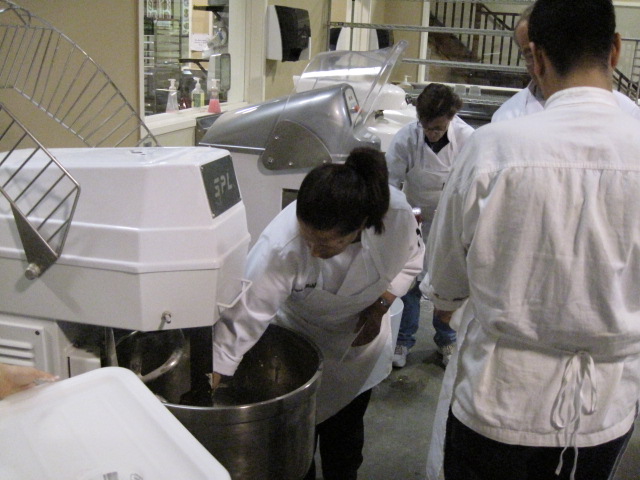 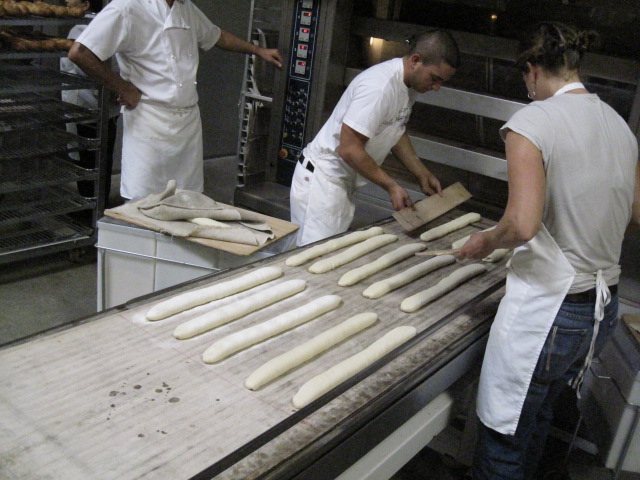 Transferring proofed baguettes to the loader 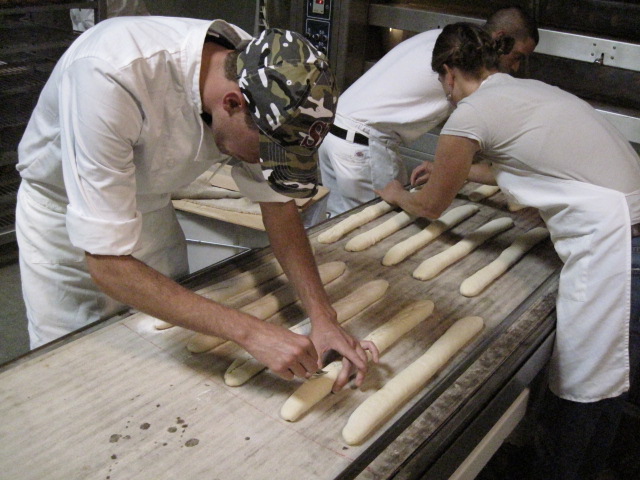 Just to clarify: When different methods were used, I made 5 baguettes with each dough, even though my photos only show (the best) 3 of each batch.

We were able to actually experience the different dough handling of each mix when stretch and folding, dividing, pre-shaping, shaping, scoring, etc. We could also see the consequences of these variations for loaf volume, crust color, cuts opening, crumb structure and color, aroma and flavor. Miyuki repeatedly quizzed us on the reasons we got the results we did for each of these variables. 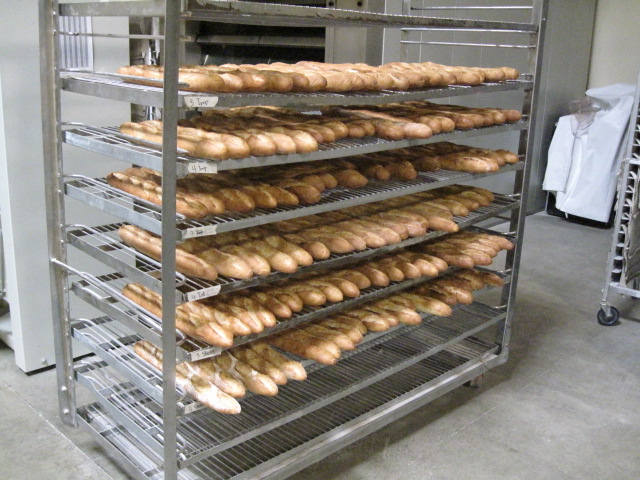 Our baguettes from today, cooling 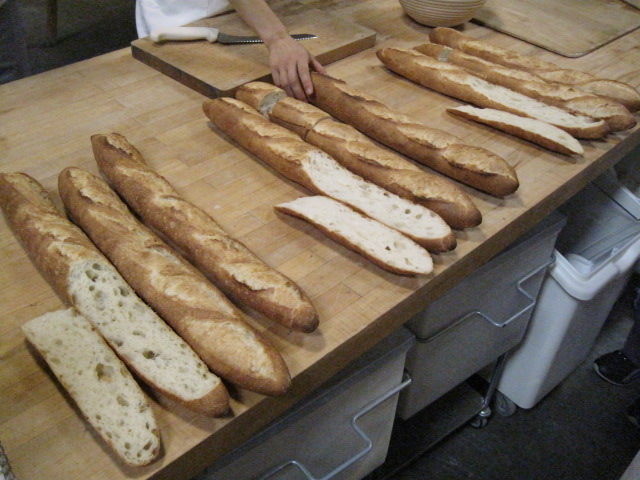 Of course, we also worked on improving our dough handling skills. I felt pretty good about my improvements in consistent baguette shaping. My scoring was, overall, improved. My best scoring was, in Miyuki's words, "almost good."  But I think I know what I need to do to improve my scoring. 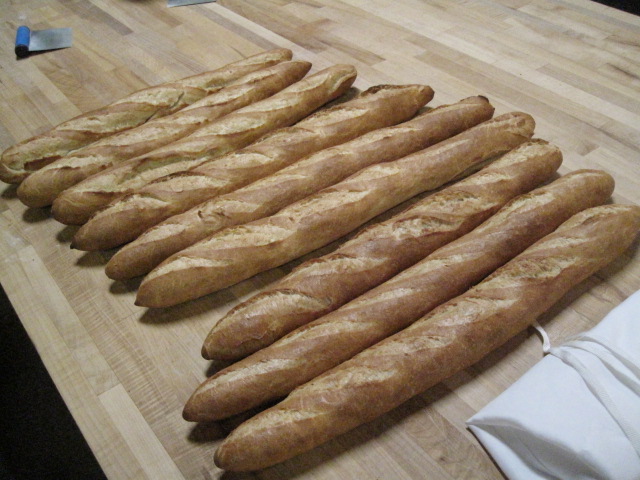 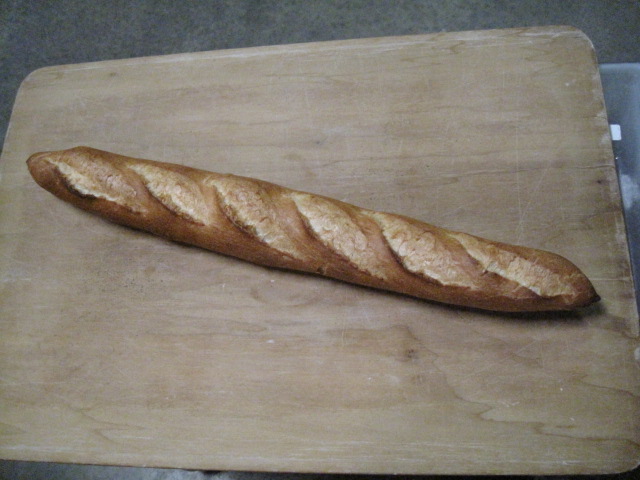 My best-looking baguette of the day. 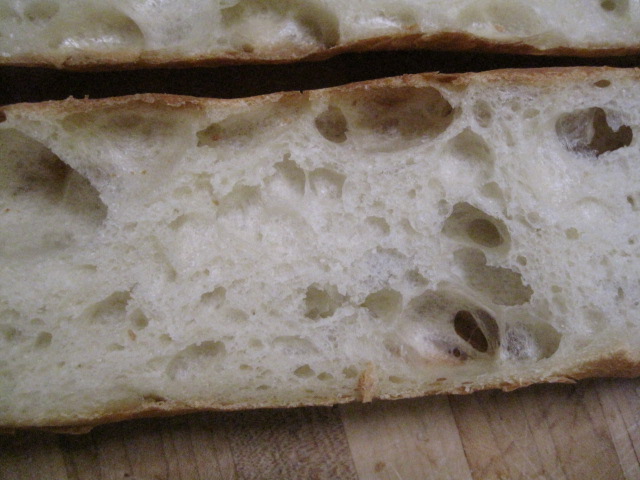 Tomorrow, we make 5 kinds of bread, none of which is baguettes! 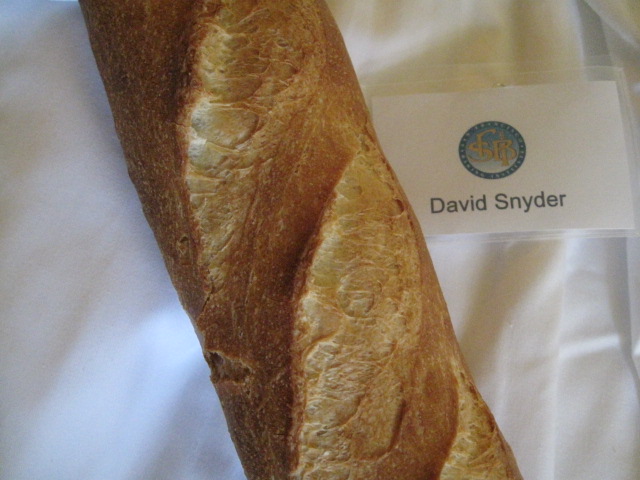 I agree with Miyuki...hahahahaha..they look beautiful to me!!! Did you have an Aha ! moment during baguette 101 that sticks out in you mind? Something that pulled it all together for you?

It sure sounds pretty intense, David.  A program definitely not for the faint of heart.

Almost good, eh.  While the SFBI standards are clearly quite high, your best baguette of the day looks pretty darn impressive.

Your best scored baguette of the day looks very good indeed.  If I'm reading the board correctly, these are about 68% hydration doughs?  I'm curious as to the crumb and crust of the high gluten flour baguettes -especially the crust.  How does it compare to those made with standard AP flour?  Also, of the 3 mixes, which gave you the best overall results?

Thanks again for detailing this adventure.

It is very beautiful!  I wish I were there to take a look at it in my eyes.

I am scoring with a lame without a stick now.  I think that people who is scoring on the picture held the lame by bare hand too.  It is difficult to get the right angle that I want to achieve when I use a stick.

Thanks again for your report.   I am really enjoying to see your posts.

Thanks everyone for your comments, questions and kind words. I'm glad you are enjoying my "journal." I'll try to answer some of the questions that have been asked.

Regarding the various comparisons:

What is clear is that the short mix yields better flavor and a more open crumb. I had the impression that one could not "over-mix" in a planetary mixer like a KitchenAid. Not true! My first "Aha!" moment was feeling the dough at the end of a short mix. I realized that I have been over-developing the gluten quite often - even with hand mixing at times. The take away lesson is to depend on a long fermentation and stretch and folds to develop gluten.

Mixing oxidizes carotinoids that give flour/dough a yellow cast and are important for a lot of the flavor of unenriched white bread. One of the values of autolyse is to allow you to further decrease mixing time. One of the detrimental effects of using high-gluten flour is that it requires longer mixing. The baguettes made with high-gluten flour had nearly tasteless crumb. (We were taught to taste the crumb alone first, then the crust.

The baguettes made with high-gluten flour, besides having little flavor in the crumb, had more flavor in the crust. This is because the higher protein content results in a more extensive maillard effect. The crust is thicker and less crisp. We all know that higher gluten flour absorbs more water. We see this in the dough consistency when mixing. This increased water contributes to a thicker crust but one that gets soft faster.

Because the dough is stronger, the air cells can expand more, so baguettes made with high-gluten flour expand more and also have a rounder cross section. However, because it requires longer mixing, the gluten is "more organized" - the strands are more like woven fabric. The cells are smaller. The crumb is less open - the holes are more uniform in size.

Note: What Miyuki called "high-glutin" flour was what we would buy as "bread flour." She prefers AP flour, which she calls "bread flour" for all breads, even those that often call for bread flour or high-gluten flour.

Another "Aha!" moment regarded dough handling and shaping baguettes of uniform thickness and proper length. I was frequently reminded of something Pat (proth5) has repeatedly said, quoting "(her) teacher:"Everything must be perfect." To make a perfect baguette, you must divide the dough into rectangles. You must divide the dough to be the correct weight without having to add lots of additional little pieces of dough. (They interfere with uniform crumb structure.) You must degas to just the right degree. Too little, and you get huge air bubbles that can even deform the loaf during proofing and oven spring. Too much and your crumb will not be adequately aerated. In degassing, you should pat the dough so as to avoid elongating it, which would lead to too long a baguette during final shaping. The pre-shaped pieces should be rectangles about 8 inches by 5 inches to get the right final shape. I can't put into adequate verbiage the "iron hand in a velvet glove" approach to shaping, but I had a deep understanding as never before the very first time I saw Miyuki shape a baguette. I hadn't gotten this even watching dozens of videos, including videos of Prof. Calvel. I could go on and on. I probably have learned at least a dozen "parameters of perfection," and each and every one must be ... well, perfect.

One of the most impressive qualities of Miyuki's teaching is her ability to titrate information to optimize the student's growth. She never gave too much detail at once but, once one level of skill was achieved, she added new tips that took us to "the next level."

Whew! I better get to bed. Tomorrow we're making whole wheat bread, multi-grain bread, rye bread, white pan bread and challah - all with pâte fermentée and the multi-grain with a soaker also.

Thanks so much for posting these daily updates. Is King Arthur all purpose flour too strong to be considered an AP and used in a baguette?

Thanks for passing along so much info on a daily basis.  I'm still skeptical about the capacity of stand mixers to actually overmix - as in an intensive mix that destroys all carotinoids.  Certainly a stand mixer will go way beyond what a short mix accomplishes, but in my experience a short mix produces very little noticeable gluten development.  Dough is shaggy and tears quite easily.  The so-called 'improved' mix yields very discernable gluten development, although you can only pull a partial windowpane (which is what Hamelman counsels we should actually be aiming for).  But with the exception of brioche and like mixes (pannetone) where I actually run my poor Hamilton Beach for nearly 40 minutes, I have never been able to accomplish a full windowpane (which is one characteristic of intensive mixing) in a 8 - 10 minute mix.  As you indicate, the short mix will certainly provide the most open crumb.  Now that I've worked in commercial bakeries, however, I see the practical requirements of an improved mix in that setting (even combined with autolyse if that's practical, which it often isn't).  But having seen as you have, the completely white and flavorless outcome of an intensive mix, it's something I avoid ever going near in commercial mixers, but also something I don't worry about at all when using my stand mixer.

(I assume you are having the time of your life).

This lil tour you are giving us David is fascinating, thank you. I look forward to Day 4 and seeing the results of those wonderful skills in whole grain breads!

Best of luck and continue on with the fun!

What an amazing class you're taking & it's clear you're enjoying the whole experience.

I am curious for you to ask Miyuki what her recommendation would be for the best mixer for the home baker . Obviously most of us don't have the room for the large commercial one's you're using, but her evaluation of which would take on the rigors of artisan dough mixing.

Thank you for the "virtual" class experience. Your pictures are great! Have fun today & I'm looking forward to your next installment.

While videos are often a big improvement over verbal descriptions, there are little details in live and hands-on experiences, like yours, that are elusive or missing in transmitted descriptions. Such as the texture of the doughs, the subtleties of shaping, slashing, and such. A video may get you close but...live is, I think, necessary for fine-tuning!

Your narratives and descriptions are wonderful though and a great inspiration for those of us looking over your shoulder! Thanks for sharing!

is in making that same old dough with minor variations- over and over.  Sounds like a class after my own heart (similar to the course I pursued in a somewhat different setting...)

But who cares?  You got to play with the big spiral mixers!!!  Whooo-peee!

I can't wait to be back to baking and to have my own mini spiral!

Hope the rest of the class is more fun than you can handle!

We mixed 5 doughs today plus 4 pre-ferments for tomorrow (if I counted correctly. My brain is fried and my body is tingling all over, at the moment.)

However, we did get to play with the loaders today, electively.

Thanks so much for telling of your experiences and knowing how much those of us on TFL would drool over them.  As others have pointed out already, you have a gift not only for baking, but for storytelling as well.  I have often thought and dreamed of attending one of the courses at SFBI and you are allowing us all to join with you.   I'm sure your time is precious there, and I thank you for using so much of it to share with us.

Enjoy SFBI and thanks again.

Hey C - welcome to Seattle.  if you're downtown, you should pick up some bread at Tom Douglas Dahlia Bakery.  And around the corner is Serious Pie.  Seriously good pizza.