I made my San Joaquin Sourdough today with a couple of modifications. 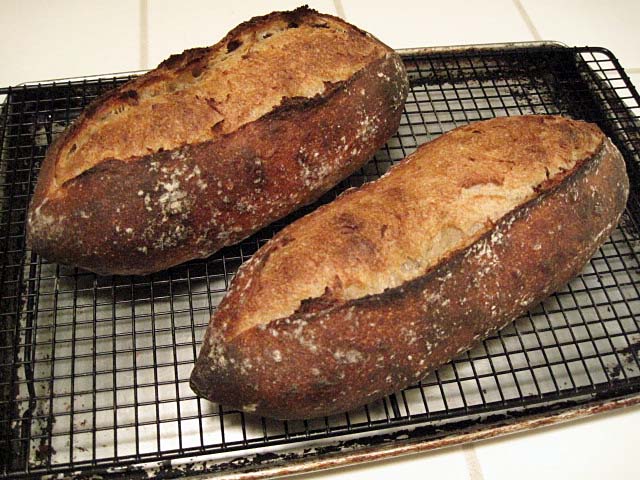 The second modification was to cold retard the dough for a longer time – 36 hours as opposed to the 16-20 hours I have generally used. This was for my convenience, but I've also been curious about the effects of longer cold retardation on this dough.

The dough was of about the same consistency as usual. This is a sticky dough, at 78% hydration, but it was easy to handle with lightly floured hands. The dough had nice extensibility but excellent strength. The pre-shaped pieces and shaped loaves held their shapes very well. I could not say that the longer cold retardation resulted in any problematic gluten degradation. 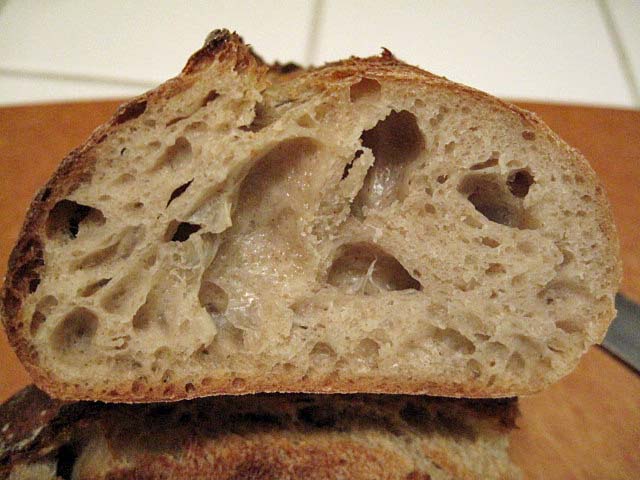 The crumb was as expected with this bread. There was no evident effect from the longer retardation. The flavor, on the other hand, was distinctly tangier. The initial flavor was the lovely, complex flavor of the San Joaquin Sourdough. The moderate sourness came through a bit later, and the flavor lingered on the palate for an exceptionally long time.

I would certainly recommend trying this version to any who have enjoyed the San Joaquin Sourdough before and favor a more assertive sourdough tang to their bread.

Another great bake! I am playing with longer cold fermentation time as well, so far so good!

Hmmm ... The outside temperature here has hovered around 107ºF for the past several days. I wonder if I'm just looking for vicarious cooling.

Anyway, the bread is improved, to my taste, with the longer cold retardation.

They look awesome! The starter you're using in your levain is kept at 100% hydration? Many people have said the longer you keep your dough in the refrigerator the tangier it will be... I guess you liked it!

Thanks for sharing your recipe.... I've been baking in this heat - all my doughs been rising too quickly!

I generally keep my stock starter in the fridge at 75% hydration. I then adjust the hydration according to the formula I'm using when I feed the starter before mixing the final dough.

I'm going to try making it tonight!  Thank you for posting this recipe!

gorgeous loaves. I make this formula as my "go to" bread pretty often now. I get huge growth in the  fridge over the 21 hrs that I have been letting it stay. I then take it out and shape and place in a cloth-lined basket. I usually have to leave it several hours in contrast to your timing to get the rise before baking. I don't preshape...not sure if that makes a difference. I just tuck it into a boule and drop it into the cloth. I have been baking mine in the cast iron pots. It has great expansion and really comes out nicely brown and crunchy crust.

I inadvertently had to leave it a couple days in the fridge the time before last and found the flavor was wonderfully developed. I may try that again. cn

Here is the bake from the other day:

I appreciate your sharing your experience. Your boule is gorgeous!

I think the important thing about this bread is that it get the full benefit of a long fermentation. That means both flavor development and CO2 development. As long as those happen, it may not matter at which stage what is accomplished.

I get a lot of volume increase in the fridge only if I give the dough a "head start" at room temperature. I get most of the expansion during proofing and through oven spring. I look for little or no expansion during the 60 minute "rest" after pre-shaping, and I don't want more than a 50% volume increase during proofing, or it acts over-proofed in the oven. Proofing takes 30-45 minutes.

I need to make clear that this is without an instant yeast spiking - pure levain-raised dough. I assume yours is the same.

levain only and no yeast. Thank you for the kind words.

As I think  on it I get huge rise in the fridge.  I also note that it really wants to get rising during the s and f's and by the last one it is really raring to go when i get it into the fridge. Then when I take it out and don't preshape just plop it in the baskets I leave it  about 2 hrs...your preshape time + rise....there is some rise but as you say not all that much.

I was glad when I made it the very first time that you stated these pertinent facts. You are right in that the oven spring is wonderful and that is where I get the most bang. I mist inside the hot pot after I place the loaf and then close it up place back in 500 oven and lower temp to 460. I bake about 15 min and then remove top and finish. I get  lovely loaves and no fuss with steaming which I am no good at :)

Will try this new formula the next time out but have a lot of breads in the freezer...went kind of crazy with the Nury rye and the SJ and then the Gosselin...sigh. c

That's a really fantastic crumb, David, given the length of the retardation.

I've been playing around with your Bouabsa sourdough formula, using a mix of AP, WWW, rye, and bread flours (ala DonD's suggestion) but shaping the dough into bâtards (I call it my Bouabsa goes rogue bread).

Also used a 100% hydration levain rather than my standard very firm culture, since the timing is easier and I was curious about the difference in taste.  The bread is good, rises beautifully, but am not getting as open a crumb as I'd like.   Not sure if that's due to my handling or maybe underproofing, or both.

Your bread is so nice I think I'll take a break from my own experimentation and give your updated formula a try.

As you probably recall, the SJ-SD evolved from the Bouabsa baguette formula.

I've made this 3 times now using a liquid levain. I know we are supposed to get more acetic acid from a firmer levain, but I think the liquid levain is giving me more tang.

How much www and rye do you use in your "play dough?" Maybe that's why your crumb isn't as open. (They would require a boost in water and the bran in the ww cuts the gluten strands. I don't know what % it would have to be before you would notice - surely more than 10%.)

If you make the SJ SD with mods, please let me know how you like it.

The first time I made your  Bouabsa sourdough formula, I used KAF French style flour.  That flour is pretty amazing and as you noted, the windowpane was fantastic after doing the S&Fs.  Divine taste and beautiful open crumb.

As much as I like KAF's French flour, it's a bit pricey at $10 for 3#, which is why I tried the mix suggested by DonD.

Will drop the WW the next time I mix it - and most certainly will try your amended formula as that lengthy cold retardation comes in handy for midweek baking.  Appreciate your sharing it.

I'll be starting this recipe tonight.  Looks like fun.  It will go in my earthen oven on Saturday.  I'll report back on the results...

I don't recall anyone baking the SJ SD in a WFO before. I'm looking forward to hearing about your results.

I'm just wondering if I'm not the only one that noticed that the flour in the starter is not counted into the overall flour of the recipe. Is that the way recipes are supposed to be formulated? Because the overall salt of this recipe drops to around 1.8% I think rather than the 2% its supposed to hit.

There are a number of ways of formatting a bread formula. The way I chose has all the information you need to make the bread. There are two builds: the final levain build and the final dough build, in which the levain is regarded as one ingredient.

A more complete picture would list the ingredients and their weights and baker's percentages in the total dough as well. This has the advantage of providing the true baker's percentages, since the water and flour in the levain would be added to those constituents in the final dough.

So you are correct, except I would quibble with your choice of the words "supposed to." There are not "rules," there are only conventions, and these are multiple.

Thanks, David. I guess that I just have been using true percentages and find the other types strange. My fault, but now I have a better understanding. I mean it, Thanks!

I started baking bread about one year ago. I started a sourdough starter about two months after that. I have baked your San Joaquin sourdough a number of times now--my favorite bread. However, my wife has been wanting a sour tang in the bread. I have managed to obtain sourness by bulk fermenting and proofing in a warm oven. My problem with that method is that I could not obtain consistency in sourness. Sometimes the bread was mildly sour and sometimes way too sour.

I used your latest formula, baked last night and had my first taste this morning--a beautiful (not too assertive) sour tang! I used a 100% Rye starter which may have helped increae the sourness a bit. I will make this recipe again with my wheat starter and see if I notice a difference. (I have not yet learned how to place a picture on this post.)

I finally have a recipe that satisfies my wife!

Happy wives are good to have! Thanks for sharing your success with the SJSD.

Using a rye sour definitely would increase sourness. I also find that retarding a white starter for 24 hours after it's ripe before use increases the sourness of the bread. I know this violates the general rule to use a starter when it's at its peak activity, but it works for me.

I have been working on an all white sourdough with an assertive sour flavor. Do you bring the starter back up to room temperature before using?

It depends on when I last fed the starter. If I have refrigerated it, I may mix the dough using warm (80 degrees F) water. If I don't, it just results in a slower, longer fermentation, which isn't a bad thing.