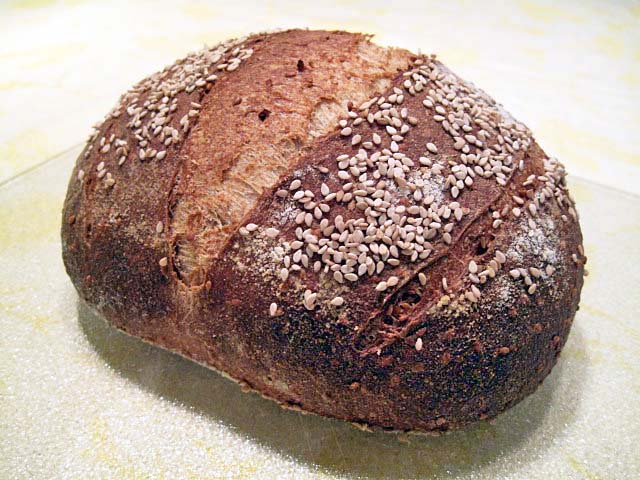 On page 151-153 of Greenstein's “Secrets of a Jewish Baker,” there is a recipe for what he calls “Psomi Bread.” He says he had this from a bakery in New Hampshire and made his own version. His formula is as follows (The weights are my estimates. Greenstein only provides volume measurements.):

Now, over the past year, I've been trying to find recipes that would produce the kind of Greek bread that my daughter-in-law has described having in Greece. About the first thing I learned is that the Greek word for bread is … Psomi. So, Greenstein's formula surely was for a bread of Greek origin. I gather he had no clue that he was making “Bread Bread.”

I also learned that the typical Greek village bread was always made with a sourdough and that it used whole-grain flour. Inclusion of fat – either lard or olive oil – was common, as was the addition of honey. Sesame seeds and at least some, if not all, durum flour were also commonly used.

So, looking at Greenstein's formula, I see he uses a yeasted sponge made with buttermilk or sour milk. I think it's safe to assume this was to acidify the dough to taste somewhat like sourdough would. I see Greenstein uses both AP and WW flour, but all the WW is pre-fermented. I decided to take Greenstein's recipe a step back towards it's presumed origin. More steps may follow in the future.

I also decided to apply some of what I'd learned about whole-grain bread baking from Peter Reinhart's books and used both a soaker and a levain and pre-fermented 25% of the total flour. Following Reinhart's formulas in “Whole Grain Breads,” I divided the whole wheat flour equally between a soaker at 87.5% hydration from milk and a levain at 75% hydration, with the seed culture 20% of the flour. I used my stock sourdough starter which, as it happens, is kept at 75% hydration. I also followed Reinhart's guidance and used 1.8% salt for the total dough, with some of the salt in the soaker (to inhibit enzymatic activity).

So, this is the formula I developed: 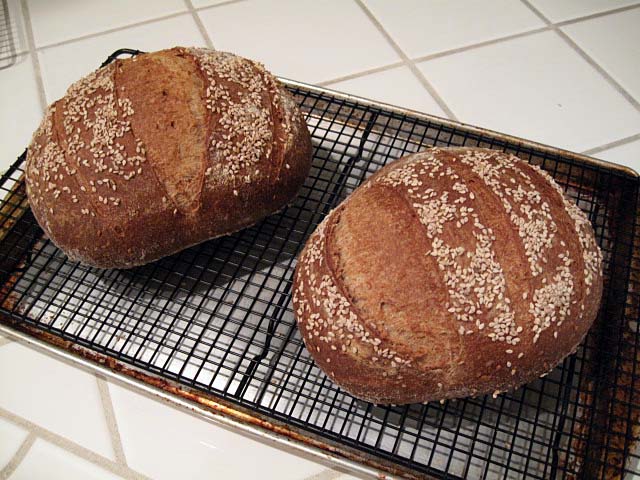 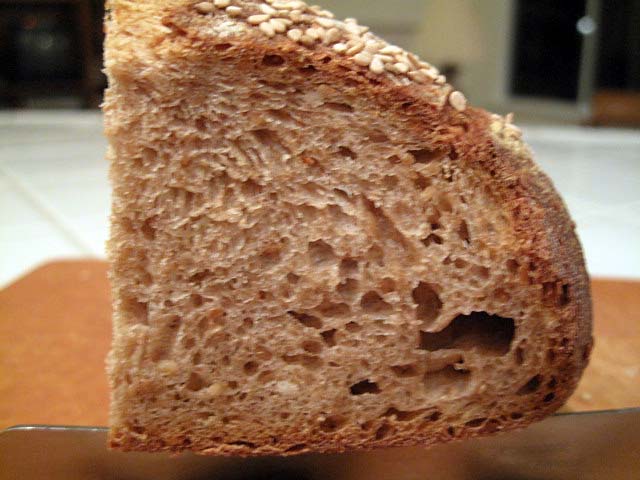 The crust was chewy and the crumb chewy but tender. The flavor was "sweet and sour whole wheat." It was actually pretty sour - more than my wife liked. I have made sourdough whole wheat breads before and did not enjoy the combination of whole wheat and sour flavors, but I did like this bread. This tasting was when the bread was just ... well ... almost cool. It will no doubt mellow by morning. I'm eager to taste it again after a good night's sleep.

That is sensational David! I love how you marry three baking methods together, comes only from an experienced home baker.

I baked 50% wholewheat from hamelman yesterday, it came out very light, almost passes for a wonderbread!!

I am glad to be back and have really missed your posts with their thoughtful details. In your iteration of the formula did you use plain milk or buttermilk ? It only says "milk". I like sour and wholewheat together so will look forward to trying your version. c

You were missed! I'm happy to see you back.

I used 2% milk. I figured Greenstein used buttermilk to get the sour flavor, and I was using a levain rather than a yeasted sponge, so I'd get the sour. And did I!

If I'd used buttermilk, I'd probably have credited it for how sour the bread is. In fact, I think the tanginess is from using a WW levain and cold retarding it for about 12 hours before mixing.

If I were to change the formula, I might use a bit less honey. If you do try my formula, I'd appreciate your feedback with any suggestions.

I'll second your notion that much of the sour came from the WW levain.  Some of the sourest breads I've made were either with a WW levain, or a WW bread with a levain.  Something in the WW flour seems to boost the sour intensity of the finished bread.  My experience is that the sour flavor will intensify, rather than mellowing, as the bread ages.

Interesting exercise, both in concept and in execution.

There are a lot of references to psomi on the web and I have no idea which recipe is "authentic".  Here's one that mentions both sourdough starter and other-than-white flours.

I'd seen that recipe in my own searches. The comment about Greek breads being dense is a common theme. My bread was not at all dense. I followed Reinhart's guidelines for hydration. The Greek bread recipes I've found are typically 56-60% hydration, but use white flour. I may go for a lower hydration next time around.

It was pretty good for a "seat of the pants" try.

And very interesting bread forensics you did in reconstructing its' history and choice of ingredients!

My deconstruction of Greenstein's formula seemed logical, but that doesn't mean it's "true." I guess I'm going to have to take a bread tour of Greece.

I read with interest your deconstruction of this loaf. Not surprised it was sour but it looks good to me. In search of the perfect Greek country bread.

I will definitely be giving it a try and let you know when I post. c

My starter is refreshed with 1/2 cup water and 1 cup flour.  the formula calls for active starter 75% hydration.  How much water & flour would equal 75% hydration?

I feed my starter with 1 part seed starter to 3 parts water to 4 parts flour.

In practical terms, since your scale is probably not accurate to 1/100 of a gram, you round to the nearest gram in measuring.

Thanks so much.  This definitley helps.