How hot can you bake loaves in a brick oven?

I work at a brewpub with a brick pizza oven.  They keep it between 650-750 degrees all day.  There is a lot of down time after the lunch rush, and I would love to bring some dough in with me to bake.  Are those temperatures only suitable for pizza or could I through some thicker breads in there?

The real answer is 650-750 is to hot for most breads. The crust would be done before the crumb was finished. Howeverrrrr.

I think you could get away with baking on a sheet pan covered with parchment if you use a high hydration dough. I would try something like a Cibatta dough. No sugar or malt in the mix. It would be flatter as a result of the higher water content anyway. Leave it in the cooler in bulk until you have a chance to bake it. Cut off a piece and dump on a well floured counter for shaping and I'll bet it would be fine . Keep an eye on the crust color as it will be a quick transition to over done. You might also try tenting with foil after a few minutes to block some of the top heat. I'm sure you can find a way to get it done.

Let us know how it works. BTW, what are you brewing?

We've got five house beers, your standard light, amber, pale, pils and stout.  But for the 3-4 seasonals, we try to focus a lot on Belgian styles, where my particular passion lies, specifically saisons :)

Any brewer has the skills and courage to manage this challenge. Where is home?

Skills and courage are definately a requirement for a brewer.

Today I hopped inside a 15 barrel hot water boiler (empty and cool of course) to patch a leak :)

I have a wood fire brick oven.  Is that temp wall or air?  That will be the difference.  I use the wall temp and subtract 100 deg for cooking temp.  So I look for about 600 as max to bake loaves.  I have baked at higher wall temps and totally burnt the bread.

Not sure what the temperature refers to, it is displayed digitally on the outside of the oven.  I'll try to ask one of the cooks.

A fired pizza oven is a pretty lousy bread oven for a variety of reasons. The first is that it is too hot (if it is in pizza mode) and the second is that the oven will be too  dry for the open door will allow all the humidity to vent out. You will get something along the lines of charred, gray crust and doughy wet interior if you try to make normal loaves - even baguettes - based on one very famous, revered WRO pizza establishment. Smaller loave can potentially be cooked inside but the grayish, bland crust remains an issue in my experience.

I would suggest trying a cloche - either proper or mock up (terra cotta pot base for the bottom with a terra cotta pot/bowl for the top - or even a metal bowl for a lid). I would stick the cloche in the oven for say 15-20 minutes (so it is still not up to oven temp - say 500) and then load the bread. The steam from the bread will temper the temperature in the cloche and should give "reasonable" results and almost certainly much better than the bare oven. I would NOT put the loaf directly on the hearth. It should be too hot. (Some experimentation is needed. For example, if the bottom of the bread from the cloche is too brown try putting the terra cotta base on a spacer/rack so it doesn't contact the hearth directly for example.) Baking time should be a few minutes shorter than normal. One way to do it would be to deliberately pull the bread a bit early - say at internal temp of 203 and then toast slices in the oven. Probably better than trying to push the loaf all the way to 207-210 in the overly hot oven.

Good luck and let us know how you do!

To hot, i'd say but if you know when they are going to shut down the oven for any reason it would be a great time to bung in a batch of bread.
I have made a few batches of stout bread whereby i have used stout either 100% or a 50-50 water,It would seem you are in the perfect position to aquire that wonderfull ingrediant STOUT at a very reasonable cost. Turnout some really nice wholemeal stout loaves and perhaps the boss will let you have control of the oven for some bread sessions.
When i have been away fishing for a week on an isolated beach i have made bread in a camp oven (a heavy cast iron pot) in the camp fire, i reckon if you had your dough piece in there and popped it in the wfo for 15 minutes and then pulled it out there would be enough heat left to finish the bake, if it was smelling burnt from the cast iron when you pulled it then allow a cooling breeze to bring the temp down quickly.
I usually have to add hot burning coals to the lid to get the top browned and make sure the wind isn't cooling 1 side of the pot.
Certainly worth a try.

I've got a lot of ideas floating around right now, stout bread is now one of them :)

I'd also like to play around with using wort (the sweet unfermented beer, loaded with malt sugar and enzmes) in one way or another.

I'm new to this forum, but I've been baking in a wood fired brick oven for eight years.  During the two-day, weekend baking workshops we hold here (near Toronto), we routinely bake pizza (Caputo Tipo 00) on a 750 degree hearth at around 10 on the Sunday.  At about 8 on the morning of the same day, we remove the retarded Pain a l'ancienne dough we made on Saturday from the cooler about three hours before bake time (usually 11).  After the pizza segment has finished, we rake out the fire, leave the heat door off, and when the hearth brick temp has fallen to 650, we divide, shape and bake.  We do use a lot of steam during this maneuver--heat door on--but no tenting (which you would need if there's a live fire in the oven).  They bake, directly on the brick, to an internal temp of 205 in eight minutes flat: good caramelization, crust, crumb.  Try it.  Works, but be quick and make sure your bread flour runs at about 13 per cent.

Following the baguette, we bake kilo boule at 550 on the hearth brick that have been taken directly from the cooler to the oven.

After the lunch rush the oven is generally running a bit cooler, but I think they always have a fire in there.

I've also been thinking of coming in before they fire the oven, I think it is in the 400's in the morning, though that would involve getting to work early :(

Now you're smoking at least with ideas,
how about some pictures of your oven and in the vein i,ll show you mine if you show us yours.
Our oven was built by high scvhool students atending our technical college 1 day a week trying a trade to see if it was what they were wanting to do when leaving school, they also work for a guest employer 1 day a week,school every other day.
It was built by students for students it is in the courtyard outside the training restaurant for our hospitality students.(technical difficulty will have to post pic in another post) 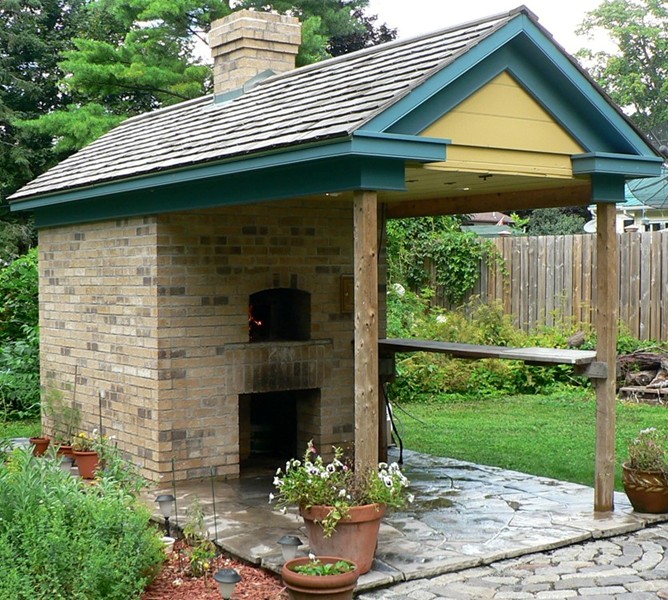 Beauty shot indeed.  That is gorgeous! 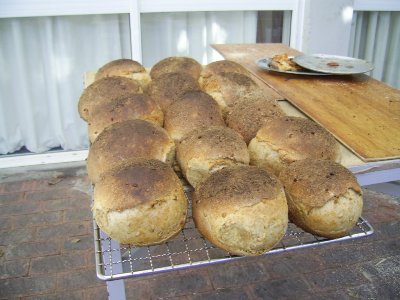 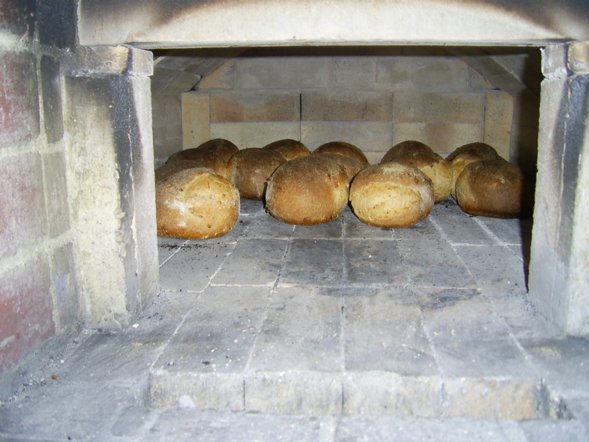 absolutley beautifull a very fine oven indeed, so is the one that is part of the brewpub? do your patrons get to see the baking process.

it looks very similar to the one that we have at the college, now i have to try and find a decent picture for you, i have had trouble in the past shrinking them down i will post what i have already shrunk and try to get a better overall picture for another post

absolutley beautifull a very fine oven indeed, so is the one that is part of the brewpub? do your patrons get to see the baking process.

it looks very similar to the one that we have at the college, now i have to try and find a decent picture for you, i have had trouble in the past shrinking them down i will post what i have already shrunk and try to get a better overall picture for another post

Bagels are not baking in the center or the bottom
HEB Bakery flour
Experiments in "blending" vs milling/...
Sourdough no oven spring or “ear”
Sourdough sandwich bread troubleshooting
END_OF_DOCUMENT_TOKEN_TO_BE_REPLACED