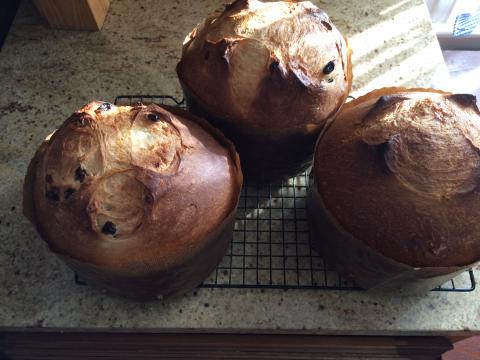 I have been making panettone for some years now but I have always done them with commercial yeast. I've always wanted to try to do them with natural leavening but everything i read about such recipes seemed to indicate that doing them was a life's work.  So, since I am retired and my life is fairly free and clear I thought I'd give it a go. I was also intrigued by this recipe: http://http://www.academiabarilla.com/italian-recipes/regione-lombardia/panettone.aspx

It is one of their regional recipes, roughly translated from Italian and what can only be called a "Nonna" recipe ... some of this, a few of those, etc. There are lot of places where you just have to figure it out.  But, I was intrigued by the way the sugar and eggs were added as an emulsion, by the several dough builds and by the lack of any bulk fermentation of the final dough.

The final and sole proof is in the molds themselves and I did mine at 55-60 degrees F for about 22 hrs. The dough barely came to the top of the molds at baking time but had spectacular oven spring.

I will include my revised recipe below. As I warn in the recipe, this is not a dough for the challenged mixer.  My Bosch struggled.

(NOTE after original post) the starter in the recipe below should be the Italian Sweet Starter described here:

Zest of one orange and one lemon

Note … this is based on a folk recipe from Barilla. That recipe made a number of unstated assumptions. The recipe below is my more detailed interpretation.

Put 5.5 oz. of flour onto the work surface, crumble the sourdough starter in and slowly work in 4T warm water, 1 T at a time.  Knead to a firm dough. Shape into ball. Put in a bowl to double, about 3 hours at 75 F. Move to second dough.

Put 9 oz. of flour onto the work surface and place the risen dough in the centre. Incorporate the first dough into the flour while adding about 7 T of milk, one T at a time.  Knead thoroughly into a smooth dough. Put in a bowl and cover with plastic wrap and let rise overnight at 55F. It should triple.

Dice the candied citron and orange, soak the sultanas (and citrus if it is dry) in brandy overnight.

Set the fruit to drain thoroughly.

In a bain-marie, dissolve the 8 oz sugar into 4 oz warm water to make a syrup, then add the whole eggs and egg yolks and cook while whisking only until all is fully incorporated, smooth and foamy, not to a custard stage. Cool and whisk in the vanilla.

Final Dough in a stand mixer:  (note, this is a significant dough that requires a tough stand mixer).

Pour 2, lbs of flour into the mixer. Add salt. Put 2 oz. of flour on the work surface. Put the second dough on the flour and cut it into small pieces. Put the second dough and any remaining flour from the work surface into the mixer.  Add the contents of the bain-marie and mix. This is a very stiff dough and your mixer may strain. If so, add water one T at a time up to 3-4 T. Mix until dough is at windowpane stage of gluten development. Then add the softened butter, a bit at a time. Continue mixing until you have a satiny dough. Add the zest and mix until incorporated.

Turn the dough out and spread. Incorporate the orange and sultanas using the letter fold method followed by some additional folds to distribute the fruit as evenly as possible.

Divide the dough into three equal pieces (about 2.2 lb each)  shape into rounds and place into 7 inch panettone molds. Place them in a room temperature, draft free place covered with plastic to keep the tops from hardening (you may need to very lightly brush the tops with water or finely mist during the long rise).  Let rise until the centers nearly reach the tops of the molds. At 55-60F this may take 20-24 hrs.

When the oven its up to temperature, make a large cross incision on the surface of each panettone, insert a knob of butter into the cross then place loaves into the oven. After ten minutes in the oven turn the heat down to 375  and after 10 minutes more  carefully rotate the loaves and turn the heat down to 350.  Bake an additional 25 minutes. If the tops appear to be getting too dark, place aluminum foil caps on them.

While baking suspend 2 stout( 1X 3’s worked for me)  boards across the backs of two chairs such that there is about a 7 inch gap between them. When the panettone are done, remove them from the oven and immediately insert two skewers through the panettone molds, parallel to each other and about 1 inch from the bottom.  Invert the panettone and hang each from the boards by their skewers. Let cool hanging. When cool they may be placed upright and the skewers removed. 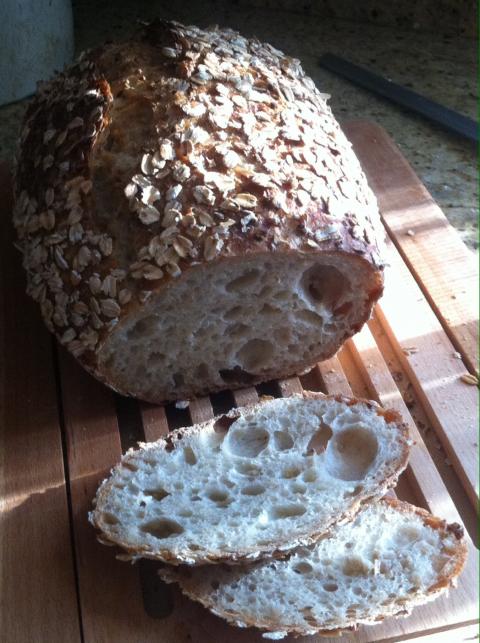 3.  (45 minutes later) Pour the steel cut oats and associated water into a large sieve  set over a bowl. Let drain about 30 minutes but capture and reserve the water. After 10 minutes use the accumulated water.

4. Into your bulk dough bowl, add the oat water and enough other water to yield 650 gm.

5. Add to the bulk dough water, 200 gm starter and whisk to incorporate.

7. Add 1 kg AP flour to water and starter in bulk dough bowl. Mix by hand or on a work surface until all flour is moistened. Dough may be rather stiff.

11. Turn the dough out on to a lightly floured surface. Divide in half. Form into balls and let rest 15 minutes.  Shape into logs (for oval loaves) or rounds (for boules) depending on whether you are baking in round or oval dutch ovens (or oval Romertopfs , as I do).  Roll smooth (non-seam)  surface of shaped doughs into rolled oats to cover the surface and place seam side up into appropriately shaped forms. Let proof about 1hr 30 minutes at 70F.

12. At the 1 hr, 30 minute mark, place dutch ovens into oven and preheat to 500F for about 30 minutes.  Remove dutch ovens, turn loaves out onto dusted work surface, score, place into dutch ovens, cover and place in the oven.  Lower oven temp to 475F and bake 30 minutes. Remove dutch oven covers and bake for 25-30 minutes uncovered at 450F. Let cool completely.  While they can be eaten as soon as completely cooled, the loaves will hold perfectly, uncut,  1-2 days as the moisture from the steel-cut oats permeates the crumb. 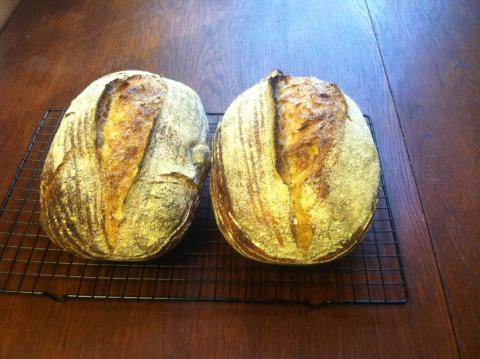 This recipe is for those of you who are experimenting with adding porridges to your dough. You can substitute most any grain into the porridge with good results. The recipe follows the now standard Robertson/Forkish formula for closed vessel baking. The result is a nice, moist and chewy crumb with a solid crust.

Makes 2 loaves of about 1 Kg each

While the starter is refreshing add 200 gm coarse semolina to 700 gm boiling water. Keep the water boiling. Add the semolina slowly in a fine stream so it does not clump. Once the semolina is fully added, turn off the heat and put a lid on the pot. Let the semolina mixture cool.

When starter is fully refreshed place your mixing bowl on a scale and set the tare to zero. Add all of the semolina mixture to the mixing bowl and check the weight. Add sufficient cool water to bring the total weight back to the original 900 grams (200 gm semolina plus 700 grams water). Then add:

Using your hands, mix into a dough .  Let dough autolyse for 30 minutes.

When cool add the salt water to the autolysed dough and fully incorporate it into the dough. When incorporated do several stretch and folds in the bowl. Let rest for 30 minutes and do another set of stretch and folds. Repeat rest and stretch and folds two more times over the next hour. Then let dough rest lightly oiled and covered in warm room temps until doubled … maybe 3-4 hrs.

Divide dough in half, roughly shape into rounds and let rest about 15 minutes. Shape into final form  and place into banneton's .  Proof about 1 hr 30 minutes or until risen about 50-75 % .  Turn out onto semolina or cornmeal dusted surface, score and place in two preheated (to 500F) dutch ovens, Romertopfs or such. Put lids on.    Place into  500F oven, immediately reduce temp to 475F,  bake 25 minutes covered at 475F and 25 minutes uncovered at 450F.

I did a forum post a week or so ago asking if anyone knew more than me about making Joe Ortiz's Pain de Seigle de Thiezac . I didn't get any comments so I supposed the answer was no. So .. here is an update.

This bread is supposed to be all rye made solely with a natural starter. Ortiz humanely suggests that the beginner incorporate a bit of white flour and some yeast into the final dough. Even so, the first time I tried this it was a bear to make. Super glue has nothing over on pure rye dough. And ... pure rye starters that are not soupy wet are, how shall we say this ... subtle in their demonstration of activity. I also feel that Ortiz's transcriptions of bakery recipes for the home baker are poorly executed in print. (Joe ... if you read this I do apologize). He has the recipe starting not from an existing starter but from making a stiff levan from scratch. So ... the novice will spend 2-3 days waiting for something to happen and it may never happen. Or, since the action is so subtle, you may never know if you are successful. Anyone knows that it is MUCH easier to get a starter going with a wet solution. Then, once you have a working starter you innoculate another levan with it.

So, I spent the week getting a good starter going and when it came time to do Joe's recipe, I mixed a bit of the starter into the first levan mixture.

Joe doesn't give weights and Joe makes no mention of proofing temps. So ... I used the usual standard weights for cups of rye and white flour. I did the levan and the first refeshment at room temp (curretly about 60 in our house) over long times. The first (innoculated) levan went for almost 24 hours and the refreshment went for 8 hours. When I put the dough together with the wee bit of yeast, I move it to my proof box at 85 degrees where it went for 45 minutes. Then I shaped it ... not too tough and with less additonal flour to manipulate the sticky dough than with cibatta. I put it into a round shape and put it into a heavily, heavily floured round cane banneton using rye flour. It went back to the proof box for another 45 minutes. The oven preheated (450) with my stone for the 45 minutes. The loaf popped right out of the banneton on to my parchment covered peel. It baked for 50 minutes with another 10 in the turned off oven at the end.

If I can figure out how to get pictures to this site I'll post them. I did upload them but got a blank acknowledgment screen so maybe the image upload fairies were sleeping.

If it takes, here is the loaf:

And here is the FlickrURL: