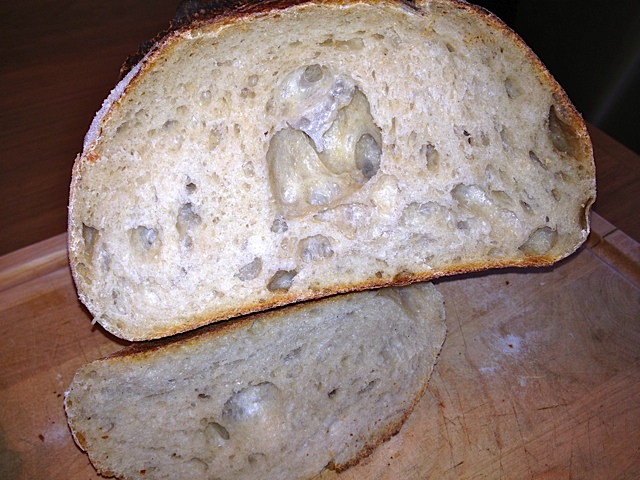 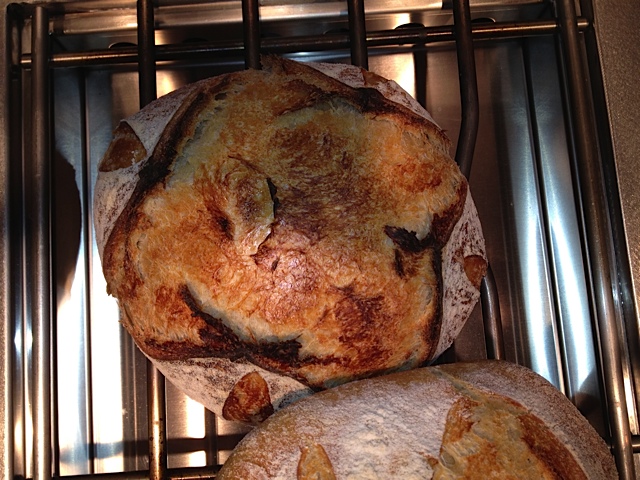 I had an odd experience yesterday making the dough for Tartine Country Bread.. I normally us KA AP flour - because I think it yields a softer textured crumb - I had found that using KA bread flour was easier to work with - but once I got more comfortable with slap and fold, etc. - working with all purpose was fine.  I had some bread flour left over that I wanted to use - so I used it and 10% wheat flour with the standard recipe yesterday.  I do the initial mix in a spiral mixer.  What was odd, was that during the initial mix, the doug came together unusually quickly - in less than 3 minutes of mixing I had a very cohesive ball.  A let it autolyse for about 25 minutes and then added the salt (Black Diamond Kosher) and 50g more water to bring the dough to 75% hydration.. Usually when I add the water and the salt, the dough comes apart and then comes back together... this time - the dough stayed in a cohesive mass (one chunk broke off - but stayed as a separate piece (still using spiral mixer)).  I added 50 more grams of water (now 80% hydration) - but the dough didn't really come apart. To avoid over kneading, I turned off after 4 minutes and put it into a large plastic tub that I always use for the bulk ferment.  The dough already felt developed at this point in terms of elasticity - also strange.  I then ended up having to go to an unexpected appointment after the first turn (30 minutes into the bulk ferment).  Because I was going to be gone for several hours, I put the dough in the refrigerator to retard the bulk ferment.  I was gone for about 3.5 hours - when I returned, I completed the 2nd turn.  Again, the dough already seemed to have very high elasticity and the texture was like a fully proofed dough.  At any rate, i did two more turns and then did the initial shaping about 5 hours later.  During the initial shaping, the dough had high elasticity and essentially maintained it's shape as a ball (never had that happen before).  30 minutes later I did the final shape and again put the dough back in the refrigerator and then slashed and baked it about 7.5 hours later.  here is the result. It's been quite dry in Northern California where I bake - I'm not sure if that's why the flour absorbed so much flour so quickly - but the bread turned out surprisingly well given all the timing errors through the bulk ferment and the final proofing.  The crumb texture is also remarkably tender for using bread flour.. I'm a bit confused about why it had such significant oven spring. 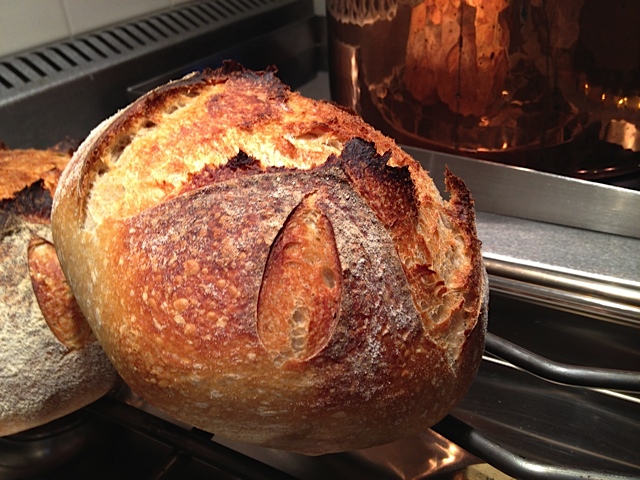 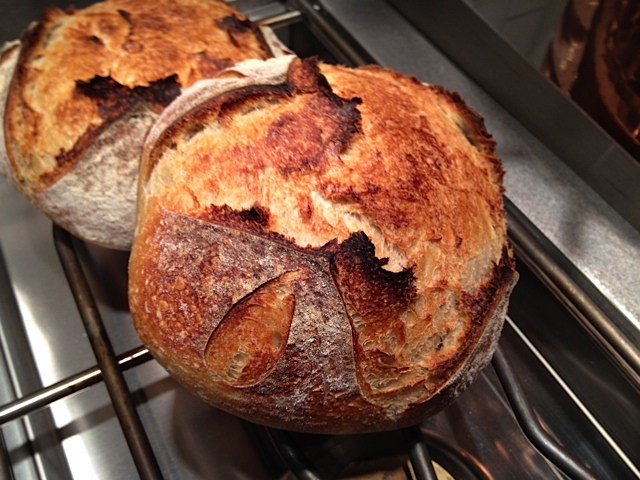 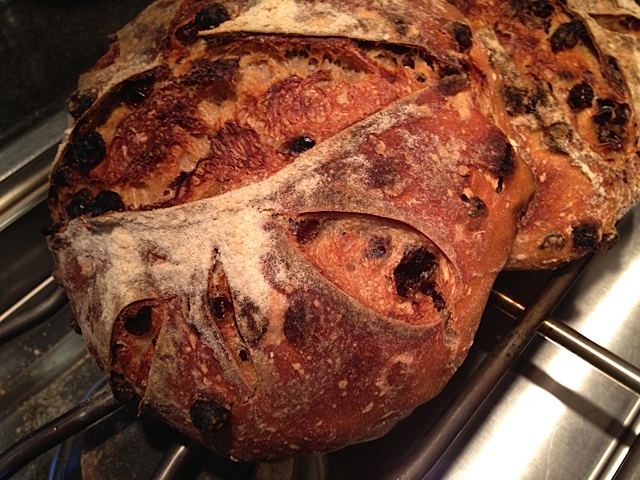 Happy with the oven spring here :) I've been struggling to get cuts I'm satisfied with the disposable razor blade on a stick idea, so I decided to find an old straight blade razor (think what a barber would have used years ago).. I found one and had much better results - I've often admired Della Fattoria's breads (rosemary lemon, in particular) and have wondered how they cut the designs in the top.  I find when I use the disposable blade on the stick - the edge of the blade occasionally get's caught when I'm making a cut and tears the bread slightly. Using the straight blade razor worked great - it will be my new method of choice - now I just need to learn how to sharpen the blade on a leather strap.

I regularly use and SP5 Micro Spiral mixer, I've had good results with it, but as others have noted, for high hydration doughs - it's usually better to use the double hydration method.  I purchased mine from TMB Baking south of San Francisco and they are extremely helpful.  Although, it's often reported to be made by "Esmach" it's actually made by Avancini - an Italian cooking equipment manufacturer.  I recently had a chance to use a Haussler Alpha spiral mixer.  The mixer looks almost identical to the SP5, however, it has a tilting head and a removable bowl.  I haven't had that much trouble cleaning the SP5- you just pour some water in and after dissolving any remaining dough, you wipe it out clean.  Obviously, because of the tilting head and removable dough - the cleaning process is much more expedient with the Haussler.

What really surprised me, however, is that it typically takes about 5-6 minutes to get good dough cohesion with the SP5.  When using the Haussler, the dough cohesion was achieved in less than 4 minutes, which was quite amazing.  Of course, the conditions weren't scientifically identical, but I was making Tartine's basic country dough recipes and within 100 miles of the location I typically bake, so certainly substantially similar in terms of climate, ingredients, etc.

If I get a chance, I would like to try making brioche in the Haussler, the Tartine Brioche recipe is quite wet, and I have use the double hydration method with this dough in the SP5.  I'm wondering if the Haussler could achieve cohesion without having to use the double hydration method.  I haven't measured the revolutions per minute with either machine - so I'm not sure if there is any difference there either.

Still would like to get better oven spring - but happy with these nonetheless.

I'm pretty satisfied with these- the lamination worked better than last time I tried - I think I was keeping the dough too cold last time around. 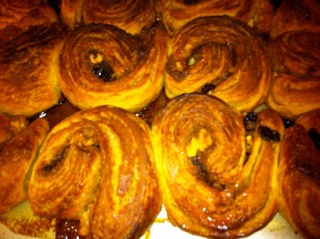 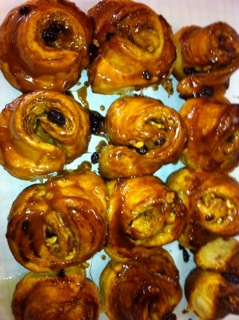 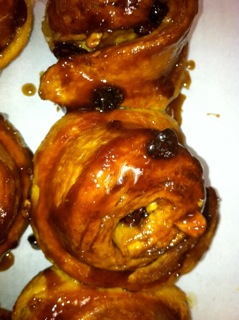