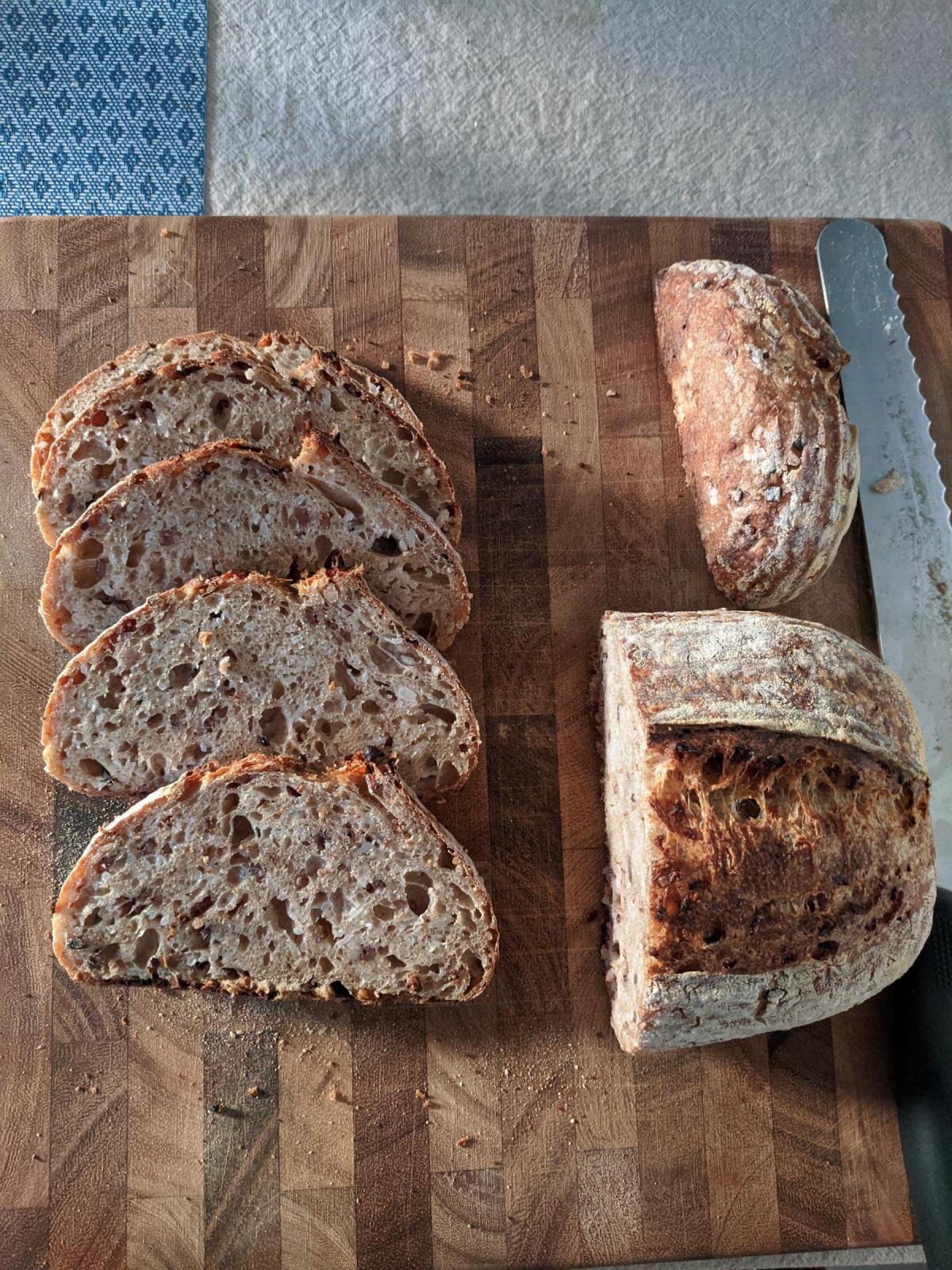 I had cooked white rice and mixed (black and brown) rice in hand so I decided to add in using an adapted brown rice porridge bread recipe from the book, Chad Robertson's Tartine Book No. 3.

30 min autolyse, 4 hour bulk fermentation (4 sets of stretch and fold), cold-proof in the fridge for about 18 hours. 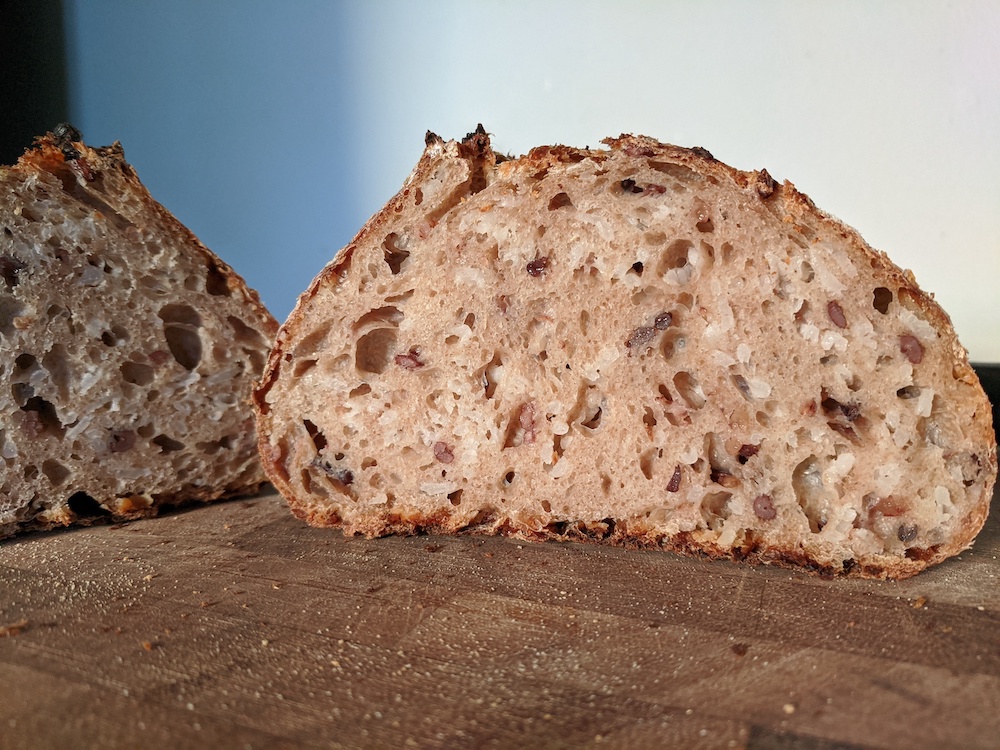 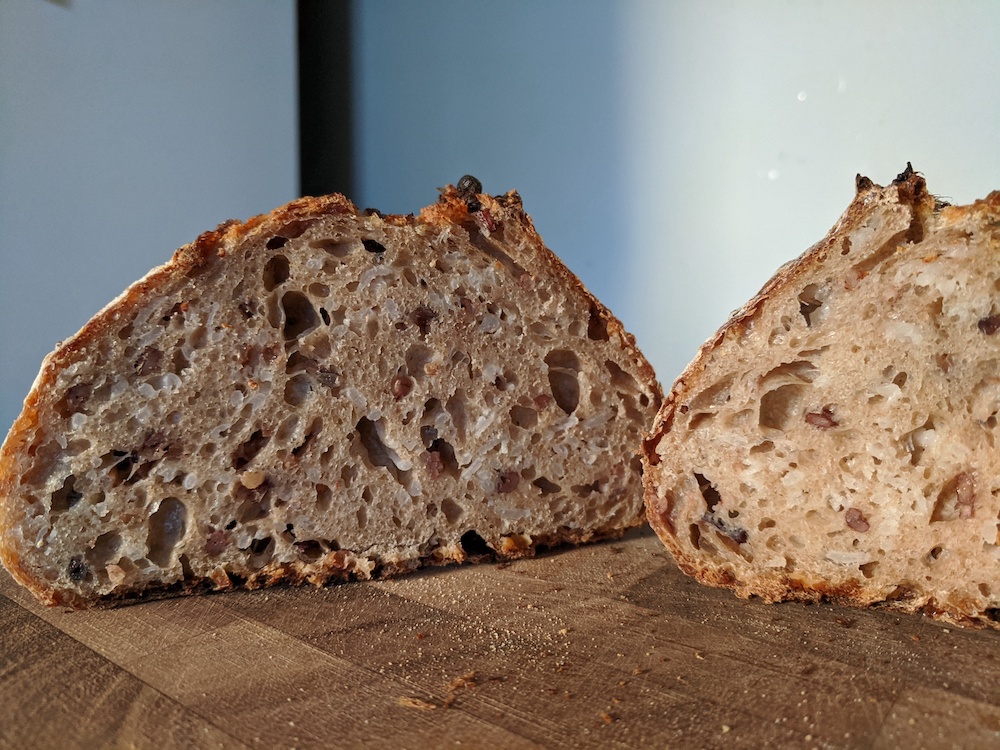 I love the crust. So crisp and not too thick. I wish I could reproduce this kind of crust every time I bake!

Crumb was moist and chewy. Unlike other porridge breads such as oatmeal or corn porridge bread, the crumb was not so soft and velvety. It rather resembles that of cracked wheat porridge bread I've baked.

The aroma of the spelt flour seems to overpower other ingredients. I wonder what it would be like if I used just wheat flour as in the original recipe. 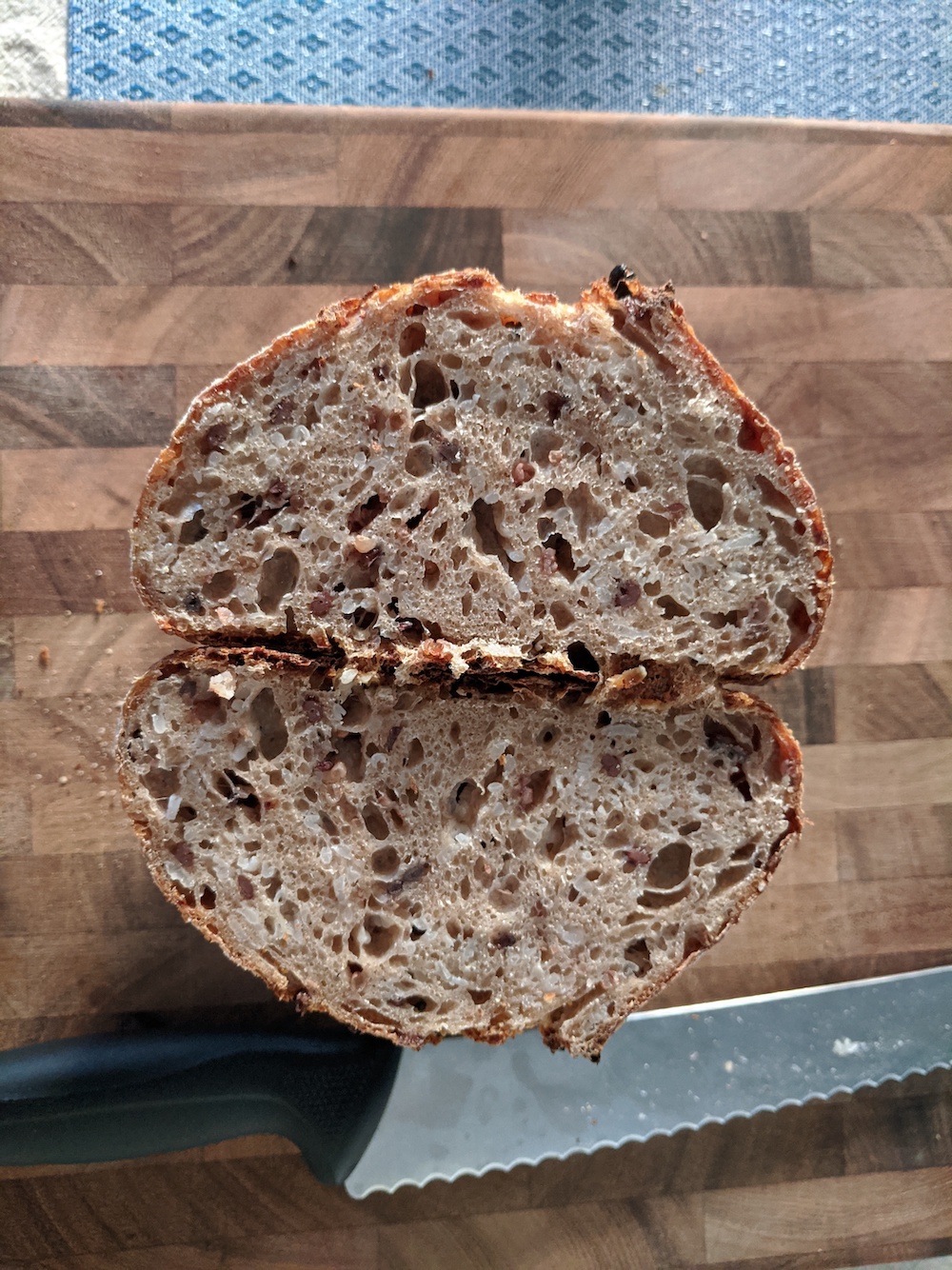 An experiment: a more vs. less open crumb

I wanted to see how kneading time can affect the openness of the crumb.

My hypothesis is longer and vigorous kneading will contribute to less open crumb, holding everything else equal.

Using the same starter, same recipe, formula, weight, tools, etc., the only difference was the kneading part (and the number of stretch and folds).

Recipe was adapted from the Perfect Loaf (https://www.theperfectloaf.com/sprouted-buckwheat-sourdough/), but I made a few modifications.

I substituted half dark rye flour and half barley flour for buckwheat flour; cracked wheats, rye chops, and rolled oats for buckwheat groats. Following the two-hour autolyse, I kneaded the doughs separately two ways. Bulk fermentation lasted for four hours, and rested at room temperature for an hour after shaping before putting in the fridge.

I lowered the hydration level to 82% because I was not confident in handling high hydration doughs. 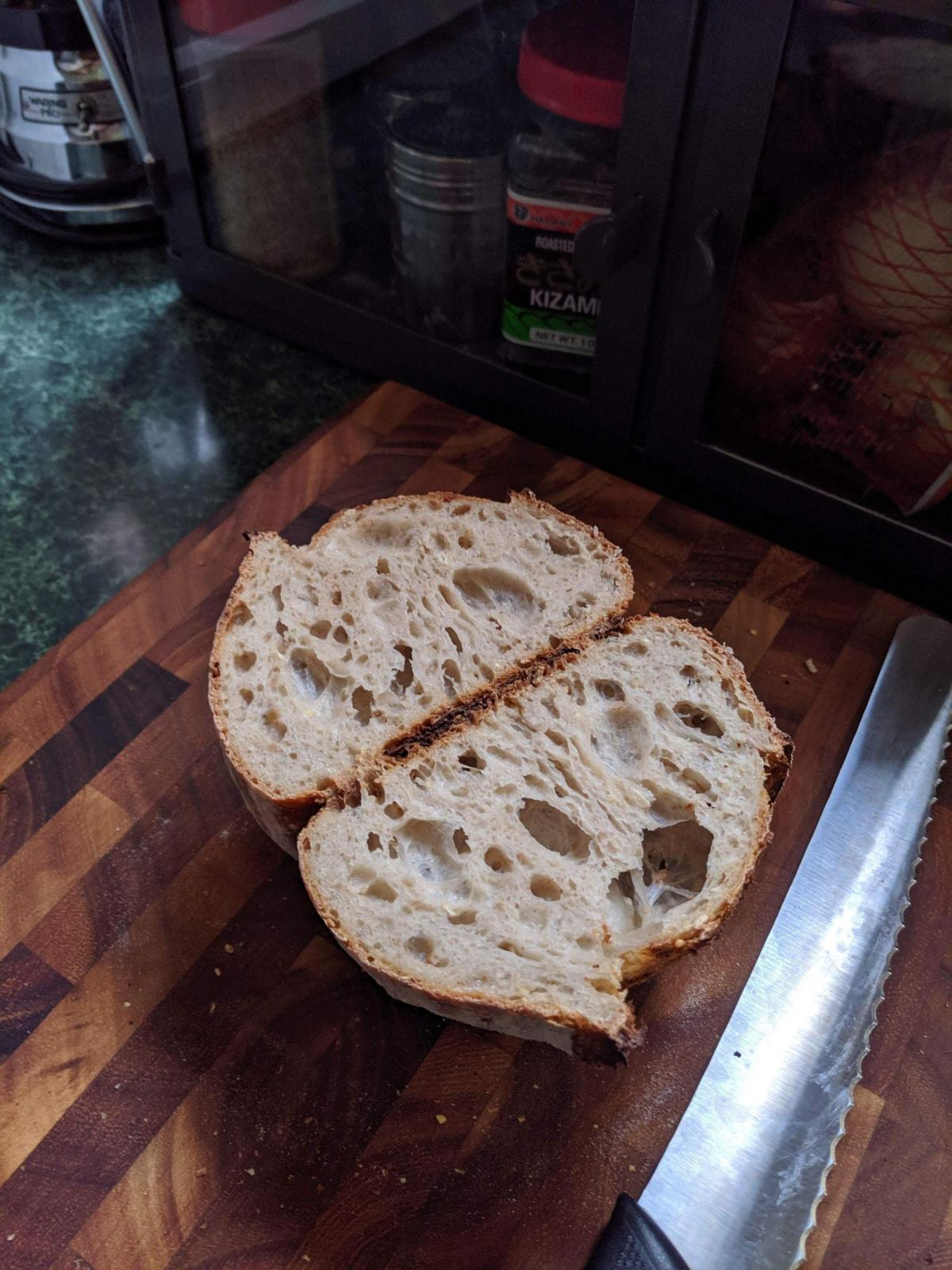 2. Kneading by hand (slap and fold) vigorously for 25 minutes. Stretch and fold during bulk fermentation 3 times. 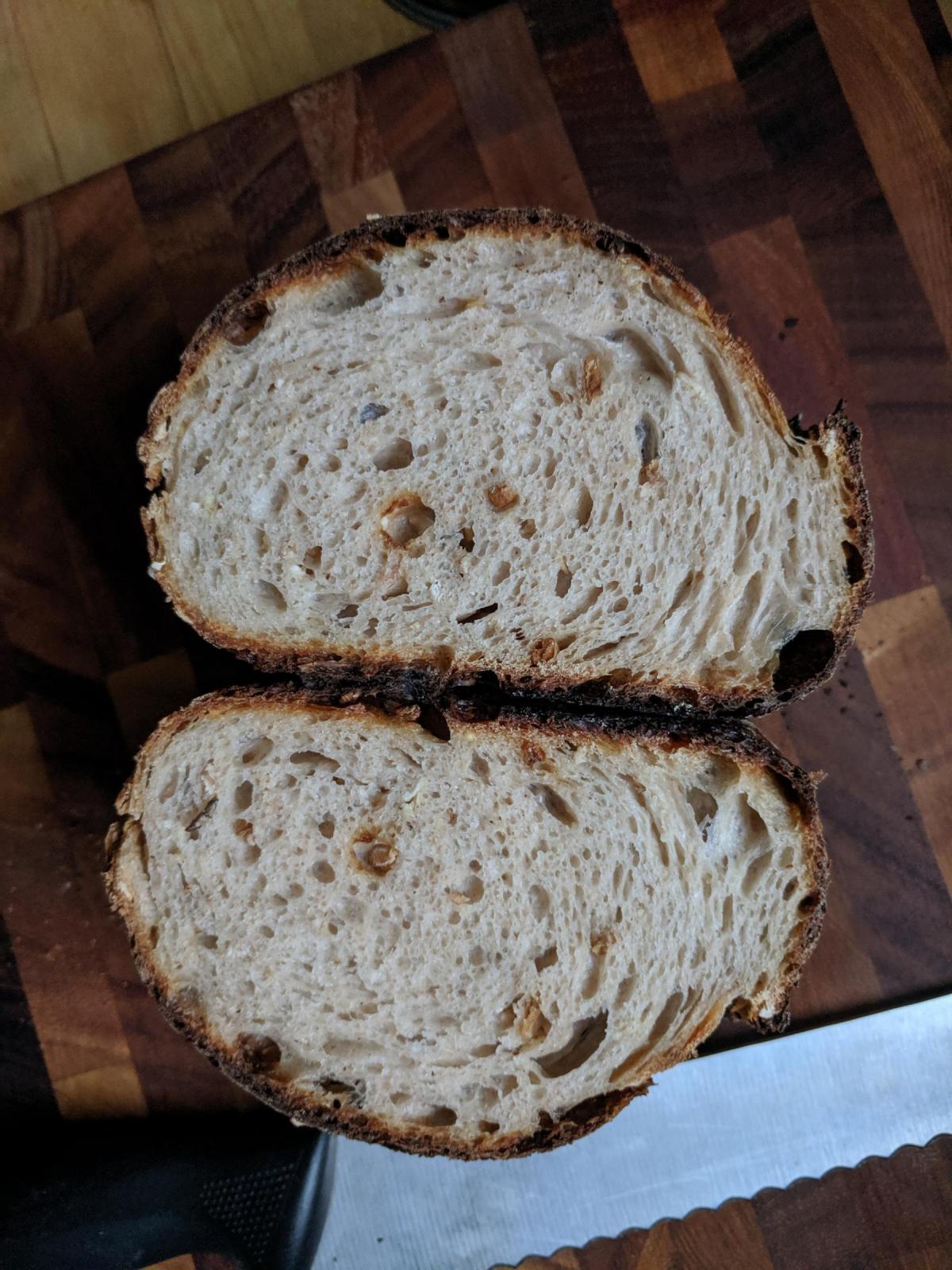 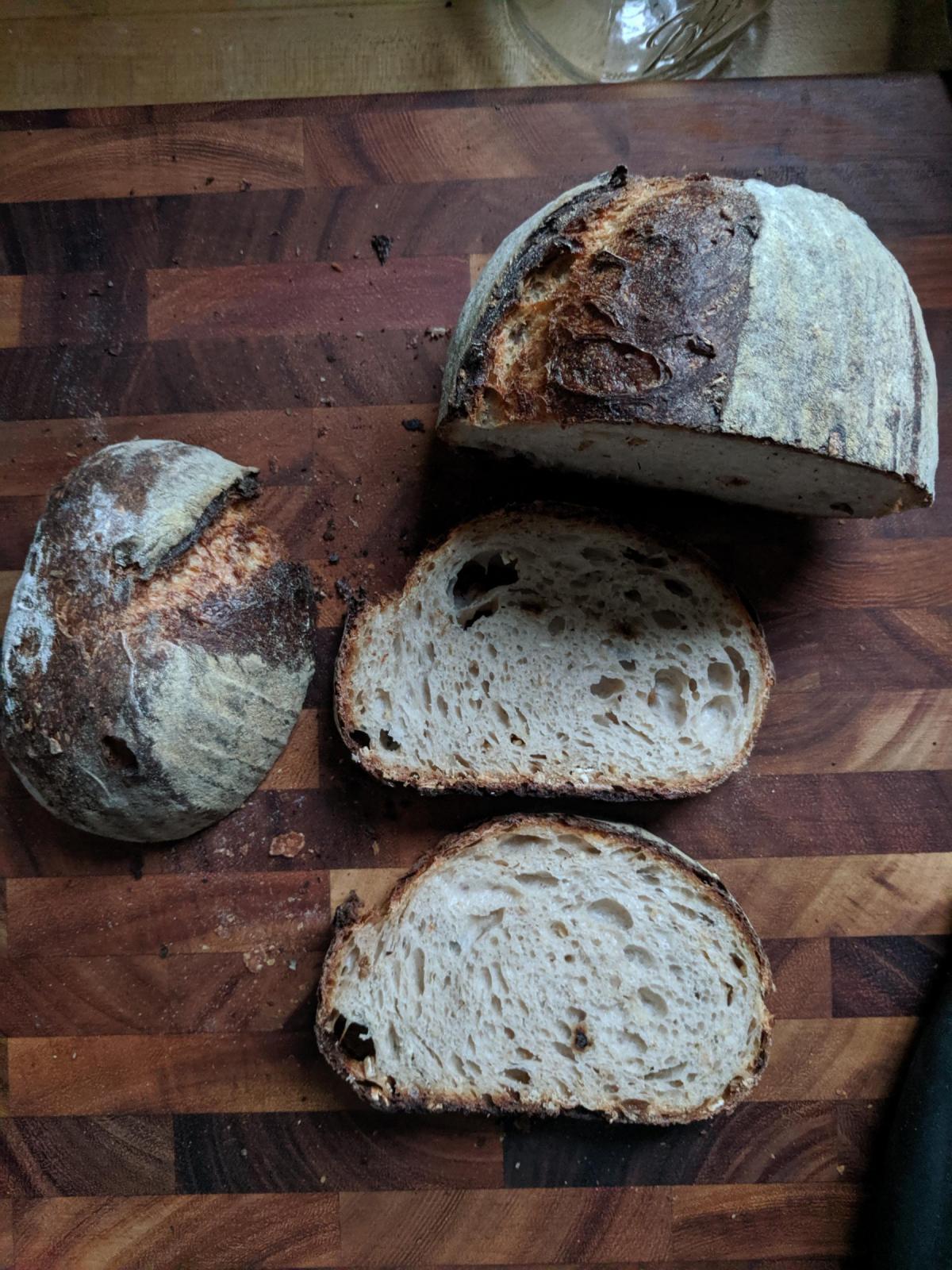 Compared to the dough from the first experiment (less kneading), the second batch was more workable and stronger. After the second stretch and fold, I felt it was almost impossible to do another (did it anyway).

Although I tried my best to control for the factors other than kneading, I accidentally left the bread (#2) in the oven few minutes longer that I burnt the bread.

Overall, I liked the less opened crumb (#2) better. The crumb was so soft and moist. I don't fully understand but I think it was tastier and had more flavor than the open-crumb one (#1). It was a fun experiment!

Next time, I will try to use different autolyse duration to see how it affects the crumb.