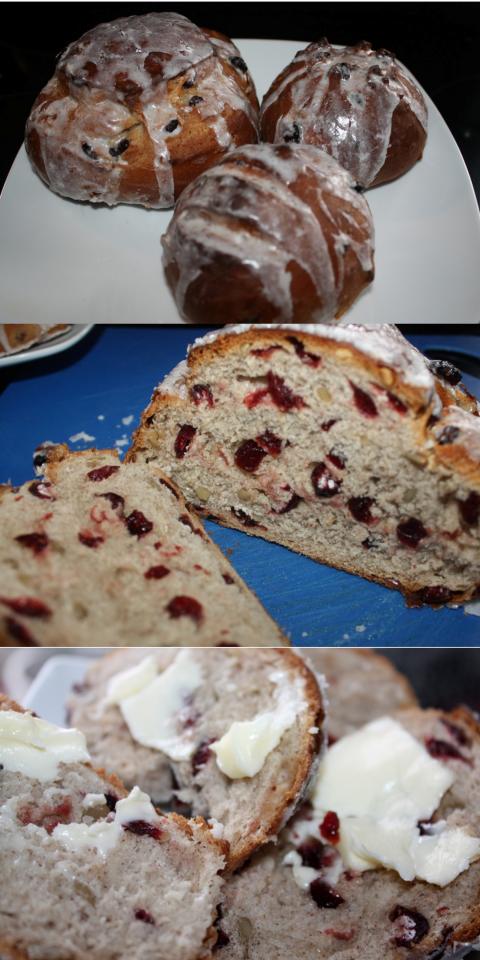 My basic white bread recipe with the following additions: 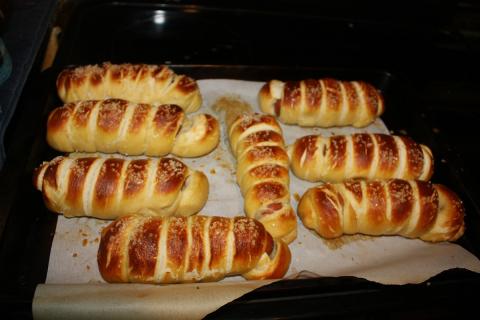 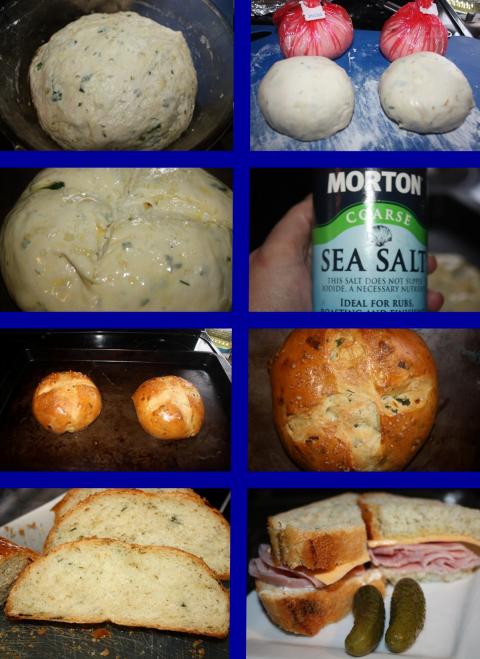 From left to right, top to bottom

This recipe makes one standard loaf, put once again I quartered it for four mini boules, two to bake now, two wrapped in plastic for later use.

With this kind of salt

Here they are, straight out of the oven

Here's the close up shot

And here's the sandwich shot. 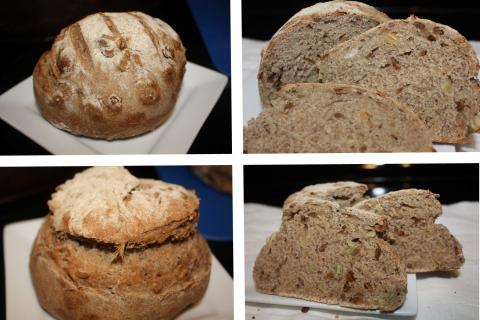 This is a 100% whole wheat sourdough bread with lots of nuts and seeds mixed in (walnuts, almonds, cashews, pumpkin seeds and sunflower seeds).

I have recently taken a personal chef type endeavor, not like a gourmet chef, where I show up with wonderful ingredients and fix a 5 course meal. It's more of a I show up in your kitchen and fix dinner out of whatever I find in your kitchen. It's a hey everybody, grandma's going to come and fix us dinner kind of a thing.

I like to include fresh baked bread with the meal, but because I am only going to be there for 2-3 hours, I need a bread which I can make up in my kitchen ahead of time, transport to the site, and bake in their kitchen. And it needs to be something that doesn't require any fancy oven set up, something that I can have baked and cooled enough to eat within the time restraints, two hours.

So here is the recipe: 3/4 cup warm water with one tablespoon sugar dissolved in it, one cup active sourdough starter (I use a 100% hydrated starter), and one cup whole wheat flour. Mix together in bowl and let it sit for 30 minutes to one hour. Then I added one cup of unsalted nuts and seeds, I teaspoon salt and another cup of whole wheat flour. And mixed that in. (I'm totally old school, all my mixing and kneading is done by hand) And then gradually knead in about another cup of flour to make an elastic dough. I would have said smooth, but there's a lot of nuts and seeds in there!. It then gets a thin coat of oil and is allowed to rise until doubled in size.

This is enough dough to make a large boule loaf. But what I did was punch it down, knead it lightly, and cut it into four quarters. I pre-shaped each quarter into a mini boule. Two of the loaves were baked in my kitchen, after being allowed to proof for about an hour.

The loaves shown here are the ones that had been in refrigerator. The top loaf went directly from the fridge to the oven, the second got to sit at room temp while the first one baked (425F, 45 minutes, light steam). I wanted to compare crumb between the two. Here's what I got.

What I ended up with was four quite tasty although rather dense loaves (which is what I get normally with this particular recipe unless it retards for day or so). 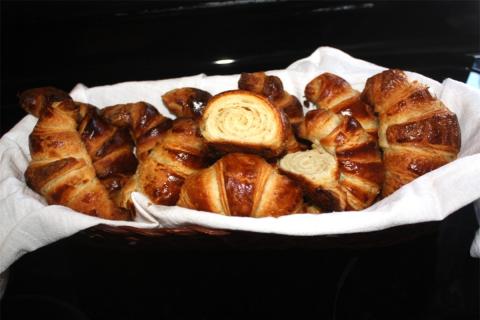 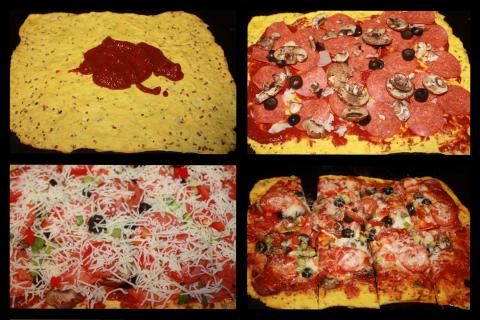 Crust is a roasted onion sourdough with turmeric and quinoa

Sauce is home made

The recipe may be found in my previous blog. 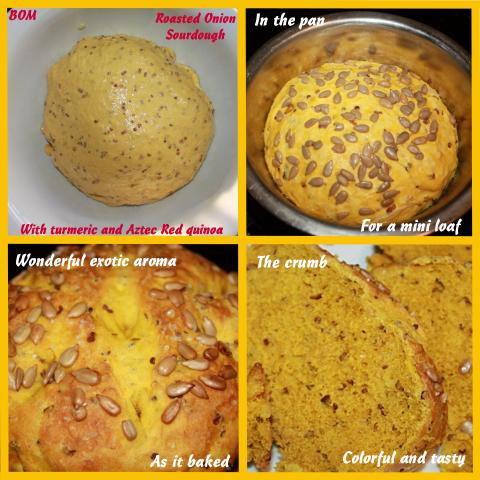 I belong to several bread baking sites, and on one of them this was the Bread of the Month. The recipe can be found here: http://www.hearthbakedtunes.com/2014/01/pain-au-levain-with-caramelized-onions.html

To this recipe I added one tablespoon of turmeric, and one cup of pre-cooked Aztec Red Quinoa. It made a wonderful aromatic, colorful bread that had a mildly exotic flavor.

I made one large loaf, a mini loaf and a pizza. Good stuff, give it a try. 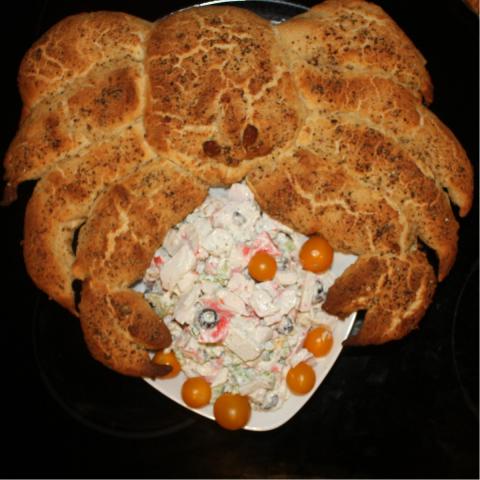 This is a tiger bread, an although the bread is not my best (I will try again!), I shaped the rolls as a crab to go with a crab salad. Just trying to have a little fun today. 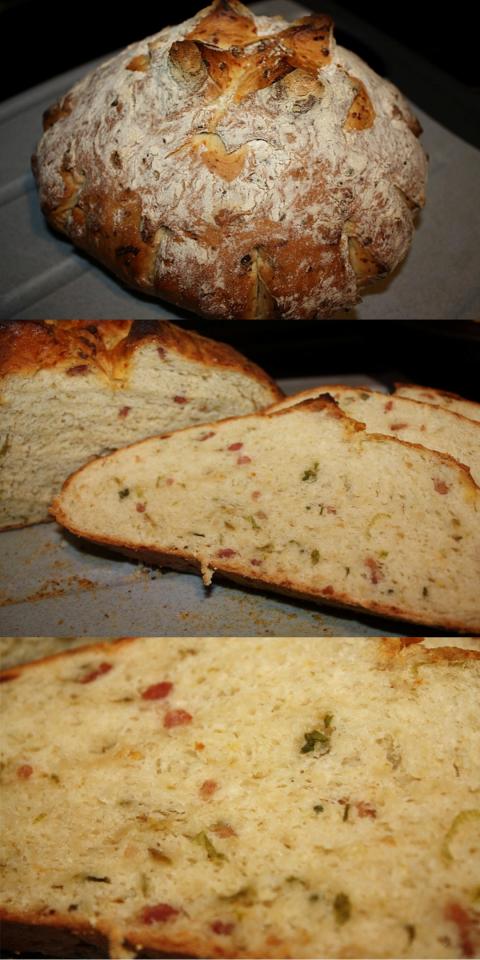 A basic white bread with the addition of onion, garlic, cheese, green chili and bacon. An excellent breakfast bread when serving egg based dishes. 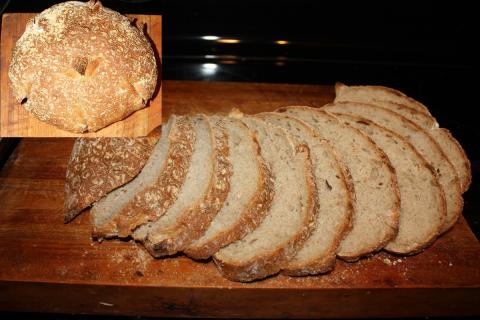