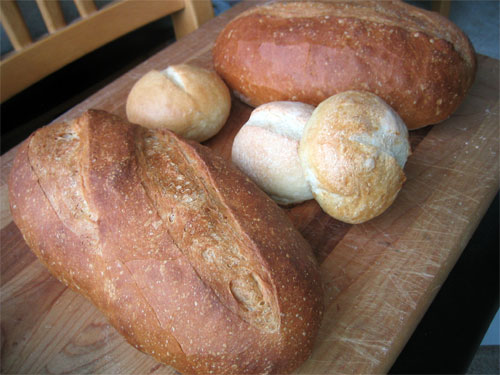 I baked these this weekend. It doesn't get much simpler.

I don't think this recipe, without a preferment, is quite as tasty as the rustic bread or the pain sur poolish I often make, which both use an overnight preferment. Still, it is quite good.

Combine everything in a large bowl or the bowl of a standmixer. Mix for 5 to 10 minutes in the bowl with a wooden spoon or in the standmixer on low with the dough hook.

Scrape the dough out of the bowl onto a well-floured surface and knead by hand, mixing in more flour, if necessary, until you have a nice dough that feels moist and tacky but isn't so sticky that it sticks to the surface.

Wash your bowl and coat it lightly in oil. Return the dough to the bowl and roll it around gently to coat it with oil. Cover the bowl with plastic wrap and set aside to rise for an hour to 90 minutes. Gently degas the dough and allow it to rise for another hour.

Degas it again and divide it into loaves or rolls. I scaled my rolls at 3 ounces. I made a half dozen rolls and still had enough dough for two large loaves.

Shape the loaves and rolls, cover gently with plastic or a damp towel, and allow to rise once again until at least doubled in size, approximately another 45 minutes to an hour. During this time preheat your oven (and baking stone, if you use one) to 450. I also preheat a brownie pan into which I pour a cup of hot water just after placing the loaves in the oven. This creates steam in the oven which increases the crunchiness of the crust.

The rolls baked for about 20 minutes at 450. I rotated them once after 10 minutes.

The loaves baked for around 20 minutes at 450, then I rotated them, reduced the oven temperature to 375, and baked them another 25 minutes. The internal temperature of the loaves was in the ball park of 200 degrees when I removed them from the oven.