When is the proofing done?

When is the proofing done?

Hey all - its my first time here just registered to get involved with the various baking forums.

I recently followed the Sough Dough Starter guide from the Clever Carrot website and its all gone quite well. I am on day 6 and my starter is doubling in size roughly when fed within 2 hours. I created a levain from my main starter (this doubled over night) so I am attempting to make my first loaf.

The recipe is the one off the clever carrot again.. Sourdough Bread: A Beginner's Guide - The Clever Carrot

All is going well so far and I am just on the bulk rise but not sure how long to do this for  - it states that the rise can take between 2 and 12 hours depending on temp (which is fair enough). However is there anyway to tell for sure when its done with the bulk rise? I read about pressing it in and seeing if it springs back is that a good test?

My temp is about 23-24c in a cupboard with my boiler so I'd imagine it might take 6'ish hours.. but any ideas on how to check so I don't let it over rise? Currently I am about 5 hours in and I'd say its almost doubled in size but not quite

well, a complete recipe should really tell you how much of a rise you are trying to achieve during bulk ferment, or include pictures or other descriptions of how the dough will look/behave when it is done proofing. maybe you can find some similar recipes online with more details? i like breadtopia’s recipes and they often include videos and/or pictures.

this appears to be an all-white flour, fairly low hydration recipe. if the dough has already doubled in size, i’d move on to the next step, but might be concerned it is overproofed. i think it is rare for a sourdough recipe to shoot for doubling (100% increase in volume), i see ~50% increases suggested more often, but those are for higher hydration loaves, so, take that with a grain of salt. ;)

good luck with your first loaf! it will probably be tasty no matter what, and you can always come back for post-bake advice before you try again. looking back (~8 years), my first sd loaves were underproofed and poorly shaped, but (a) i thought they were great 😆 and (b) they got better 😀. this forum has been a big part of the improvement.

Thanks for replying and the advice.

It came out alright I think especially for a first go - the texture seems good and the crust has a bit of crisp etc I'm suprised.

The only thing is I think I made a mistake with the levain. I think I caught it too late maybe, as when I mixed it up it had an alcohol tinge to the smell. And the loaf now has this same alcohol tinge - don't get me wrong its still nice but I don't think thats right is it? Whats odd is the levain was at least double size when I mixed it up which made me think it was fine to use. Any ideas?

Oh also my cut on the loaf I don't think was quite deep enough as it seemed to disappear when baked. 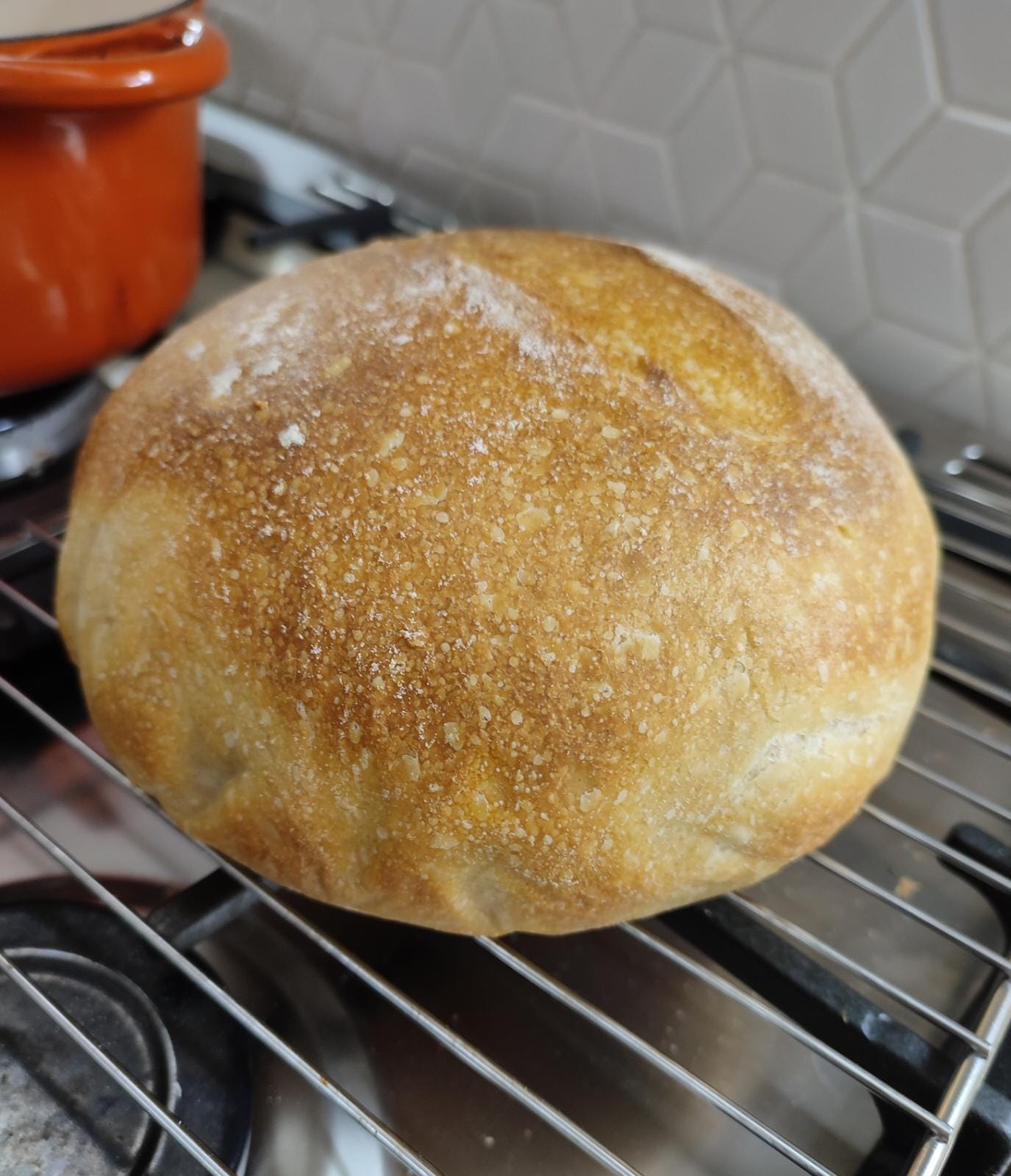 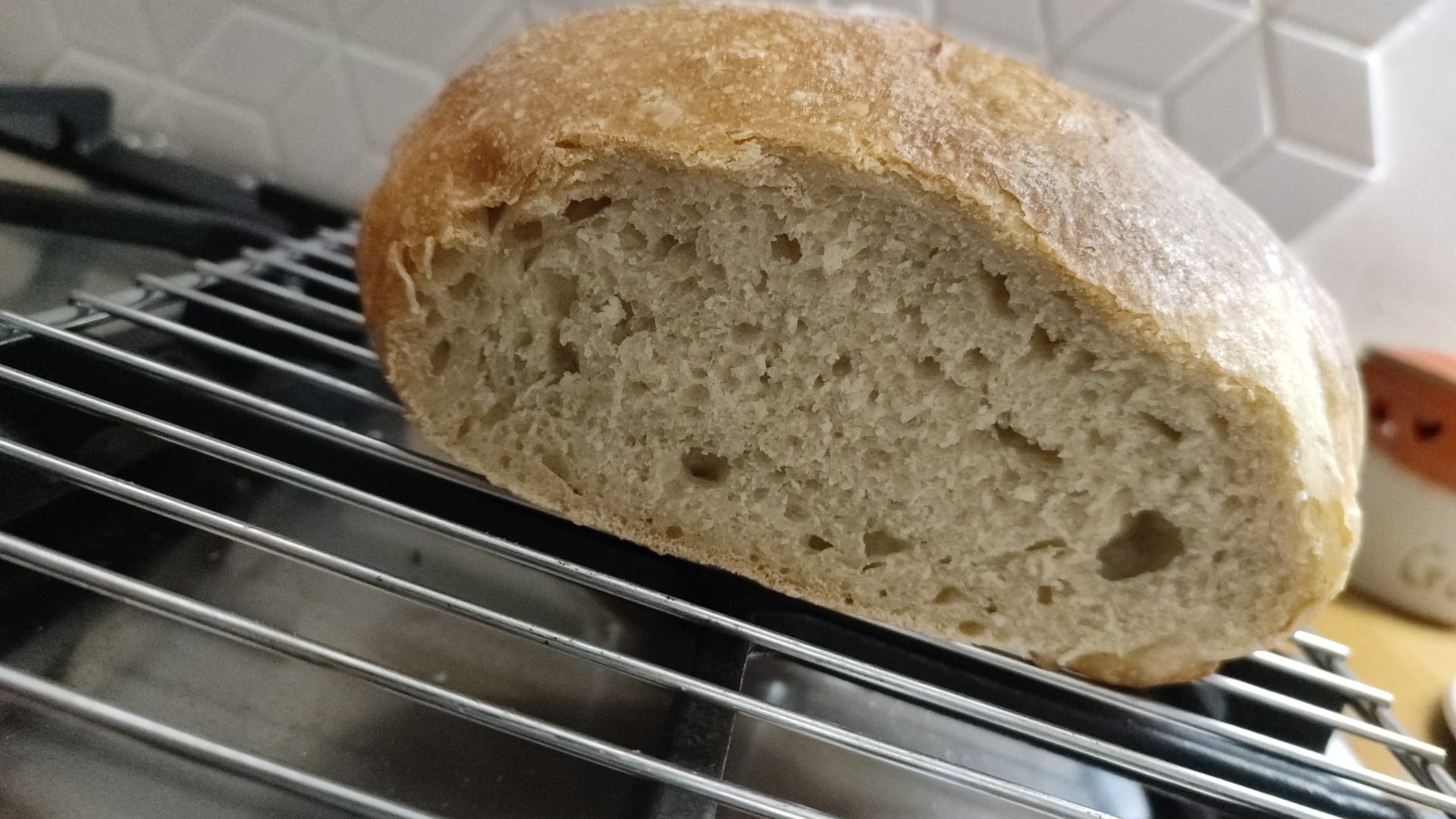 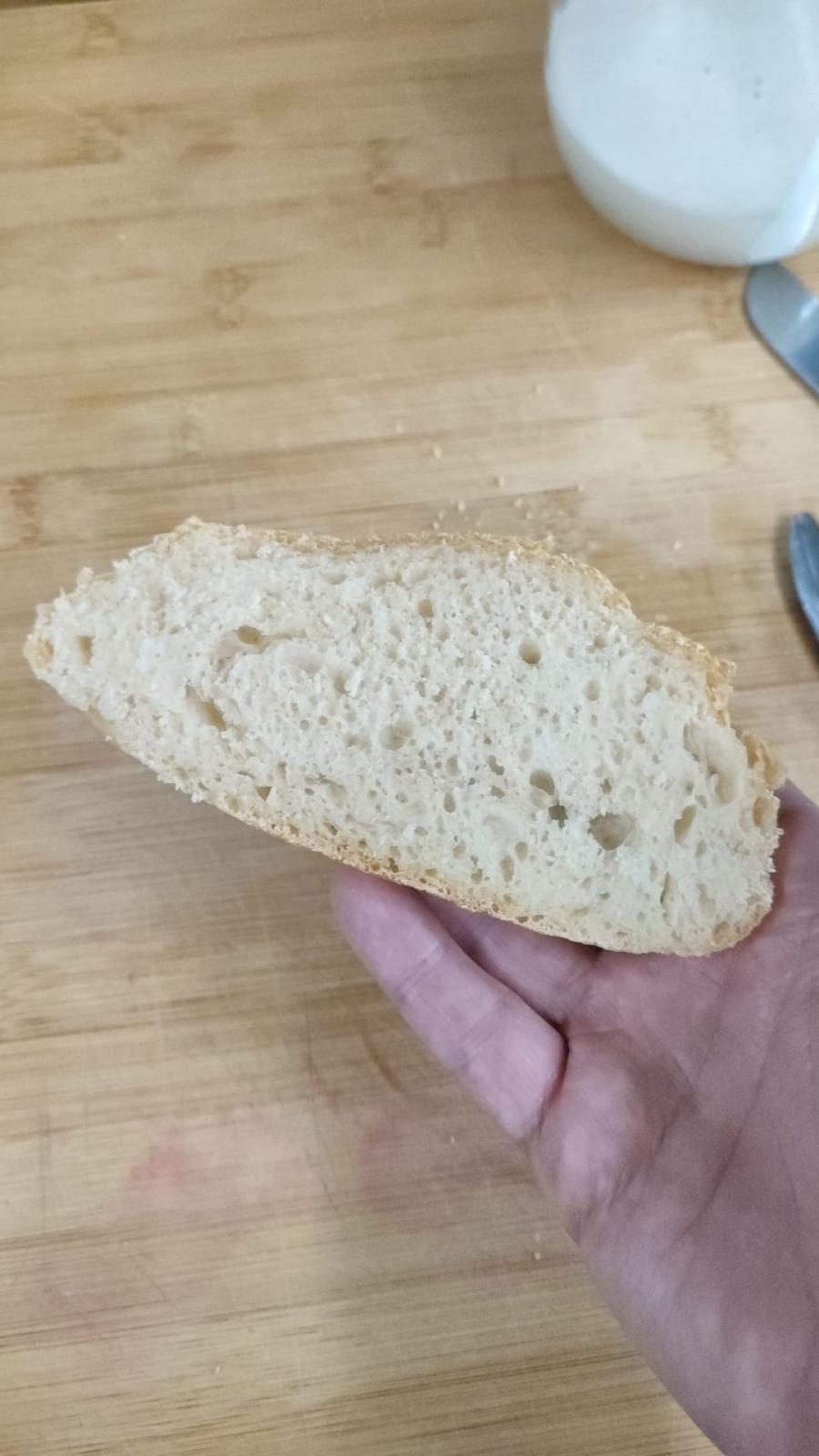 I used 25c water and around 26c fermentation on the levain and left for around 12 hours - someone mentioned using cooler water and a lower temp fermentation to reduce this? Perhaps this was why, so it had risen to double and was active but the temps caused the alcohol tinge?

i think i was typing away on my reply and didn't see your PS :)

acetone and alcohol are different. can you clarify which you are smelling? i think acetone would be a sign that your starter is not actually ready to bake bread yet. acetone is a more acute poison than alcohol ;)

higher temperatures just make fermentation go faster, so to a first approximation more time at lower temperature gives similar results to less time at higher temperature. if your levain was past-peak after 12 hours, you could fix that either by lowering the temperature, or by giving it a larger feed, but i don't think high temperature itself would lead to alcohol without the levain also being out of food. does that make sense?

I just went and had a big whiff.. and you know what its not alcohol its kinda sour vinegary.

But since I fed it the smell has died down by quite a lot just a very small tinge remains so maybe its fine? I've just popped it in the fridge as it has doubled in size and I don't need to use for a while (I think this is the right time to pop it in fridge from what I read).

I suppose this still doesn't explain why my levain had the same smell and the bread has the flavour? This may sound really silly but is sour dough bread maybe supposed to taste slightly of vinegar haha? I've not really had it much before so maybe its normal and I just caught the levain at a bad time or messed it up slightly.

Here's a ref photo of my starter after an hour of feeding it.. 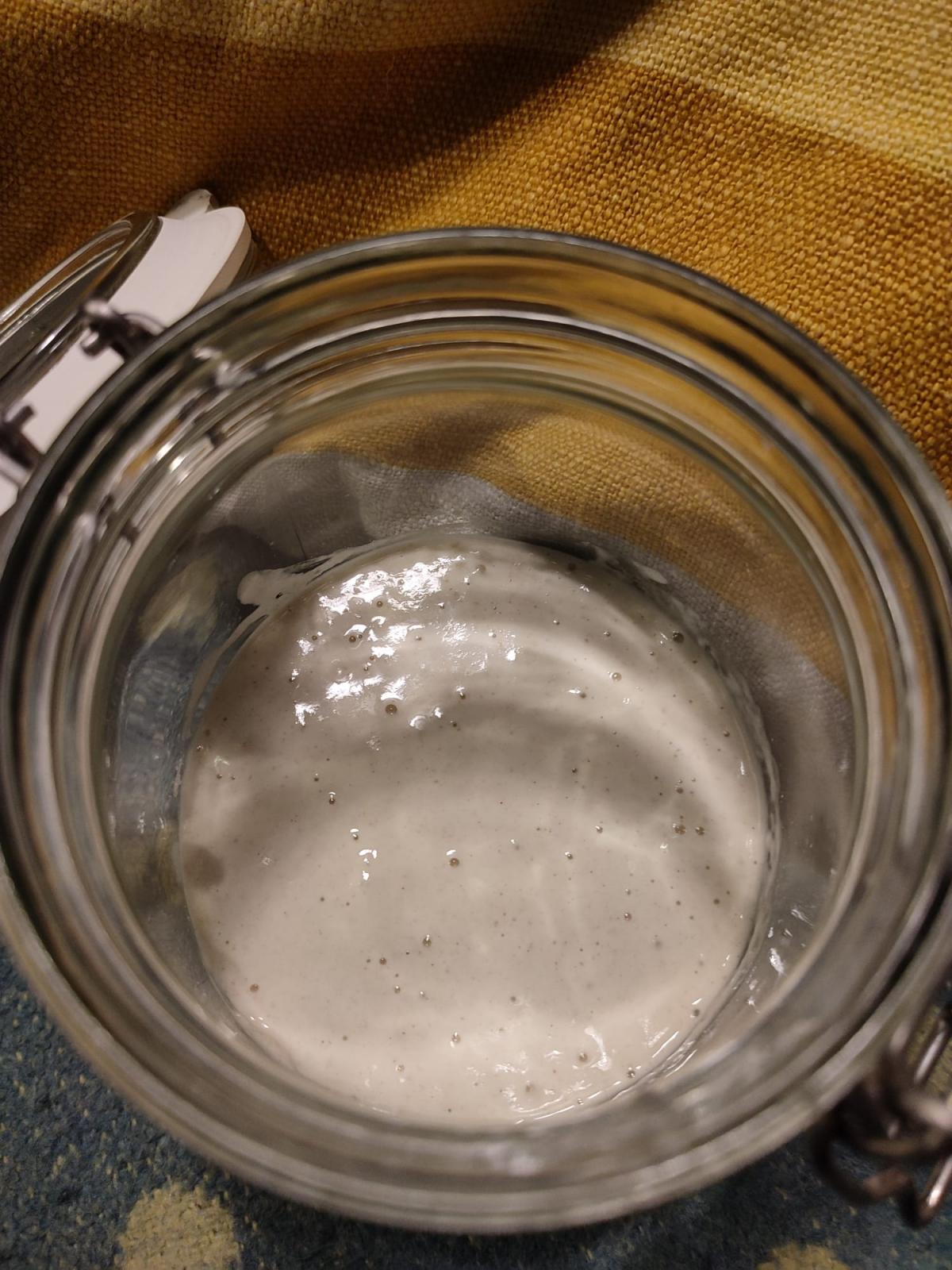 my starter only smells of alcohol when it has exhausted its food supply and is neglected and sad. so, i've only had that happen *after* it had already peaked and fallen back down, and in practice i've only smelled alcohol many hours after it had peaked and fallen. that said, i've never started a starter from scratch, i got mine fully mature from a friend. i've never  had baked bread taste of alcohol and that would be concerning to me...

it's not clear to me from your description whether you used your levain before it peaked, after it peaked, or if you're not sure. "at peak" and "doubled" are not usually the same (e.g., mine is usually triple or more in volume at peak). i think you always want to use a levain at or before peak. i keep track of when mine peaks, not when it doubles, because peaking is a sign that the yeast population is starting to max out and it's time for more food. adding the levain to the dough effectively gives it (a lot) more food.

i'm sorry i can't give much advice on what's going on with your starter. a lot of other folks on this forum *have* started their own starters from scratch and they give quite good advice to others. you might want to try starting a separate thread on that, where you give all the details of how you started your starter, how long ago, how/what you feed it and the timings, etc. then knowledgable folks will probably jump in with help.

Thanks again for replying - its a hard smell to describe maybe its not quite alcohol.  My main starter actually has the same smell at the moment too that the bread tastes sightly of I just gave it a whiff - I've fed it and its helped a little bit but it hasn't gone completely I wonder if I am leaving too much of the starter in the jar along with not feeding it enough. But then I think well I've fed it surely the smell should go even if its for a little while? Bit confused.

For ref I had around 200g of main starter today when I fed it.. took out 100g and added 60 each of flour\water. But it still has that alcohol like smell at the moment as is beginning to grow in size as it feeds..

No I'm not sure if I used the levain before or after peak I just thought to myself its doubled and its been 12 hours. There was no point on the jar I could see where it had dropped and fell so maybe it was still growing. It had 30g of starter with 60g each of water\flour for ref. Whats odd though is if it hadn't peaked why did it smell of that alcohol smell as it couldn't be hungry?

Or you know what, maybe the starter is still too young to use? Its 7 days old it doubles in size when I feed it but no more. Or maybe I should dump it and start again but the fact that the bread has risen makes me thing it must be working of sorts!

Edit: Just replied above I think its more of a vinegar smell than an alcohol one.

i'd start a separate thread to get targeted advice about how to help improve your starter. i agree that it is good it could rise your dough, but a starter can be sub-optimal and still make bread :). describe the smells as best you can and folks will definitely chime in eventually to help. you shouldn't give up on it and dump it, i wouldn't think. there are many ways to fix a wayward starter :)

but, to me, it sounds like you are under-feeding your starter, or it is just not ready yet. it's convenient to talk about feeds as a ratio: 1:1:1 would be 1 part starter to 1 part flour to 1 part water (all by weight). if you fed 100g starter with 60g each of flour and water you're only doing a 1:0.6:0.6 feed. i think at the warm temps you mentioned for your dough (22C?) you should be using 1:2:2 or higher, for feeding every 12 hours. it's not uncommon for folks to recommend feeds of 1:5:5 or 1:10:10, but that's for mature starters. when the starter is still developing, you don't want to over-feed, but that's why i think you might need more starter-targeted advice.

Yes you are right thanks, doh! It doesn't explain the levain problem but I am defo under feeding the main starter eh.

Tomorrow I'll take it out the fridge and make sure I do a 1:2:2 and see if that helps with the vinegar smell. Then try and bake again in a week once we've eaten this vinegar loaf haha! Honestly its just the smallest tinge of vinegar so its edible.

Thanks so much for your help again.

well, if it is a vinegar smell, then i wouldn’t be alarmed, but you can still work on the flavor until it suits you. vinegar is acetic acid, i definitely sometimes taste a bit of it in my loaves. more common (maybe?) is to find a yogurt-y sour smell, that’s lactic acid. a starter and a sourdough loaf can have either/both. some prefer one or the other to dominate, or you can make sourdough bread that doesn’t taste sour at all.

searching for something like acetic vs lactic acid on this site will get you deep, rich information; maybe even overwhelmingly so! i learned a lot of microbiology reading those threads, but they mostly gave me an appreciation for how much more there is to understand 😆.

giving your starter bigger feeds and maybe watching its behavior and noting if it’s doubling or more when it peaks and how long it takes, etc, will give you good info to come back with if you want more help.

hope you enjoy that first loaf! the journey begins :)

Thanks again - I will run a search today on "acetic vs lactic acid" and make some notes and work harder on monitoring starter\correct feed amounts.

It can take a month or so for your sourdough to settle in. Over time it will become more predictable and the flavor may evolve as well.

Thanks for the response - I did wonder if because its so new things may change later. I've just posted a new post about the starter feeding\schedule. But the stronger smell has settled down quite a lot now I am feeding it more.

It kind of smells like yeasty cheap wine now (a quick google says this is normal).