A couple weeks ago when the mesquite pods started to drop in my neighborhood, I was reminded of something I’ve wanted to do for a long time — bake with mesquite flour! I didn’t want to deal with milling them myself, so I found some Texas-grown mesquite flour online and ordered it. It was pricey, but I’m fine paying extra to support a local-ish small producer.

The first thing I made was buttermilk biscuits with 1/2 mesquite flour. It was an instant hit with my family — the flavor and aroma of the flour is unreal! If I had to describe it, it tastes like fall — it’s almost like roasted nuts with the seasoning of pumpkin spice (without the pumpkin).

Even though it doesn’t feel like fall yet, I figured a couple days after the equinox would be a good time to try a sourdough with the flour — something I’d been wanting to try.

Because I wanted to highlight the mesquite more than anything else, I kept it simple — 15% mesquite, 15% local whole wheat, 70% AP flour, 2% salt, 75% hydration. I prefermented 9% of the flour overnight — all of it whole wheat.

I’m incredibly happy with the result! The crumb texture is excellent, the crust is thin and crispy, and the flavor is incredible — it’s very unique! It’s sweet with a strong flavor of what I can only compare to roasted hazelnut and cinnamon and a little bit of mild, lactic tang on the finish. It’s not excessively sweet, so it’s excellent with both savory and sweet stuff. 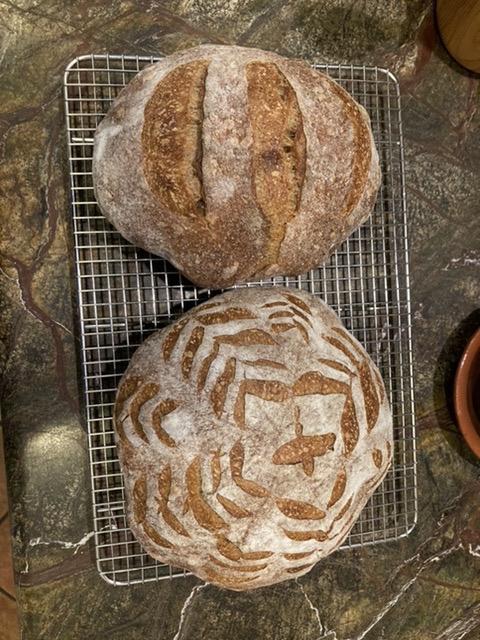 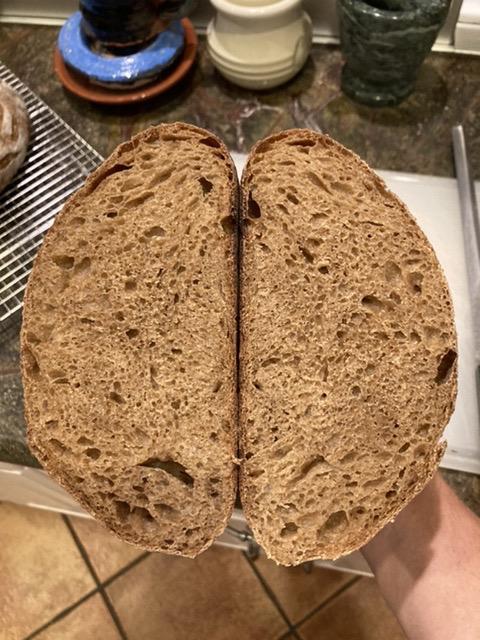 I would say this is is one of the best breads I’ve done. Everything came out exactly as I hoped it would. I’m definitely gonna put this on the menu for thanksgiving this year!

I was surprised not to see more on this website about baking with mesquite. I’ve only done two bakes and I’m absolutely sold on the flavor. When you combine the flavor, the fact that it’s a local ingredient, and the fact that it handles alright (given that it’s gluten free), it’s definitely skyrocketed to the top of my ingredient list. The only downside is the price, but if I’m only baking with it occasionally, it’s not too bad.

Has anyone else here done anything with mesquite flour? Any tips/tricks/suggestions?

I am from Texas (wrong part though, more pines than mesquites) but have not heard of mesquite flour before. Did you get it from Cappadona Ranch?

By the way, the flour I think is underrated is ragi (finger millet), which is available at Indian stores. I like to add some to a hearth loaf along with some dried fruits. It gives a good flavor and beautiful dark color.

That is where I got it from. It’s good stuff! I specifically wanted honey mesquite flour but it seems like most of what’s out there is from the South American mesquites.

Mesquites are not overly common here like in some parts of the state, but there are a fair number in my neighborhood. One of them is big and is a stunning tree — two stories tall with a trunk over a foot in diameter and a canopy that casts light shade all over the front yard of that house. Definitely stands out from the dense cedars and oaks that most other houses have!

I’ll definitely have to try out that ragi flour! I love experimenting with different flours. It’s a lot of fun. I made a sourdough with some teff a while back that was very nice, too.

And some of the jam and “coffee” at the same time. People seem to really like them.

Did the biscuits rise well? I make buttermilk biscuits from time to time but haven’t tried experimenting with them much.

I don’t do many biscuits either. I like them and they’re generally easy, but I tend to put most of my baking efforts into sourdough breads. I thought to do biscuits because the lack of gluten in the mesquite would counter the gluten in the KA AP flour I had to get a better texture — and they come together quick. They did come out great.

I didn’t try anything other than the flour. I wouldn’t be surprised if I liked some of the other stuff, though!

I have two grinding attachments for my kitchen aid. If the tree is there and you like the expensive flour...

I’ve kind of wanted to mill my own flour, but it does seem like a lot of work! Mesquite flour is so pricey it might be worth it, though. Unfortunately, this year wouldn’t have been good for making it — we had a lot of rain right as the pods were ripening, which makes them prone to molding. I’m also not exactly enamored with the idea of standing in a big, thorny tree on a ladder to grab pods!

I’m super happy with how this bake came out. I’ve been playing every now and again with more decorative scoring, so it’s not quite symmetrical like I want, but I’m still happy with it!

I never heard of this flour before.  I’ve used mesquite wood chips for smoking but never knew about making flour from the trees pods.  Very nice looking bake and I’m intrigued by the flavor profile.
Best,

but it took me til now to try it. They apparently were a major food source. Different trees have different flavors, too — just having nibbled on pods around the neighborhood, some are a lot better than others.

I’ve always appreciated mesquite trees because they have a nice form (when they haven’t gotten knocked back over and over into shrubs), they cast lovely dappled shade, they are extremely tough, and the wood is nice (both for woodworking and barbecue!) I like them even more now that I know they taste so good.

I always find a couple things to nitpick with every bread I make, but I was very happy with this one! I do love the flavor!— it’s very special.

With prices that are merely high, rather than eye-wateringly high:

I’ve not dealt with this vendor, so can’t offer any insights about their operation.

I don’t know if it makes a difference, but they claim to grind the whole pod, not just the seeds.

I got the mesquite flour a while back but didn’t get around to using it in bread. I have been enjoying the “mesquite coffee” though.

Even the raw dough smells great. Looking forward to seeing how these loaves turn out.

While steaming the oven, so my second loaf had to be discarded.

But the first one looks pretty good and smells great. I’m no good at producing ears, so can’t blame the mesquite flour for the lack of one. 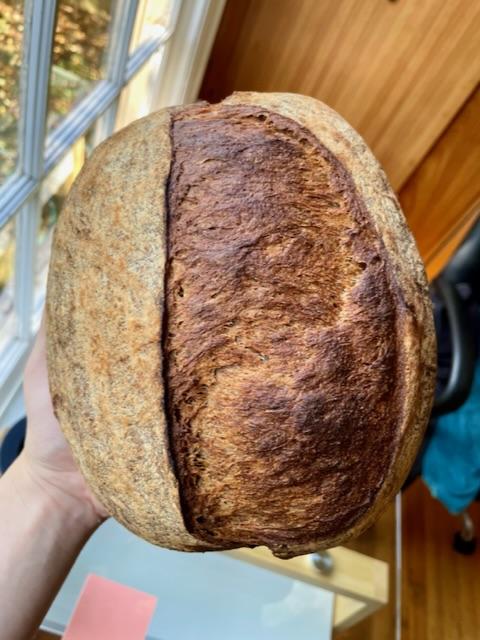 hit it with some water spray? The loaf looks excellent, you've inspired me to order some mesquite flour!

hit it with some water, or maybe the giant wave of steam was enough to take it out. Recently started using lava rocks and stupidly had the pan on the same side as the light. Won't be doing that again.

I don't think you'll be disappointed with the mesquite flour. I'll definitely be doing more experiments with it.