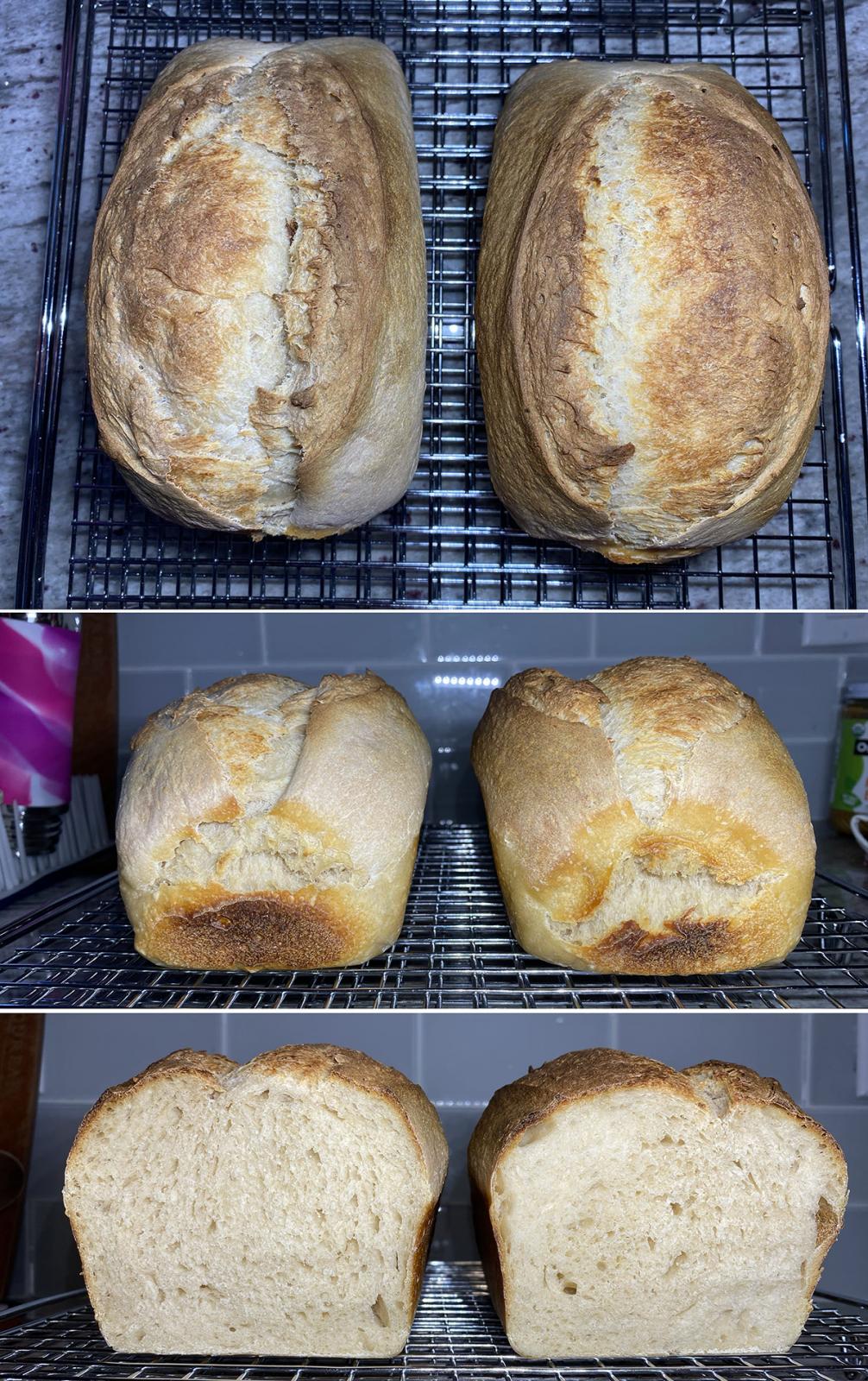 I've attempted this recipe for Sourdough Milk Bread a few times and I'm not quite sure where it's going wrong. It seems they are always bursting out of the middle and sides, and the crust is way too hard. I couldn't figure out if I was under proofing or over proofing, so I left the right side dough for 3 hours longer in the final rise - doesn't seem that much different though. I have a WW starter at 100% hydration that generally takes longer to double, 6-8hrs, so I figured leaving longer for the final rise made sense since they were not really doubling in the pan... I also used a different shaping method that I saw on a youtube video - is it possible the problem was in the shaping??

Also any tips on how to make the bread taste less sour? I tried taking starter out of fridge a few days early and feeding at 1:2:2 (starter, flour, water) twice a day. That seemed to help the last time I made this bread but this time it was still very sour which I'm guessing is bc the final rise went too long?

The recipe I used is below (https://www.butterforall.com/traditional-cooking-traditional-living/sourdough-milk-bread/) and I did the following things differently:

- added a pan of water to steam during bake

Aside from that, the only thing I can think of is that the crust is setting too soon - how are you steaming? Is this a convection oven and if it is, can you turn the fan off?

Yes, I'm measuring by weight. I say stiff but maybe I'm not experienced enough to say what's normal or not... I technically can stretch and fold but it doesn't stretch as much as I think it should (based on videos I'm seeing). But that said, can kneading and s&f techniques be used interchangeably/do they affect the dough differently?

I put a pan of water on the bottom rack while it preheats and leave it in there while the bread is baking... It is a convection oven but I don't use the convection function - but it's interesting because I had noticed it does seem like the fan still runs... Maybe this is the problem so I will have to investigate that. Thank you!

was lacking judging by the dull crust and the bursting problems. The extra sour could be coming from the WW starter especially if it was used after it peaked. I don’t know what sizes your loaf pans are but it doesn’t look like the recipe makes enough for two 9x5 loaf pans.

These were 8.5 x 4.5 loaf pans so I'm in trouble if the recipe wasn't enough for those!

I did spritz a little more water than called for because I thought it would help the crust not be so hard and brown. That's a good point about the starter, I will have to watch the rise more carefully. Were you saying that a WW starter is likely to be more sour than AP anyway (even if used before peak)?

Yes, whole grain starters are generally more sour than white flour starters. if you wanted less sour you should try building your levain with the same white flour that is used in your recipe rather than a 100% WW starter added to the mix.