I used 20 grams of ground red rye crystal malt for 350 g total flour, which gave a good malty taste, but perhaps a tad too much.  Next time I'll back it off to 5%.

Inspired by other rye formulas, notably Ilya's, this time, immediately prior to baking,  I painted the top of the loaf with a mix of 6:5 ratio of water to dough.  Then after baking, I brushed on a thin layer of a gelatinized mixture taken from a small batch of about 1 tsp corn starch in 1/4 cup water. (I only used a tiny fraction.)

Othe ingredients, mixed together and added as a whole to above:

The only difference from the previous loaf  I can think of that made it require 14 more minutes of bake time is painting the top with water+dough. 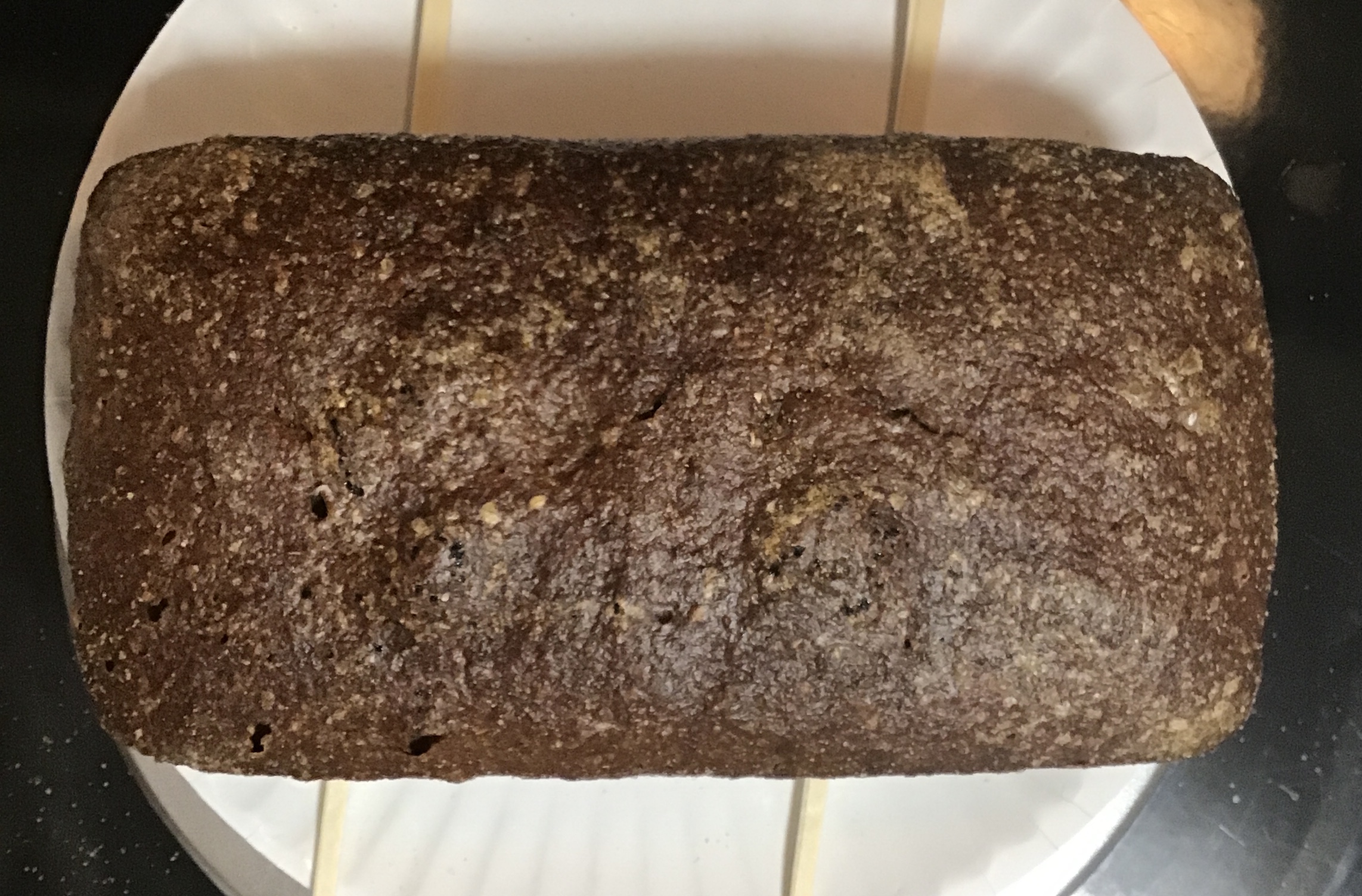 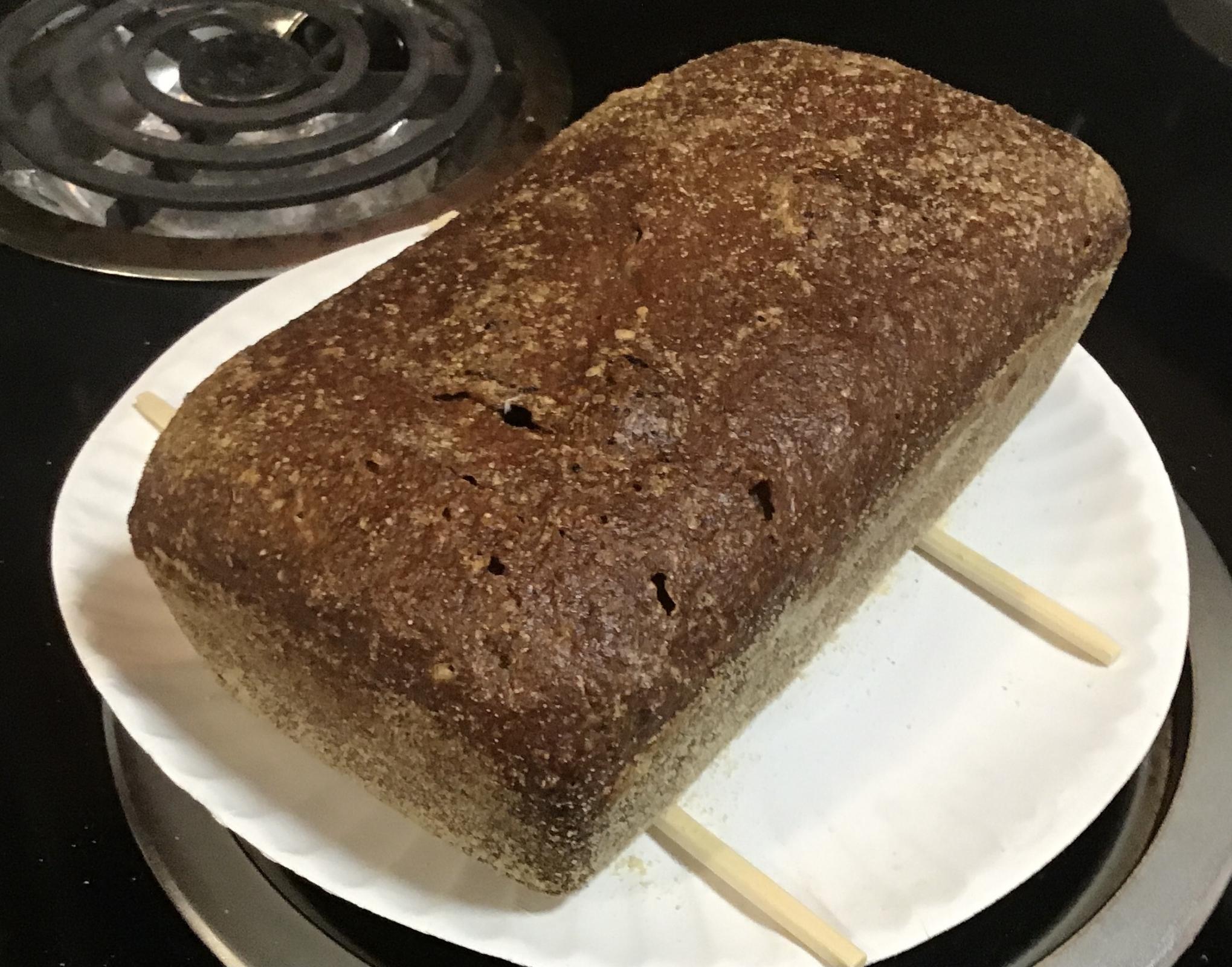 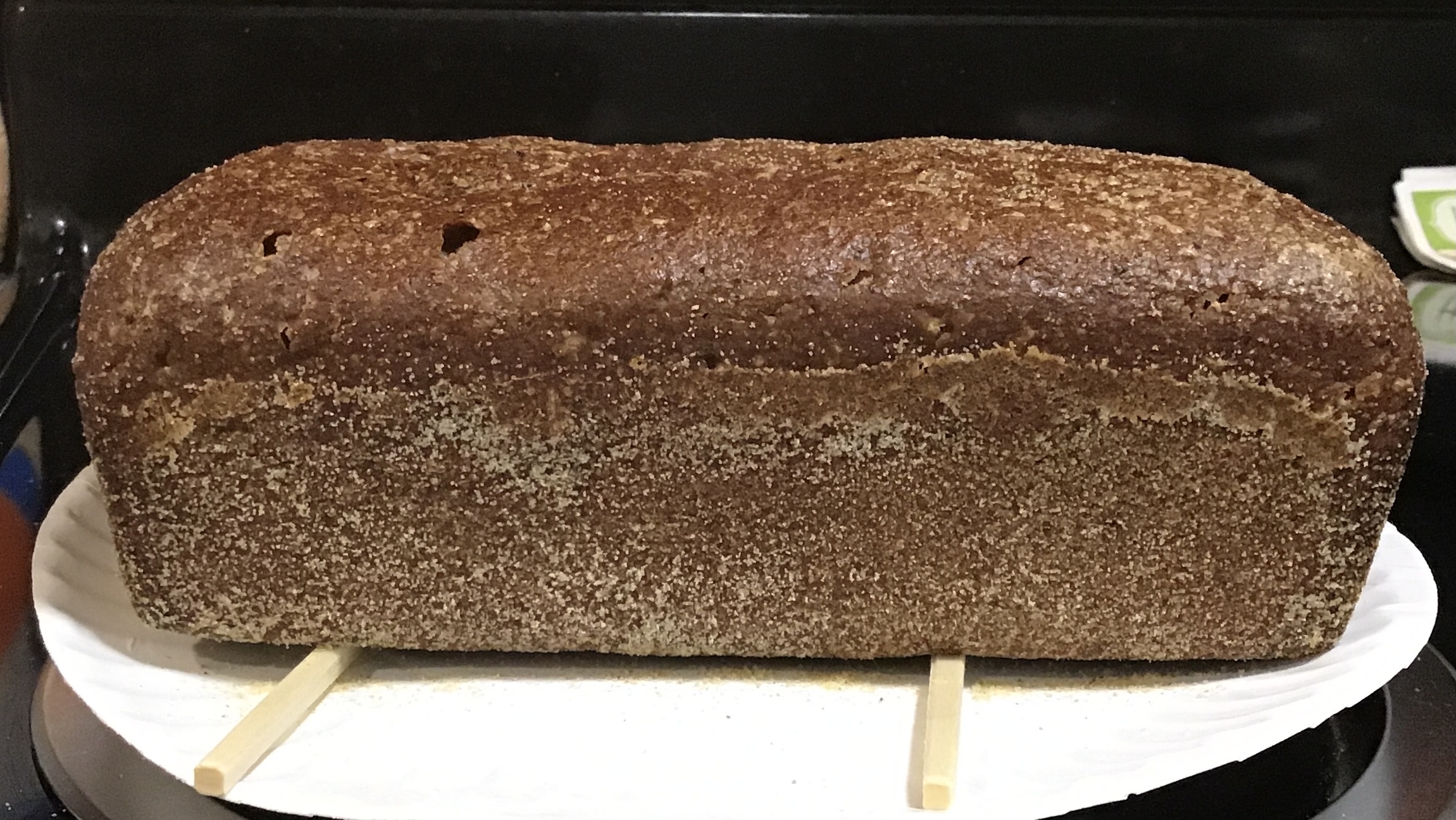 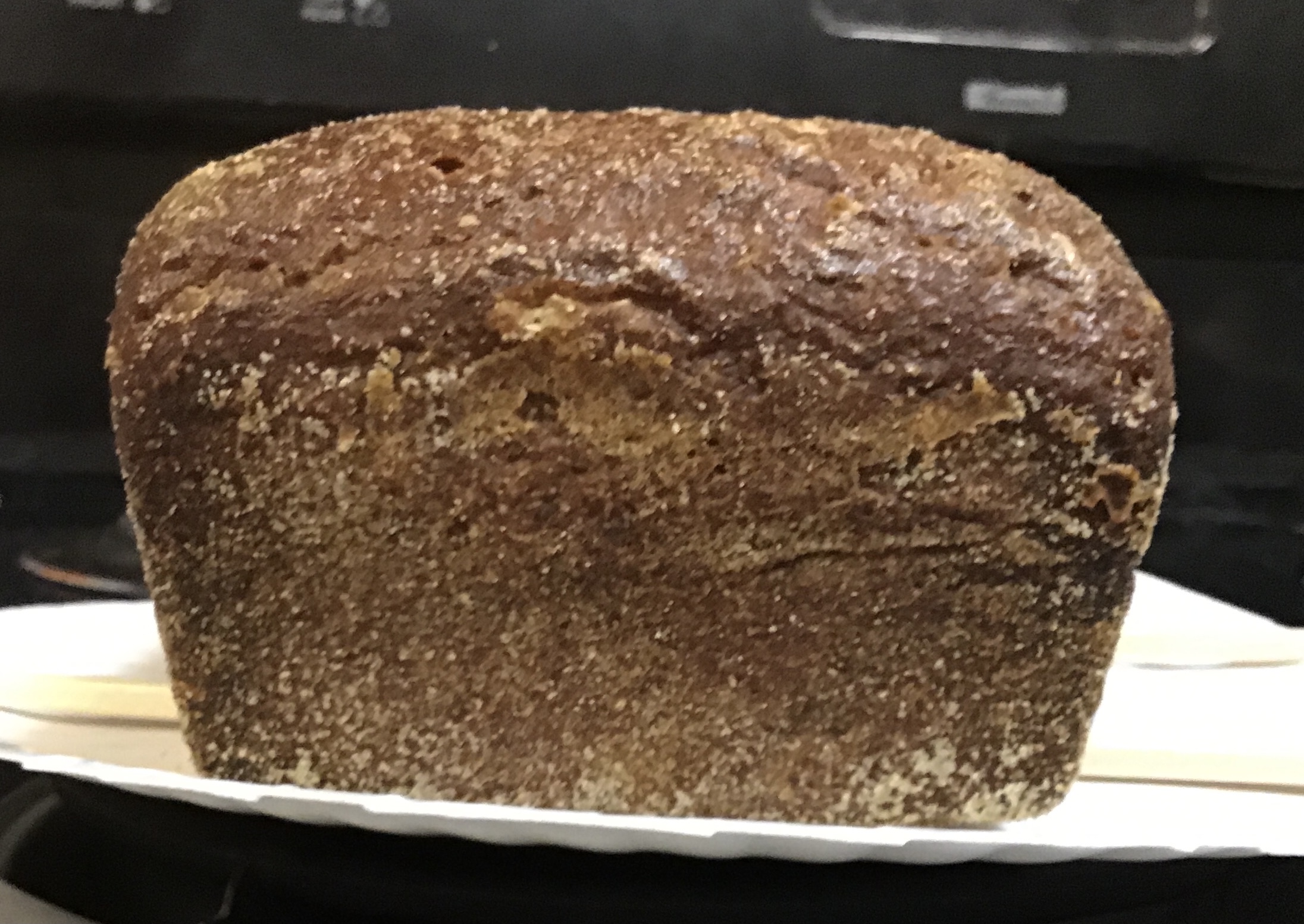 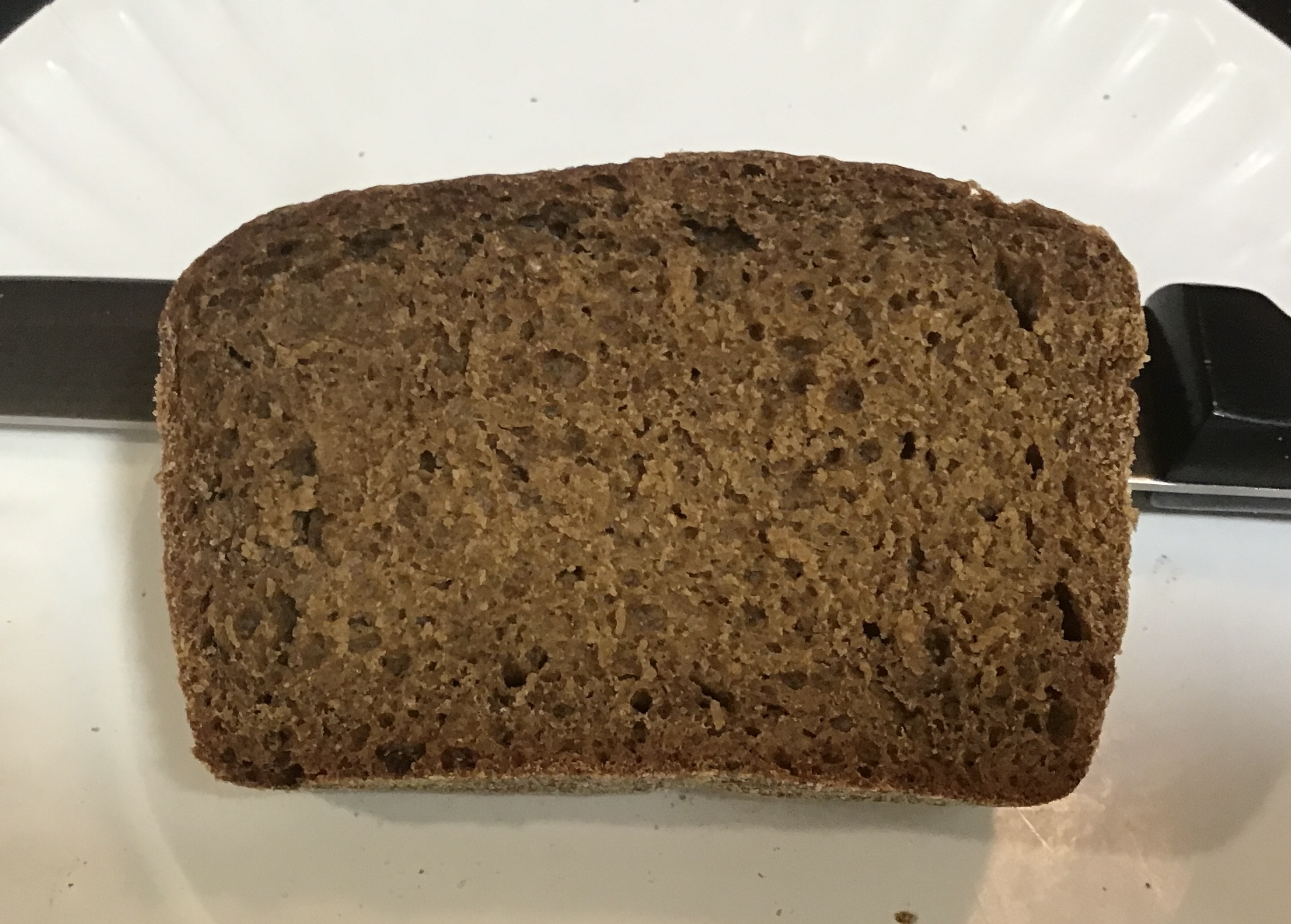 I originally got it from Hanseata. She used 1 part fennel, 1 part caraway, 2 parts coriander. Toasted first, then cooled, then ground. I split the fennel into 1/2 anise, 1/2 fennel.

Looks great Dave!  You’ve been nailing the rye bakes.  The color on that crumb just looks like it should have some chocolate tones in the flavor.  Looks like it would make the perfect grilled sandwich!

This one does have a nice malty aroma and flavor, but it is not sweet, so it begs a sweet topping such as jam, or else a savory meat/cheese topping.

This bread, #99, goes well microwaved with butter.  My toaster oven doesn't toast well, but I tried, and didn't get it sliced thin enough, so one edge burned while the inner center was still moist. I'll try with a regular toaster.

My favorite taste in this general formula series of bakes was #97, https://www.thefreshloaf.com/node/70913/97th-bake-08062022-ww-rye-bf-starter-idy
which had a seed topping and ground flax/chia in the dough, no malt.  The only negative of #97 was it dried out too quickly, which I think was because I didn't allow enough water to hydrate the flax/chia, which takes up to 3 times it's weight in water.

I need to get more whole flax, and get some more poppy seeds for the toppings.

I think I'm going to save the malt for the mostly-rye loaves, and 100% rye loaves.

I may also play around by adding the chocolate-y rye malt and red rye crystal malt to Denisa's 100% whole rye recipe.

But I still feel there's a Borodinsky out there calling my name. I've got some pre-WWI Jewish ancestors from Russia.

I’ll have to take a look at #97.  Planned to do some whole grain pan loaves next, so I’ll see if I can replicate it.  I think I have all those ingredients.

If you want a sidetrack, this is my favorite rye that I’ve made so far.  I think it could easily be done with a rye starter instead of the sour YW or LAS.  I’ve made it 3 times and it has that mild chocolate tone (to me at least) each time.  I planned to revisit it with a rye starter that I’m building.  Will put it on hold and try #97 first. 👍

That's a nice looking rye loaf, have you tried including a scald yet? And I really recommend getting some red rye malt, it's really in a different class compared to crystal rye. If you want to go down the Borodinsky route, it make a difference!

And glad to be an inspiration to you, these techniques came to me primarily from Rus Brot!

Start the drumroll for #💯 Ready the trumpets 🎺🎺🎺 The world awaits with baited malt breath for the cumulative results of 99 rounds of practice all leading up to what most assuredly will be something incredible to behold. The Centennial Loaf!
No pressure, you got this, Good luck!