One of our closest friends are vegan so it is a fun challenge to have them over for dinner.  I still have frozen rhubarb from another friend who lives in the countryside so decided that the sour cherry rhubarb combination was so good it needed to be repeated, but this time without my all butter crust.

Following Rose Beranbaum’s vegetable shortening recipe in her book I made a shortening based crust.  I much prefer the flavour of butter to shortening’s lack of flavour, but shortening has some positive attributes as well.  It is softer at fridge temperature so starts to roll out extremely well right out of the fridge.  It also doesn’t melt on you as easily as you roll it out and handle the dough.  It browns more quickly than butter based pastry which is a positive or a negative as long as you are aware of this.  Despite shielding the edge of the crust after it was par-baked, fill and topped it still ended up more brown with slight bitterness I associate with over baked crust edge.  In the future, I’d shield it even soon maybe even right from the start of par-baking.  Finally it can make a flaky crust if you give the dough enough folds, but it easily is much more tender than an all butter crust.

Final note to self, when pre-cooking the filling there is no need to fully heat and fully thicken it.  I would probably just cook until it just starts to thicken and leave it loose as it will fully cook in the oven in the pie.

I added some almond extract to the filling along with lemon juice, both these additions really enhanced the pie.  As you know almond and cherry go extremely well together so a bit of almond extract just makes the cherry sing without making itself been known.  Lemon juice is almost always a positive from making fruit pies sing that that is no different there. 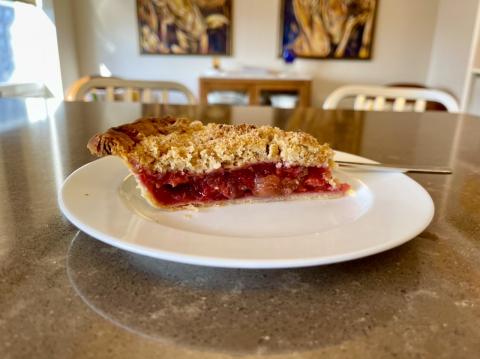 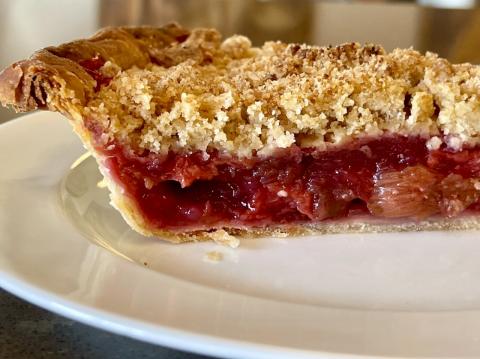 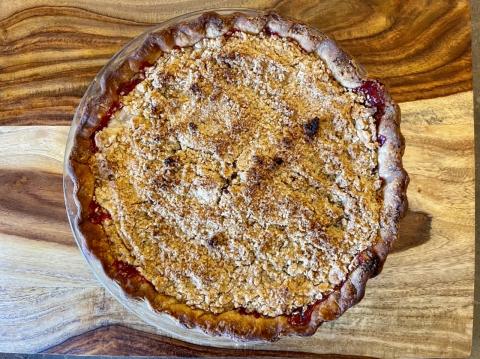 I don't know that I have ever tasted Rhubarb before, but this looks fantastic.  I'm sure your friend will love it.

Wait Ian, you’ve never tasted rhubarb?  It is just the best vegetable you can use in a dessert pie, you need to find yourself some to try.  Really tangy sour flavour that compliments so many other fruits.  Thus far I’m made strawberry, sour cheery, raspberry and blueberry with rhubarb and all have been delicious.

You know I love rhubarb any shape or fashion. We were in Poland and attended a family birthday party. Everyone was served a chilled sweetened rhubarb compote in a crystal glass. It was so delicious and surprising. Beautiful color and some texture but not too chunky. I don’t recall a spoon … it was 1989 but it was memorably delicious.

your pies are always exquisite

Thanks so much Caroline, kind of you to say.  I love all things rhubarb and usually make more filling that needed when I make a pie.  That extra filling is amazing on bread, ice cream, yogurt you name it.

Understand your concern with the bitterness of the edge crust, but this pie just reminds me of Grandma's house during the holidays.  She always used vegetable shortening in her crusts and the edges were commonly dark brown.  That was just extra flavor!  It looks like a great pie to me.  :-)

Great versatility in your baking and kudos to you for going outside your comfort zone to accommodate a guest.  I'm sure they loved it!

Thank you Troy, it is always fun trying different things so preparing a vegan meal for friends was nice to do.

My mom baked two pies every Sunday for as long as I can remember and always made a vegetable shortening crust. The edges, as Hei-Hei says, were frequently well browned. We kids used to break pieces off the edges and "taste-test" them while the pie was cooling - until we got caught at it and were swatted away 🤣. Everyone loved the browned edges! All the pies were great, but I think most of us would choose strawberry rhubarb as our particular favorite.

Caroline's mention of rhubarb compote also brought to mind a rhubarb sauce that my mom and grandma (who was from a part of Germany that is now Poland) used to make. We ate it with a spoon, but no reason why we couldn't have drunk it. The portion sizes were very small, probably because it was so acidic that the surface of one's teeth felt a little rough for a while after eating it. I haven't thought of that rhubarb sauce in a while. I wonder if I would enjoy it as much today as I did then...

Your pie looks amazing, thank you for posting it.

All you folks who had parents or grandparents who baked were so lucky, it wasn’t part of our lives as kids.  It is nice to hear that other bakers using vegetable shortening for pies also have the issue of the browning of the edge and that it wasn’t just me.  I’ve had rhubarb compote but when I’ve had it, it wasn’t super tart.  What you’re describing actually sounds good to me, I like tart/sour things and can drink vinegar!  Thanks for the compliment on the pie AG.

I continue to make them just the way they did. Always a lard crust. I order my leaf lard in 5# packages from two women on Etsy . They are wonderful and have a huge following . We pinched off pieces of crust when I was a little girl. My Mom also gave me extra trimmings from the crust to roll out on a chair seat. I had my own rolling pin and small pans She called them daub pies...that is what her Mother called it. You put milk and sugar and flour together in the crust  and daubed it with your fingers to blend and she would bake it with her pie. It was like a custard. What great memories. My three kids always asked for anything with crust. I used to make pot pies all the time from the chicken backs that I would save in the freezer when I cut up whole chickens. I make just a big top crust and baked it till bubbling. I also always made apple pie everyone's favorite. The kids would pinch off crust till it looked as if a rat had been after the pie !! My daughter makes pot pie all the time but doesn't make the crust from scratch as time is very short when you have two littles and 3 jobs. My eldest son is a chef and he makes pot pies for his fraternity and they love it . He of course could make a homemade crust but doesn't as time is also short. My Mom and grandmother took old sheets and tore them in strips and that is what you use to wrap the pie so that the crust doesn't overbrown. You dampen it very slightly and wrap it around the whole crust edge and then bake the pie. When you peel off the cloth the crust will be perfect every time. I wish I had my Mom's cloths...they were in a jar but I don't know what happened to them.

Wonderful memories you have Caroline, so lovely to have those cherished things to have shared with your mother that you’ve passed on to your kids.  Interesting tip about the damp cloth, I hadn’t heard of that for shielding the edge.  I have a silicone pie edge shield but for shortening crusts I’ll have to put it in place much earlier than I would for butter crusts.

Thank you Paul that is kind of you to say.  It was scrumptious!

A nice way to enjoy the fresh fruit season. Your pie evoked a lot of fond memories from the patrons. Nice work. Don’t leave it on the window sill to cool they have been known to disappear.
D

Thank you Don, we love a good fruit pie, not much that is better this time of year.