I’m joining my partner in Newfoundland to visit his family there. Working from home I was able to squeeze in a bake so I could bring some bread with me. Since my dinner guests all seem to have enjoyed my brioche, I decided to bake a 50% WW SD Brioche, but this time with the addition of dark chocolate chips to make it a bit more decadent.

I’d love your opinion on something, based on how this baked up with the tearing between the lobes I’d say that this is under fermented. However, going by the finger poke test, you can see in the photo of the pre-baked dough the indentation that remained even after several minutes making me decide it was time to bake. Although I’m sure this will taste great, I don’t love the look of that tearing. What do you think, under fermented?  I’ll be able to post a crumb photo tomorrow. For a 9”x4”x4” pan
70 g dark chocolate chips
Levain
Mix the levain ingredients in a jar or pyrex container with space for at least 300% growth.
Press down with your knuckles to create a uniform surface and to push out air.
At a temperature of 78ºF, it typically takes up to 10-12 hours for this sweet stiff levain to be at peak.

Dough
In the bowl of a stand mixer, add the milk, eggs, salt, sugar and levain. Mix and then break up the levain into smaller pieces. Next add the flours. Mix on low speed until there is no dry flour remaining. Once incorporated increase the speed gradually to medium. Mix at medium until the gluten is moderately developed. With the mixer running add the room temperature butter one pat at a time until it is fully incorporated, waiting until each pat is well incorporated before adding the next. Continue to mix until you can pull a good windowpane, not quite as good as a white flour because the bran will interrupt the windowpane somewhat.

Shape the dough into a tight ball, cover in the bowl and ferment for 3.5-4.5 hours at 82ºF. There should be some rise visible at this stage.
You can next place the dough into the fridge to chill the dough for about 1.5 hours, this makes rolling the dough easier, remember if you do so the final proof will take longer. Alternatively, you can do a cold retard in the fridge overnight.

Prepare your pans by greasing them with butter or line with parchment paper. Scrape the dough out onto a clean counter top. Lightly flour the bench. Transfer the dough onto the bench and divide it into four. Shape each into a roll, allow to rest 5 mins. Next like a baguette, shape each roll into a long log with tapered ends. Next do a 4 strand plait. Tuck the ends underneath and transfer into the prepared pan. Alternatively divide your dough into 8 equally sized small boules, rest, flatten and then add dark chocolate chips (per your taste) then form back into small boules. Place into prepared pan

Cover and let proof for 5-7 hours, longer time if you chilled your dough for shaping. I proof until the top of the dough comes to within 1 cm of the top edge of the pan or the dough passes the finger poke test.

Bake the loaves for 35-40 minutes or until the internal temperature is at least 190ºF, rotating as needed to get even browning. Shield your loaf if it gets brown early in the baking process. After 35-40 mins remove the bread from the pan and bake a further 10 mins by placing the loaf directly in the oven on the rack with the oven turned down to 325ºF. You can brush the top of the loaf with butter if you wish at this point while the bread is still hot to keep the top crust soft. You're too hard on yourself.

Yes I am, but I’m also trying to figure this out and wondered if other bakers agree that it is underfermenting that leads to the tearing between lobes. In my experience it has been the cause when I do plaited challah so I assume the same here.  I was just a tad bit surprised given the results of the finger poke test which by the way were done on warm dough and not cold retarded dough.

Here’s a video I put together on the shaping of this loaf.

At first glance, it appears that the dough balls at the ends of he pan are slightly smaller than those in the center of the pan.  The size difference is already apparent in the proofed dough.

If all balls weighed the same, then I’d posit that the balls in the middle had some other advantage; perhaps they stayed slightly warmer while those at the ends were slightly cooler.

When baked, the balls in the center continued to expand more than those on the ends.  It seems to continue the pattern already established in the final proof.

Thanks for your comments Paul.  Yes I always weight each ball of dough when I do these types of loafs. Each was within 1 g of the others.  Their temperature should not have varied by much, the room temperature was warm ish 76°F yesterday while the proofing box was 82°F.  It is hard to imagine that the balls at the end being cooler than the ones inside while in a warm proofing box.  But something like that

In the end, hard to complain about explosive oven spring, but I think I’ll just need to add yet another 30 of final proof when making this even when the dough passes the poke test.

I suspect trapped air inside the dough balls while shaping.  Also curious if the chips melted together to make a somewhat hard lump of chocolate when cold as in the film, they look bunched together in the middle.  If that is not where a gas pocket might be?

By underfermented, do you mean possibly shaped too soon? Hmmm, the slightly rough baked dough ball surfaces might be evidence of fast fermentation a slight breaking down of tension and ungluing themselves from their neighbors. Perhaps a preshape and slight rise before deflating and adding the chips.  We are talking sourdough.  An IDY dough is probably not so fickel and holds itself together better.  I don't know....  :)

Summer and heat, warm kitchen surfaces, warm hands, all contributing to mess up temp control. The opening of the loaf sure does look inviting.  Don't you just want to tear off a hunk?

I watched the video again and heck!  No idea. Maybe you're right With a longer final proof.

Trapped air is definitely a possibility Mini good thought. I’ll post the crumb later unless it gets torn into at my brother in law’s home. I tried to fold the chips onto the dough when forming the boule but you’re right they maybe more clumped than well distributed. Next time I will try putting some down then folding then placing more in, folding then placing more on to ensure they are layered.

what about these forces of nature?  Could shaping the dough balls "top heavy" on the ends correct this? Interesting observation Mini, perhaps loading the boules inner ones first and then outside ones last could change this. Hmmmmm something to think about. So load the inner four then make space for the end ones.

alternating look, you may have to make the two smaller opposite corners with less dough weight.  That way they can't  do a "push up" maneuver on the inside dough balls.

Edit:  It wouldn't have to be complicated. Just make (lucky) seven balls instead of eight and divide one in half.  Then do the six inner balls in the middle first and the small ones last.  I bet that might work.

Or I can go back to plaiting next time.

It's the balls, Benny. They always do that - tearing and popping out in unsightly ways, forming hanging ears, etc. They are OK in a pullman loaf (baked undercover, so to speak), but if you bake them with an open top, they always do that to you (well, they do that to me, lol).

Generally speaking, there are 7 distinct ways to shape a loaf to obtain an even, soft, decadent crumb, as in toast breads (single logs or even double parallel logs are not as good).

The 5th and the 6th (Us and Ws) give the softest crumb ever, says SAF (they tested it), but they won't be as pretty if you bake them with an open top. 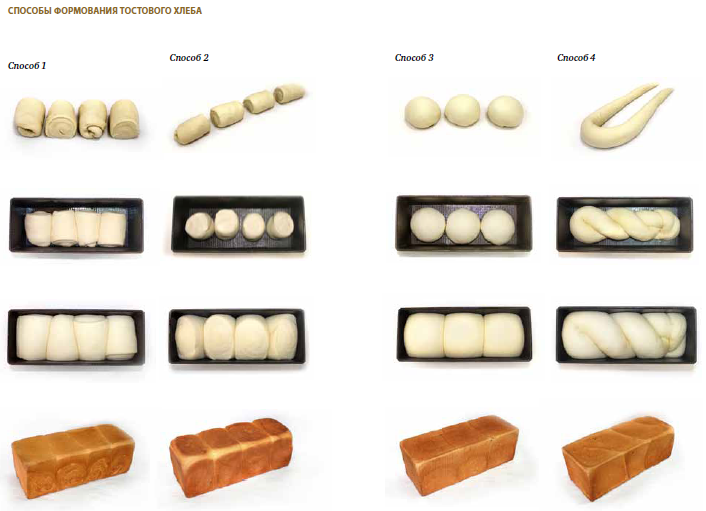 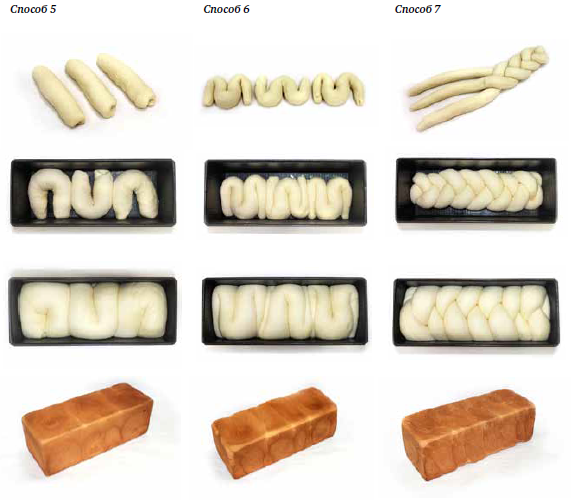 Braiding is the answer, complex or simple braids, it always works. It distributes the tension very well and gives an acceptably soft crumb.

Thank you for that informative post Marianna, very much appreciate.  As someone pointed out on another forum, the dough was still a bit too much for this pan, even though I’ve gradually reduced it with each bake.  There is nothing to hold those boule together once they rise above the edge of the pan so of course it makes sense to grow in the path of least resistance, outwards!

Interesting flavours, and can appreciate the full gamut of whole-wheat pan breads you've been making lately.

Also very interesting discussion here about shaping too. Looking forward to seeing the crumb photo, if there was one.

Thank you Jon, I’ve been enjoying trying different things.  Here’s the crumb.  The family all enjoyed it. The chocolate distribution looks fine and the crumb looks nice and soft.
Beat,

The chocolate distribution looks fine and the crumb looks nice and soft.
Best,

Thank you Ian, I think I’ll add the chocolate chips in aliquots next time each time as I fold the flattened round of dough so that they are even better distributed.  The bread was really fluffy and soft you’re right.

Like a chocolate chip cookie!  I would guess the center balls followed the path of least resistance to get the crown shape. It doesn’t look under proofed to me. I am thinking it would make a great peanut butter and banana sandwich.

I agree Don, it wasn’t under fermented at all and was delicious.  I also agree that the balls were the cause of the shape and that you’re right, they followed the path of least resistance.  I think I’ll add orange/lemon zest next time, a couple of people commented that it was almost like panettone.

as in gugelhupf?  Any kind of donut shaped pan.  The crumb looks great!  Fantasizing about the peanut butter and banana sandwich too, cutting up a decent sandwich into bite size peti fours.  Always got candied and dried fruit in the baking cupboard. Been drying Wachauer apricots. They give such wonderful bursts of flavor. Which I think is nice in this type of dough.

I once made a brioche braid and everything was cut up so tiny the flavours all blended together into one. Every bite the same. Good but not good if you know what I'm getting at.

I have a Bundt pan which would work for a donut shaped loaf.  Yes peanut butter and banana would be yummy, but I have to say I most eat this type of bread plain.  Dried fruit inclusions would be delicious too.