Warm up time required for a "Hot" bake

Warm up time required for a "Hot" bake

For the last 5-10 bakes I've done, I've been doing a modified version of the "turn off your oven" method of baking.  In that method, you preheat your oven to a high temperature (Sune @ Food Geek went to 500 deg F) and then turn off the oven for the entire 20 minutes you're cooking with steam.  You then turn the oven back on after you vent the steam.  Recently, Tom @ The Sourdough Journey posted a video about some of the popular baking methods out there.  For the hot method, you need to preheat the oven for 1 hour.  Here's some observations from today's bake that shows the need for it.  If you don't use this method, it might give you some idea about the temps you're baking at if you don't have a separate probe and are relying on the oven thermostat.

My oven setup...  GE Spectra oven with top/bottom heating elements.  I have a cookie sheet on the bottom rack that serves as both a heat shield for the baking stone and a steam tray.  On the top oven rack, I have a large cookie sheet inverted to serve as a top shield and to hold the steam at the loaf (hopefully).  On the third position from the bottom, I have a 15" x 20" Fibrament baking stone.  In addition, I have a Weber iGrill temperature probe that I use to monitor the temperature at the stone. 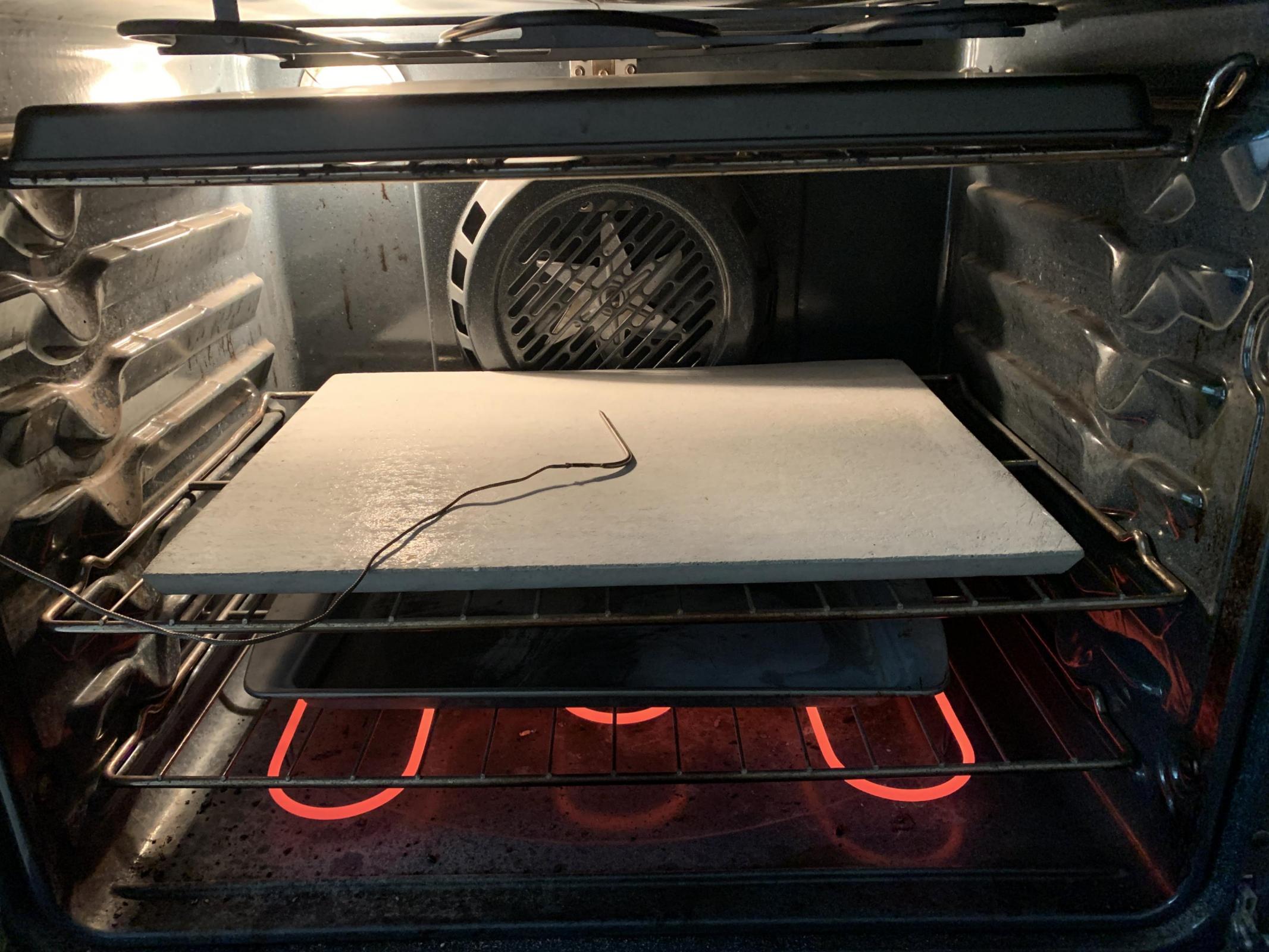 The next series of pictures shows the temp according to the oven and also the temp at the baking stone.  Granted, part of the delay is caused by heating up the large stone, but that's also the case for heating up the oven walls and getting everything good and hot.  The method I've been using...  Preheat oven until stone surface reaches 465 deg F, bake for 1 minute at 465 deg F, drop oven temp to 400 deg F for 19 minutes (which effectively turns it off for about 15 minutes), vent the oven and increase to 425 deg F for 10-20 minutes until loaf has a hollow thump.  As you can see, the oven reached 465 deg F in about 20 minutes, but the stone surface was still only 255 deg F.  It took about exactly 1 hour for the stone surface to get to 465 deg F (I missed the photo by about 3-4 minutes and it overshot a little bit). 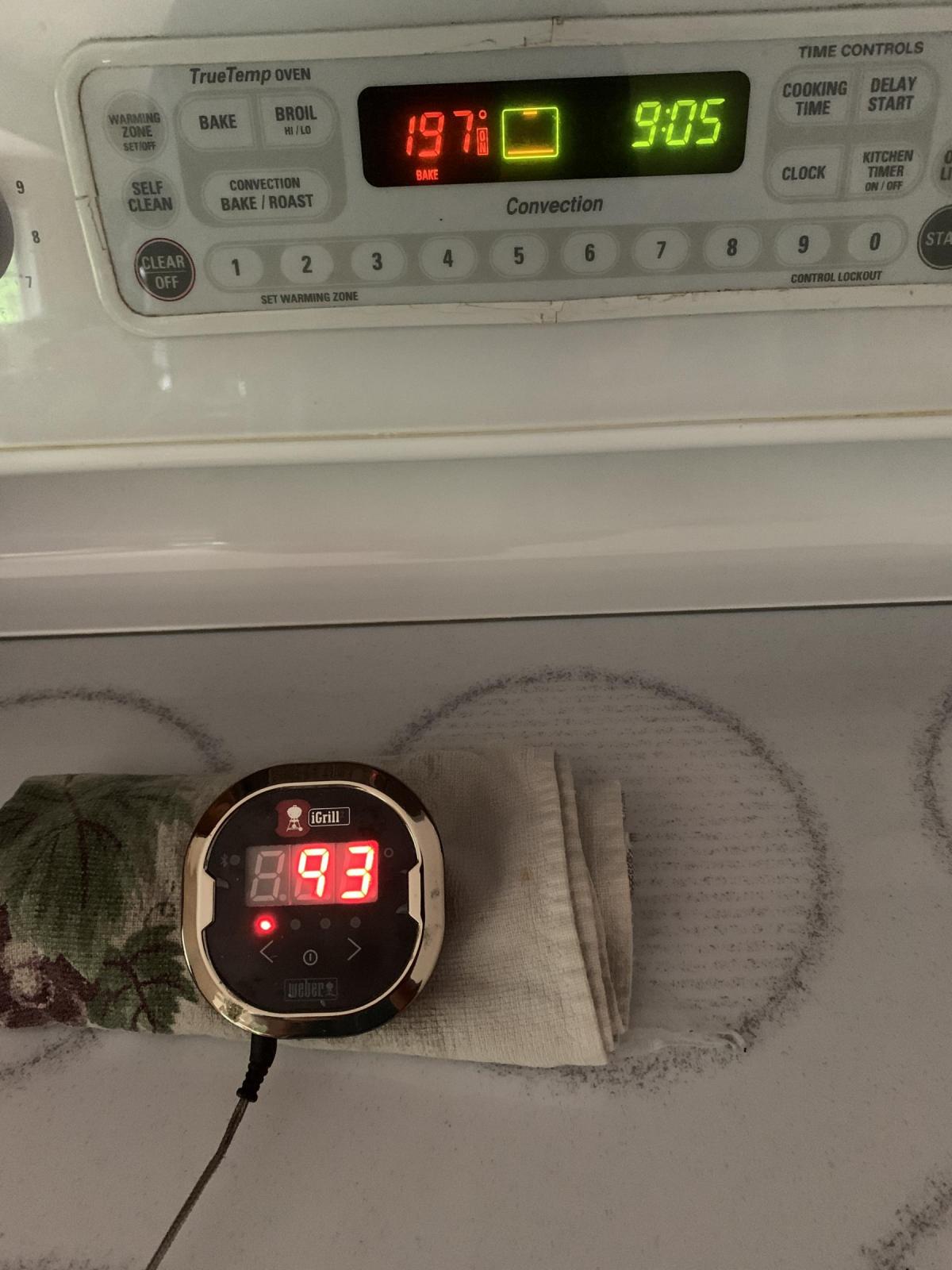 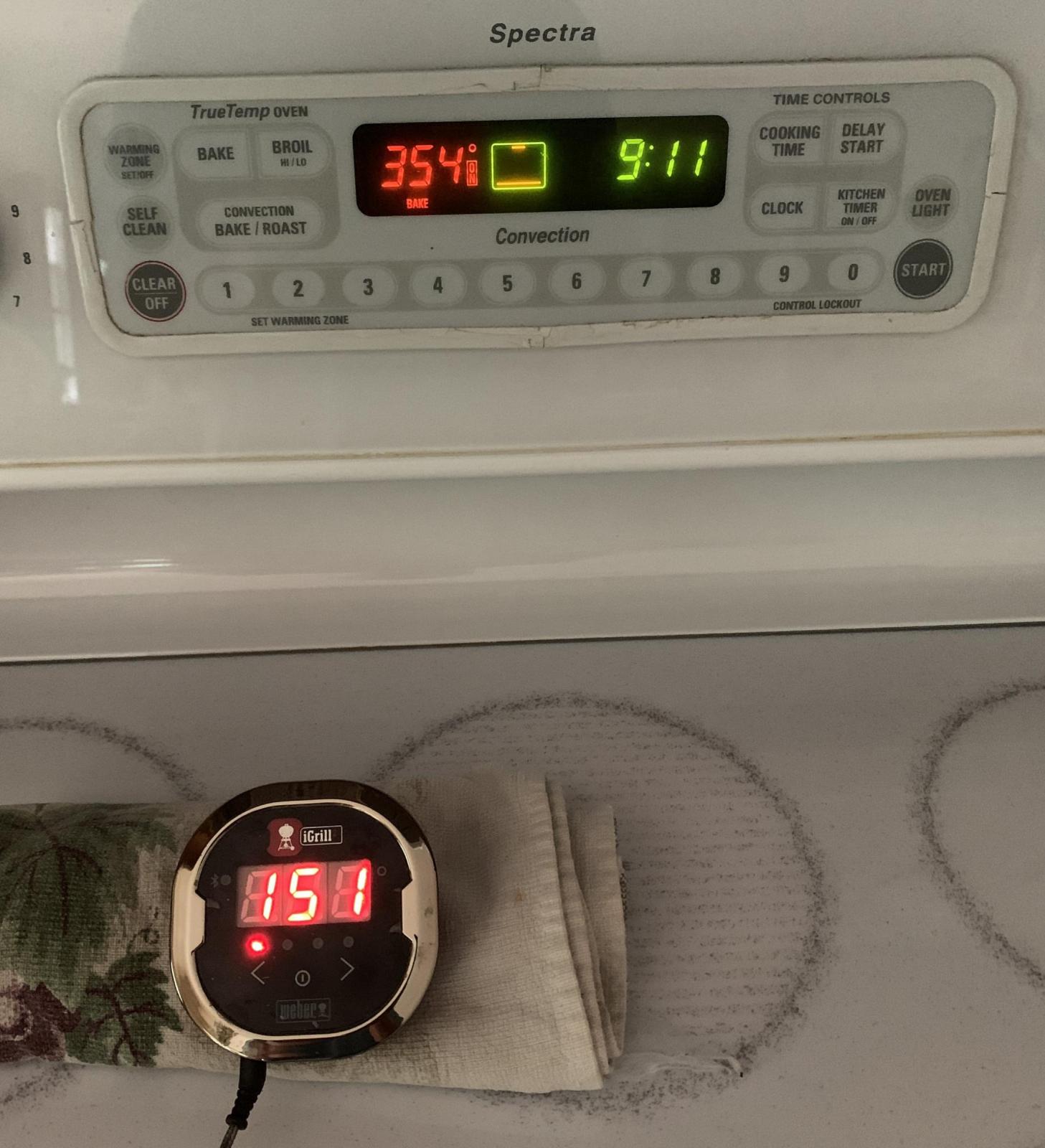 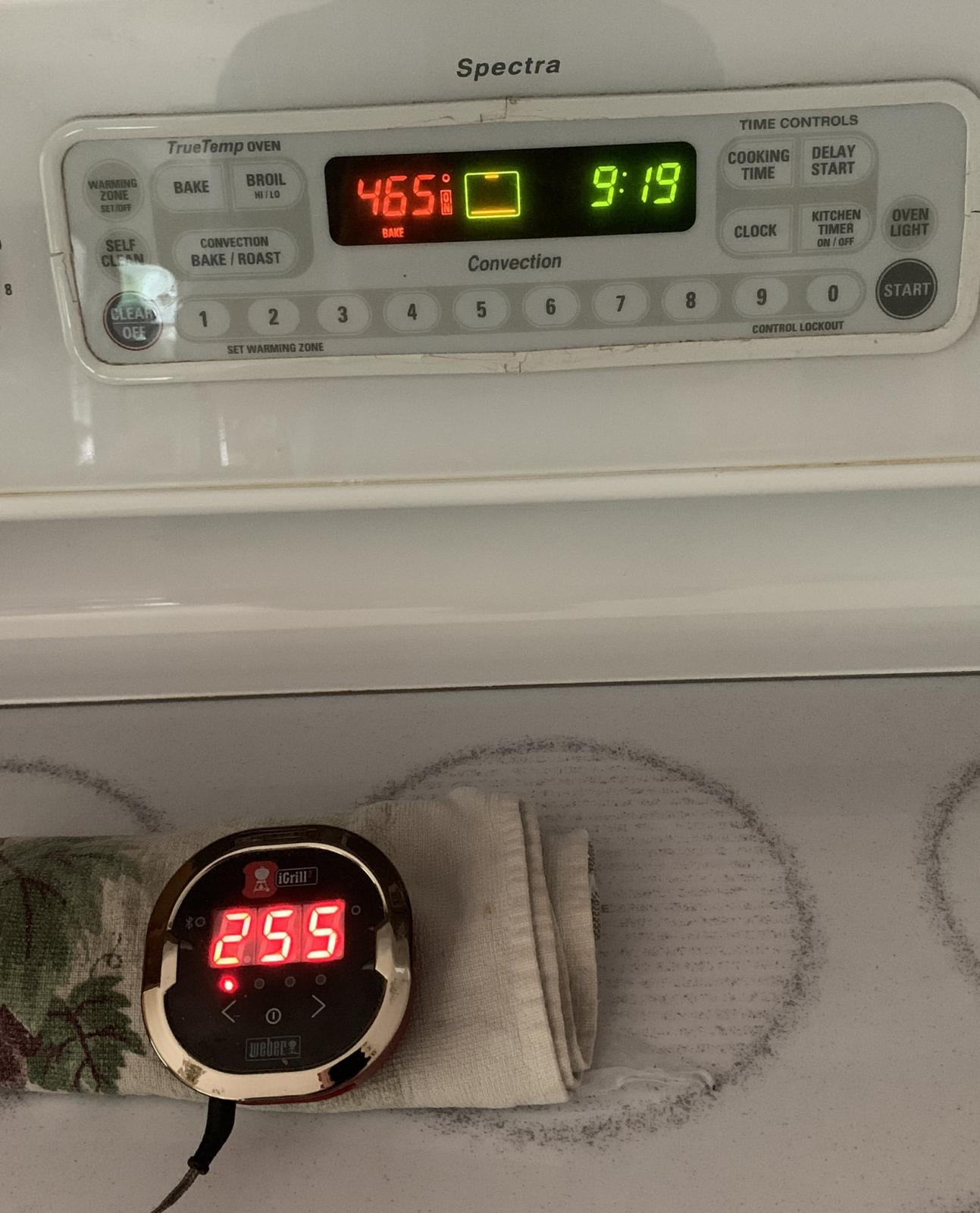 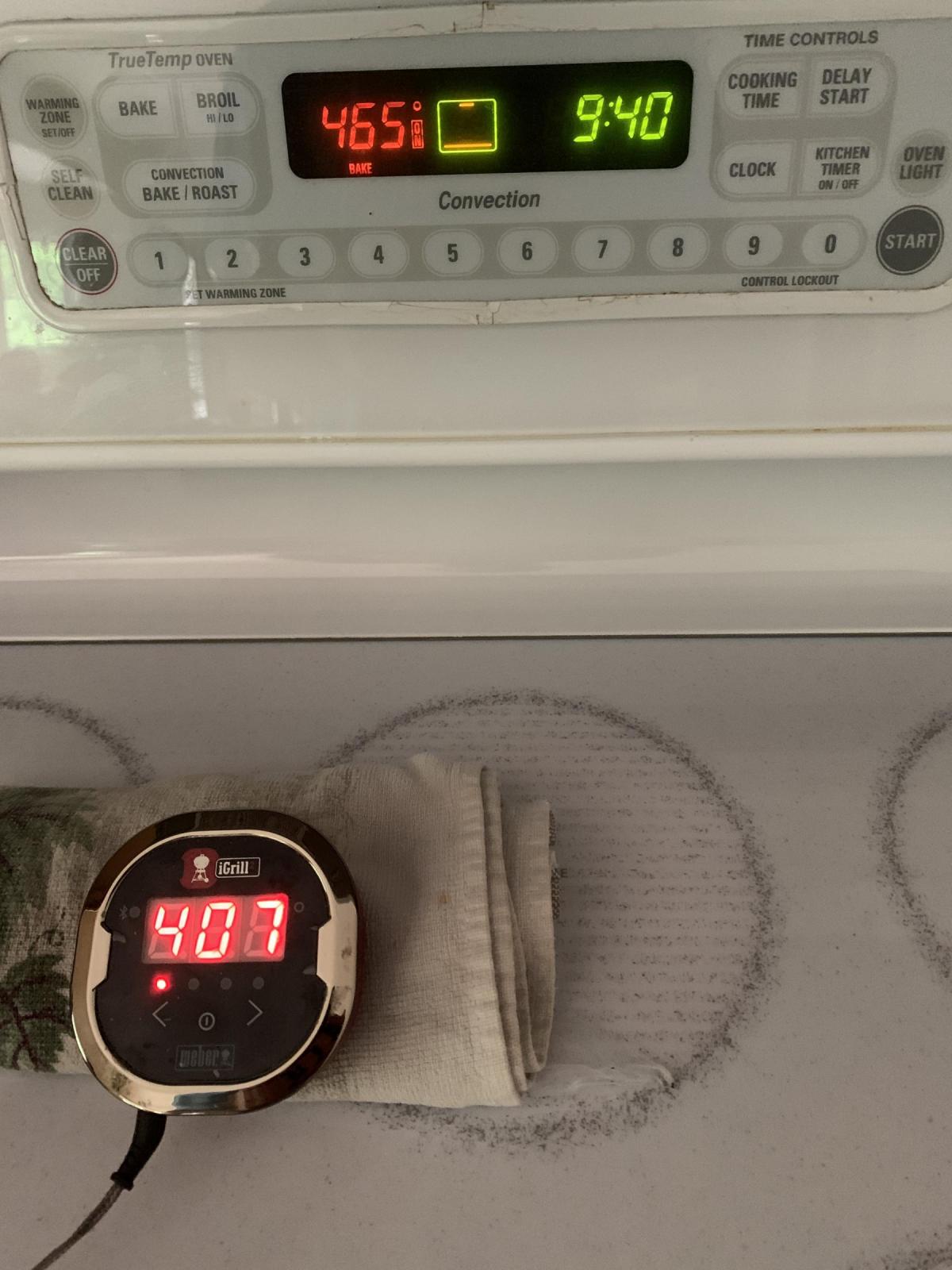 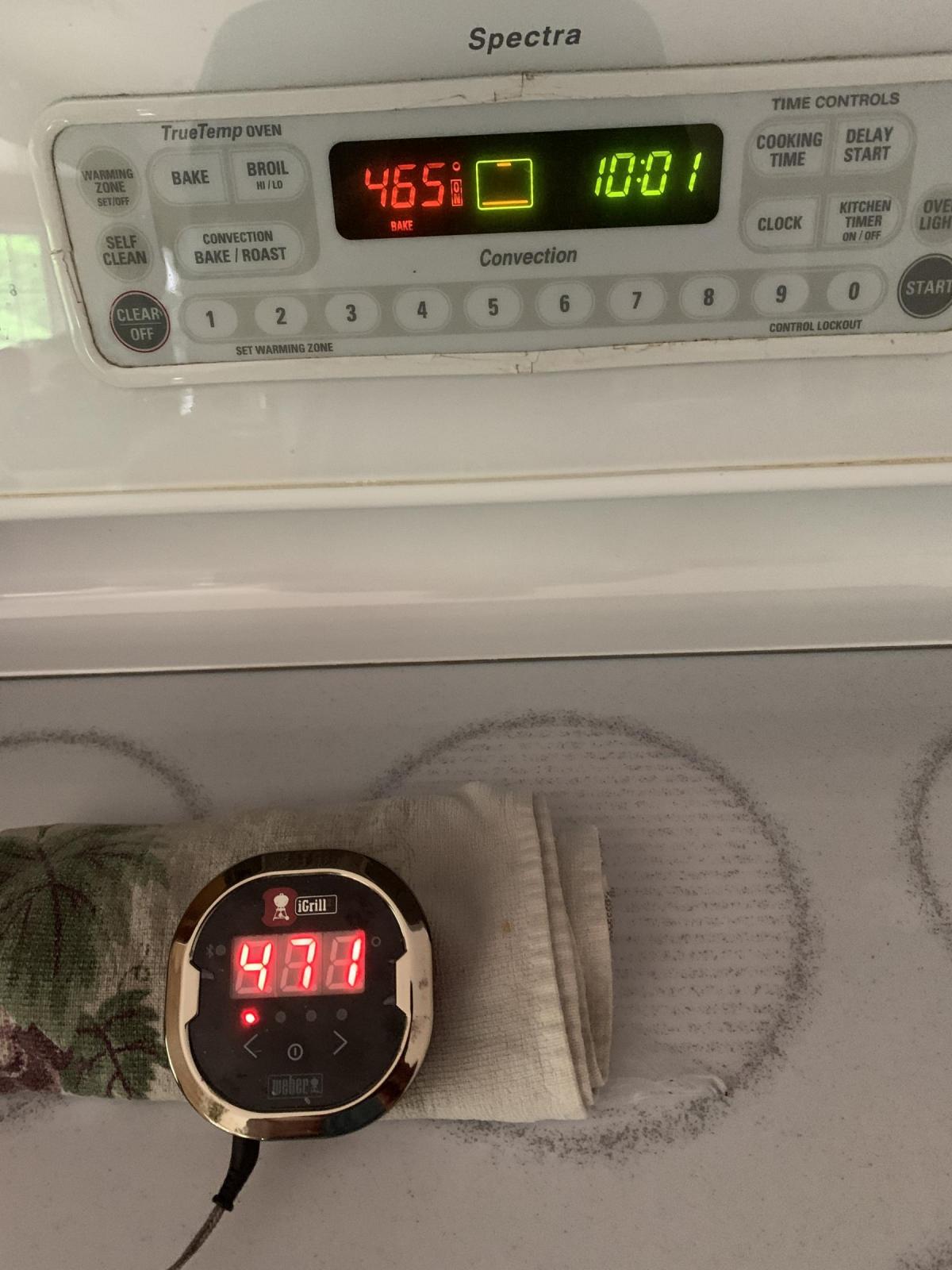 After loading the bread, I leave it at 465 deg F for 1 minute to try and recapture some of the heat lost by having the oven door open.  I have two loaves in the oven and the probe between them (sorry for the dirty oven glass!).  The first two photos are the temps and loaves after the 1 minute at 465 deg F.  The second two photos are the temps and loaves after 15 minutes at 400 deg F (oven basically off the entire time), and the last photo is 9 minutes after the oven had been vented and  set to 425 deg F.  You can see how the stone is slowly recovering temp in the bottom of the oven. 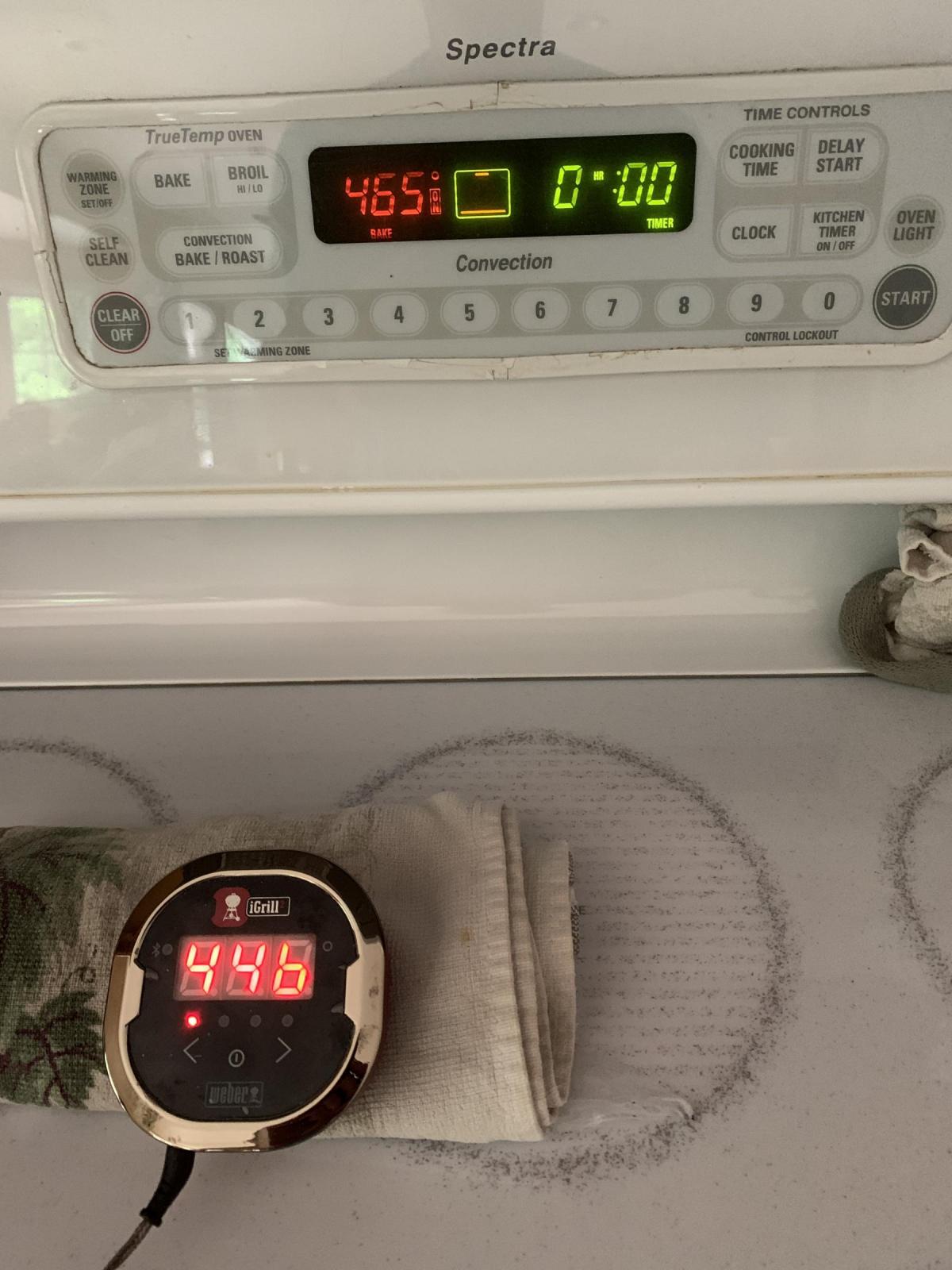 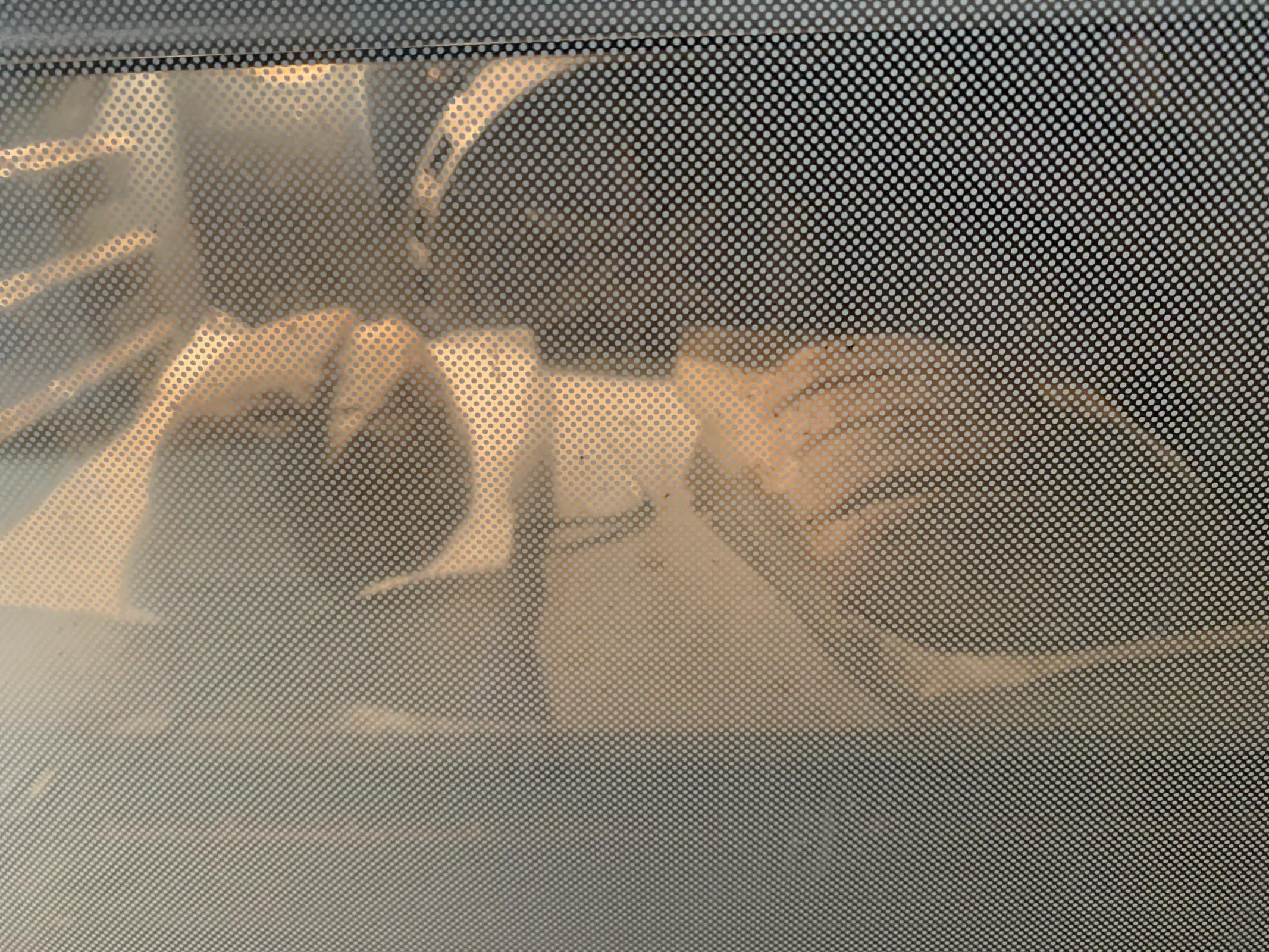 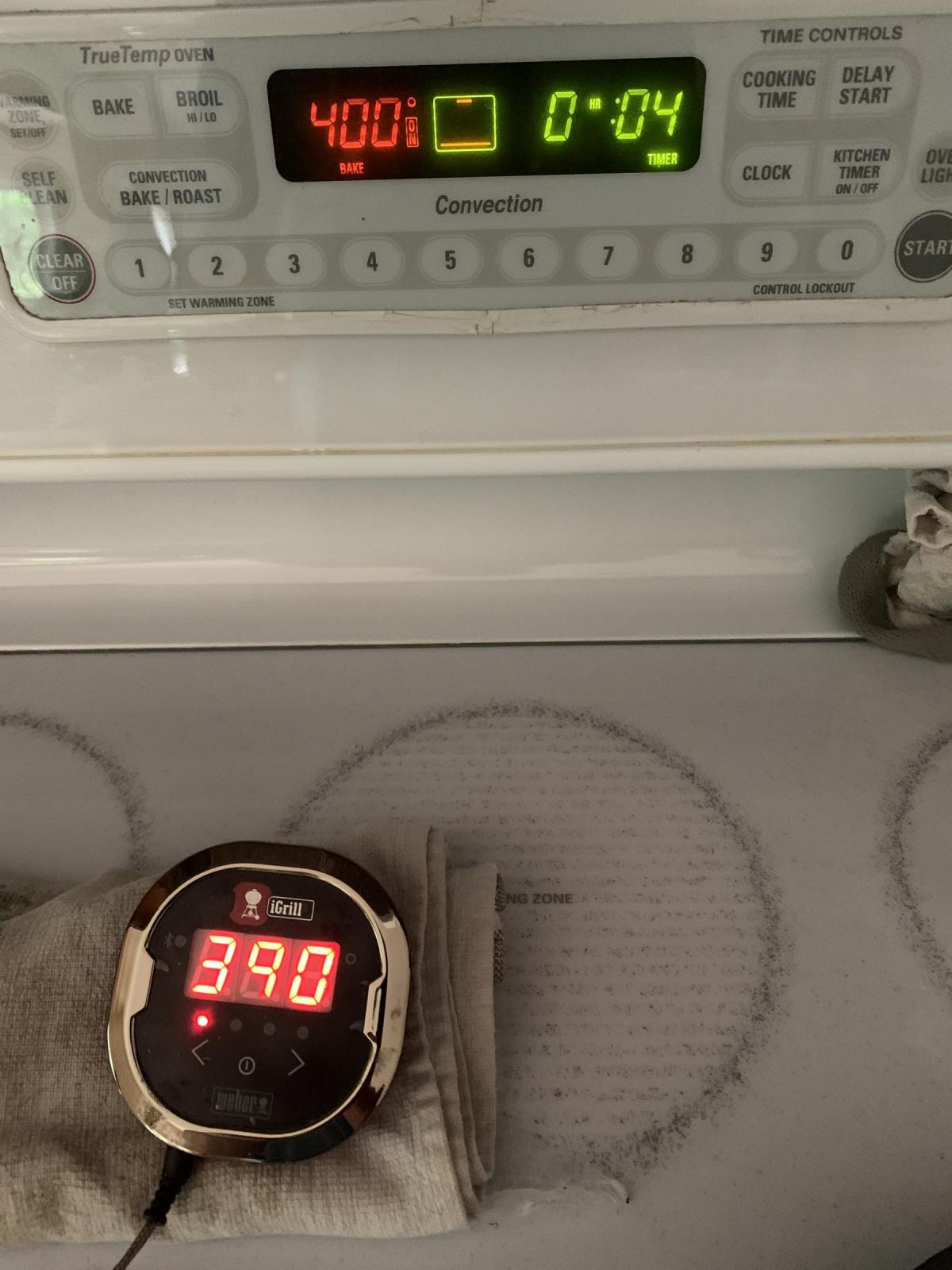 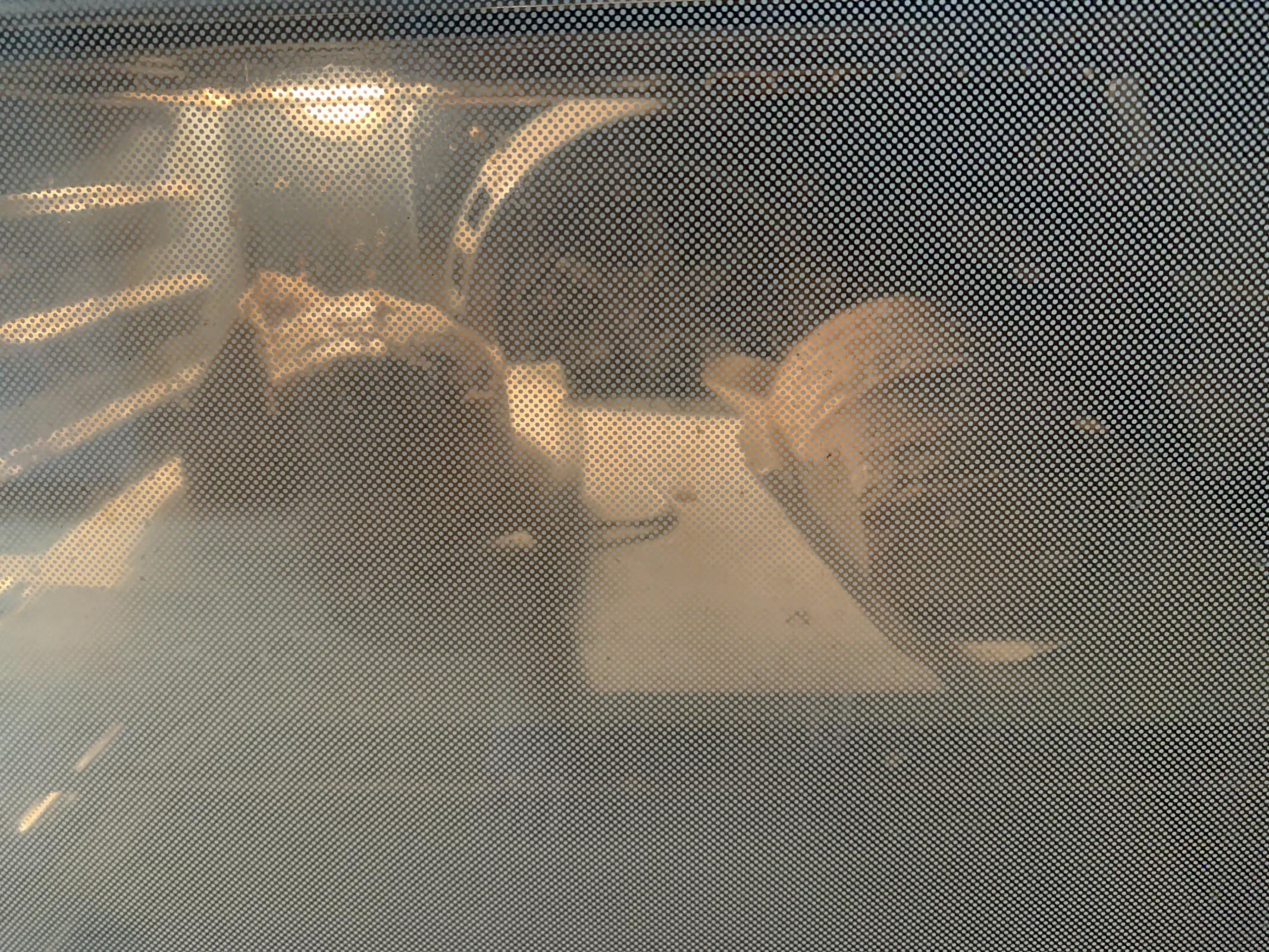 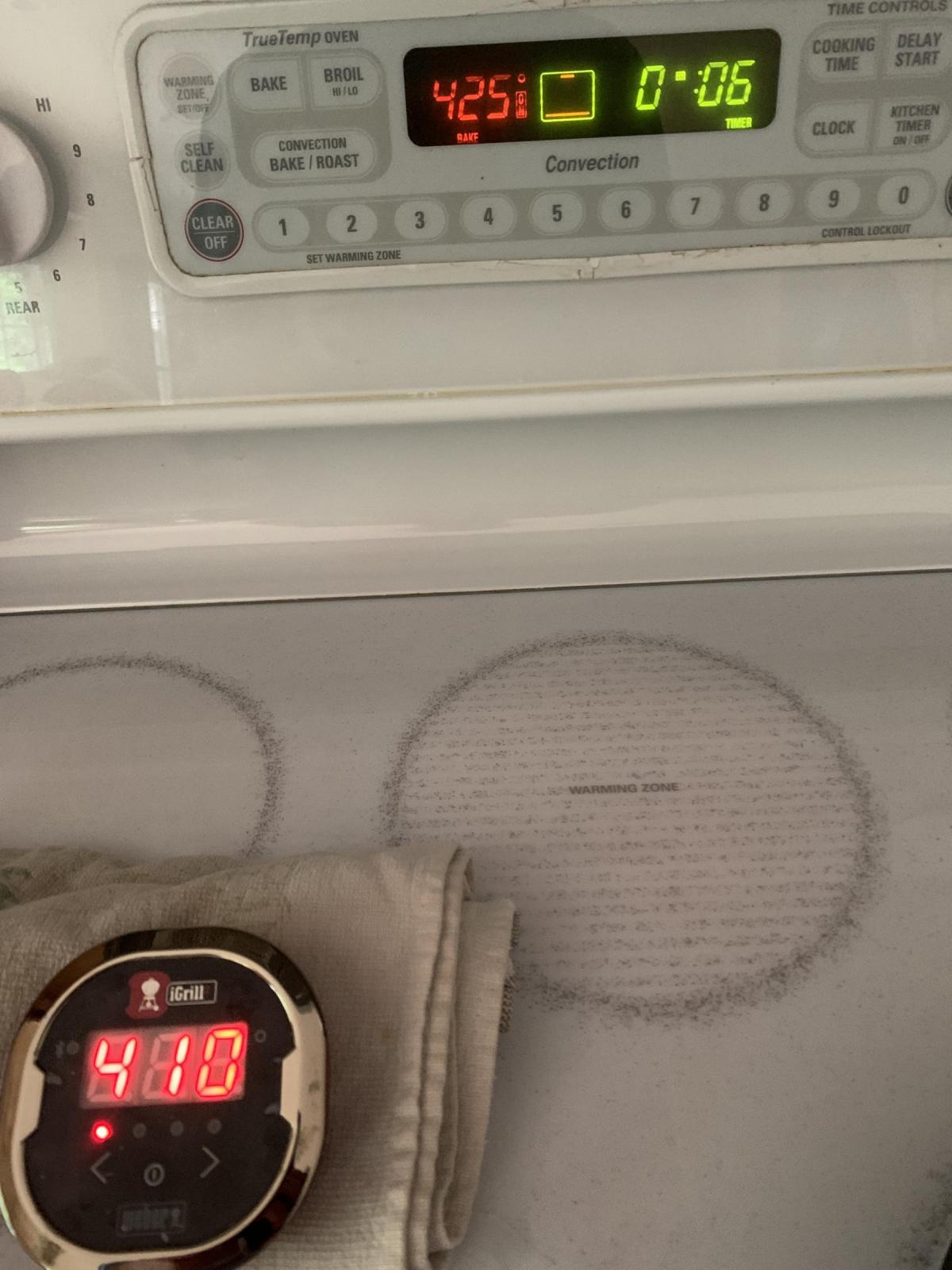 Hope this helps you understand what's happening in your oven and the importance of preheating to a set temperature for a set amount of time if you want consistency in your bakes, whichever method you use.

Thanks for the careful observations.

I am curious if the walls of the oven heat as slowly as the baking stone. Do you have a way of measuring that? I suspect the heat capacity of the stone is very different from the metal oven walls. The metal walls probably will heat faster than the stone. This is a double-edged sword: the stone will help maintain a more even temperature but it takes significantly more energy to reach that temperature (long preheat).

I agree that you will achieve greater consistency in your bakes by waiting for the stone to attain the desired temperature. For those that don't have (or use) a baking stone, I also believe that consistency can be obtained by preheating to the setpoint as long as the oven temperature is accurately measured.

Agree that the walls will likely heat faster than the stone.  I’m not sure if I can come up with a way to measure wall temp but I’ll see what I can do.

Agree with your last statement too.  What I wanted to show was that the oven temp and actual temp can vary quite a bit, and that if you preheat for a different length of time every bake, you’re probably not baking at the same temp even though the oven says you are.

Thanks for sharing this Troy, that is really helpful for those of us who do not have such temperature probes.

I’ve had good luck with the Inkbird temperature controllers for my proofing box and when I make mash in the Crockpot.  These might be a good option.

Curious to know what oven seeing you use - both top and bottom elements? Convection fan?

I use the bake setting without the convection fan.  The oven has a top and bottom element, but I think only the bottom element comes on with the Bake mode.  I think the top element only turns on when using Broil, but I’m not sure.  I’ve always used the top shield so it’s hard to see the element.

A few months ago after seeing the same video. I didn't leave the oven off for as long as in the video because I didn't need the steam for very long but It worked well for me with baguettes. It wasn't the guitars on the wall but somehow it just felt wrong and I was reluctant to try it again. Thanks for posting this with the pobe data. I may try it again with another stone on the top rack to help with the residual heat. I like the idea of turning the oven down to 400 instead of completely off. The oven I use now has the lower heating elements under the floor of the oven which makes temperature recovery slower.

Community Bake: Naturally Fermented Buckwheat...
Sorry! I know this is a starter ? re: Forkish’s...
Amount of dough for 9x5 loaf pans ?
Forkish’s new book. re: Day 5 mix. Need help...
Hey all, I'm looking for some advice on...
END_OF_DOCUMENT_TOKEN_TO_BE_REPLACED