Anis Bouabsa baguettes have been very popular on TFL over the years and I realized that I’ve only baked them three times so far.  Only once plain, another time with a sesame seed coat and then a third time with chocolate (this was so good).  Since there’s been chatter about Bouabsa baguettes recently I thought I’d try a fourth bake.  I so seldom bake with IDY I was very anxious about over proofing.  I don’t think they are over proofed but I do think my scores were a touch shallow. 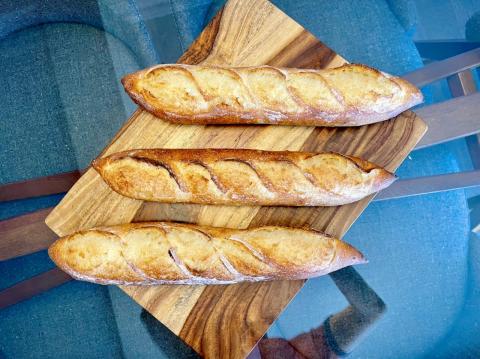 Mix IDY and diastatic malt into water, then flour and mix until no dry flour remains.  Autolyse for 20 mins.

Place in a bowl doing coil folds at 20 min intervals for 60 mins.

Cold retard dough for about 20 hours.

Pre-heat oven to 500°F  and prepare for steam baking as usual.

Divide dough into 3 portions and shape each into a roll.  Rest 20 mins then shape into baguettes and place in a floured couche.  The dough should pass the finger poke test when ready to bake.

30 mins into pre-heat pour boiling water into the Sylvia towel in your metal loaf pan.

Vent oven, drop temperature to 425-450°F and bake for a further 10-13 mins until the crust is the colour you prefer.  You will need to rotate the baguettes during this period to ensure even browning of all three.

Remove and cool on a rack. 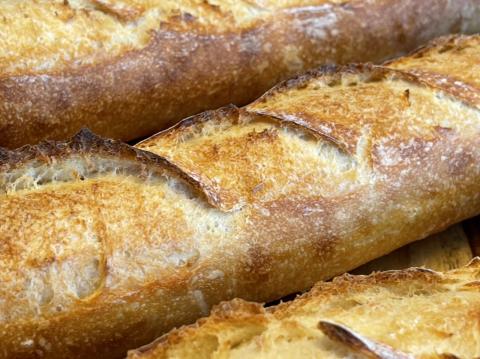 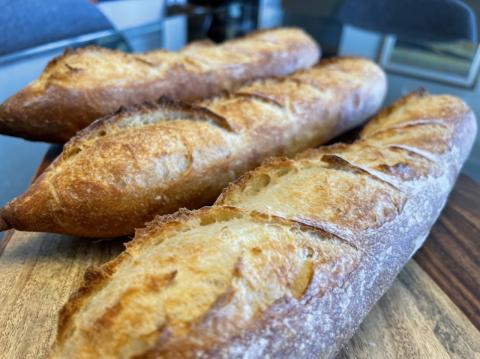 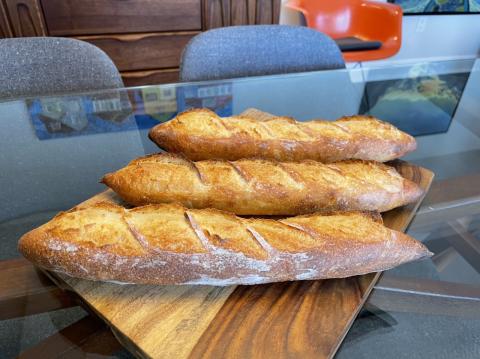 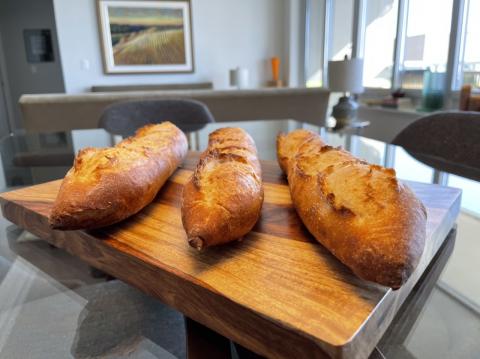 All three are going to a friend’s place so no crumb photos.

I put together a video showing the shaping.  I am enjoying Scott Megee’s shaping.

The shaping method is similar to the Hamelman method I use. I really like the heel of the hand that he uses to close the final seam and add tension instead of the finger tips. I have a hard enough time keeping track of the seam without rolling it in opposite directions but it obviously is working well for you. I was looking forward to seeing how the crumb came out with the intensive kneading so maybe you could do a repeat performance. You have become a master baker Benny thanks for sharing.

I never got comfortable using the heal of my hand to seal, I always found the palm also pressing down on the dough when I didn’t want it to.  So I’ve just given in and use my fingers instead which seems to work.

When you’re rolling the baguette out at the end, are you seam side down or up and are you rolling your hands in opposite or same directions?  I have found that I get better lengthening in the final roll when going in opposite directions so have switched to that.

In the same direction and even then if the end sticks It is possible to put a spiral into the seam which I think happened to me the last time. I do a minimal amount of rolling because the seam can get lost and then I have to find my reading glasses again.  I proof seam up if that is what you are asking.
Your dough in the video looks like it was nice to work with. I noticed you build a lot more tension in the pre shape than I do. Which I aim to try the next time I make them. It seems to improve the handling but increase the elasticity from what I could tell. That’s the crucial balancing act in shaping batons in my humble opinion, that and proper fermentation which by the way you nailed in your version.

I was actual asking about whether the seam was up or down while you are rolling the dough out. I used to roll seam up but now prefer to roll with the seam down and don’t worry about flouring the counter at all. Since my hands are going is opposite directions while rolling it doesn’t matter if the center of the dough is a bit stuck down to the counter and in fact it seems to help the stretching if it is a bit stick down.

im really happy about the circumferential tension that is built, it doesn’t seem to cause problems with lengthening.

My pre shape is a loose letter fold with some stitching to bury the sticky side. After shaping the log I do a couple of full rotations up and back and then a couple more to taper the ends. I drag the pre shape through some flour but none on the bench when I roll it. I have granite countertops but do my baggies on a piece of wooden butcher block because that is what I goy used to. The cold stone is nice for stretching pizza or sourdough that needs to chill before retarding. I should probably learn to upload video to explain it better. I like your Bread MD handle maybe I could get Bread Guide and share fishing stories(lies) as well. Have you ever told a patient that they should try using less water or maybe they are under proofed?;-)

Bread Guide is a great handle, but you better be ready to answer a ton of questions as a guide and do a lot of hand holding.  You should record your pre-shaping and shaping the next time you make baguettes.  Seeing is so much easier to understand than trying to describe it in words.

I have told a patient who had diabetes insipidus to drink less water LOL but never told one that they were under proofed.  😜

and make it all that much better!  Beauties.

Thank you Alan, my friends seemed to like them so that’s great.

I love me some  Bouabsa Baguettes! These are excellent specimens! Great job Benny!

Thank you Will, I appreciate your comments.  I hope you have been well and busy baking up your beautiful breads, pies and pizzas.

Thank you Rob, I’m feeling pretty good about baking baguettes now.  It had been 3 months since I last made them and I wasn’t panicking during the shaping and scoring LOL.

I'm wondering, Benny, if your 200 french folds made a big diff when it came to shaping & holding the score. The bouabsa recipes I've followed don't specify much other than 'mix till everything's smooth' & then do 3 sets of folds before stashing in the fridge. Next time I'm up for baguettes, I'm gonna try your folding strategy (and the shaping method you recommend) & see if I get better results.

You know as I’ve bake more baguettes outside of the Community Bake, my thinking on dough development has changed significantly.  I’ve said this before but don’t mind saying it again.  I’ve now baked baguettes using different formulas using the strategy of more dough development upfront.  I counter the increased elasticity by increasing the hydration which back during the CB I was scared to do as I felt like such a newbie.  The idea behind more dough development is the idea that with greater development I should be able to ferment the dough more than with less development.  Also with more development I’ve felt that more tension can be built into the dough circumferentially and this can enhance the grigne/ears of the baked baguette.

So far I believe these ideas have been true with each bake where I have used this strategy.  Now, my bakes of baguettes are separated by months so it would be better if I was baking them weekly and I’d have far more evidence that this works.  However, with this and my other two baguette bakes of 2022 I think have shown that this works.

Those crusts look crispy and tasty Benny!  Thank you for posting the shaping video.

Thanks for your comments and for watching the video Troy.  Hopefully the video might helps a couple of bakers in their quest to bake baguettes.

Hi Benny!  When (if) I get around to finally jumping into baguette making adventures, I know where to circle back to for some expert advice and guidance.  One day!

Thanks so much Leigh, I hope you do start baking baguettes, we need more bakers in the Baguette Brigade!  They are a worthy endeavor and starting out with IDY baguettes or a hybrid recipe can be a great way to start.

I think I've forgotten how to make bread in the last 7 months :p

Maybe the knowledge was part of the 55lbs I lost :)

The taste and texture remind me of a product called Belgian Bread that I used to get at Sobeys in Ottawa. Moist, a bit chewy. I always liked it.

I did over 100 French folds but it wasn't really coming together and I made a splashy mess. I think it was overhydrated.

I tried Rubaud for awhile but my arms are wimpy :p

I ended up banging it with my mixer until it came together in a smooth dough.

I did the cold retard but the next day the dough was quite sticky.

EDIT hm wait a minute... I used my own diastatic malt I made last year. Maybe it caused some starch attack! 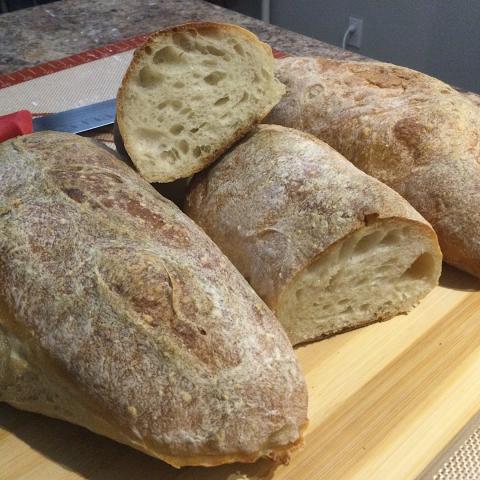 Nice to see you back David.  How much diastatic malt did you use?  I’m sure these were very tasty.

I used 6g of diastatic malt as per the spreadsheet. The dough always seemed quite sticky which is unusual for IDY doughs for me.

I made the bread for homemade onion soup, which we are making today, so it will be floating on the soup under some broiled gruyere.

Hope all is well in Ft. Lauderdale. I'm enjoying the cold here as it means bright sunny skies :)

Interesting that the dough was quite sticky, I don’t recall that happening with that much diastatic malt.  Regardless it will be great in your French onion soup, yumm.

Things are great down here in Fort Lauderdale, good that you’re getting some sunny skies up in Toronto.  Those sunny days in the fall and winter can be amazing.

The bread was perfect for the soup... wow. Best ever. I'll take another kick at the baguettes but next weekend I want to try making those folded bao buns they have at Mean Bao. So expensive but tasty.

We have a ton of beef from the roasted+pressure cooked beef neck bones we used to build the soup broth. Maybe I'll make some homemade pickles to go with them.

I'm thinking to use this recipe from TFL

Oh steamed boa have been on my list to make for some time.  I look forward to seeing what you come up with David.

All you have to do is go out in the swamps and catch one.  Or python, if you prefer.

But maybe you meant bao?

Nice to see you back at the scratching post having a go at it. The Bouabsa’s look like something that the cat dragged in but I’m glad you liked them. Losing 50 lbs is worth it even if you have to learn to bake again;-)  I missed reading your post so welcome back.
Don

Thanks Don. I've got lots of things I want to try and you guys have done so much while I was away.

So much amazing creativity here!