I still have some Lap Cheong (Chinese sausage) left over from my Lap Cheong filled buns so wanted to use some up. I’ve been wondering what to top a focaccia with to go along with the lap cheong when I saw a post by King Arthur of a Taiwanese Focaccia, so I borrowed some of their ideas and added a couple of slight changes of my own. For one I had a bit of semola rimacinata left that I wanted to use up so all the flour in this focaccia is that finely ground semolina. One negative to this flour is that it is challenging to get a really open crumb, but that’s alright it doesn’t really bother me. So in addition to the lap cheong, I added toasted sesame seed oil, black and white sesame seeds, scallions, corn, kewpie mayo and cilantro. 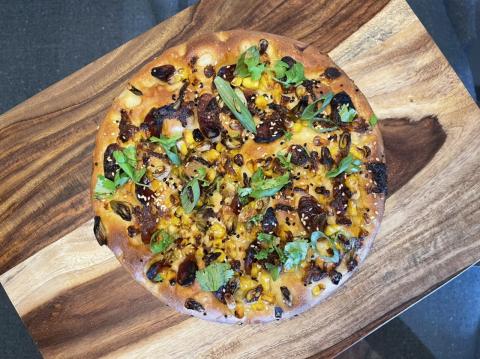 The levain was made the night before and the dough was developed using the stand mixer adding the oil last. Bulk fermentation went for about 6 hours and then the dough had a cold retard until the following day.

The cold dough was then transferred to a 9” cake pan that was well oiled with olive oil. The dough was easily stretched out to fill the pan. The dough was left to double in size. About 30 mins prior to doubling in size the oven was pre-heated at 450°F.

The dough was docked using very wet fingers. Toasted sesame seed oil was drizzled on the dough. The following were placed on the dough, sliced pre-cooked lap cheong, corn, scallions, black and white sesame seeds and then kewpie mayo. 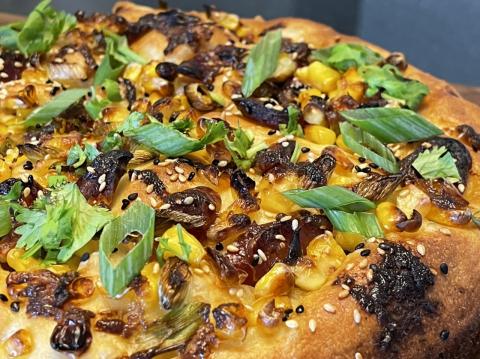 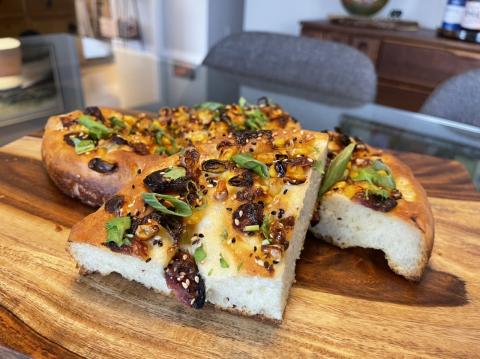 Here’s a short video I made about this bread.

Wow, Benny!  This looks fantastic even though you were worried about crumb with the semolina--fantastic crumb.  It looks super light and airy.  Given these great ingredients, I'm sure it is delicious.  Thanks for posting...the base recipe could easily be adjusted to any toppings!

Thank you Leigh, when I remake this I will increase the pre-fermented flour.  This dough fermented a bit slow for some reason, perhaps in part because of the oil?  I love the lap cheong, but as you can imagine it isn’t the healthiest of things to eat so I really don’t have it often at all.

I’ll have to try it once I get over this terrible cold!

Thank you and sorry to hear about your cold.

Man that looks and sounds good Benny.  May not have the really open crumb, but does it have that creamy semolina texture?  The picture of the slice almost looks like a soft piece of cake!

Thanks Troy, it does have that creamy semolina texture going on and it is surprisingly light and airy.