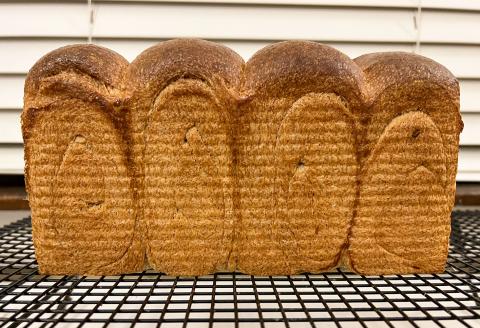 This is Benny's 100% WW Sourdough Hokkaido Milk Bread. (The link points to his 2.0 version and I'm not positive whether I made that one or another variant.) Anyway, I attempted this bread back in January but got no rise to speak of, undoubtedly because I did not a thing to prepare my rye sour for a sweet levain and enriched dough. I baked it anyway and while it rose a couple inches in the oven, it barely filled half the pan. Still, the flavor and texture were good enough to convince me that this bread deserved my best effort, so I choose to make a new osmotolerant starter from scratch. Any time I’ve tried to convert my rye starter to anything else, it proved stubbornly resistant to change. For this new sweet stiff starter, I followed the recipe in Vanessa Kimball’s Sweet Sourdough and it was ready for baking a week or so later. Unfortunately, I got sidetracked by other projects and didn’t soon have a chance to return to this bread. I’ve been faithfully maintaining the sweet stiff starter with this bread in mind. Finally, Monday was the day.

The starter was mixed with 100% whole grain, home ground Red Fife. The flour used in the levain and final dough was KAF 100% Organic Whole Wheat. I opted for commercial flour because my current inventory of of red wheat berries is from a new supplier and I’m unfamiliar with its performance. So, having failed miserably at this bread the first time out, I hoped for a modicum of success this time and so went with a flour unlikely to pack any surprises. There were a couple minor changes to the ingredients, which were these: I used 7g salt instead of 6g because I thought my taste buds would prefer it. Also, 20g honey was replaced by 1 Tbsp (I didn’t bother weighing it) brown sugar, again due to flavor preference. Finally, I accidentally omitted the diastatic malt powder. Oops. Maybe if the little beasties had their snack, they’d have risen a little higher for me.

The levain peaked at about 150% in 12½ hours of rise time. I tend to mix my levains late at night because I’m worried they’ll overferment while I’m asleep. With the weather warming here, I was planning for more activity than I’ve been used to over the winter. It’s a strategy that usually pays off, but recently I’ve been making breads such as this one with extended proof times. As I'm learning, late starts can backfire on you with long-proofing doughs and this was one of those times.

The mix went as expected and the bulk lasted 3.5 hours with no discernible increase in volume. For shaping, the dough was very soft and it stuck in spots to the rolling pin, so the pin was lightly floured as needed. The dough was then rolled into scrolls and the pan filled with the scrolls facing alternating directions and not touching the sidewalls of the buttered 9" x 4” USA pullman pan. The pan was covered with a shower cap and placed back in the proofer at 82°F. It was then 6 p.m. My family doesn’t like sourness in high percentage WW bread, so the dough would not be retarded. I was resigned to staying up no matter how long it took.

How long it took turned out to be only 5 hours – which I was thrilled about, because I had been bracing myself for 6-8 hours. It was gently brushed with egg wash and placed into a preheated 350°F oven just after 11 p.m. The bread was baked for 50 minutes at 350°F and then removed from the pan to bake for another 10 minutes at 325°F. This bread didn’t achieve the towering heights we’ve seen in Benny’s loaves but it is tall enough, very pretty, and wonderfully fragrant. A touch of sourness lingers in the finish. It's mild and acidic in a fruity way, not unpleasant, but not my family's preference. Next time, I will probably spike the dough with some IDY to minimize the fermentation time and, hopefully, the remaining touch of acidity. I would also opt for a better tasting home ground wheat. All in all, a lovely, fragrant bread with good body and a perfectly soft texture.

This is a wonderful formula, Benny, sure to be a family favorite. I recall that you spent a long time working on this formula. Thank you for developing and sharing it. 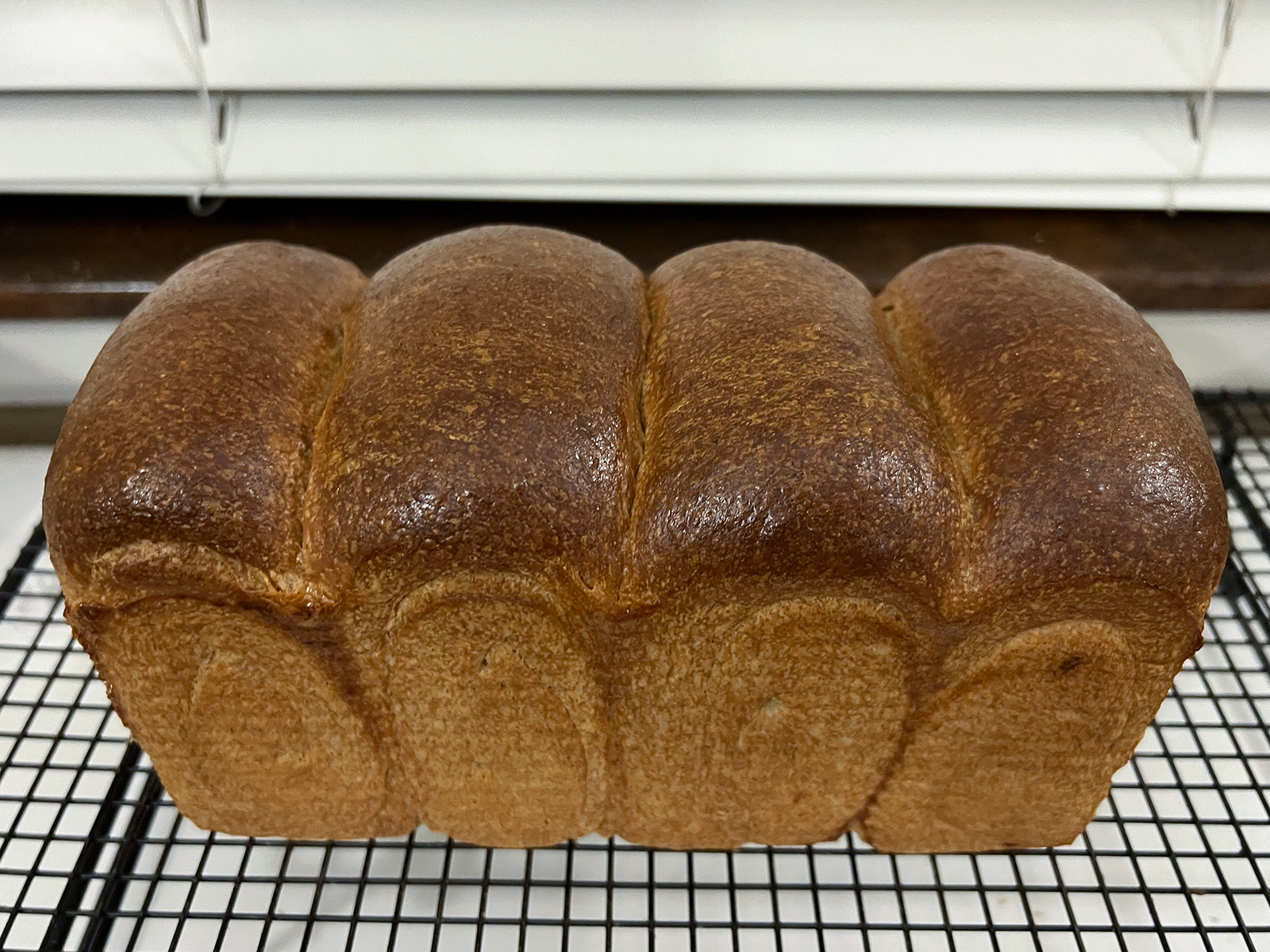 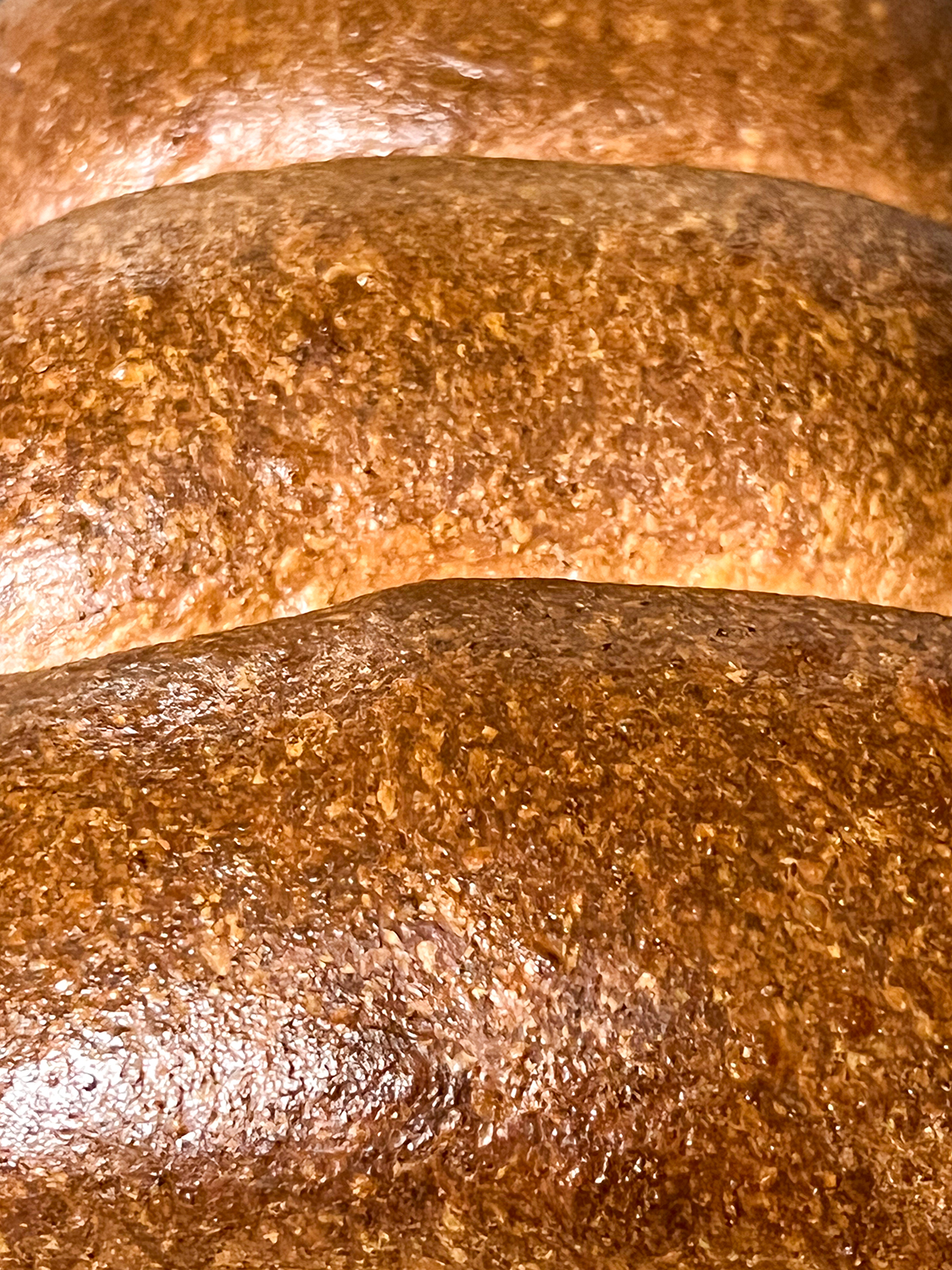 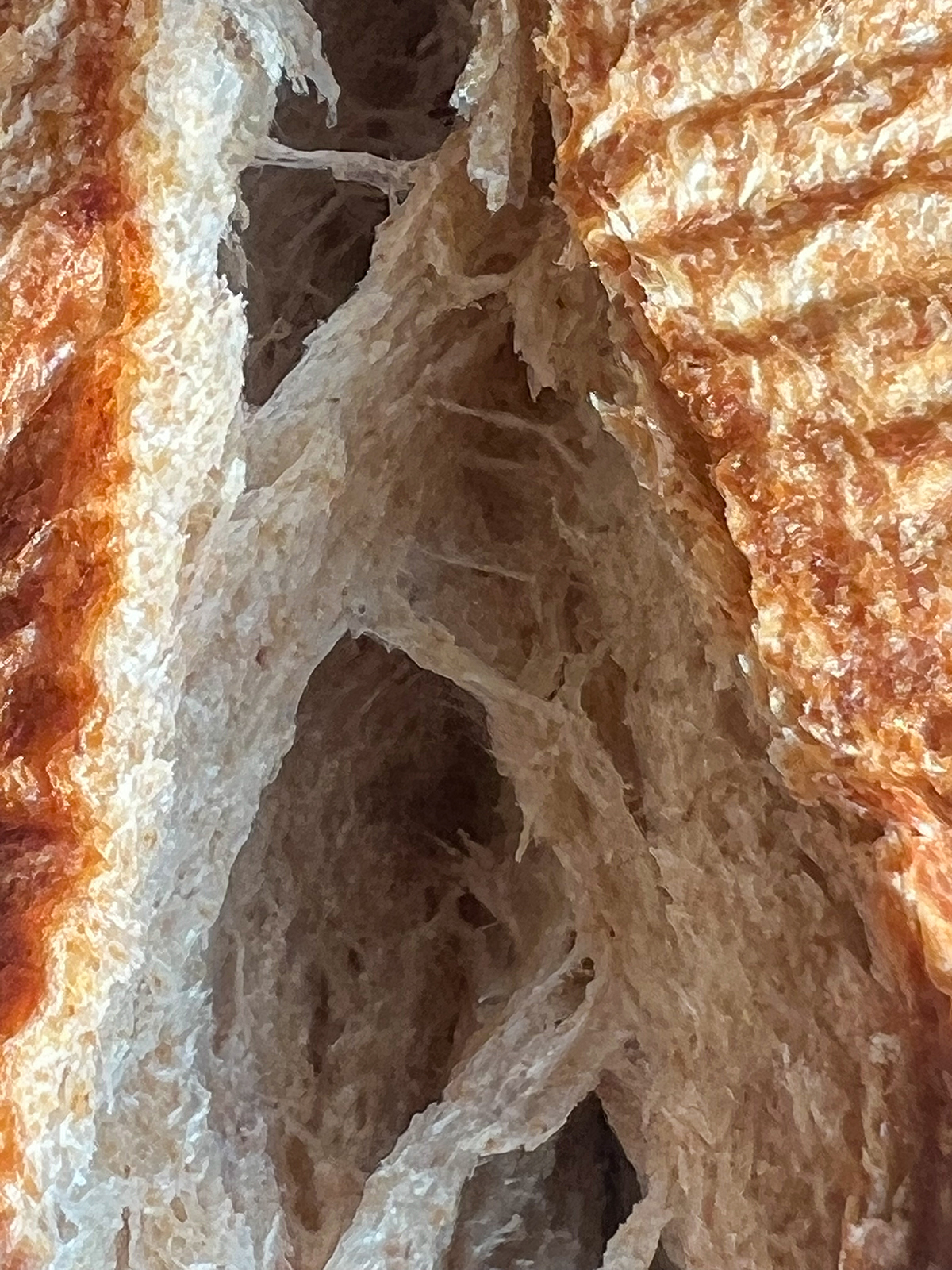 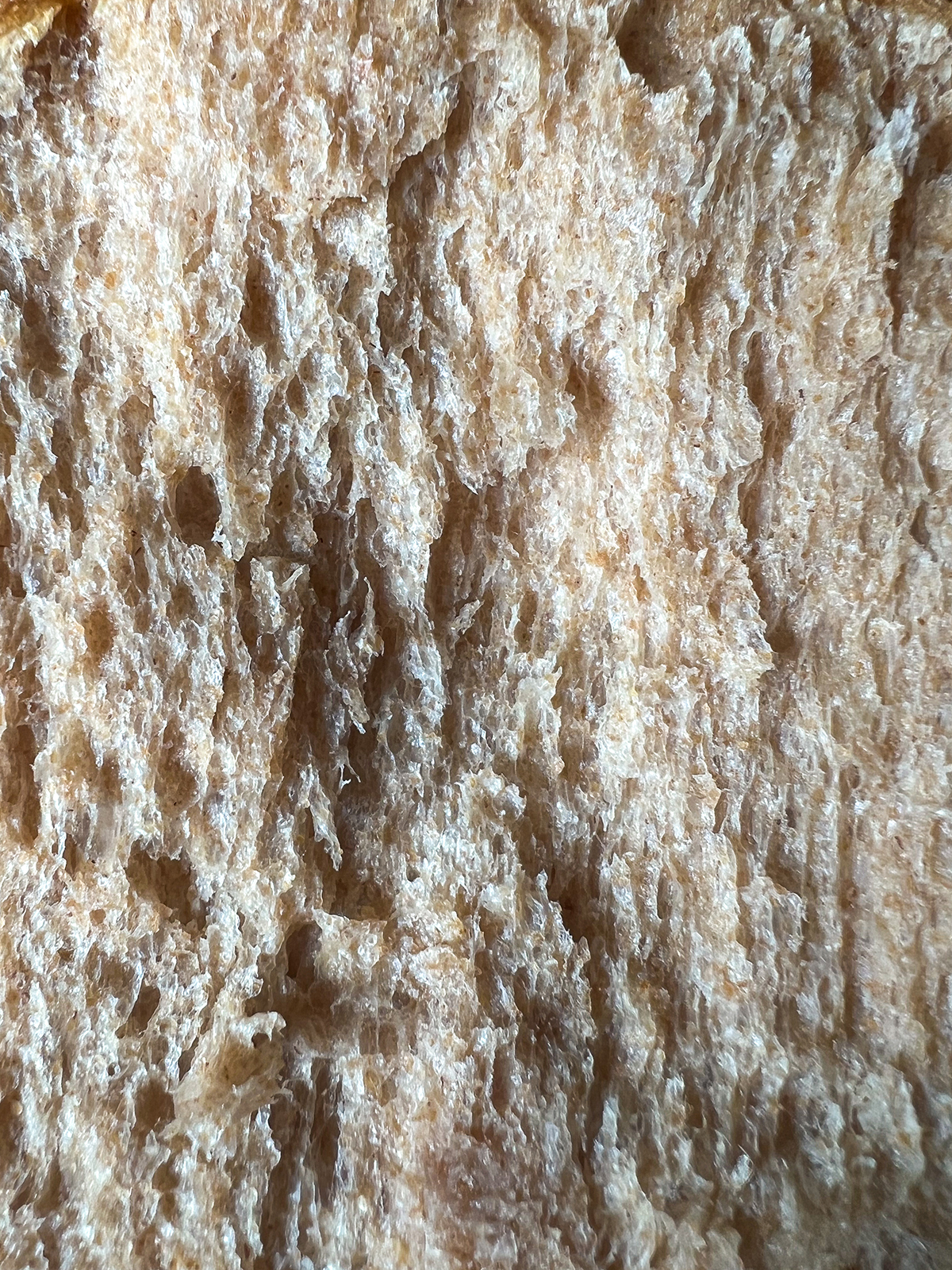 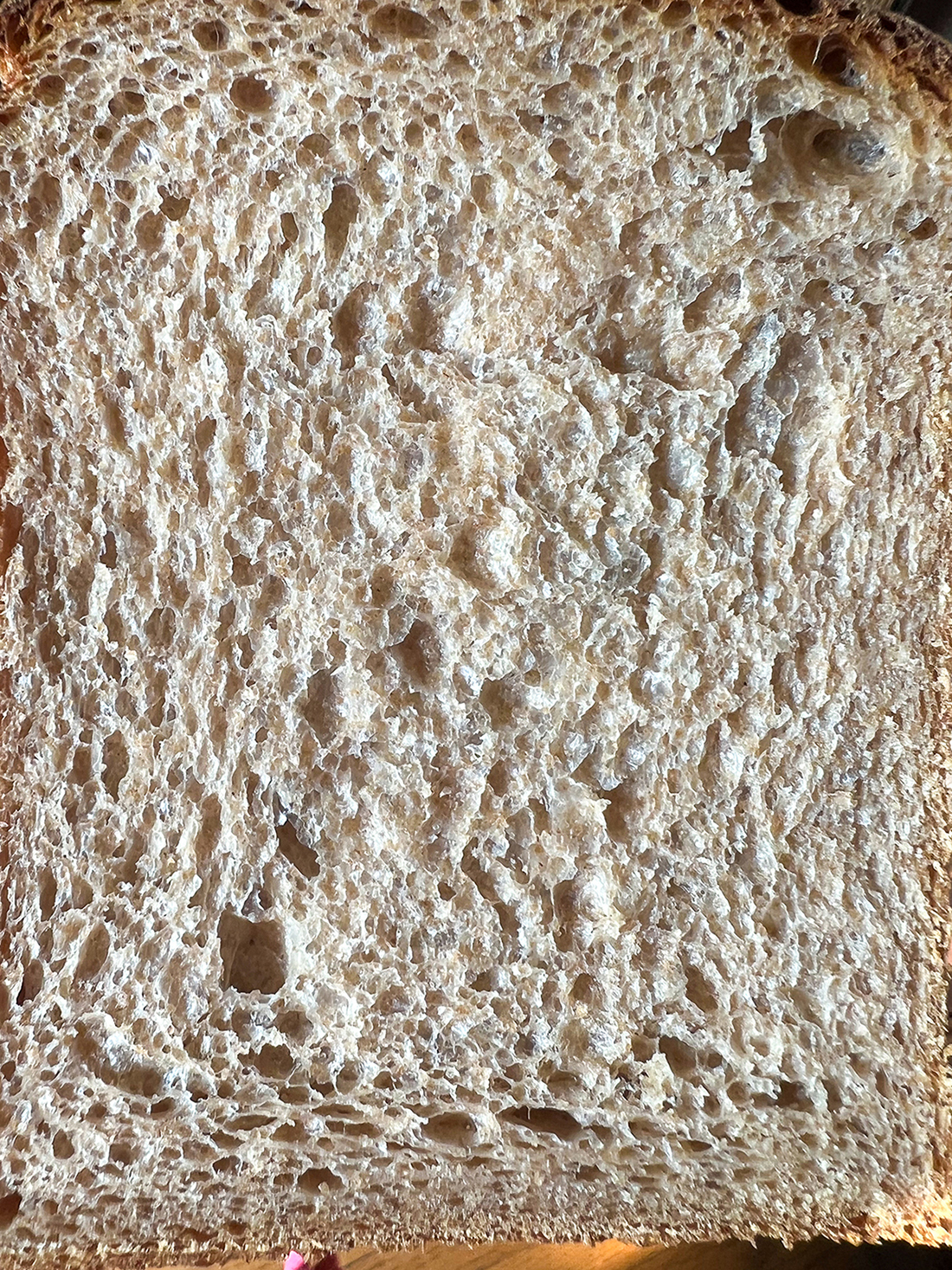 Looks great AG!  Based on the swirls you can see, it looks like you had a very good rise this time.  One of Benny’s milk breads is on my short list of bakes too.

I admit I'm happy with the bake but the credit really goes to Benny for formulating it. I just (mostly) followed instructions. It's a fun bake, with the tang zhong and the stiff sweet levain and the intensive mix, and rolling up the dough strips... not things you get to practice at every day.

AG that is gorgeous, I love the close up of the shiny crust on top.  As I mentioned to you over at Breadtopia, your flour could be thirstier than mine so you could increase the hydration of the levain a bit and you might get a better rise out of it.  Just remember to keep the sugar : water concentration the same so you ensure that the sugar’s osmotic pressure remains the same.

On the other hand, yes of course spiking it with a bit of IDY will speed things up and reduce the acids as well.

I’m so glad you tried baking this bread, variations of it are on regular rotation here.

After some side conversations with Benny, I think I now understand why my bread was slow to rise and had a touch of sourness in the flavor. I'll explain briefly for the benefit of anyone who might be interested:

It turns out that in an attempt to optimize the starter for the levain, I unwittingly upset the delicate balance required for this stiff sweet levain to work properly. Here's where I went wrong: The formula requires a 56% concentration of sugar to water. This is important in order to exert osmotic pressure on the LABs while still allowing yeasts to flourish. Benny used his usual 100% hydration rye starter to inoculate the stiff sweet levain whereas I made a stiff sweet starter specifically for this project. Unfortunately, when used to inoculate the levain, the stiff sweet starter introduced less water and more sugar into the levain, boosting the concentration of sugar to higher levels than intended. The concentration may have been high enough to suppress yeast activity as well as LAB activity. This makes sense based on the sour notes present in the final bread and the length of time it took for the dough to start rising. I'll make the bread again taking care to ensure the sugar concentration in the levain is 56%.

Whew! Mr. McIntosh wherever you are, I hope you're reading this!! (my old HS chem teacher who used to joke that I was a tragedy because I loved science but couldn't do the math 😂)

Interesting post, not sure how I missed it! Well made AG bread looks super.

Love the late night baking, yet another loaf claims some sleep from the baker!

I'm looking forward to trying it again with the levain in proper balance. Aside from being slightly more acidic than we like our whole grain breads, I'm more than happy with this bake.

Between this and the slow-going YW breads, I'm getting used to late bakes. Good to know I'm not the only one pulling loaves out of the oven in the wee hours.