My original plan was to test bake a bread raised by sakadane, however, that didn’t get bubbly enough to raise anything.  So plan B was baked instead.  I have a small amount of einkorn that I haven’t touched recently and thought that it would be perfect to use as a tangzhong.  It has poor gluten so gelatinizing it in a tangzhong is a perfect way to add it to a bread.  I also enjoyed a test bake of buttermilk bread that I did recently so decided on a buttermilk bread. 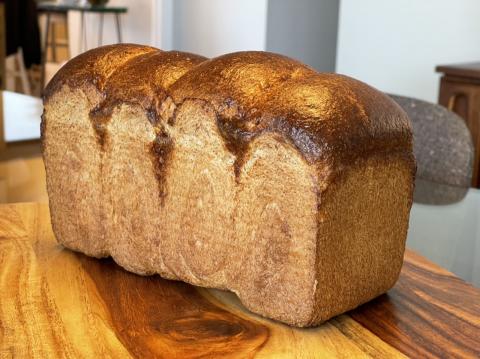 Press down with your knuckles to create a uniform surface and to push out air.

At a temperature of 78ºF, it typically takes up to 10-12 hours for this sweet stiff levain to be at peak.

Put about 1” of water in a sauce pan set on medium high heat. In the bowl of the stand mixer stir the buttermilk and flour until blended. Then place the bowl on the sauce pan to cook the tangzhong (Bain Marie) for several minutes until well thickened, stirring regularly with a spoon or heat-resistant spatula. Theoretically it should reach 65ºC (149ºF) but I don’t find I need to measure the temperature as the tangzhong gelatinizes at this temperature.  Let cool in the bowl and then refrigerate until the next morning.

In the bowl of a stand mixer, add the milk, egg, tangzhong, salt, sugar and levain.  Mix and then break up the levain into smaller pieces.  Next add the flour and vital wheat gluten.  Mix on low speed until there is no dry flour remaining.  Once incorporated increase the speed gradually to medium.  Mix at medium until the gluten is moderately developed.  With the mixer running add the room temperature butter one pat at a time until it is fully incorporated, waiting until each pat is well incorporated before adding the next.  Continue to mix until you can  pull a good windowpane, not quite as good as a white flour because the bran will interrupt the windowpane somewhat.

Shape the dough into a tight ball, cover in the bowl and ferment for 3-4 hours at 82ºF.  There should be some rise visible at this stage.

You can next place the dough into the fridge to chill the dough for about 1.5 hours, this makes rolling the dough easier, remember if you do so the final proof will take longer.  Alternatively, you can do a cold retard in the fridge overnight.

Prepare your pans by greasing them or line with parchment paper.
Scrape the dough out onto a clean counter top. Lightly flour the bench. Transfer the dough onto the bench and divide it into four. I like to weigh them to have equal sized lobes. Shape each tightly into a boule, allow to rest 5 mins. Using a rolling pin roll each ball out and then letterfold. Turn 90* and using a rolling pin roll each out to at least 8”. Letterfold again from the sides so you have a long narrow dough. Then using a rolling pin, roll flatter but keeping the dough relatively narrow.  The reason to so this extra letterfold is that the shorter fatter rolls when placed in the pan will not touch the sides of the pan.  This allows the swirled ends to rise during final proof.  Next roll each into a tight roll with some tension. Arrange the rolls of dough inside your lined pan alternating the direction of the swirls. This should allow a greater rise during proof and in the oven.

Cover and let proof for 6-8 hours, longer time if you chilled your dough for shaping. I proof until the top of the dough comes to within 1 cm of the top edge of the pan. 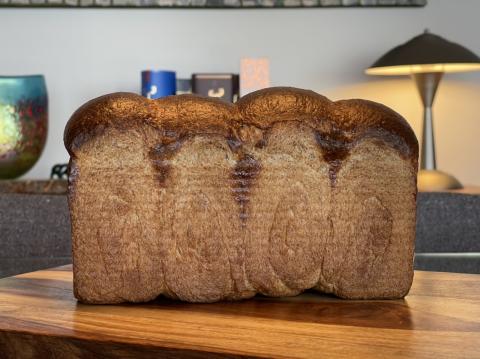 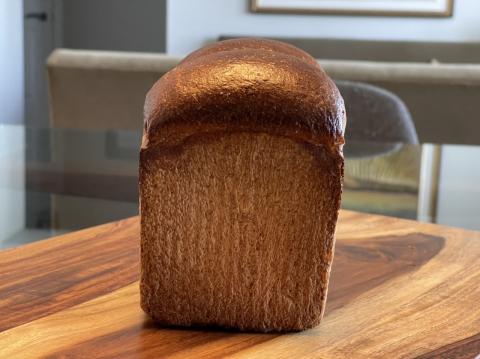 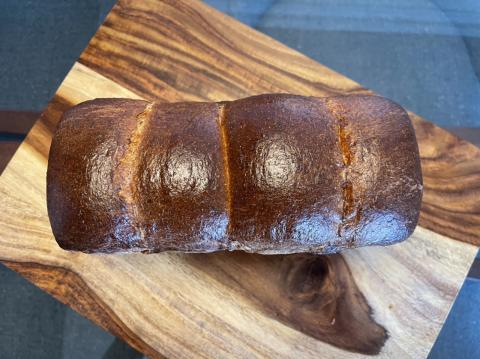 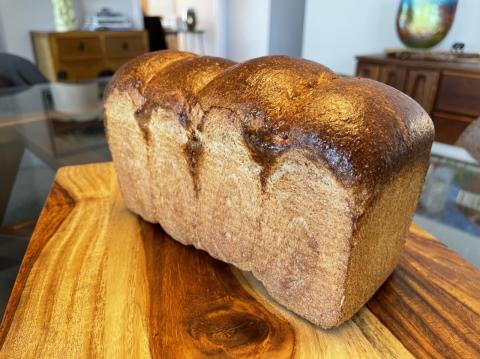 Super happy with the texture and flavour of this bread.  I’m not sure if it is the buttermilk or the Einkorn tangzhong, but this loaf is more tender and fluffy than other 100% whole grain milk breads I’ve baked.  The flavour of the buttermilk is scrumptious and the crisp buttery crust is yummy.

I baked this loaf without parchment in my USA Pans Pullman pan.  In the past when I baked without parchment the loaf got badly stuck in one of the corners of the pan.  I did a much more thorough buttering job of the pan and this is the first time that my loaf released from this pan without any parchment.  A nice side effect of not having paper lining the pan (other than the buttery crust) is that the swirled ends of the lobes rise more in the pan.  I’d say the buttered sides of the pan have less friction compared to the parchment paper so as the dough rises the swirls rise and don’t get stuck as much towards the bottom of the pan. 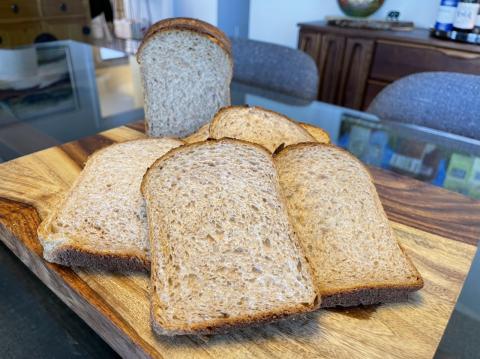 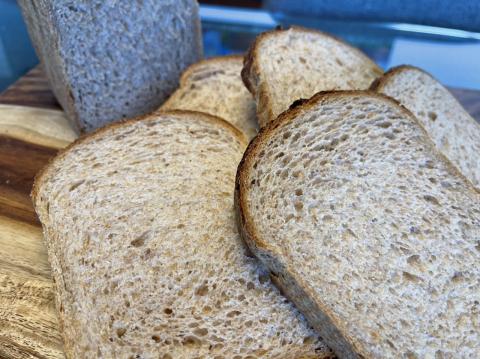 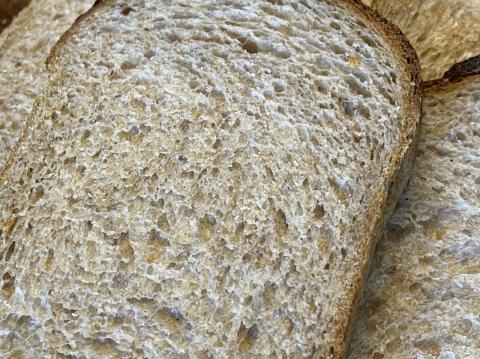 Very nice sandwich bread Doc, loving it, thanks for sharing this beauty.

Thank you Ming, I appreciate your comments.

I love buttermilk in everything! I have made David’s buttermilk bread a number of times. I am so glad your Pullman let loose 😊. The butter really does add so much flavor. One of these days I’ll get my act together and try this style. c

Thank you Caroline for motivating me to finally get some buttermilk into my milk breads.  I’m not sorry to have tried it.  The buttermilk appears to have the effect of making the crumb softer and even more fluffy if that is possible.  I’m so glad I tried baking without the parchment paper and with enough butter it certainly worked well, thanks for suggesting that as well.

Looks fantastic Benny.  Never would have believed that’s 100% whole grain crumb!  Do you use the milk breads for sandwiches or toast or ???

Thanks Troy, I’m often just toasting it and eating it plain.  We had some of this bread quite warm out of the oven with our dinner last night of steamed fish.

You’re far to generous AG, but thank you.

Another beautiful bake...looks like it wants to float right off the cutting board!  I can imagine how delicious it was with those flavor combinations, the einkorn and buttermilk complimenting each other.  I'm going to try brown sugar and a portion of einkorn in the next batch of 'everyday' rolls my crew likes...thanks for the inspiration!

You’re welcome Leigh.  I hope it works out well for you.

I’ve made many bakes with buttermilk as well and I’m a big fan.  This bake turned out great.

Thank you Ian, this is only my second bake I believe using buttermilk and certainly won’t be my last.