So with the success of my first vinegar a rose wine vinegar I decided I’d try making a fruit vinegar.  Raspberries were on sale recently and raspberry vinaigrettes are delicious so that made my decision easy.  Because I recently refreshed my 1.5 year old grape yeast water I decided I’d speed the first fermentation up by inoculating the raspberries with some about 2 tbsp of the grape yeast water.  So into a jar went the two containers of raspberries.  In a ratio of 500 g of fruit to 66 g of sugar, added sugar and enough water to cover the fruit.  You want to use a jar that will allow the fruit to rise quite a bit as they ferment.  I didn’t do this and lost a fair amount of the raspberry water initially until I transferred half of the raspberries and water into a new jar. 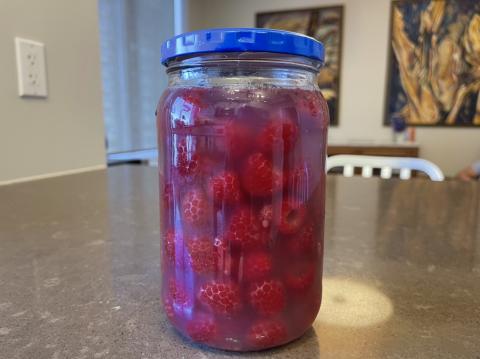 Within a day or two you will have vigorous fermentation of the sugars into ethanol by the wild yeast. 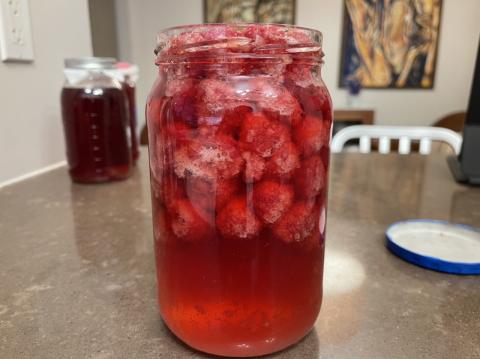 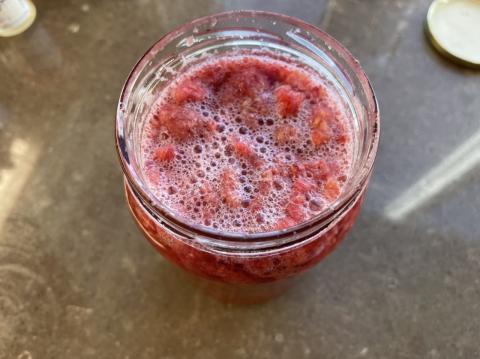 Next, swirl this daily until the fruit is no longer floating and bubbling, this indicates that the first fermentation is complete.  Another indication that this first stage is complete is that the water is clear.  Apparently for apple vinegar the water will never be clear so you cannot use that indicator as a sign of the completion of this stage.

The fruit solids are strained out and now the jar of raspberry wine is left to spontaneously start the second fermentation of ethanol to acetic acid.  This is an aerobic fermentation so you must allow the water to be exposed to air for this to occur.  I covered the jar with gauze kept in place by a rubber band.  The Acetobacter needed to ferment is naturally in the fruit so it is already there in the raspberry wine so this should start on its own.  If I had enough vinegar mother I could speed this up by placing the mother into this jar, however, I don’t have a mature vinegar mother yet so I’ll have to wait and see if this second fermentation will start on its own. 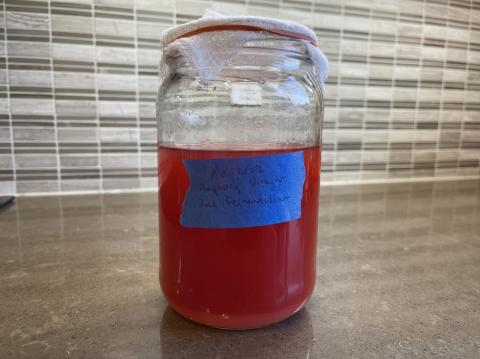 My index of bakes

Great post and very interesting...I really want to give this a try, so I appreciate the detailed info and am bookmarking this.

It sounds like the same process for YW, just taken a little further?  I can imagine all kinds of possible combinations and types of vinegar, which will be lovely this summer for some vinaigrettes!  The color on this one is divine!

EDIT: I keep forgetting to ask, Benny...what have your experiences with YW baking been?  Just curious!

I hope you give this a try.  This is my first time trying to make a fruit vinegar but what I posted is what I'd read in the book Vinegar Revival so I'm essentially following that procedure except accelerating the first fermentation by inoculating the fruit water with a bit of yeast water that I already had.

I have only baked once with my yeast water and haven't tried again AG so I have little to no experience with it.

Here’s my raspberry vinegar today.  The vinegar mother was very slow to develop and because I ran out of my first batch I added a tsp or so of apple cider vinegar to inoculate it with some Acetobacter to get the second fermentation going on May 25/22.  Today it is smelling nicely tart and has a healthy looking mother on the surface.  You’ll recall that the vinegar mother is a celluloid byproduct of the conversion of ethanol into acetic acid by the Acetobacter bacteria.  I have not been swirling the vinegar in the hopes of developing a nice mother that I can then place in the next batch of vinegar easily to kick start this second fermentation. 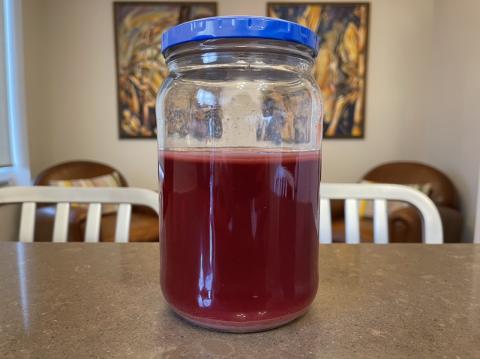 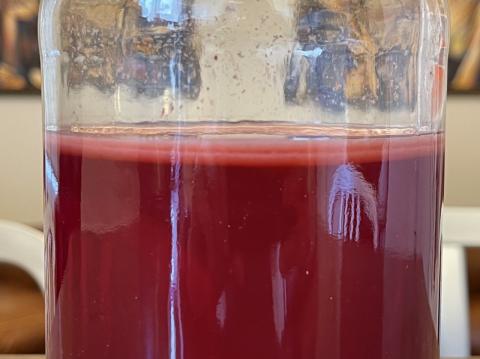 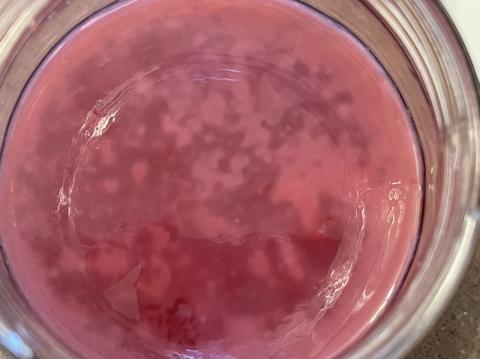