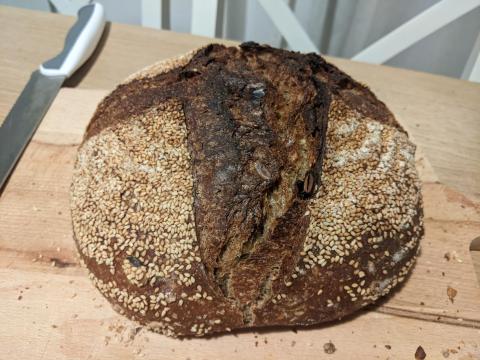 Continuing to enjoy the particular high extraction flour widely available here in Switerland aka Ruchmehl. It is very strong, holds a lot of water, and produces tasty and fluffy bread. Very non-white, but also without any grassiness or bitterness that whole wheat breads sometimes have.

This time I threw together some dough for two loaves using 110 g rye levain (1:10 grown during the day at 25C until doubled and then refrigerated until afternoon next day), some of leftover liquid starter (~110 g also, has been in the fridge for a long time) from the experiments following Rus Brot's "yeast-less" bread (which contained some rye schrot, red rye malt, active barley malt, and some raisins), lightly toasted and soaked 50 g pumpkin and 50 g sunflower seeds, and also a couple handfuls of toasted sesame seeds, with 800 g ruchmehl and water until good consistency, not trying to push the hydration, I'd guess around 75% accounting for everything.

I used warm water and kept the dough warm around 25C, but still was surprised how quickly the fermentation proceeded: the dough looked and ready in around 4-4.5 hours, despite the levain having been refrigerated, and the liquid starter had been in the fridge for 3 weeks I think.

Pre-shaped, shaped, rolled in sesame seeds, and final proofed overnight on the balcony, which should be around fridge temperature. The loaves visible grew by morning, and actually felt quite fragile on the verge of overproofing. Luckily I think I caught them just in time, they had decent oven spring, and great crumb. Forgot to take a picture of the batard-shaped one, here is is after cutting: 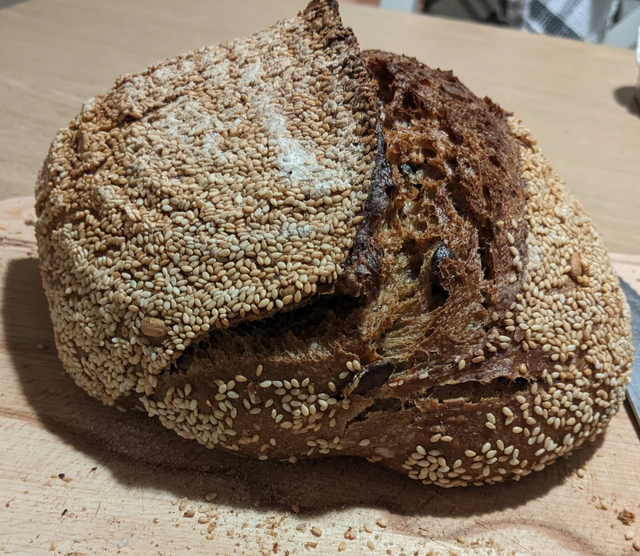 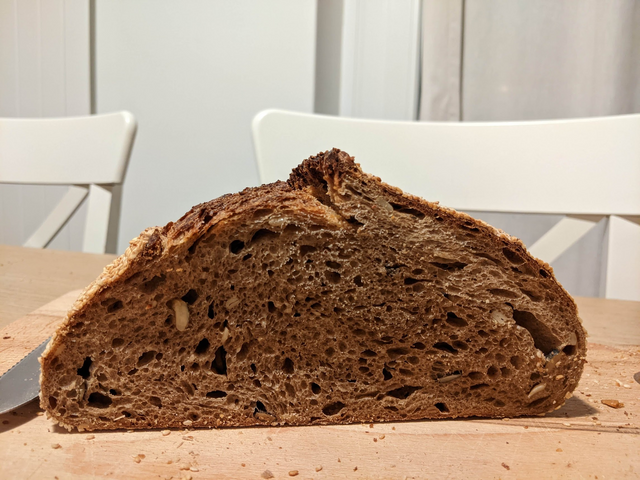 There aren't too many seeds in the crumb, but the pumpkin and sunflower seeds are quite large, so biting just into one gives a very nice nutty taste. The sesame seeds on the crust are as usual completely intoxicating. Crust is quite thin and crispy, crumb is soft and tender. There is clearly some sourness, more than I usually get, probably due to using refrigerated starters, in particular the liquid one. Not sure if it's visible in the photos, but I think even the tiny amount of red rye malt (less than 10 g) from the liquid starter darkened the crumb a little and gave a reddish hue, looks quite nice.

Anyway, I'm still very pleased with this flour, such a thrown together recipe, but the result is great. And nice to bounce back from semi-failed rye breads from my previous post.

Lovely bread, nice use of seeds and this flour sounds very interesting. Better stock up on the flour. Was reading online of flour shortages in Germany, not sure if the Swiss are panic buyers though.

I've heard about that too, and in Italy as well apparently... So far no signs of any shortages here. If I see a way to buy in somewhat larger quantities I might to it though, at least some white flour or this one...

That's an excellent crust and crumb, Ilya. Looks like a nice and hearty bread with rye flour, sesame and pumpkin seeds. This is a bread that's checking all the right boxes for me. Lovely bake indeed!

Thank you Abe! There isn't much rye in this, but since it was all prefermented I think it contributes some extra acidity and taste. I like the seeds here too, not too much so the bread is still fluffy, buy sufficiently present to give some nice pockets of flavour.

How wonderful Ilya, I can definitely see the red hue in the otherwise rich brown crumb.  Must have been quite delicious, nicely baked.

I know you also like the sesame seed coating, this time I painted the loaves with water before applying the seeds, and I think got a more dense coverage than usual, but not hugely so.

Yes you’re right Ilya, I love sesame seeds.  I do think that having the outside of the dough damp does get a better denser coating of the seeds and you did well with your seeds, nice and dense.

Looks good, Ilya. That Ruchmehl is so versatile; I must replenish my stock with the Shipton Mill version - but I am trying to be strong with flour purchases!

I'm sure the Solod will give an interesting flavour too.

Thanks Lance! Have you tried that Shipton Mill flour? Is that the Swiss Dark flour that Abe mentioned at some point too? I never saw it when I was back in Scotland, curious how it compares.

Yes, I have used it with success. I think I've done the odd TFL post using it. It will be the one Abe refers to as well - it's the only one you can buy in the UK.

Shiptons say it's based on bread flour with other fractions of the roller milling process added back in; I don't know how that compares with the Swiss versions.

Sounds good! Must be similar indeed. From what I understand, there is no standard on this flour, and different producers can have quite different products. I already noticed that one brand seems to work better than another from what I've tried. I think all roller-milled flour nowadays is made that way, by combining streams from the mill into different combinations...

I got to taste this bread in person and I can assure you, it's wonderful! As was spending an afternoon/evening with Ilya walking the city and talking bread and all sorts of other stuff.

Wow Rob, that’s awesome that you and Ilya were able to get together to chat and share some of Ilya’s amazing looking bread!  I was lucky in the same way this past winter getting together with Alfanso several times and having the opportunity to eat his amazing ciabatta.

It's truly amazing, Benny, that this fantastic online community can so effortlessly become an in-person community. The power of bread -- or something like that.

Thanks a lot for the comment Rob, I'm really happy you like this bread! It is one of the more successful bakes I've done recently :)

And was great of you to reach out and suggest to meet up, I had a great time, hope to meet again! Enjoy the rest of your time in Switzerland!

A great time indeed. I know we will meet again. And PS: thanks for sharing a bit of your prize cache of red rye malt. You've set my path: Now I have to go full Borodinsky.

I realized I should have weighed it and not just eyeballed it... Have you checked how much I actually gave you? I find it to be less dense than just flour, and I hope what I gave you is enough for at least one full bake!

OK! Should be good for a Borodinsky loaf with 500 g total flour, or a couple loaves for some other recipes (Borodinsky has 5% flour as RRM, but a lot of recipes only need 2-3%). Hopefully if you like the result you can find a source back in New York! There is a long discussion with links to different providers here: https://www.thefreshloaf.com/node/65993/red-rye-malt Recent events might make it difficult to source Russian or Ukrainian RRM though... Strange that the German one doesn't seem to be available outside the EU.

thanks, Ilya. I'll try the Borodinsky and, if I like it, I'll look for RRM in NYC or I'll hunt you down for a refill.

What a great meet-up! As you say, the power of the baking community.