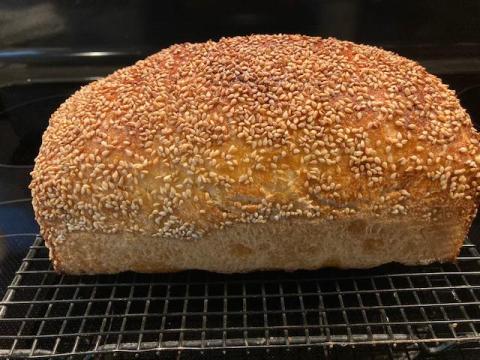 The learning continues.  Thanks to receiving a cornucopia of suggestions on my previous bake of the Bouabsa Pullman I moved forth and applied some of those changes, further upgrading my nascent Pullman pan skills.

Previous improvements over the first bake were documented in the linked-to post above.  I decided to move away from the IDY Bouabsa dough to a Levain semolina dough.  Rather than be a traditionalist and use a formula ready-made for a Pullman, I selected the Weekend Bakery Semolina dough.

One suggestion I did not follow through on was to score the top of the loaf.  The surface was so delicate at bake time that I was concerned about ruining the loaf.  Next time.

The loaf baked for ~33 minutes @ 430dF but still did not come as high as the loaf pan.  One "mistake" that may have been detrimental - I took the dough out of the overnight retarded BF container to cleave off the additional 550g of dough, and then placed the 900g back into the container to warm up.  I imagine this disturbed the dough somewhat.  I should have divided the dough into two separate containers after the countertop BF.  Lesson learned.

Overall I'm pretty happy with this bake and considering that semolina exhibits a relatively tight crumb, at least in my kitchen, I think the finished product came out just fine.  Considering the lower percentage of semolina in the formula, the flavor is a little shy of what I look for in a semolina bread.

Here you can see where the dough decided to score itself. 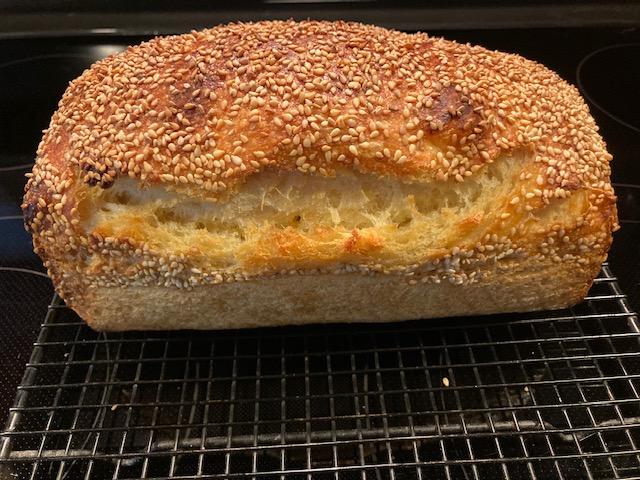 A view from the End Zone. 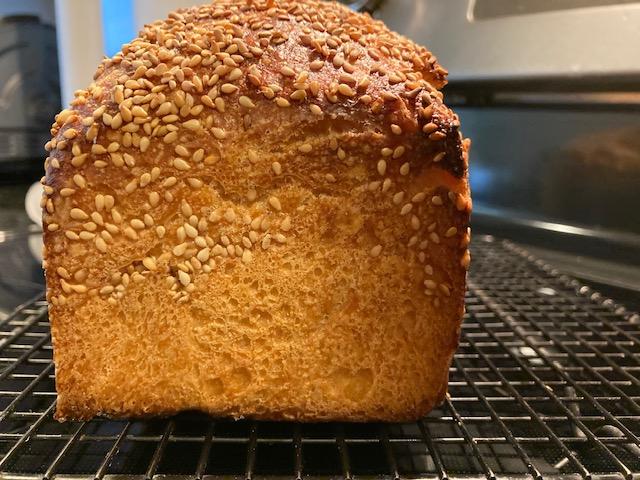 These 3 little piggies went to market. 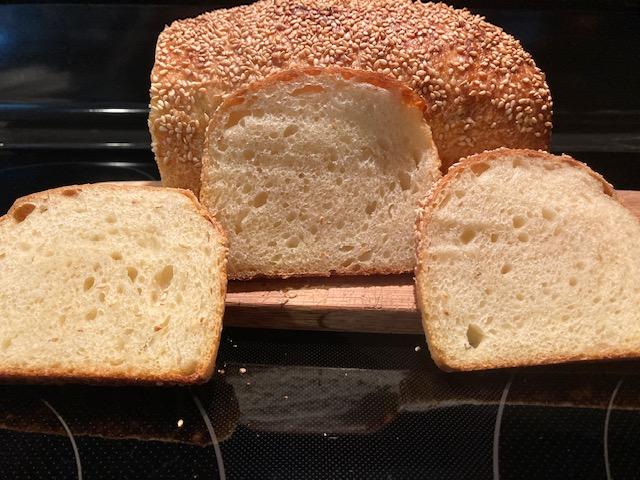 A relatively evenly distributed crumb with an evenly colored bake all around the crust. 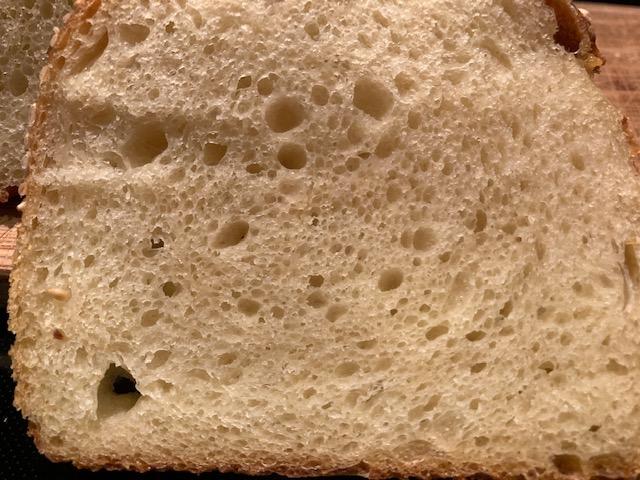 I think toast is almost always sexier than plain bread. 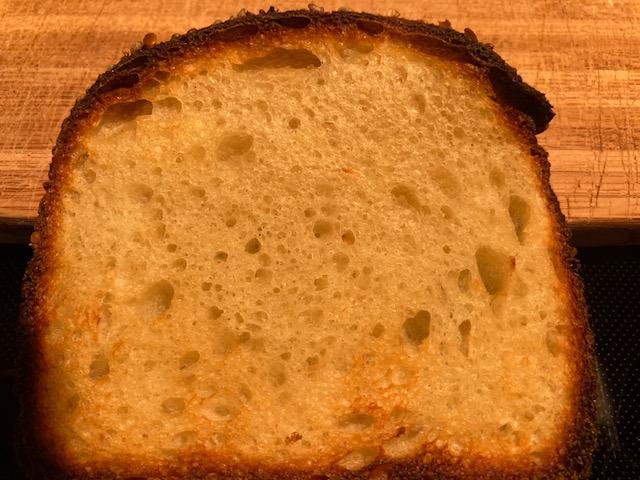 I am back home and winnowing through potential formulas to tryin the Pullman. Guess we need the next Community Bake to be about…. Yep Pullman loaves and all their iterations! I digress… will post something soon . c

to the value of group-think WRT my own minimal experience in Pullmans.  A downside would be the requirement of all participants to either own or cough up the cash to add one (or more) to their own armament.

Didn’t think of that and prices have really gone up . Oh well we shall have this as an informal subset ! 🙏

I think your oven temps need to be adjusted for pan loaves. The top is getting too crusty before the bottom can lift it. It would be better to tent it at the beginning of the bake. Most pan recipes bake at around 350F. The Approachable recipe starts at 425 but is reduced to 350 after 5 minutes. How a slice toasts says a lot about how it was baked. If the crust burns and the center doesn't toast then it needs to be evened out. I used to think of pan loaves as easy and reliable before I started making them but that is not at all what I have found.

from Mr. Hamelman's Bread.  He has two entries for Pullmans, both enriched, with baking temps at 400 and 430, no decrease in temp over the course of either bake

I had considered the 350-375 range to be what enriched doughs bake at, not thin doughs.  Could I be wrong?  Mon Dieu!  I suppose so, thereby taking Mr. Hamelman down with me?  I'll look into it and have my people get back to your people. I'll try tenting the dough up front next time, based on whether my diminishing memory banks retain it or not...

Love the feedback I'm getting!

How that I’ve read your post, after posting below, perhaps you are correct the lower temperature might be for enriched breads which most of my pullman loaves have been.

I used 375 the whole bake no stone etc. covered 35 min and uncovered 25 min. 1400 g dough pre bake weight enriched with the trinity. It’s staying so moist and the crust has retained its crispness after thawing. Very pleased

You've mentioned trinity a few times and I don't know what that is.  Help please.

You have missed out on the conversations surrounding some of my other bakes. Jon is privy to the secret trio. But since you are asking I shall reveal all. See you have me talking funny LOL !!  I picked up Danni's use of yogurt first. Then I also started adding honey. It was a slippery slope from their to adding Olive Oil  haha. I now add 25-30g of each ingredient per loaf in whatever formula I am making. I subtract that volume from the liquid, usually water, in the formula. Since my loaves are almost all 1000g each now because that increased size with the use of my graniteware roaster, insures I have lots of steam at the outset of the bake and therefore I get a great rise and crust. I usually have 2000g of dough. Therefore 25g eax3 = 75 g total  per loaf  so 150g total is  subtracted from the water in the 2 loaf formula. Since I have switched from 800 g to 1000g loaves I use the higher amount of 30g each per loaf =90 or 180g total.

Hope that makes sense. I also don't always use yogurt which is where the big discussion about using buttermilk came up a short while ago. I have no problems with using yogurt or buttermilk in any formula so far that I have tried. I only ran into trouble with overbrowning when using that much honey but I lowered the temp and solved that issue. Questions ???? These make a very enriched bread even though it isn't that much given the 2000g  quantity of dough. The outcome stays fresh so beautifully and the flavor is great.

Curious to know if you've ever tried coconut cream in place of the yoghurt or buttermilk?

what a great idea !! I would probably not use the olive oil then as the coconut is WAY fatter than buttermilk or yogurt. Would be good in a sweeter bread like a date nut or other dried fruit bread . Will have to think about this combo and see what percolates to the top.

that all is the Bronx coming out of you!

I agree with Don, most pan loaves are baked at 350°F throughout to avoid the top crust forming too early and then cracking open at the side.  That might be a change to make, lower temperature and longer more even bake.

Did you do anything to prevent the top crust from forming too early such as egg wash, steam etc?

I do like the more even crust colour all around that you got with this bake, I haven’t tried semolina in a pullman yet but will have to add that to my long list of things to bake.  Yours does look delicious Alan.

well, almost all 😈.  I think I'll try Don's scoring and up front tenting next time.  Nothing on the top except to roll the loaf on a wet towels and then a quick trip to the sesame seed bed before placing the loaf in the Pullman.

I came across this durum flour at a small international market, and after a suspect manipulation of the bag's contents, thought I'd give it a try.  Seems to be not quite as fine as semola rimacinata's baby powder qualities, but definitely much finer than the typical Semolina #1 that is usually the finest ground semolina on the shelves.  It was just dandy.

I like the way you got the seeds down below the sides. Nice Touch.

And the split on the top side -
This guy gets ears even when he doesn’t score. LOL

Definitely a step up from last time, even if these are baby steps.  A lot of baby steps add up - and so do the calories!

No mention of Pullman loaf pans with their lids ?  I have not even thought of doing so ! I make Hamelman’s  Toast Bread every week (with lids on) and get a consistent browning all over  @ 430F  for 30 minutes.  Now I will have to see what happens without the lid ! My results are the same when I replace 25% of the bread flour with WW flour.

Merlie, the great thing about Pullman Pans is their high sides. You get a tall slice. My USA bread pans are 2.75 inches high and the Pullman. Both large and small, are 4 inches high. Pullman Pans work equally well both covered and uncovered.

Since using Pullmans I don’t no longer care for the low sided bread pans.

Thank you for your reply Dan. I too no longer use my USA pans - except for banana bread ! The Pullmans are the perfect size for sandwiches or toast. I just wondered about the result without the cover.

Everything about this loaf is so appealing to me. Toasted sesame. That glorious colour. The holey crumb. Makes me rethink "sandwich loaves" for sure.

And still may not be vs. making a baguette or ciabatta, but it has its place.  Maybe like my teen years, just a phase I'm going through while I'm curious.  Still at the learning stage with these pans, and good to keep in my toolbox as well.  It only took until this third bake to get the gist of it.  And it definitely is a better vehicle for transporting jams and jellies than ether of my preferred breads, or when we want a softer traditional sandwich bread.

It also seems forgiving in the sense that we likely can put just about formula mix into the pan and perhaps "get away with it", as I did on this bake.  And now here  -> I had a ridiculously goopy formula for pizza dough yesterday, 105% hydration!, that was clear never going to work for me.  So I kept adding more and more flour to the mix until it was only partially goopy, threw it in the refrigerator for a few hours to chill and tighten, formed the dough cold in just the same manner as for this semolina, and dropped it in the Pullman to warm up and proof.  Not expecting much, but this is the way it turned out 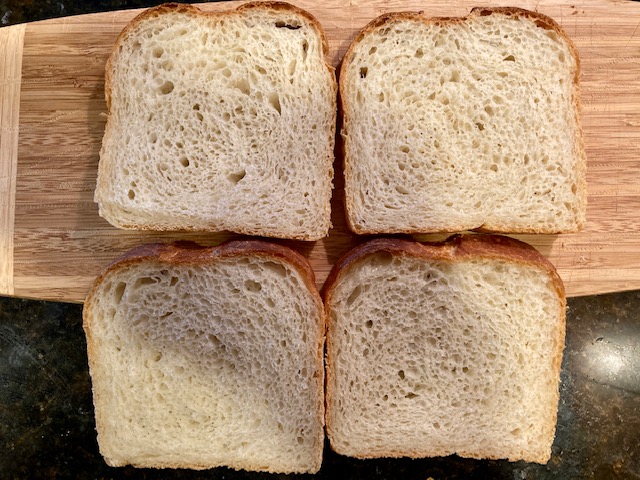 Consider trying it for a change, as I did.

For me, that is perfect crumb.
Hard to beat pan loaves if you don’t mind the structured shape.

AND Pullman Pans are the absolute best (whether covered or not) because they have high sides. Typical bread pan sides are considerably lower.

only 650g of dough with olive oil, sugar an 0.8% IDY.  Even from cold, the proof filled up the pan and was ready to bake in about 90 minutes or so.

This was Adam Ragusea's formula for Pizza dough, and just checked again - starting point is 105% hydration.  So I just gave up on it.

This one you scored the top right Alan.  I agree with Dan, the crumb looks great for this type of bread.

But it was pretty feeble.  The dough was so highly hydrated to start, and after proofing became incredibly delicate by oven time, but I figured this was otherwise a toss in the trash bin dough, so why not get one in under my belt.  Once scored, and it was difficult to get the blade through the dough, I relied on Doris Day's Qué Será Será (from Hitchcock's The Man who Knew Too Much remake).