It is time for another two pizza nights as it had been some time since our last pizzas.  If you haven’t tried tuna on pizza you owe it to yourself to try it.  Make sure you buy good Italian tuna in olive oil, not the North American canned tuna because the Italian tuna is so much better.  Since trying it several years ago I just can’t eat other canned tuna anymore, they are just lacking something in both texture and flavour.

(1) In your mixer bowl(or by hand) dissolve the Starter in all of the Final Dough Water except the HOLD OUT Water.  (Add diastatic malt too)

(6a) Allow to ferment for 1 hour before proceeding to (7)

(11) Stretch the balls into your desired size.  Top your pizzas, brush the cornicione with water then roast at 550F (as high as your oven will go) until the crust is browned and the cheese has melted. Spin the pie at least once to avoid burning due to oven hot spots.

(12) I bake in a preheat cast iron skillet that heats in the oven while it is pre-heating.  I set the oven to roast and bake the pizzas in the cast iron skillet on my baking steel so that the skillet is quite close to the top of the oven.  It only takes 6 mins to fully bake my pizzas.

I like to top with grated low moisture mozzarella cheese, then top with the marinated mix vegetables.  I used a combination of artichoke hearts, sun dried tomatoes, roasted red peppers, hot banana peppers and Kalamata olives.  I tossed these in a bowl with some cracked peppercorns and a little red wine vinegar and make sure I give each handful a squeeze to rid them of excess liquid before putting them on the pizza.  The tuna which has been drained and loosened in a bowl is placed on the pizzas last in small clumps prior to baking.  I had some left over parsley that I sprinkled on the pizza prior to slicing.  I often like to put something on the pizza that isn’t baked for some contrast. 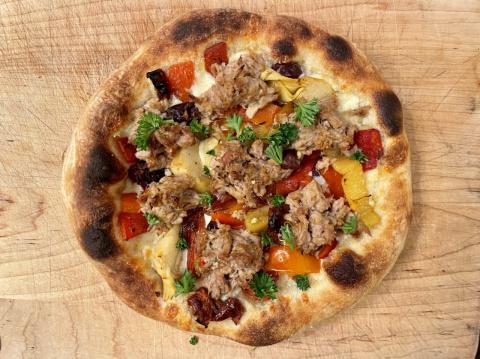 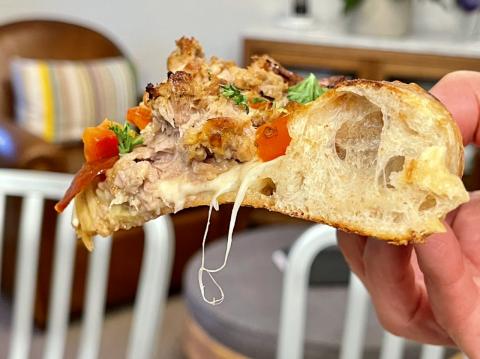 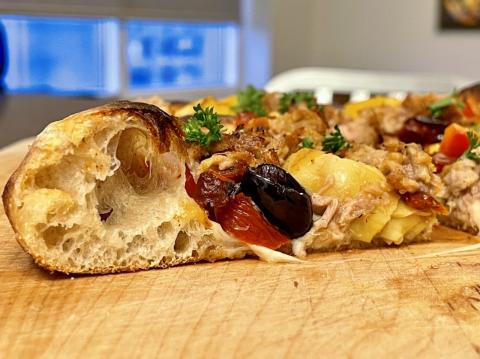 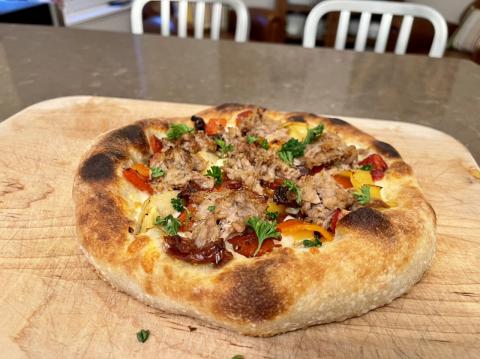 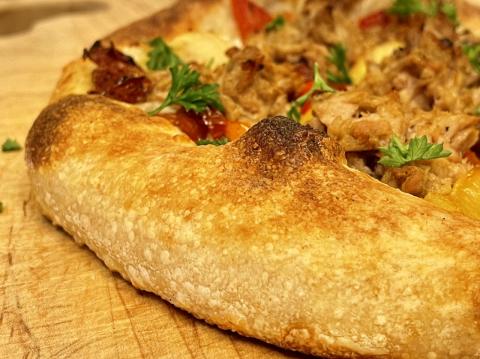 A really nice pizza! And I’m very glad thar someone else likes tuna on pizza!  My first experience was in Sicily where I had pizza tunno e cipolla (tuna and onion). There was a very thin layer of a light tomato sauce, probably fresh or uncooked, with caramelized onions and chunks of tuna. It is my favorite and I make it whenever I make pizza. I caramelize an entire yellow onion for a 10” pizza. Try It!

Yes I love tuna on my pizza and it’s great that you do as well.  Someone commented on IG that tuna and onion on pizza was called pizza pugliese, I hadn’t seen that name either.  I usually include either onion or shallots on this pizza but forgot this time.  In the end this was so heavily topped adding anything else would be gilding the lily.  I do like the sounds of the caramelized onion and a thin layer of tomato sauce (always raw) and the tuna, that’s gotta be delicious Brad.