My final bake of 2021, a bit overproofed I’d say based on the bit of spreading. We’ll see when it is sliced, it could also have more hydration than the flours could take, that is another possibility to explain the spread. Without the porridge the hydration is 80% with the porridge the hydration is over 100%.
Unfortunately I didn’t weigh the grains, black sesame seeds with the water and milk in the pot prior to cooking them, so I don’t know what the final weight was since I had to add quite a bit more milk to compensate for the water cooking off. 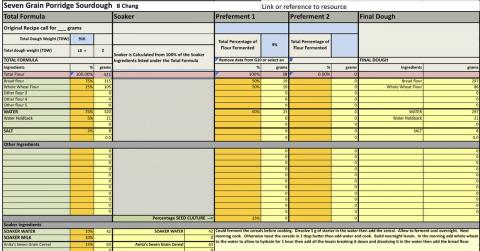 The levain is put together prior to bed and allowed to ferment at 76°F.

In the morning, the whole wheat flour is added to the water and salt to dissolve the salt and quickly hydrate the bran in the whole wheat. 30 mins later when the levain is at peak, it is added to the slurry and the levain is broken down as well as you can with your hands or a silicone spatula. Next the bread flour is added and mixed. After a brief rest slap and folds x 150 were done to start to develop the gluten. Next the dough was placed back into the bowl and the hold back water was added and Rubaud mixing was done until the dough fully absorbed the water and there was good gluten development. After a 30 mins rest, the porridge with black sesame seeds were added to the dough through a series of stretch and folds until it was well incorprorated. The pH at this point was 5.48. The dough was moved to the proofing box to ferment at 80°F.

While the dough chilled, the oven was preheated and setup for open steam baking at 500°F with the cast iron skillet in the oven. 30 mins later boiling water was poured into the loaf pan with Sylvia towel in place and moved to the oven. Once the oven reached 500°F the dough was flipped out of the banneton, rice flour was brushed off and the dough was misted with water. Dark cocoa was then sprinkled on the dough. Excess was brushed off and then the surface was rubbed with a hand to create a thin paste. Water was once again misted on and once again rubbed in by hand. 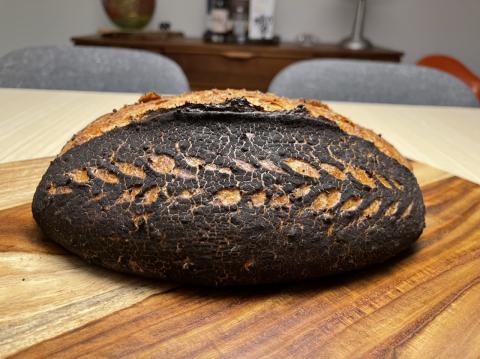 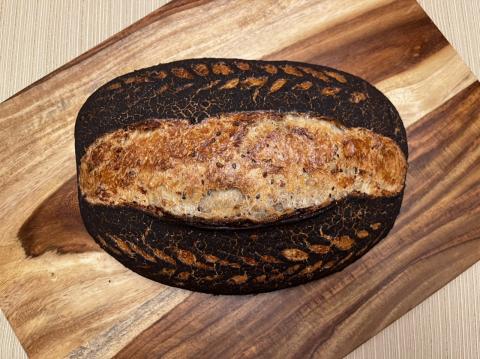 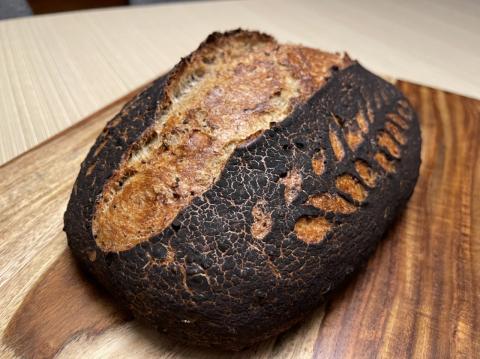 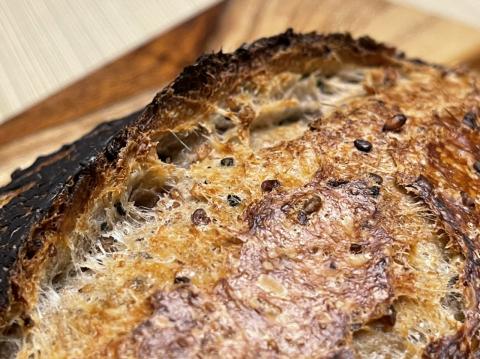 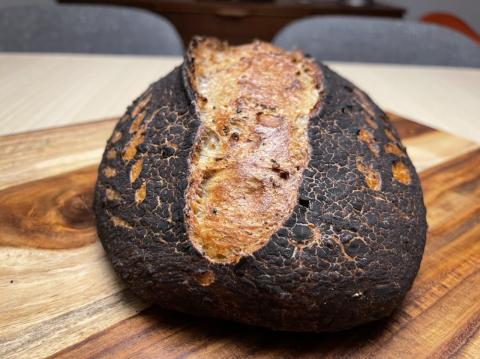 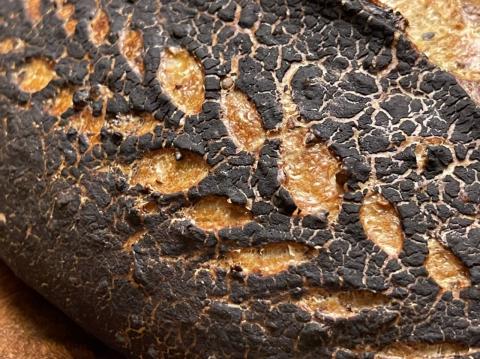 Amazing aesthetics on that crust.

I've made black sesame cakes (toasted the seeds, then food processed them with honey to make a paste to incorporate) but not used them in bread. I have a big bag so I should try. How's the flavour?

Thank you David.  I’ll slice this loaf tomorrow so cannot comment on this loaf.  However, I can say that black sesame seeds are probably my most favorite of all the inclusions I’ve added to bread.  You must try adding them to your bread, you won’t be sorry. Despite the spread of this loaf, I don’t see overt signs of overfermentation. Perhaps I didn’t develop the gluten sufficiently combined with maybe a bit too much hydration for the flour. That said, it is quite delicious, I love the extra flavour from the black sesame added to the seven grain porridge. Looks like some glorious, glistening crumb there Benny!  Haven't tried black sesame in my grain mix yet (currently just using white sesame) but I'm sure it is a tasty addition.  Happy 2022!

Thank you Leigh, if you like sesame flavor then adding black sesame to your grain mix just amps up that flavour.

Thank you David, that is very kind of you to say.  We used this bread for turkey sandwiches with cranberry sauce and stuffing left over from Christmas and it was tasty.

so it's not overfermented. Totally great, if you ask me.

I agree it’s not overfermented after all, perhaps a bit too hydrated and not enough gluten development.  In the end it turned out better than expected when the crumb was revealed.

And that crumb is beautifully open.