I followed the recipe exactly, substituting 1.33 Tbsp of Fleischmann's ADY for the preferred 1 Tbsp SAF Gold.

I used my new Ankarsrum mixer to mix everything up, and then develop the dough (went about 9-10 minutes.) 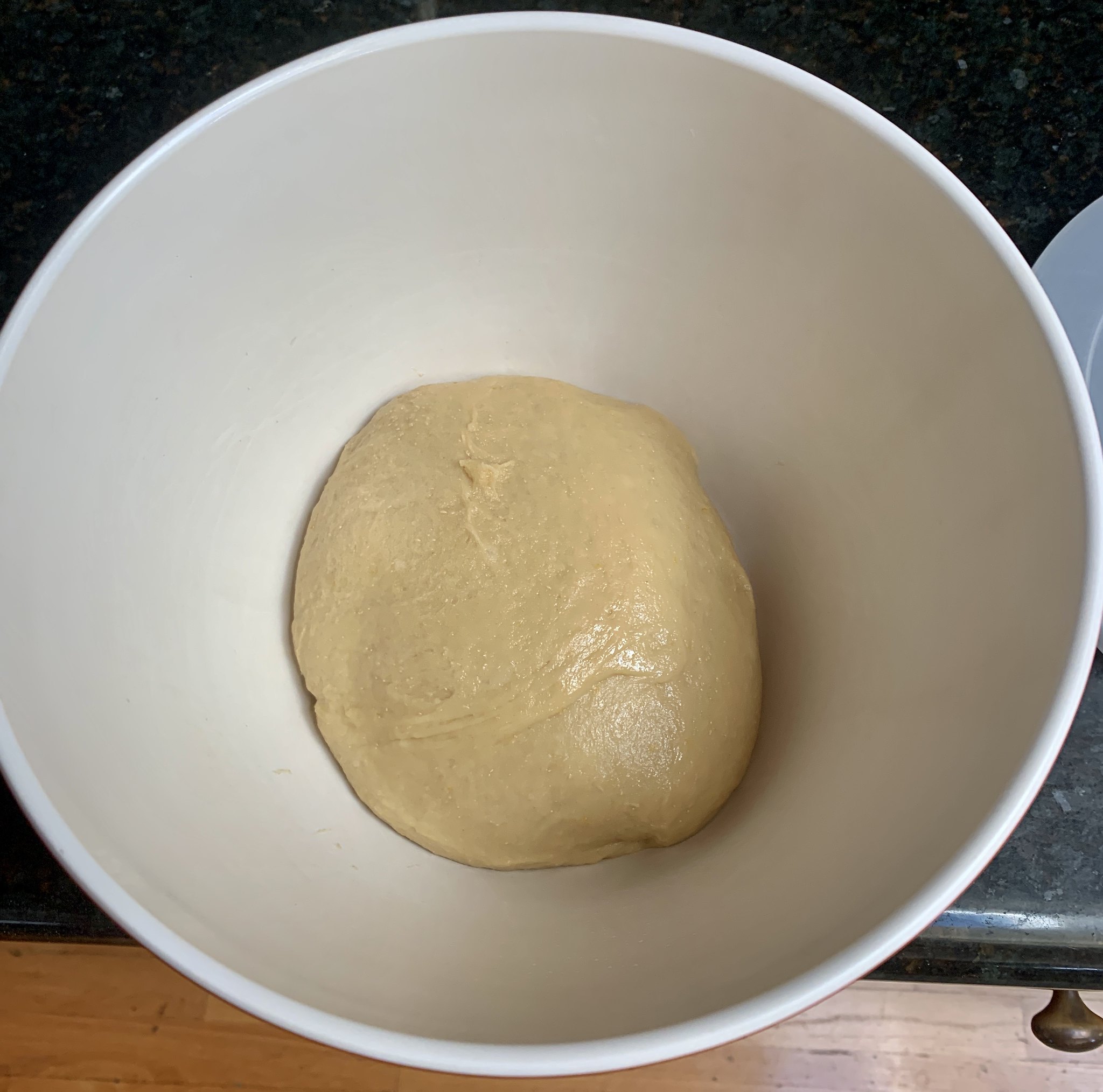 After about 2 hours, it seemed like it had puffed enough (kind of hard to tell from the photo) 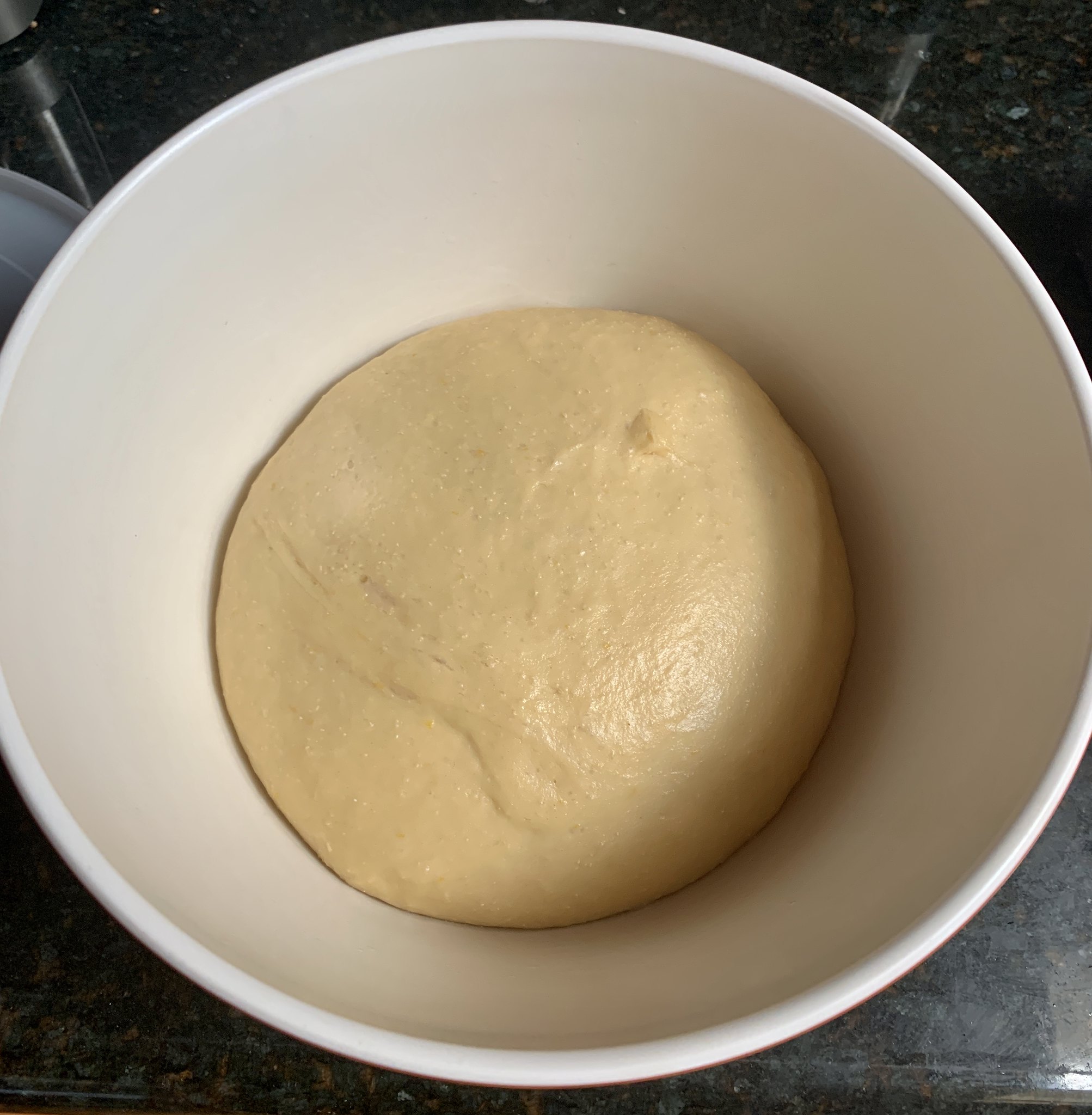 I deflated the dough, then roughly shaped it into a square, as I decided to use my 8x8 brownie pan (USA Pans) instead of a 9" round.... 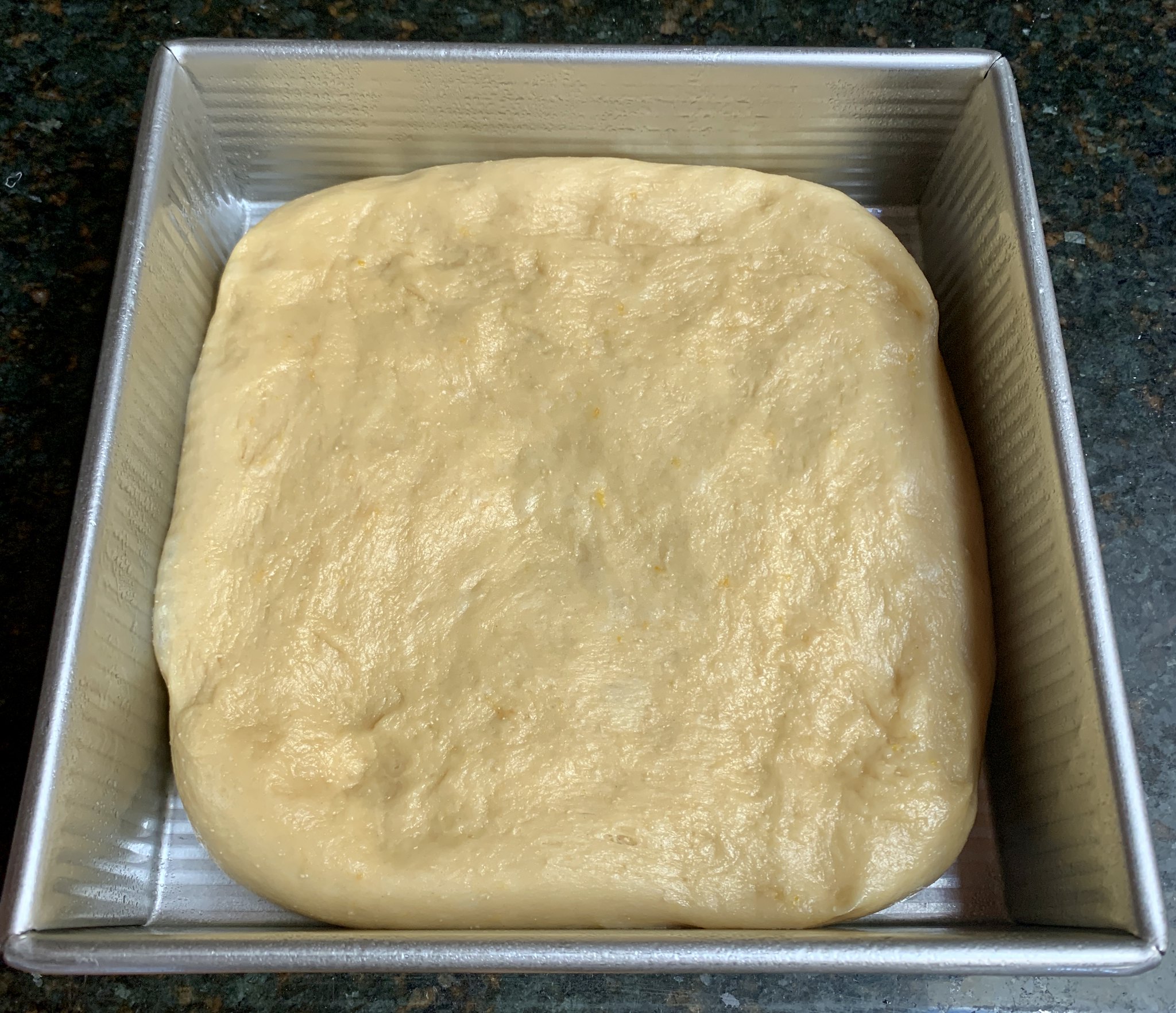 A couple hours later, the dough was just below the rim of the pan, so I popped it into the oven to bake 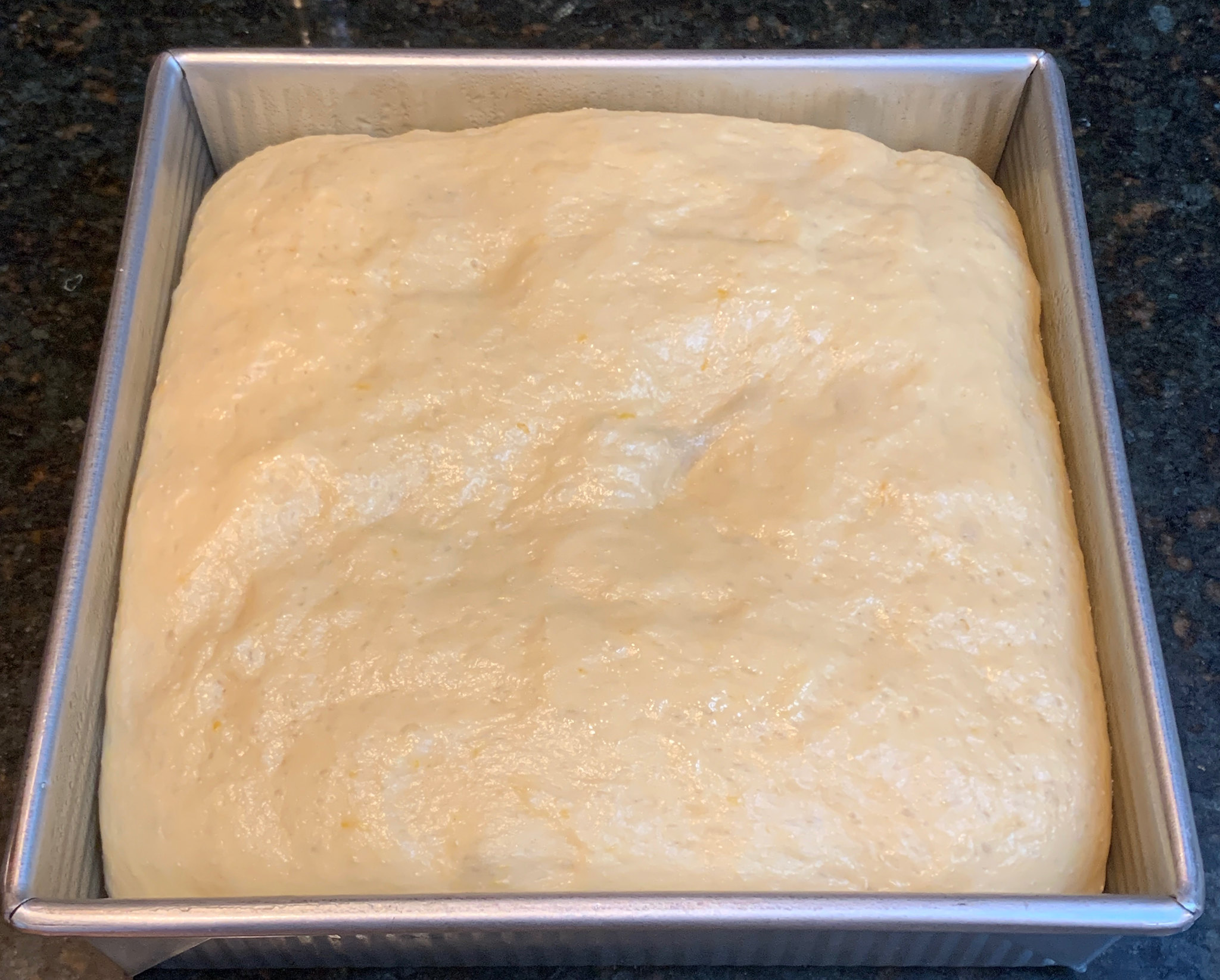 After the 40 minutes called for in the recipe, the top of the bread was still a bit pale, so I hit it with Conv Bake for five minutes, and it came out a lovely, deep brown/mahogany 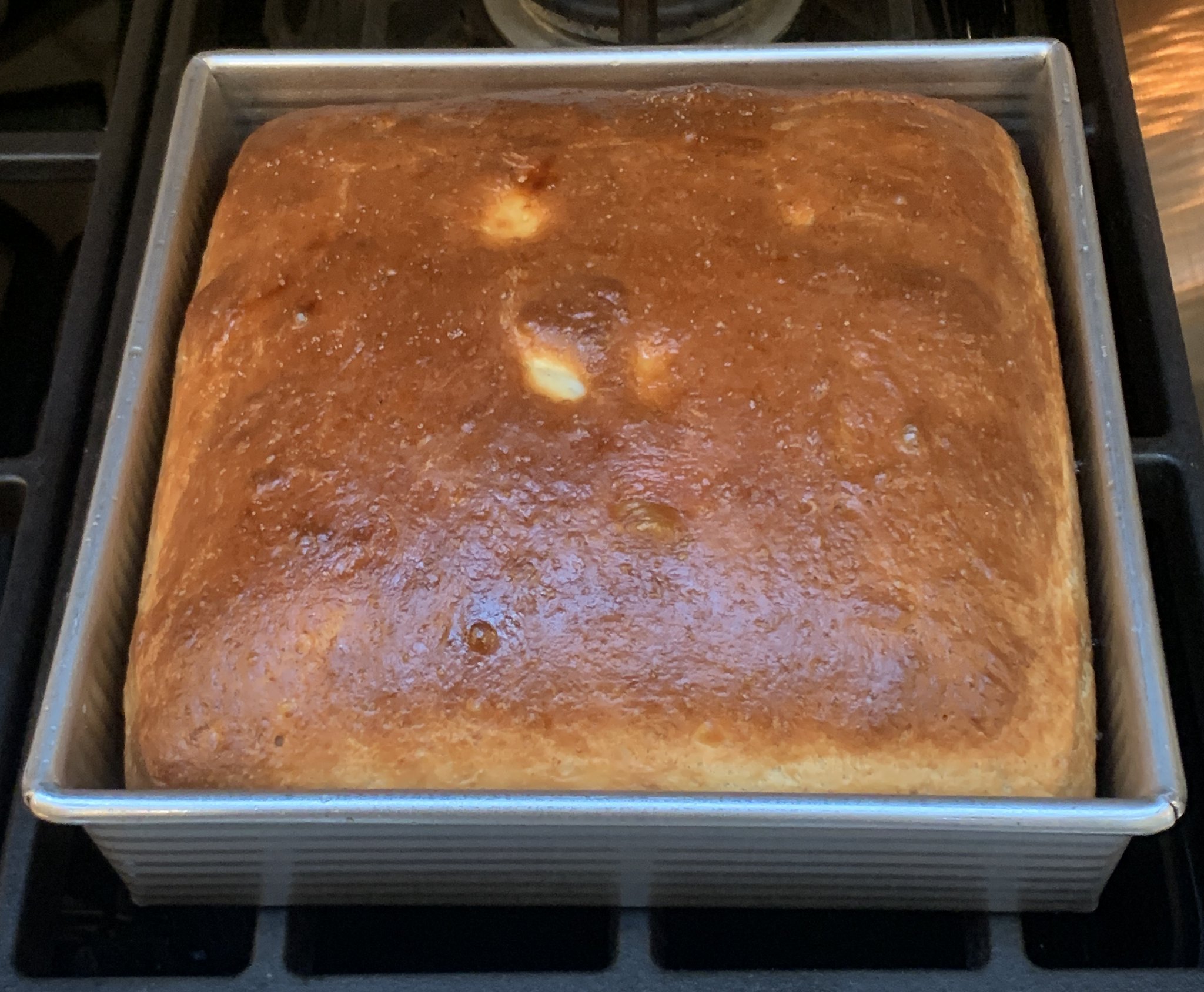 I haven't cut into it yet, so I'll have to update with a crumb shot later.  It smells deliciously sweet and lemony, and was pretty easy to make!

That shiny crust looks so inviting.  We need scratch and sniff don’t we here on TFL.  Maybe Floyd can get that going with the next website update.  Nicely done Rich, can’t wait to hear your review on the flavour.

I'm not sure I've done the egg white/water wash on a bread before, but I agree, it makes for a very shiny crust!  Adding crumb shot and flavor comments below.....

The raw dough looks exactly right to me. Just like a typical brioche.

I am contemplating a Star Braid, similar to the Chocolate Babka using the Hawaiian Sweet Bread dough. Maybe filling it with a cream cheese lemon and/or orange zest concoction. What do you think? Pros & Cons?

Eager to hear your texture and tasting results.

Thanks, I think it turned out well.  I am adding crumb shot and flavor comments below......

The bulk was 2 hours @ 75F, and the final proof was just a bit over 2 hours @ 75F.  It seems like the yeast performed pretty well, though I won't really know unless I do the same recipe with the SAF for comparison.  Also, it's worth noting that the KA recipe is less sweetened than the formula you posted, so that could have an impact as well.

The lemon was just right in my opinion.  Contributed a very nice aroma when slicing and toasting, and was the right level as a flavor component when tasted.  Not overpowering, and not too subtle.

I had contemplated braiding this dough, but decided since I've never done that before that I'd just bake it up in a tin and play with braiding next time.  Your filling idea sounds yummy! :)

Ok, so I cut into this loaf this morning for some toast to go with my coffee.....

This bread is incredibly light, soft and tender!  It crumbles a bit when sliced, and, not having made this before, I would even say that it seems like perhaps it is a bit dry?  The lemon zest comes through with a nice aroma that is very present while slicing the bread, and a bit more so as it is toasting away (note to self, turn the toaster down a touch.....sugar!) :)  The lemon flavor comes through nicely when eaten.  I buttered my slices this am, but I think they would be better served with some jam, preserves or marmalade.  Here are a couple of pics: 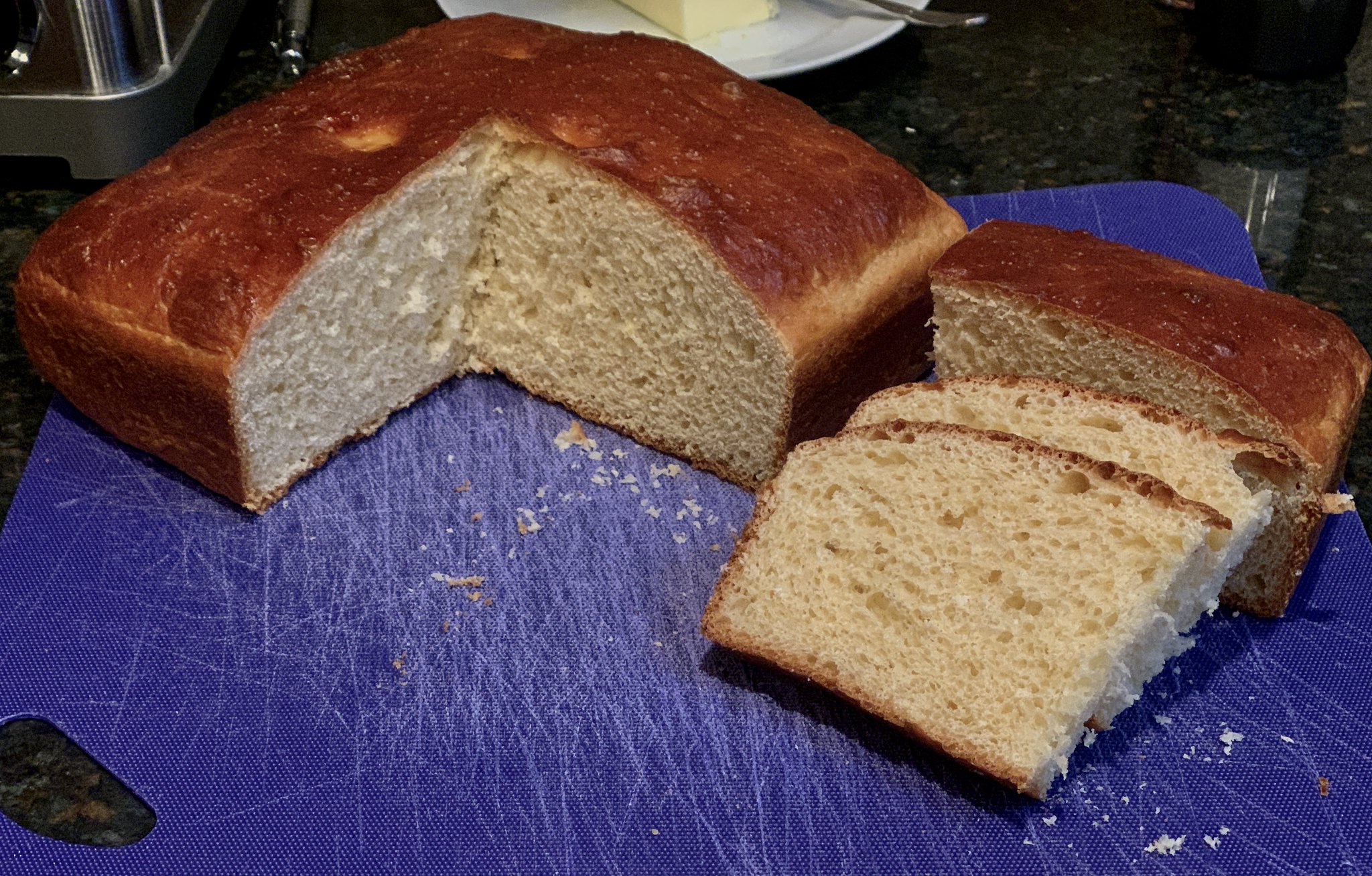 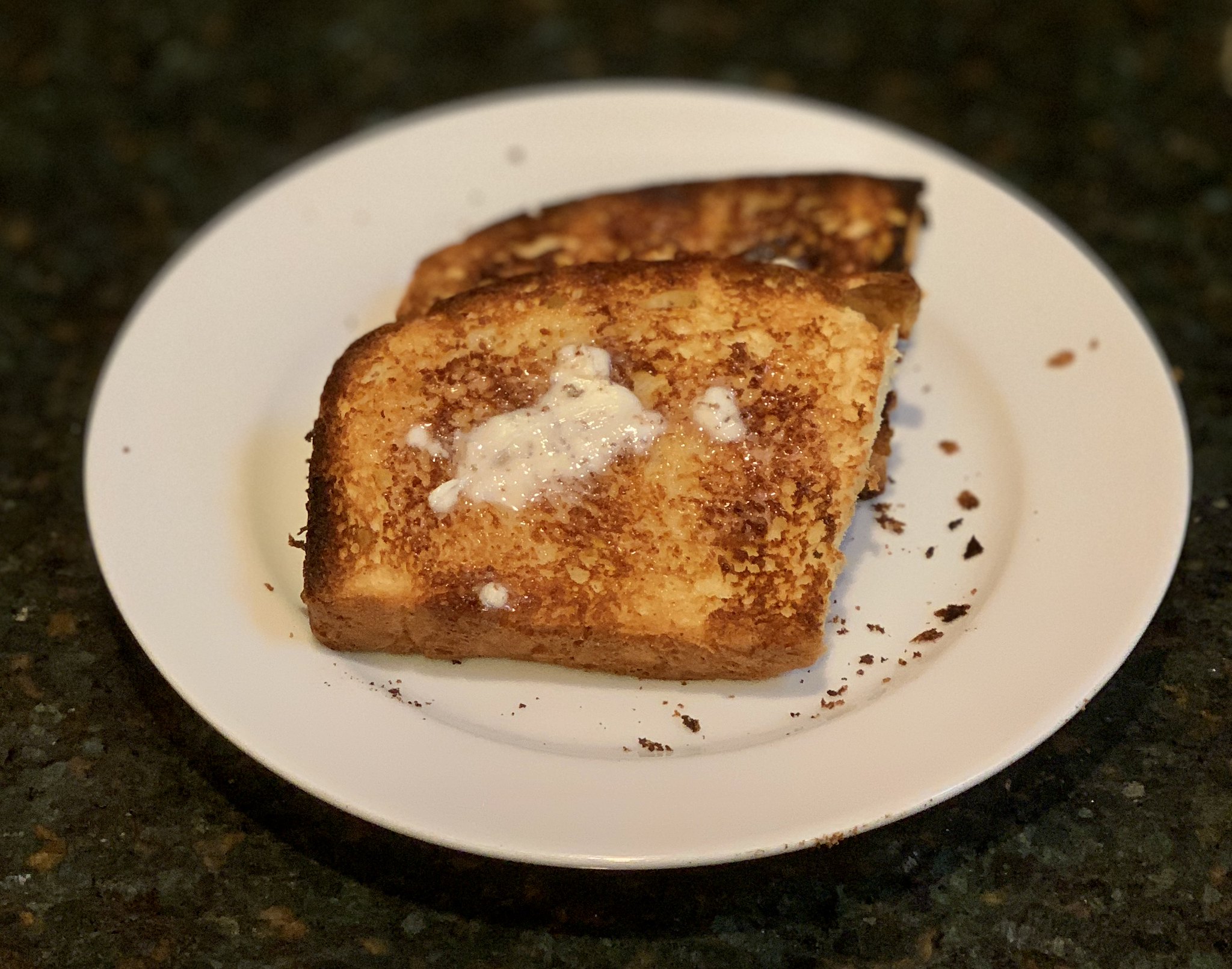 After trying this formula from KA, it makes me want to take a run at the original formula that Dan posted in the CB, so I'll work on gathering up the components for that.....might make a very nice entry to the Xmas table, and with this one under my belt, it's not that daunting of a process to get done while I'm also making up a roast and some mashed 'taters! :)

Thanks for getting me started on this, Dan.  Enriched breads were the primary reason I wanted a mixer, so this was a good test!

Sounds like a delicious successful bake and first use of your mixer Rich, nicely done.

Del cautions and I agree that over baking will dry out the slice.

Since a large percentage of yeast is used, this bread is subject to staling. At a minimum keep it sealed in a bag when on the counter. I experimented with par-baking and freezing the loaf. Was not happy with the results. Some of the sweetness was lost as was some of the fragrance. Best thing I’ve found for this bread is to freeze (whole or sliced) and when ready to eat defrost in sealed bag on the counter. With this method I fond no loss of texture, flavor, or aroma. Either toasted or just buttered is maintains it original state.

For others that have not had this type of bread, the benefits of it’s aroma can not be over stated. The olfactory sensations of this bread is extraordinary.

Rich, did you cream the sugar and butter for the bake? Del recommends it and the Ank with the whisk attached does a phenomenal job!

Hey, Dan, I should have taken a loaf temp before I hit Conv Bake to brown the top.....possible I was already done at that point, and aesthetics be damned it should have come out.  I do have it sealed in a plastic bag, and we'll eat it up quickly so I'm not worried about staling.

I did not cream the butter/sugar, as the KA recipe didn't call for it.  When I do Del's version, I definitely will do that if for no other reason than it will give me a chance to use the whisks on the Ank! :)

This was a tasty learning experience!

Rich, in reviewing your images again I’d bet that your bake would have risen more if -

The rise on Del’s bread (using Osmo) is super high. Although your crumb looks nice for brioche.

OH! This is great dough for hamburger and hotdog buns. Barbeque and Sweet Bread are made for each other.

This particular loaf would not be good for buns.....it would fall apart too easily.