I wanted to share my third sourdough attempt and I'm always happy for suggestions so I can improve on my next attempts :)

My first two were with my first, rye starter in the previous year.
This year I've made a new starter, this time I'm feeding it with AP white flour (cca 21 days old - was really slow).

I had a lot of trouble with my previous attempts using AP flour - the dough at 70% hidration was very liquidy and wouldn't hold shape. Now, looking back, I think it was the rye starter that was too acidic, since the dough seemed to turn for the worse after adding starter, or it could be because I used AP flour that can't absorb so mich water.

Starter took around 8,5 h to peak. Autolyse for 3 h.
Then I did some slap&folds to incorporate the starter, 25 min later added salt and preformed 2 min slap&folds. I did coil folds every 30 - 60 min, about five times. The dough was really slack and didn't hold shape for long after folding. I think it started holding shape longer after the last coil fold. But because I was afraid of overfermenting my dough, I decided to do the final shaping after 5,5 h from adding starter.
It was left to cold proof 18 h at 5°C. From the pictures it looks like it puffed a bit during the cold ferment.
After shaping/before cold proof:

I'm still unsure whether the dough has proofed long enough - I did the poke test once I took it out of the fride, but I couldn't decide whether it was done proofing or not - I made a video, please help me determine.
VIDEO
The dough loosened a bit after scoring - which must mean the gluten wasn't strong enough? Link to picture
Baked at max (230 + ventilation) in Dutch oven, lid on 20 min + 25 min at max without ventilation and lid off. (Probably could have baked longer?).
I was overall pleased with the loaf, it had a nice taste (although I'm not sure it tasted sour at all xD, but it was really good) with crunchy crust. I'm including some pictures of the dough in the proces and the final result.
I wish the crumb was a bit more even - I probably have to practice shaping more, or maybe I was too rough with coil folds or needed more time to bulk?

Here's an update from today.

I sliced another ..well, slice today, and found a huuuge cave in my bread. Judging by the colour and location, I'm guessing it's from my final shaping.

Colour - I can see darker colour (I used buckwheat flour for dusting since I didn't have any rice flour) in "the cave" so I'm guessing it's from when I made the final roll when shaping the loaf.

But there's a lot of uneven bubbles in my crumb, and the smaller ones are really small - is this a sign of underfermentation? 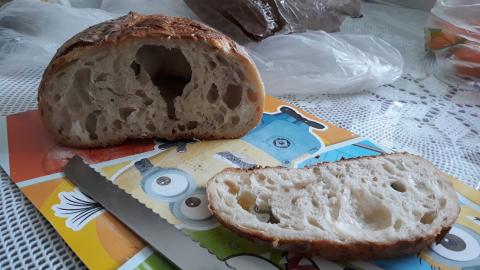 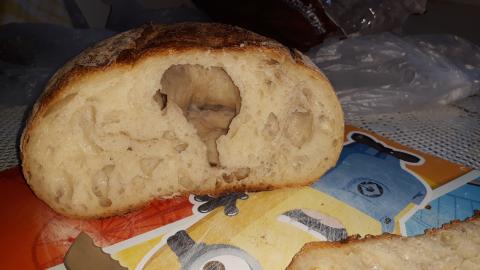 3 hour autolyse is pretty long. Depending on the enzyme content of your "Manitoba" flour and the temperature of your kitchen, you might be damaging your gluten in the long run. If you want to soak whole grains to soften them, you can always do that separately then add in to a shorter autolysed AP flour.

See this article on TPL:

I do like a long saltolyse where everything is improved The salt prevents unwanted fermentation and degradation of the dough enabling an overnight "autolyse". I still keep it at room temperature (21°C) or lower and if very warm then perhaps the fridge would be best. The aroma while baking and the taste is excellent.

Thank you for the referenced article happycat. Interesting read and I've only read the intro. Now I'm going to read the rest of it. Love learning new stuff about sourdough baking :)

It does look under fermented. You might wish to look at your starter. A feed of 1:1:1 shouldn't take 8 hours to peak unless it's quite cold. With your starter taking 8 hours to peak with a small feed that either indicates a sluggish starter and should give you an idea that your bulk might need more time yet you played it safe. You mentioned your starter is new and it might need more time to gain in strength. For now i'd recommend a no frills recipe that's low hydration and a return to the old fashioned method of kneading till full gluten formation and allowing the dough to double for an all white flour dough. Keep it simple!

Starter Feed: 1:2:2 and use when peaked or just beginning to fall. Should be bubbly on top and have a nice aroma. Do this over night and you're looking at 8-10 hours but how ever long it takes!

Brotkraft is a professional baker who chimed in to TFL a few times a year ago.  He endorses a 3 hr. autolyse, and you can read the exchange with me here.

I tired it once or twice, maybe more and the results were quite good, including one posted in that same thread.  I'm not the one endorsing it, just reporting the news.  Successful bakes can be accomplished with no autolyse at all, but a more typical time frame is 20-30 minutes.

I make an 80% PFF ciabatta which has no autolyse.  The esteemed Jeffrey Hamelman publishes formulas which vary from no autolyse to between 20-60 minutes.

We start with guidelines - a published formula, and then use our previous and newly gained experiences to guide us on how we best think we can achieve where we would like to go.  It can be an endless game, but one where we may comfortably reach a level of satisfaction with some patience, knowledge and practice.

That  Jeffrey Hamelman might not include an autolyse for one of two (or both) reasons. He is old school and autolyse is a relatively modern technique. Or because he typically uses a high percentage of preferment which has been "autolysed".

Just a guess. Hopefully an educated one. At the end of the day it's whatever it takes to get the results you're after. I have been trying a saltolyse (as you can see above) with very good results. Don't even think it's a recognised term [yet!]... but it works very well indeed.

I did the 3 h autolyse "by accident/ chance", since my starter took so long to peak.

Btw, lots of people say use starter when it doubles, others when it peaks. My starter probably doubles in 5 h, but it takes 8 for it to peak then it triples.

Should I wait for it to raise as far as it will until it peaks (even if it triples/ quadruples) and use it then, or use it as soon as it doubles?

You are quite right in recognising the seemingly conflicting advice. However when one is starting off it's a good idea to follow the golden rule before breaking it. There's more than one way but where to start if one doesn't have the feel for it yet? That's what recipes are for. Something to follow and gain experience with without having the ability to gauge a dough at different stages. Hence the more specific guidelines.

If a starter doubles but doesn't peak it'll still a leaven dough if given enough time with some slightly different results. That's the very basic explanation. But right now, just like all of us when starting off, you need a point of reference. Allowing it to peak means catching it at the height of its activity allowing for more predictable results.

About the feed amount... 1:1:1 or 1:2:2 are both fine as long as they're used at the optimal time. I only picked up on your 1:1:1 feed not peaking within 6 hours as a sign for it being a bit slow and should have been a guide to expect the bulk ferment to take longer.

Keep the recipe simple, hydration low and take out any variables that might throw you off. Allow the starter to peak, knead till full gluten formation at a hydration which makes the dough easier to handle and wait for the bulk ferment to double. This should hopefully give better results with less room for not gauging the ferment properly. Practice, practice, practice and you'll have lightbulb moments and eventually it'll become second nature. It takes time.

P.s. With most of the photos your bread looks very good. The one with the crater does look like a shaping fault more likely however it's also the crumb around the hole that makes me think under fermented. This one loaf tells two stories. Might mean it wasn't far off from being on target and only needed a bit more time with more care to not introduce gaps into the shaping while also knocking out the larger bubbles.

Thank you, I'll try to take all advice into consideration and do better on my next bake.

You were right about the starter btw, it started acting kind of sluggish as soon as I started feeding it 1:2:2 (a couple of days).

I'm glad it was able to make the previous loaf of bread though. Not sure how to move on from here..should I start feeding it 1:1:1 again until it gains strength? Should I discard or just add new flour and water?... I've read and seen so many videos, but my starter just doesn't want to cooperate like the rest of them it seems... I'm feeding AP flour. Currently 24h schedule,  since it takes so long to peak and fall.. oh well, I'll keep on trying

Best course of action, I think, that no matter what you feed it wait for it to peak and feed again. Should it peak at a time when you aren't able to feed it again straight away, like in the middle of the night, then feed again at the first available opportunity and next time feed more if you see it'll peak before you can feed again. Just feeding to the rhythm of the starter should strengthen it. But try not to feed it once every 24 hours if it's peaking in 6-8 hours or feed it more.

As in it used to peak in 8 or 9 hours when fed 1:1:1, but after starting feeding it 1:2:2, it didn't rise mich at all the first day(maybe 15% or so). Yesterday after feeding, it haardly rose at all after 8 h, and it took 24 h for it to fall a bit (rose 100% this time after 24h, so an improvement I'm hoping).I just fed it again 1:2:2 and will keep an eye on the clock and rising times. I thought it was strong enough for it to not have problems if I increased flour/water ratio to mature starter mass.

Thanks for the tips, I'll be sure to try and feed it as close to the peak as possible.

If you feed your starter and for whatever reason it plays up just wait until it peaks and then feed again. Allow your starter to dictate when it should be fed. Don't attempt to speed it up by feeding too much too quickly. This will be counterproductive. Stay on 1:2:2 for now and see if it speeds up. Once you get it to 8-10 hours then you're on the right track. Make sure you're keeping it warm at 75-78°F. Otherwise expect it to take longer.

Hopefully it gets back on the right track soon, I'm out of tasty bread 😂

Anyone else get 80% hydration?  I think backing it down might help.

Taste your starter and report back. What temperature is it?

That's why I advised to keep it simple and drop the hydration. Could very well be part of the problem. I don't think the starter is far off, maybe a bit sluggish, but could be in the maintenance.

Thanks, others also mentioned this. Will cut down on water next time.

Feedback needed - sourdough loaf
My Foolproof Step by Step Recipe
Large Bubbles, Just Underneath the Crust
Deflating on the scored side
What is a seed starter?
END_OF_DOCUMENT_TOKEN_TO_BE_REPLACED